Late to the Party but Into the Spider-Verse

Home/Reviews, TV & Movies/Late to the Party but Into the Spider-Verse
Previous Next

Late to the Party but Into the Spider-Verse

Spider-Man: Into the Spider-Verse is one of the most creative takes on a comic-book film that I’ve seen in a long time, and not only that– it’s also just a downright fantastic Spider-Man movie. This movie came out a month ago. I am so, so late to this party, but party it is, and I don’t want you to miss it, too.

Spider-Man: Into the Spider-Verse is centered around the character Miles Morales (Shameik Moore), a kid from Brooklyn who has a close relationship with his Uncle Aaron (Mahershala Ali). He’s an artist and a good student, and has a nearly-normal teenage life, until the day he finds himself in the old transit tunnels below a lab. There’s a spider. You know the rest.

Or I thought I did, anyway. This film begins as a Spider-Man origin story, but quickly moves into its own premise: the multi-verse is colliding and multiple Spider-People have been forcibly brought to New York City. They can’t survive staying, so it’s up to the Spiders to figure out a way home. The main problem? Miles, in whose dimension they are trying to escape, has only been Spider-Man for about 2 days and hasn’t made the leap of faith into his powers yet. Can he find his way and get them home? Will one of them make the ultimate sacrifice and risk their own life to stay behind? (Go see the movie.)

One of the best things about this film is that it introduces new viewers to a whole slew of Spider-People who are well-known to comic readers but less-known to members of the general public. Most people have heard of “Spider-Gwen” aka Gwen Stacy’s Spider-Woman (Hailee Steinfeld) but Spider-Man Noir (Nicholas Cage) and Peni Parker (Kimiko Glenn) are likely new.

My favorite interactions by far were between Peter B. Parker (Jake Johnson), Gwen Stacy, and Miles, who developed a charming friendship despite the first two doubting our hero due to his lack of experience. The other Spiders provide solid comic relief but also do their own amount of villain-punching, and the whole experience is just so much fun.

I would be remiss not to mention that my personal favorite side character is Aunt May, voiced by Lily Tomlin. She had her own surprises and I loved this version of her character. I’m not going to say more. (Go see the movie.) 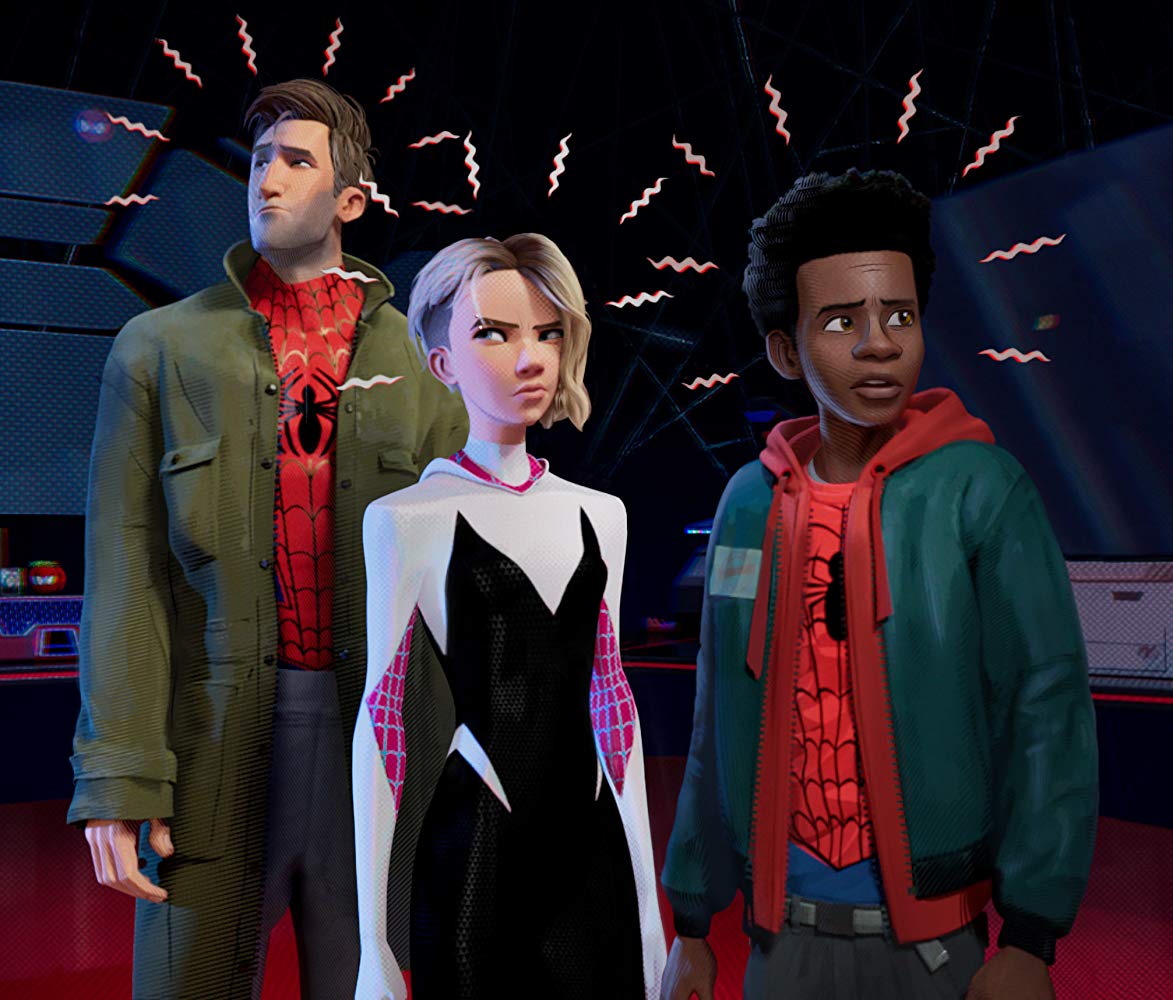 Not only are the characters fun to watch, but the soundtrack is fantastic (again, I’m SUPER late to this party but making up for it now!) and the animation style is fascinating. It’s like a comic-book has actually come to life, in every way from how the characters are drawn, to the occasional text on the screen, to the indications that Spider Sense is being triggered. None of that is distracting– it weaves the film together seamlessly into a single wonderful experience.

I will be honest and say that even though Into the Spider-Verse was on my intended list for December, life (and the holidays) got in the way and I never made it to the theater. Releasing December 14 put it right in line for the holiday movie-going bubble, though, and also for awards season. As of this writing, the film has already snagged a Golden Globe as the Best Animated Picture of 2018. It beat out Disney/Pixar’s Incredibles 2, y’all. One of the most anticipated animated films of the last decade came in second. That’s huge. And just look at this list of other award nominations and wins Into the Spider-Verse is stacking up. (Go see the movie.)

Do yourself a favor a snag a big-screen viewing of this one while it’s still in theaters. I’m sure it’ll be just as fun once it’s streaming, but interesting, creative films like this that don’t get box office support also don’t get sequels. This film deserves one.