In the market to begin a new epic fantasy series? Maybe something to help take the edge off once the final season of Game of Thrones airs on HBO? Luckily, there’s a new series that will fit the bill coming this February. Gates of Stone, the first novel in the Lord of the Islands series, weaves tales of folklore and custom into a comprehensive tale of magic and political drama.

Game of Thrones in Asia

Gates of Stone is being marketed as “Game of Thrones in Asia”. This both helps and hurts the novel. For obvious reasons, comparing a book to a well-known property can pull in parts of a dedicated fan base. Unfortunately, this can also backfire. As we all know, fans are a tricky bunch and can be quite fickle. Gates of Stone is an epic fantasy drama with political struggles at its core, much like A Song of Ice and Fire (ASOIAF).

There are additional similarities between Gates of Stone and Game of Thrones – in style, in scope, in brutality. And there are things that seem outright identical – a brutal horse-riding culture and a drinking, scheming, murderous woman with a desire to rule. These things provide a two-edged sword, to use a fantastical analogy. While it may lure some readers in, there is a sense that they’ve already committed years to a series and don’t need to do the same with a copycat series set in a different climate. Personally, I found the initial chapter introducing us to Katerina to fall into that category. I was dismayed. The book is large and dense and I just wasn’t sure if I wanted to read it. The brutality and the drug use were blatant and disturbing.

But, I kept reading. As a result, I was introduced to the other characters in this epic adventure. Occasionally, there are bits that call back a perturbing amount to A Song of Ice and Fire, but when it doesn’t, when Gates of Stones revels in its own story, it is brilliant.

The Individualism of Gates of Stone

The Gates of Stone is most engaging as it forges its own path. The mythology and the “ethnographic” studies are inventive and detailed, and there is an attention to detail in the variety of cultures mixing in the island nations. The book is mostly set in the Laut Besar, a region of numerous tropical islands reminiscent of Indonesia. There are pirates, cannibals, religious fanatics, merchants, slave traders, drug addicts, and more roaming the seas and islands of the Laut Besar.

Despite this vast area, the main characters and their story lines converge sooner rather than later. This provides a welcome contrast to the occasional plodding pace of ASOIAF. Because of this I look forward to the next installment of the Lord of the Islands. I’m eager to see Ketut and Katerina interact with each other. I want to know if Xi Gung will catch up with Farhan Madani, and I can’t wait to discover the remaining Keys of Power. I’m eager to see the ultimate impact they will have on the world if brought together. There is a lot to enjoy and look forward to in the series.

Gates of Stone will be released from Ace Trade Paperback on February 19, 2019. Preorder it now and let us know if you’ve decided to give it a read. 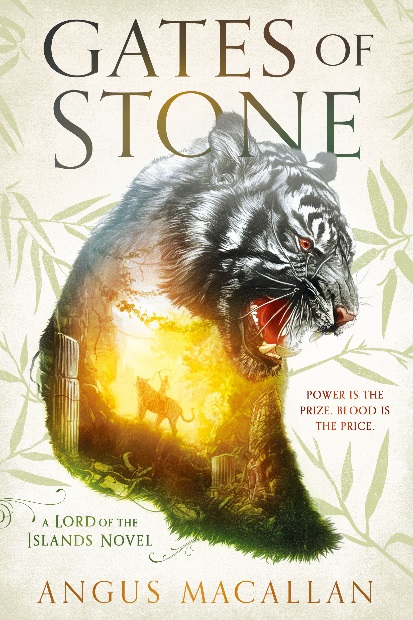 About Gates of Stone

In a world of blood and magic, a powerful epic fantasy begins…

AN EMPEROR’S DAUGHTER WHO WILL NOT BE DENIED
Just before her sixteenth birthday, Princess Katerina is refused her rightful place as heir to the Empire of the Ice-Bear—solely because of her sex. Determined to regain her inheritance, she murders the foreign lord she’s been ordered to marry and embarks on a perilous voyage to the lush, tropical islands of the Laut Besar in search of the vast wealth and power she needs to claim the Empire for herself.

A PRINCE FORCED TO TAKE A STAND
On a small island kingdom, Prince Arjun’s idyllic life is shattered when a malignant sorcerer invades, slaughters his people and steals the sacred sword of Jun’s ancestors. With his royal father dead and his palace in ruins, Jun reluctantly tracks the sorcerer and the magical blade far across the pirate-infested waters of the Laut Besar.

A SORCERER SEEKING TO DESTROY THE WORLD
Long ago the powerful relics known as the Seven Keys were used to safely lock away the terrifying evils of the Seven Hells. With Jun’s ancient sword in his grasp, the sorcerer Mangku has claimed the first Key, and begun his mission to unleash catastrophe upon the land.

As the destinies of these three entwine in the lawless islands of the Laut Besar, the fate of humanity hangs in the balance. For if the sorcerer cannot be stopped, the world itself will be unmade…

Angus Macallan is a pseudonym for Angus Donald, a British fiction writer and former journalist who is now based just outside London. He was born in China and lived, worked, and studied in Asia for much of his early adult life. He was awarded a masters degree with honors in social anthropology by the University of Edinburgh, partly based on his fieldwork in Indonesia, which led to a dissertation: “Magic, Sorcery and Society.” He also worked as a journalist in Hong Kong, India, Pakistan, and Afghanistan. Learn more and connect with Angus at www.angus-donald.com/