There is a reason that certain tales are as old as time. These stories become classic, beloved, and well known because of the core humanity within them. And often there is enough room to play with these tales to keep them intriguing. The Beast’s Heart by Leife Shallcross in another telling of the classic tale of Beauty and the Beast, this time from the Beast’s point of view.

A Return to a Classic

The Beast’s Heart, despite being from view of The Beast and not of Beauty, isn’t really all that original. It’s still the classic tale, and ultimately more true to the “original” version. In fact,  I felt like I was reading a version of a film I’d seen as a child.

Have you ever watched the 1987 version of Beauty and the Beast (part of the 1980 film series Cannon Movie Tales) starring Rebecca De Mornay and John Savage? Leife Shallcross’s telling of the classic fairy tale reminds me of this film, which is to say it is closer to the original, darker tale than the prettier adapted versions we are most familiar with.

There are less favorable reviews of the book calling out the voyeurism and manipulation present in the story. I can’t help but wonder if they understand that said traits are the whole crux of the fairy tale. Even so, there are veiled (and not so veiled) references to rape by the Beast’s father. It is a fear of this treatment of women that ultimately leads to the curse by the fairy.

The Beautiful Prose of The Beast’s Heart

While the story itself didn’t feel that original to me, it was a pleasure to read. The prose is beautiful. I was hooked by the language alone on the first page. The descriptive nature and the lilting words creates a magic that enhances the story. At times some parts became a tab overly descriptive, but it is nothing compared to some of those multiple page descriptive passages from Anne Rice. Overall, the writing (and that gorgeous cover) make this a wonderful addition to anyone’s collection of fairy tales, new and old.

The Beast’s Heart will be released (in the US) on February 12, 2019. Preorder it now. And let us know your thoughts on the re-tellings of our beloved fairy tales! 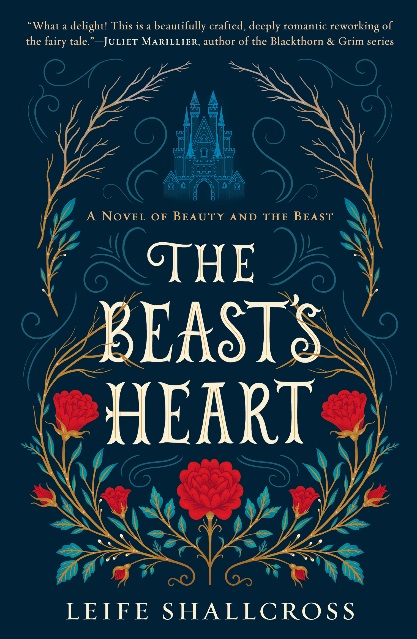 About The Beast’s Heart

A luxuriously magical retelling of Beauty and the Beast set in seventeenth-century France–and told from the point of view of the Beast himself.

I am neither monster nor man—yet I am both.

I am the Beast.

He is a broken, wild thing, his heart’s nature exposed by his beastly form. Long ago cursed with a wretched existence, the Beast prowls the dusty hallways of his ruined château with only magical, unseen servants to keep him company—until a weary traveler disturbs his isolation.

Bewitched by the man’s dreams of his beautiful daughter, the Beast devises a plan to lure her to the château. There, Isabeau courageously exchanges her father’s life for her own and agrees to remain with the Beast for a year. But even as their time together weaves its own spell, the Beast finds winning Isabeau’s love is only the first impossible step in breaking free from the curse . . .

Leife Shallcross lives at the foot of a mountain in Canberra, Australia, with her family and a small, scruffy creature that snores. She is the author of several short stories, including “Pretty Jennie Greenteeth,” which won the 2016 Aurealis Award for Best Young Adult Short Story. The Beast’s Heart is her first novel. Learn more and connect with her on her website, leifeshallcross.com, and on twitter, @leioss.