IGGPPCamp 2022: Explore Yourself: A Map of You!

IGGPPCamp 2022: Explore Yourself: A Map of You!

This year’s camp is about seeking adventure out in the world, but there’s also plenty to explore inwardly about yourself, too! In this activity you’ll create a map of an imaginary land that shows off what makes you tick. Think of it as a paper guide to what you love, what’s important to you, and what has shaped you.

Grab some markers, scissors, and cut up a brown paper bag.

If you don’t have a bag handy, tear some sheets out of a notebook and tape them together to create a 2 x 2 base.

Another option for the base of your map is wrapping paper! Just draw your map on the blank side.

WHAT GOES ON THE MAP?

To get your creative juices flowing, here’s a list of features commonly displayed on maps. Each one represents a facet of your personality/life.

Land name: envision your realm (is it an island, a country, or an entire world?) and give it a name that fits you.
I selected Bisonia, a play on my camp nickname (Nurse Buffalo).

Regions: divide your land into three regions with the following themes:

Capital city: name it after yourself! I stuck an “H” in my name because it looks cool that way: Khara

Smaller cities: add a city to each region with a name that matches the regional theme. Mine are:

Routes of transportation: pick your fave! I love train rides so I threw in the Crimson and Cream Railroad (named after my favorite college football team colors). Other ideas include highways, canals, airports, harbors!

Mountain: named for a challenge you’ve overcome. I added a whole range and named the biggest one Mt. Vandy, a tribute to nursing school.

Forest: named after a memory that has stuck with you. Mine is the Hot Thor Forest, after an inside joke that makes me smile.

River: named after anything that replenishes you. My favorite hobby lately is pole dance, so of course… The Pole River.

Landmarks: any variety of sight seeing spots named after things that you enjoy. Mine include the Courage Wolf Caverns (my favorite meme), a National Library (it’d be huge with sliding ladders like in Disney’s Beauty and the Beast), a music venue named after one I made for my Animal Crossing island, and the Pina Coladas 4 Eva beach where obviously, only the best drink the world will be served. 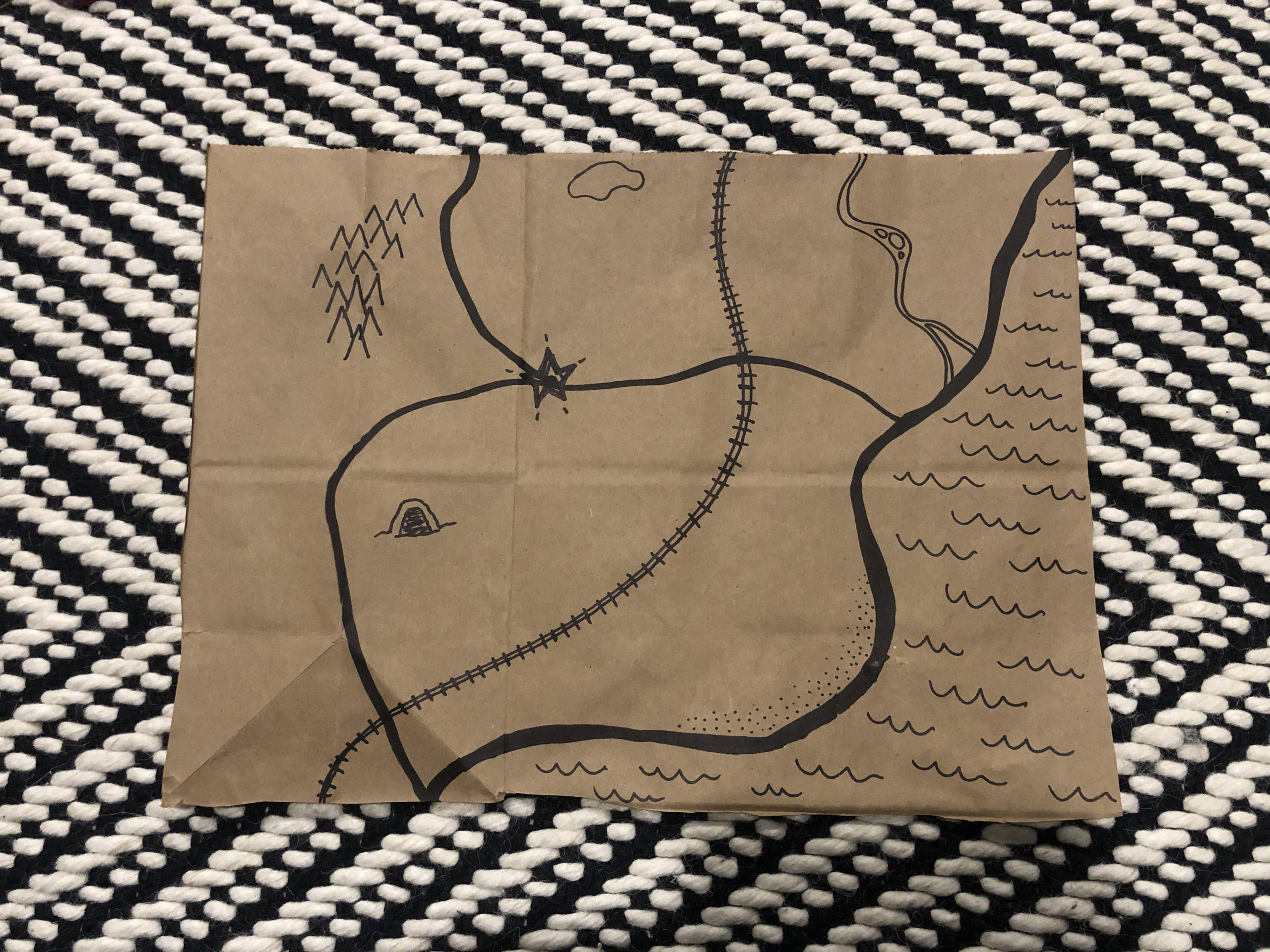 Think of this list as a starting point. Once you’ve added each of these features, feel free to run with the concept and add more details as you see fit.

TYING IT ALL TOGETHER

Bust out any craft supplies you like and give your map some color, texture, and visual oomph! The goal is expression, not perfection. I find a lot of joy in old school, colorful fold up paper maps. In designing my map, I tried to capture the essence of a crinkly, worn map that’s been shoved in a car glove box and used during dozens of road trips. And then added washi tape and glitter, because why the heck not! 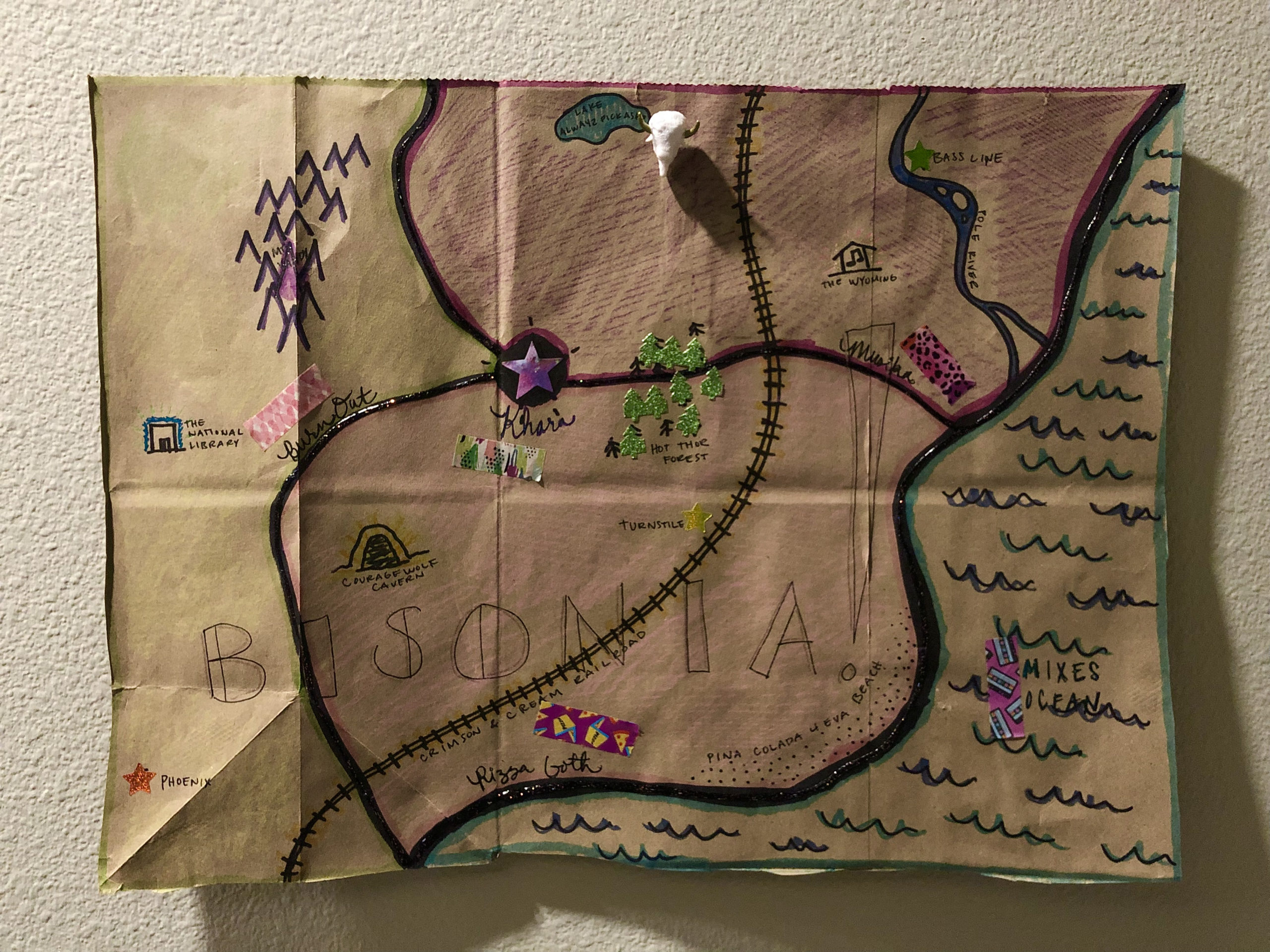 If this activity struck your fancy, please show off your fabulous creation for all to see – tweet @iggppcampnurse or drop it into #nurse-buffalos-sickbay on the IGGPPCamp Discord. Then come get to know your fellow campers by exploring out each other’s maps.

Contributed by Kara aka Camp Nurse Buffalo
Buffalo is a Counselor Emeritus (#cacaw #mockingjay4ever) turned Camp Nurse who LOVES iggle campers, but if you need someone to hold the bucket for you while you barf magical slugs, you’re on your own! Advice to new campers: don’t turn your back on your s’mores or they may fall victim to a wild Buffalo’s Chomp-and-Run. Troll her Twitter @iggppcampnurse – she checks it when she gets bored in the First Aid Cabin. DFTBA!