IGGPPCamp 2020: Fireworks in a Jar

IGGPPCamp 2020: Fireworks in a Jar

Sometimes it feels like there just isn’t enough cool stuff to do! Well at camp, there is always enough to do, and what would camp be without a good bit of Science magic? Today we’re creating fireworks in a jar!

A fun Science reaction is fireworks! When we think of fireworks, it’s those big, loud, color explosions during certain holiday festivals such as the Fourth of July in America or Burns’ Night in Scotland. We love the pops up color and the oohs and the ahhs. There are often so many complaints about fireworks and how loud and obnoxious they are, I thought it would be interesting to look for an experiment that would allow for a similar reaction without all the stress. I found one in the form of a fun Science experiment!

Having taught Science for several years, I love finding an experiment to do. Density experiments are some of my favorite. (To get a little technical, Density=Mass/Volume or D=M/V.) A popular density experiment is the seven layers of liquids experiment. You layer a bunch of different liquids and watch them separate into which density is more. Oil and water separate is an example of density.

This year for camp, I found a density experiment that can make tiny liquid fireworks! You just need a few simple household ingredients and you can watch the colors explode before your eyes! No need for protective gear or to thunder jacket your pets. Just follow the directions below and watch the colorful sights! 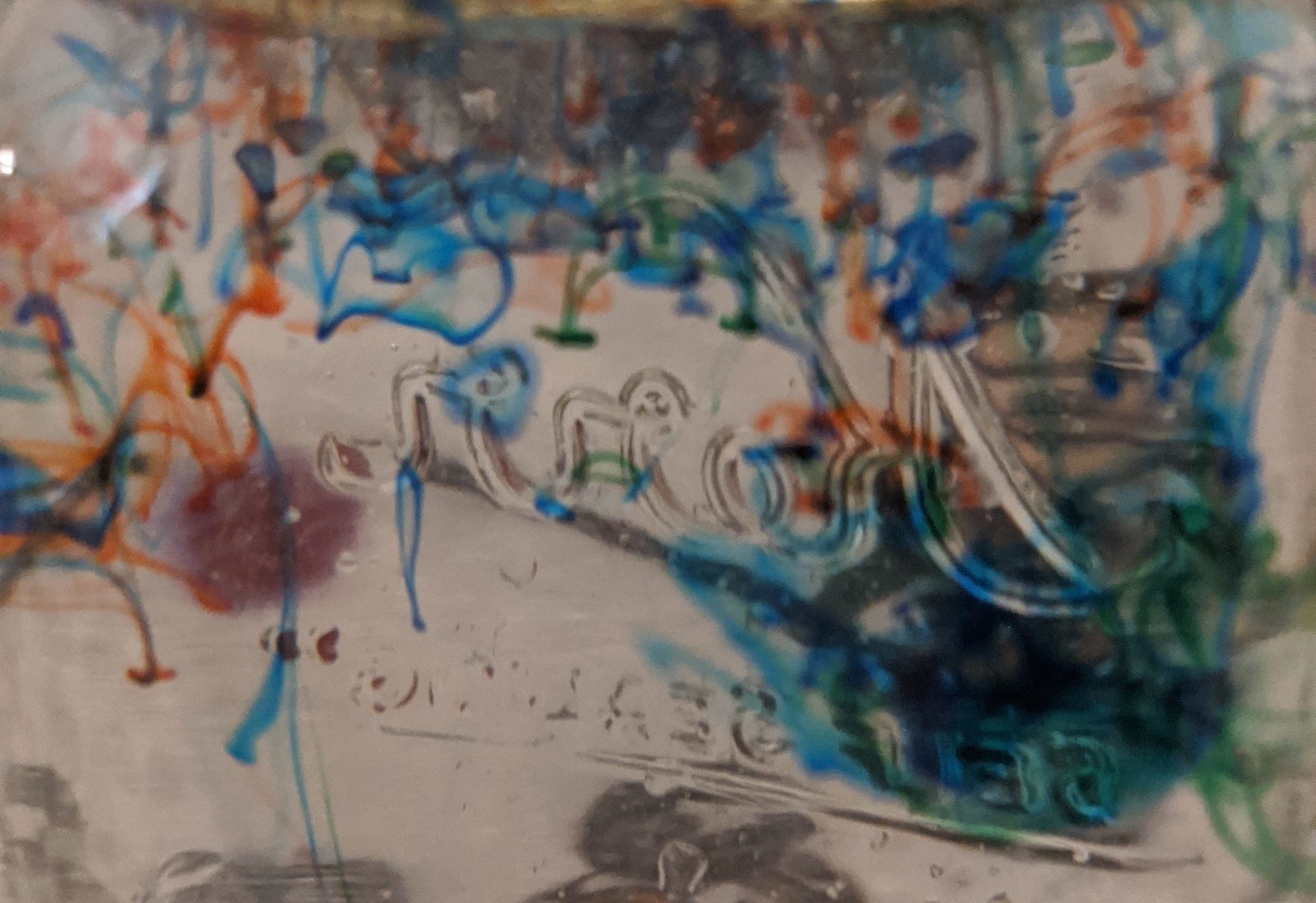 Fireworks in a Jar Instructions:

2. In the small bowl, dump 2 TBSP of Vegetable Oil.

3. Slowly add a few drops of different coloring to the oil. Somewhere between 4-6 drops and 2-3 colors.

4. Take the fork and mix up the drops into smaller droplets. 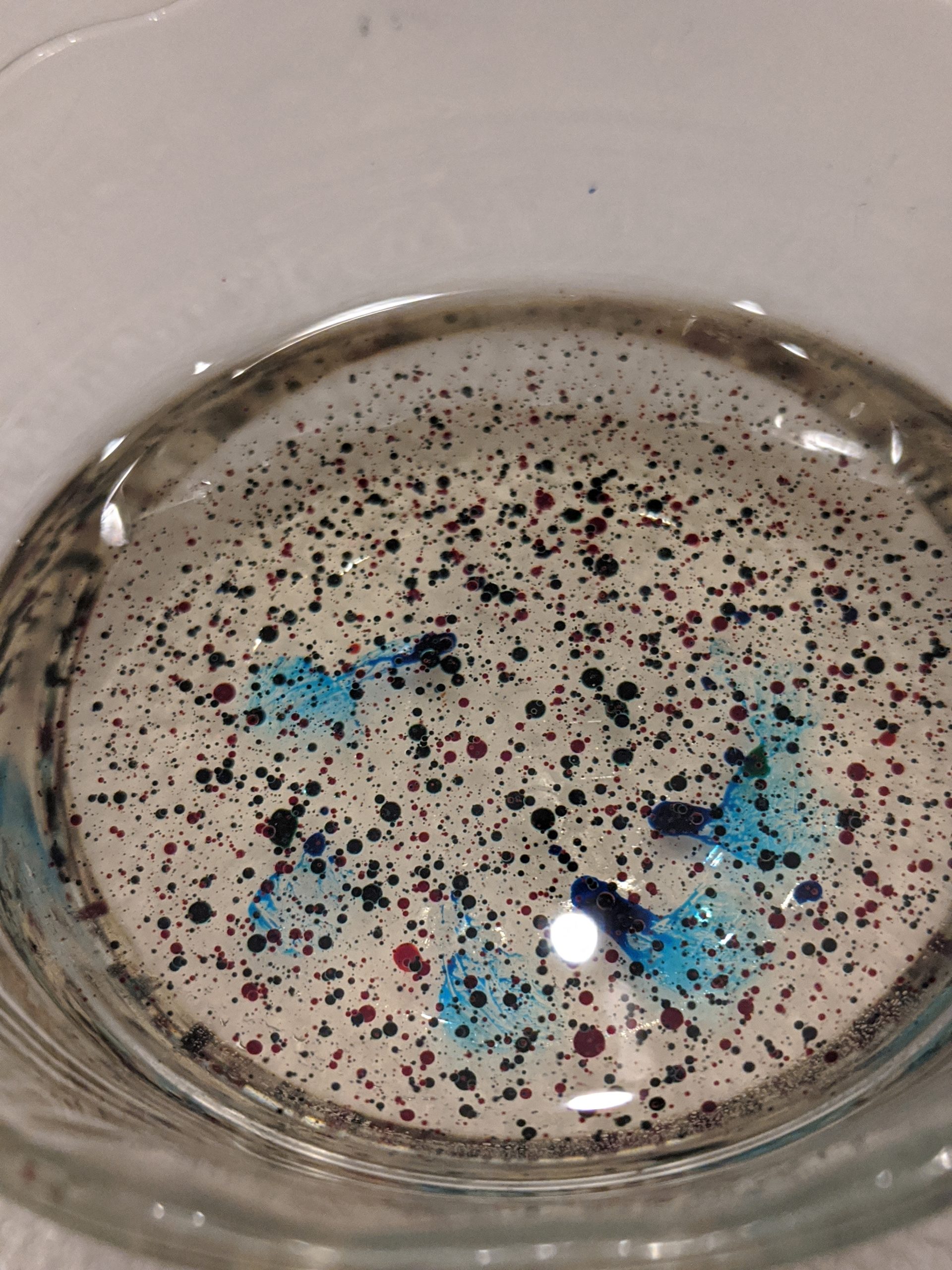 5. Slowly pour the oil into the water, letting it slowly settle on top.

6. Now watch as little explosions of color fall from the oil into the the water! Some people have suggested adding glitter or using some neon or glow-in-the-dark paints, but I found it didn’t work as well. You are free to experiment, because this is Science after all!

About the Author: Advent Geek Girl

Sarah Bonilla (Advent Geek Girl) now lives in a small town in Mideastern Wisconsin, but used to also live in North Carolina and Scotland. She is a sixth grade literacy teacher and runs a youth Tabletop Club. AGG is a mother, wife, foodie, and travel-enthusiast in addition to her primary geek addiction as a tabletop gamer. She geeks out over nuns, zombies, and all things sci-fi. She holds a Masters and partial PhD in Film Studies and used to be heavily entrenched in the film festival circuit as a critic and youth film festival curriculum developer. Sarah hails from House Organa and is a child of the 80s. Over the last several years, AGG took on the task of immersing herself in her previously suppressed love of all things geek, thus her handle. Find more about Sarah and her geek rising on her social media accounts or her blog at http://adventgeekgirl.blogspot.com.