Another year, another WonderCon in the books. WonderCon has always been one of my favorite conventions and this year was no exception. WonderCon is the little sibling of giant behemoth Comic-Con International: San Diego. Once upon a time it was in the San Francisco Bay, but since 2012 has taken advantage of the space and scheduling offered by the Anaheim Convention Center (apart from 2016 when it took place in Los Angeles due to construction at the Convention Center). The programming is excellent. The cosplay is epic. The exhibit hall is huge. And most importantly, the creator’s attending the convention are welcoming and accessible.

Read on for some highlights from WonderCon 2018.

From Mickey Fisher, the creator of Extant, this grounded new thriller follows Mara Kint (Sarah Shahi), a former hostage negotiator and expert on human behavior who became a college professor after facing an unimaginable personal tragedy. When she’s brought in to save ordinary people who have lost themselves in a highly advanced virtual-reality program in which people can literally live their dreams, she finds that in saving others, she may have discovered a way to save herself. The series also stars Dennis Haysbert (24), Jessica Lu (Awkward), Sendhil Ramamurthy (heroes), and Kathryn Morris (Cold Case).

This year’s WonderCon badges and lanyards promoted something new called Reverie, so I decided to check it out. Mickey Fisher introduced the sneak peek by explaining that he conceived of the concept after playing with Google Cardboard alone in his living room. He went on to explain the heart of the show is empathy and how to foster human connection in a digital age. 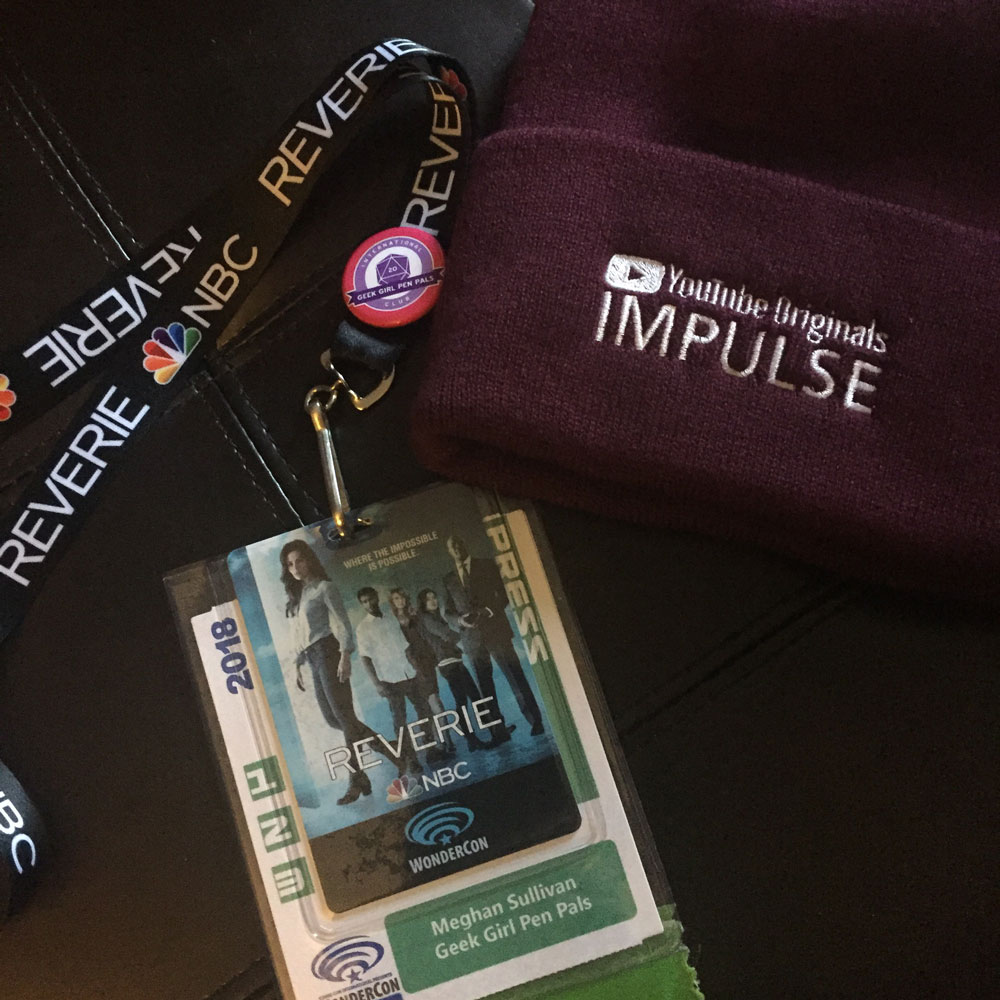 Reverie is reminiscent of both Ready Player One and procedural dramas. The concept is intriguing and I’m looking forward to seeing all the threads pulled together as the show develops. Also, the cast is fantastic and diverse. Mickey Fisher said, “Representation is important and just the right thing to do.” He admitted it was important to have diversity both in front and behind the camera to get a variety of viewpoints and storylines for the show.

Check out Reverie this summer on NBC.

An Afternoon with Patrick Rothfuss

There was no singing, but otherwise the program description was accurate. Pat began with a rambling story of trying to explain exactly what his solo panels tend to be like.  During the course of this explanation we learned about the “After Dark…” solo panel on the JoCo Cruise, the forgotten author’s note in the 10th Anniversary of The Name of the Wind, and even got a joke about not completing a third outing (clearly referencing the long awaited third book in The Kingkiller Chronicles). There was also a little aside about sex and priorities – in short, don’t be disturbed by the sex in the book, be disturbed by the murders.

Patrick Rothfuss is a lovely and entertaining human being. It’s always worth it to spend some time listening to him ramble about this and that. And let’s all agree that we really want to see that television adaption, with music from Lin-Manuel Miranda, come to fruition!

The Science of Pacific Rim

Nerdist’s Kyle Hill (Because Science, MythBusters: The Search) finds neuroscientists, biologists, and the films’ stars in The Drift to break down everything from linking brains to kaiju caloric intakes.

This panel was a delightful, math and physics filled discussion about the realities of giant robots.  This included discussion of the boggling claims of a “solid iron hull” and the specific amount of torque and energy required to raise the arm of a jaegar. It also included specific details about how many humans a Category 5 Kaiju would need to eat (assuming a reptilian biology, it’s only 5-6 a day) and how much urine one would produce (only about enough to fill an inch or two of an Olympic sized swimming pool).  The questions from the audience were also intelligent and fascinating. I think every attendee left with a desire to explore more science realities in relation to epic fantasies. 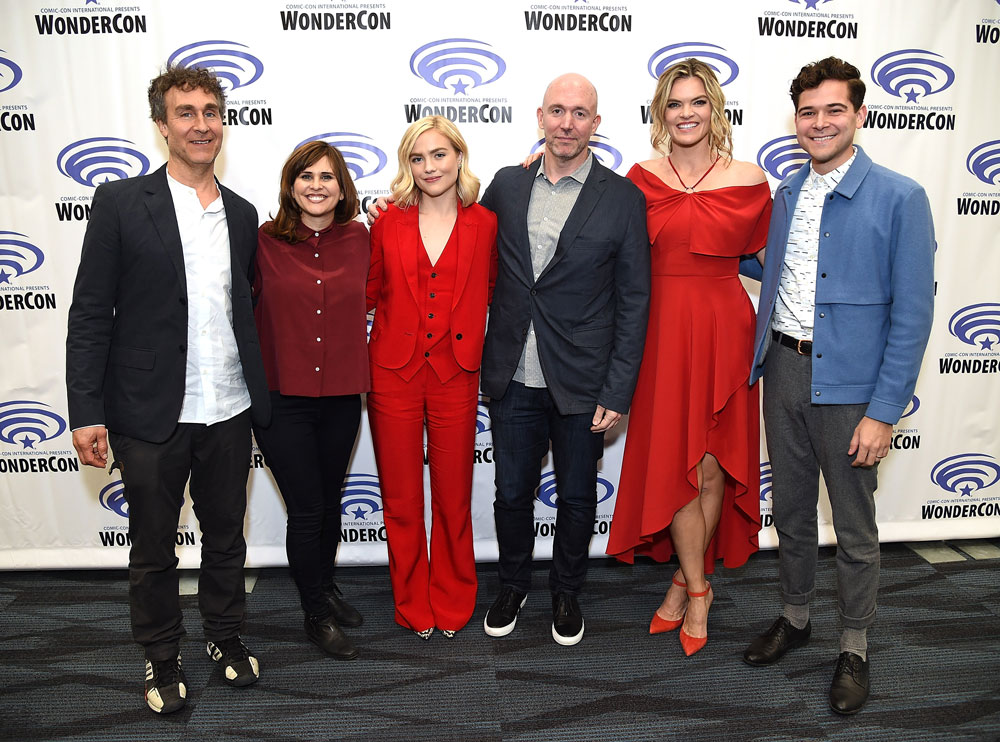 A clip from Impulse depicted the main character, Henry (Maddie Hasson), having a seizure as the result of her teleporting power. The panel discussion emphasized the raw and masterful depiction of the performance. Executive Producers Doug Liman and Gene Klein and showrunner Lauren LeFranc discussed the ability to get darker and more real on the YouTube Red platform. There is an assault that leads to the discovery of Henry’s power and it sounds like it will be hard to watch, but also lead to important conversations.  We will have to stay tuned to see the impact.

Impulse will premiere this summer but you catch watch the trailer now.

WonderCon is an amazing show for a lot of reasons. In addition to the fantastic programming, the show is accessible. It has not yet reached the overwhelming crowd capacity found in San Diego. That means, for the most part, you can get into just about every panel you want to see. Also, the large capacity of the Anaheim Convention Center, and the beautiful new North building, help attendees feel like they have space to breathe and decompress.  All of this also leads to creators being available and welcoming to fans. Panelists at many panels offered to chat more with fans outside the rooms after the end of their panels. Even popular DC Comics writer Scott Snyder offered to sign one item apiece to as many fans as he could in the brief time he had between panels. WonderCon still fully embodies the true spirit of celebrating fans and creators alike.

Overall, WonderCon 2018 was another successful show. If you missed out, block your calendar for March 29-31, 2019, so you can join in the fun next year.