The Name on Everybody’s Lips is Gonna Be…#Roxy: Review

The Name on Everybody’s Lips is Gonna Be…#Roxy: Review

Cinema has a fine tradition of redressing classic literature for the new generation in contemporary garb. Films like Forbidden Planet, 10 Things I Hate About You, Clueless, and She’s the Man sought to bring Shakespeare & Austen into the present. With the advance of digital communications, these stories have taken on new life, incorporating elements of our online lives. The Cinderella retelling Geekerella happens over text message, The Lizzie Bennet Diaries explores Pride & Prejudice as a vlog series, a tactic also used by Easy A to retell The Scarlet Letter. Continuing this fine tradition, comes 2018’s #Roxy, a modern take on the 1897 play Cyrano de Bergerac.

If you’re unfamiliar with Edmond Rostand’s play, its titular character, Cyrano de Bergerac (pronounced Seer-a-no deh Bear-zher-ack), is a musical and poetic genius amongst the French army who is best known for his unfavorably large nose. Cyrano is incredibly defensive of his perceived deformity and it has kept him from declaring his love for the beautiful Roxane. Roxane, an intelligent woman herself, is in love with the newest cadet, Christian, and asks that Cyrano befriend this handsome stranger. Cyrano finds, upon making Christian’s acquaintance, that Roxane’s interest is returned but that Christian is an inarticulate and dull-witted man. Cyrano is swayed to help Christian win Roxane’s heart by writing letters and communicating with Roxane on Christian’s behalf. This tale of pining lovers, masterful wordplay, and misunderstanding is brought to the screen in #Roxy by writer Tony Binns and director Michael Kennedy. At Bergerac High School, student Cyrus Nollen (Jake Short) is a notorious computer genius and hacker who goes by the handle @CyrNo. He has a very large nose and is sensitive about it, refusing to be photographed and bringing swift digital retribution on anyone who insults, draws attention to, or maybe even thinks about his nose. Cyrus is best friends with Roxy (Sarah Fisher) who is introduced to us as a bookworm and hopeless romantic.

With an electric smile, Roxy has beauty and brains, carrying heavy duty literature in nearly every scene. They’ve been friends since childhood and it is clear to everyone, except Roxy, that Cyrus is madly in love with her. Within the first few minutes of the film we see the first of many grand gestures Cyrus makes on Roxy’s behalf, protecting her, making her life easier, and supporting her however he can.

Roxy meanwhile has her eye on the new guy, a football player named Christian Newville (Booboo Stewart), with hair for days. She asks Cyrus to be her go between and get Christian to text her. Ever the hero, Cyrus agrees and makes the fix but finds himself tangled up in their budding relationship, acting as a speech-writer and counselor to the tongue-tied Christian and a confidante to Roxy. 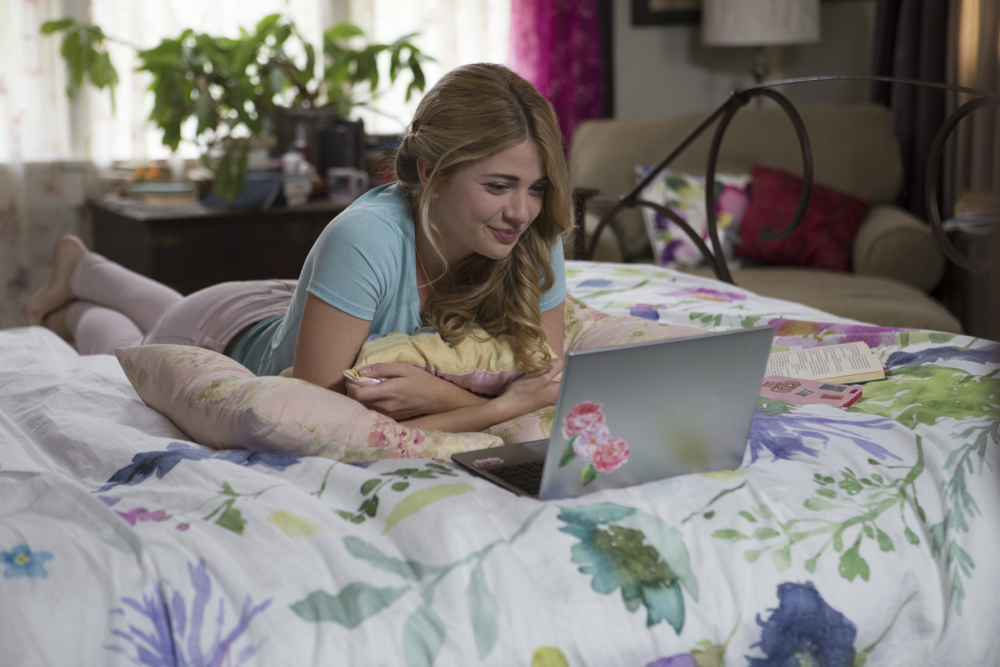 The film makes great use of modern communications to keep the deception going. Cyrus takes over the duties of texting Roxy for Christian. When Roxy begins to suspect that Christian is perhaps not as “soulful” and “articulate” as she surmised from text, the two boys take to a viral campaign, #ForgiveMeRoxy, and even make it onto Buzzfeed. Cyrus relies on technology as a crutch for his physical insecurities, using his l33t hax0rz skills to navigate his world, support his friends and crush, and, in times of crisis, as a mental shield for a better future. For Cyrus, the internet and technology are his pass to a better life, the quintessential nerd dream of future fame and money over the high school jocks. 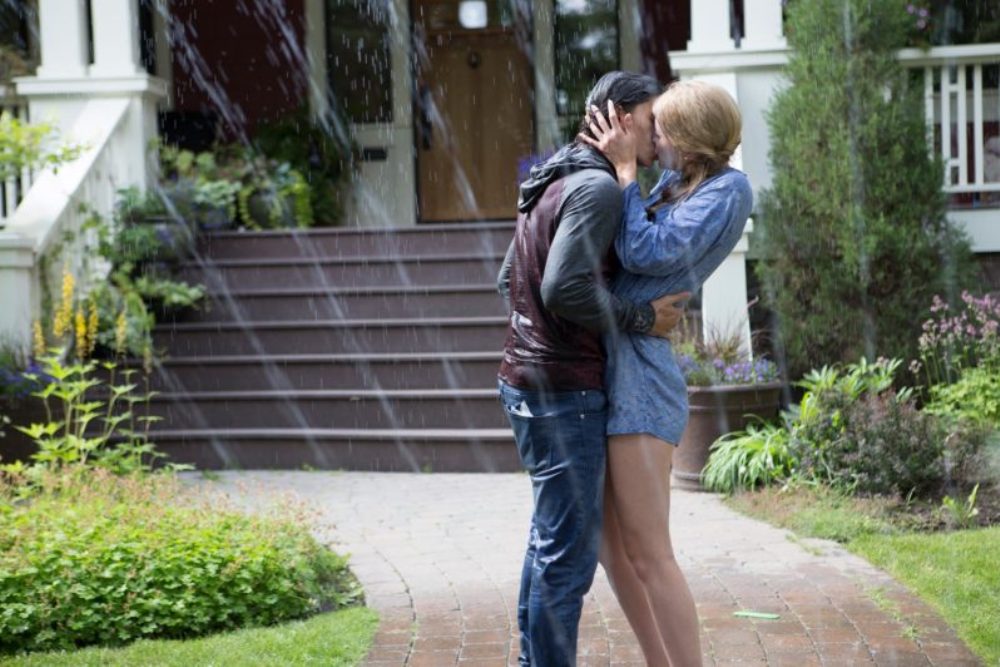 Unlike its source material, where pretty much everyone dies in war, #Roxy gets the happy ending we’re expecting. Everything about this movie satisfies expectations. There’s no new ground being covered here as far as teenage romance is concerned. The guy gets the girl, there’s reference to a classic 80’s rom-com (in this case Say Anything), and the rift between brain and brawn is healed by the friendship of Christian & Cyrus.

In this sense, #Roxy is a perfectly palatable film. It runs at a clipped pace, trying to fit a five act play under two hours, and the dialogue flows fast and smart. The film gets extra credit for not “fixing” Cyrus to fit the norm of beauty standards. Though the audience is privy to Cyrus’ hidden “nose job fund” the creators did not take an easy out where an injury could have necessitated rhinoplasty. For these things alone, #Roxy is worth an hour and forty-five minutes of your time.

Whether audiences are looking for it or not #Roxy has a lot to say about contemporary teen experience as digital natives. The inherent dangers of digital communities, things like catfishing, but also their inherent freedoms. At one point Cyrus, in the digital guise of Christian, texts Roxy that, “Technology’s a funny thing. I feel closer to you than I’ve ever been but still so isolated.” When you’re only words on a screen the words come out more clearly.

To quote another high school rom-com with literary roots, Never Been Kissed has this to say about disguise, “And it’s when she’s in costume that she can finally express her love for Orlando. See, Shakespeare’s making the point here that when we’re disguised, we feel freer. We can do things we wouldn’t do in ordinary life.” In #Roxy the characters are using their computers, their phones, and their social media to speak truths, self express, and take stands. 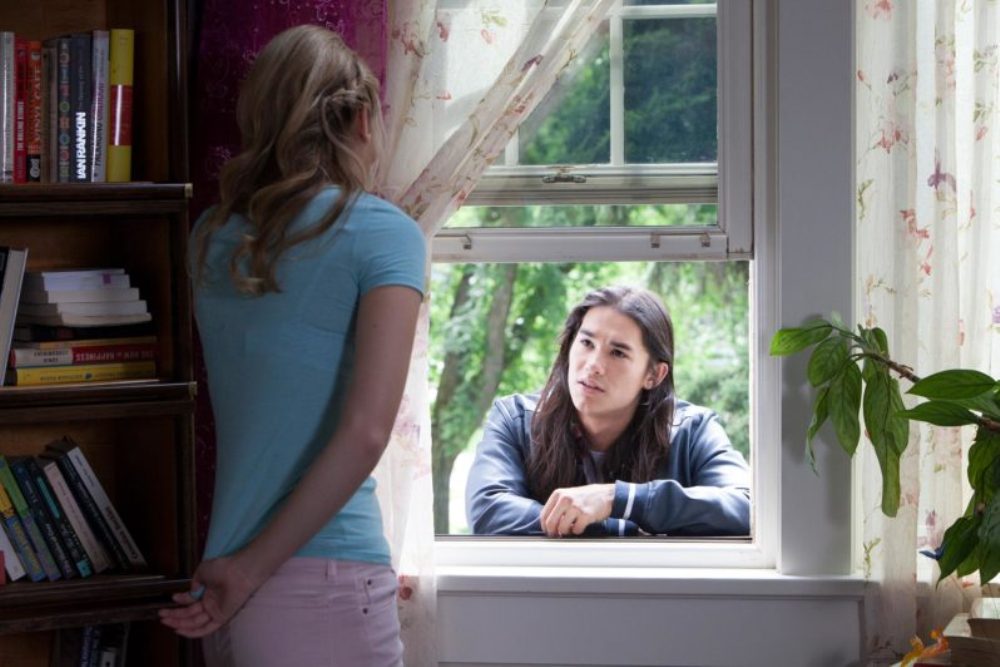 For the same token, we see how those freedoms can be taken too far. When Roxy learns that Cyrus is the one who has been writing her she is hurt most by the lie. Cyrus took his freedoms too far and in more ways than one. In the very act of defending himself from the slights and insults of bullies, Cyrus becomes a cyber bully. He uses technology as a shield but also as a weapon, wielding it to humiliate and attack. Sometimes the attacks are preemptive, uncalled for, or ruthlessly cruel. He becomes a digital avatar of the very thing he hates and has fought against his whole life.

#Roxy may not have answers for teens on how best to navigate online communities but I think it offers a dose of insight on how these digital landscapes can skew our perspectives. Roxy’s first flush of interest in Christian is easily swayed by a few words on a screen, blinding her to the obvious discordance with his actual personality. Cyrus finds that through words and code he has power over those he considers to be enemies but also over Roxy. Through texts and emails, he can manipulate her emotions and craft a world for himself where her feelings belong to him. #Roxy will not be everyone’s cup of tea but I think it holds weight in the echelons of young adult classic retellings. If you’re looking for some lighter fare in your movie line-up or you want to explore some Cyrano de Bergerac, you can find #Roxy available on Amazon Prime Video, iTunes, Google Play, and Vudu. Check out the trailer for #Roxy HERE.

What do you think? Will #Roxy be your first run-in with Cyrano de Bergerac? Will you be adding it to your rom-com shelf? How about a watch-along?! Sound off on Twitter and let me (@steenaleen) know what you think!

Keep your noses clean, kids! (<– Cyrus would not appreciate this joke.) 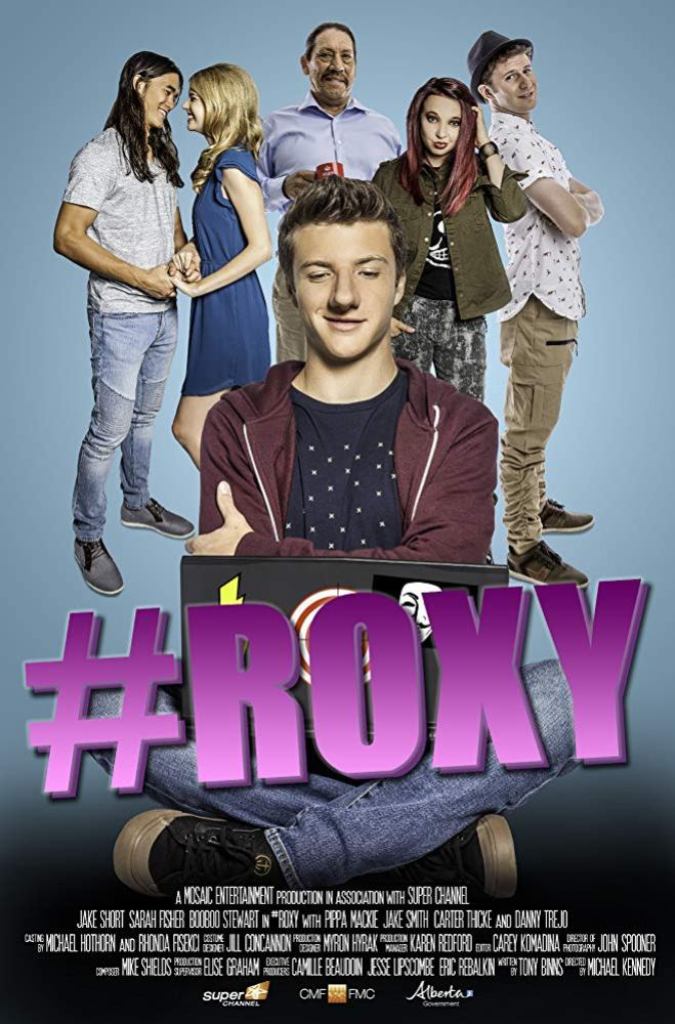