An Interview with the Creator of the New TTRPG ‘Turn’

Home/Gaming, General/An Interview with the Creator of the New TTRPG ‘Turn’
Previous Next

An Interview with the Creator of the New TTRPG ‘Turn’

A lot of work goes into the creation of a tabletop role-playing game. It’s not just about creating a story, but about creating a system that helps the players immerse themselves in the game. Today we’re going behind-the-scenes of Turn with creator Brie Beau Sheldon to learn a little bit about the team behind the final product, the process that they went through, and what Turn is all about.

Tell us a little bit about Turn.

Turn is a slice-of-life supernatural role-playing game about shapeshifters in small, rural towns. Players live the lives of these shapeshifters, who are supernaturally strong, have regeneration, and have superpowers, while they go about everyday things like their jobs, socializing, building relationships, and so on. However, they have to do it all while seeking balance between their beast and human identities, and trying to find community amongst mundanes and each other. It uses some simple dice mechanics using six-sided dice and narrative tools to help introduce complications and consequences into a game where you do what you intend to do, but it may take time, and it will always have consequences.

Tell us a little about the team that created the final product that your backers will receive.

I am the primary designer, and have done the majority of the core design work for Turn. My developmental editing team includes my husband, John W. Sheldon (he/him), who is also an artist for the project, and my colleague, Tracy Barnett (they/them), who is also our Kickstarter consultant. Lots of multi-tasking here! They both have put in work to ensure that the game is clear, functional, and engaging even beyond my initial work. I’ve also brought on an artist, a poet, and additionally an individual to write the essay on race and do sensitivity reads.
I’m a game designer, journalist, editor, and leadership educator, and I’ve been designing games for a bit now. I go by Brie or Beau (they/he). I run a site called Thoughty where I talk about games, interview game designers, and design my own games. I also work on projects like Turn through Daedalum AP, which is my business I share with John. John has been my rock throughout this process. Since I started working on Turn, I have gone through an undergrad and graduate degree and a brain injury, and he has helped me keep everything together. He’s a brilliant artist, and is illustrating the human roles in the game in the perfect style I envisioned, plus doing our layout. He’s also responsible for the video for the Kickstarter!
Tracy is an experienced designer and creator in indie games, including Iron Edda Accelerated, One Shot, School Daze, and a variety of other projects. They have an eye for customer needs, plus a lot of enthusiasm for making games that are fun! Their perspective on the project is really useful, and they rescued me a bit by stepping in as consultant when we had to change our schedule and I needed help.
My other artist is Rhis Harris (they/them), who is a really wonderful fine artist and their animal designs are gorgeous. They manage to make things just the right degree of real, with such an eye for color and style. I really appreciated that when working with them, I didn’t have to try to explain how a shapeshifter might behave physically – I honestly think their talents lend better to that than I could explain!
Our poems are by A.J. Odasso (they/them), author of Lost Books and The Dishonesty of Dreams, who will contribute more poems when we fund. A.J. and I have been friends since I was 11 years old, and they have consistently written poetry that arrests my heart like nothing else. They’re my favorite poet, and their experiences growing up in some shared environments to me in small-town Pennsylvania made me sure that they would know the feeling I wanted to impart. The poem that starts off Turn’s Kickstarter will be the opening poem of the book, and it captures my memories and thoughts so perfectly.
Alicia Foster-Scales (she/her), a.k.a. The Writ Witch, is our race essayist and sensitivity reader. She did a wonderful job with the sensitivity read, and her essay is so great and passionate. Alicia is a doula and an activist, and a person who has passion for fairness. Her perspective has been truly valuable! 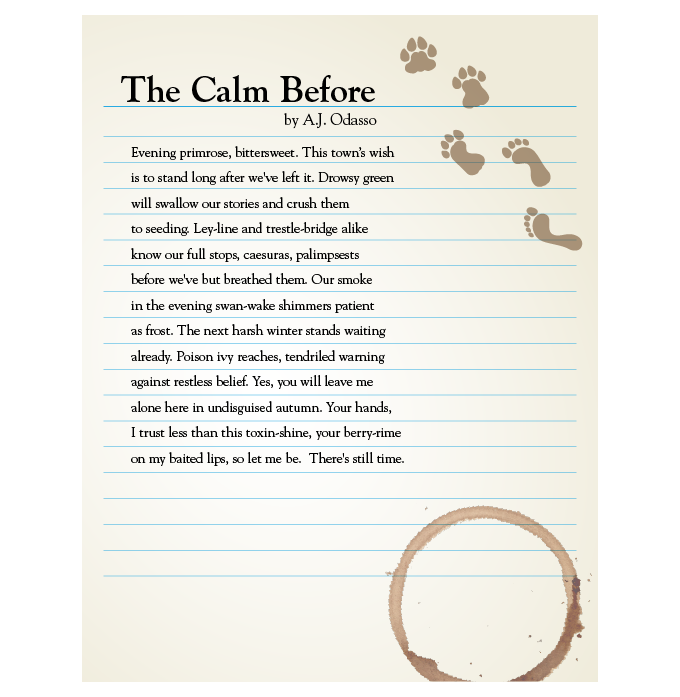 What part of Turn are you most eager to see players getting to experience for the first time?

There are so many things! I think that the experience of playing in beast form after you’ve spent a bit of time in human form is always very good, and town building! Both are so much fun for me. Town building was the first piece of design I solidified, and the experience of changing forms in different ways is fun and exploratory!

What is your favorite thing about Turn?

I would say my favorite thing about it is that it’s a game I designed for me, to meet my wants and needs. I’m really particular about games, and Turn meets a lot of things I want and need – it has quieter drama, it’s slice-of-life, it has shapeshifters that can turn whenever they want, it emphasizes agency, and you get to create the world in many ways. It’s hard to choose just one thing beyond that!

How much prep time do you anticipate a new Town Manager needing before being able to run a game?

Reviewing the Town Manager chapter; the opening section on small towns, how shapeshifters work, and tone and focus; the player principles; and Some Things to Explain are the key tasks to perform before running. After that, you just follow the step-by-step for the first process. There is obviously more material that helps with running the game, but reading everything isn’t necessary to get the first session going. As everyone reads at different speeds, this depends on how much you can read in what amount of time, but it’s not a significant time investment. There is more investment done between sessions where you build on the town’s story by creating NPCs and helping to craft narratives, but a lot of the energy is really in play, where you create NPCs on the fly and help develop the narrative alongside the players.

Do you have any expansions planned for the game?

As of the moment, we have some stretch goals in mind that will expand the town types, add roles and archetypes, and include essays from different places and experiences. My hope is that after the Kickstarter, even if those goals don’t fund, we can find a way to make those stretch goals happen! I also hope to personally, and through other designers, expand the roles, archetypes, town types, and more! How did you get involved in game design and development?

I guess you could say I got a little frustrated! I was unhappy in my gaming group at the time, and started writing for Gaming as Women about my experiences. From there I learned about the game design scene, and spent a lot of time trying to find the right “in.” I met a lot of people through Google+ and they helped me find work doing games, while I started designing my own games at the same time. It took a lot of networking, time, and energy, but I was pretty dedicated to it. And now it’s a large part of my full-time work!

Do you have any advice for aspiring TTRPG designers?

Be honest with yourself about your limitations, but  don’t ever let anybody tell you that you can’t make the game you want. It will take work, maybe some hard decisions, and sometimes a lot of time, but if there’s something you really want to see in the world, you can make it happen!
Oh, and definitely take breaks and hydrate when you get in the groove. It can burn you out fast!

At Geek Girl Pen Pals, we pair geeky pen pals based on their “Top 5 Geek Loves.” What are the top 5 things you geek out about?

In no particular order:

Last but not least, are there any other projects of yours that you think our community should check out?

I would absolutely love if you took a look at my leadership show, Leading with Class! I talk about leadership through the lens of roleplaying games. I also have a site called Thoughty where I feature tons of other designers and talk game design theory. And last but not least, you can check out some of my other games like a team project I did, Of the Woods: Lonely Games of Imagination, which is on DriveThruRPG and my other games including the Let Me Take a Selfie collection and a collaborative project by non-cisgender masculine people, Behind the Masc here. You can find Script Change there too – it’s my content, consent, and safety toolbox, and is used in Turn.

If you are looking for something a little different in the TTRPG community, Turn sounds like a great addition to any table! Thanks for taking the time to talk with us!