The entertainment industry is full of stories about the end of days, about the destruction of the planet and the human race, and has turned such tales of apocalypse into a cultural obsession, where heroes like Katniss and Triss fight against the odds to try and survive on the other side of anahilation. Disney’s latest summer family movie, Tomorrowland, sees all of your YA dystopias and the news stories about natural disasters due to humans’ impact on Earth, and raises you a solid, “Well, what can we do to fix it?” This is the premise of the movie, to inspire solutions rather than dwelling on problems, and to try and bring back a sense of wonder into the scientific conversation, at least on a Hollywood level. 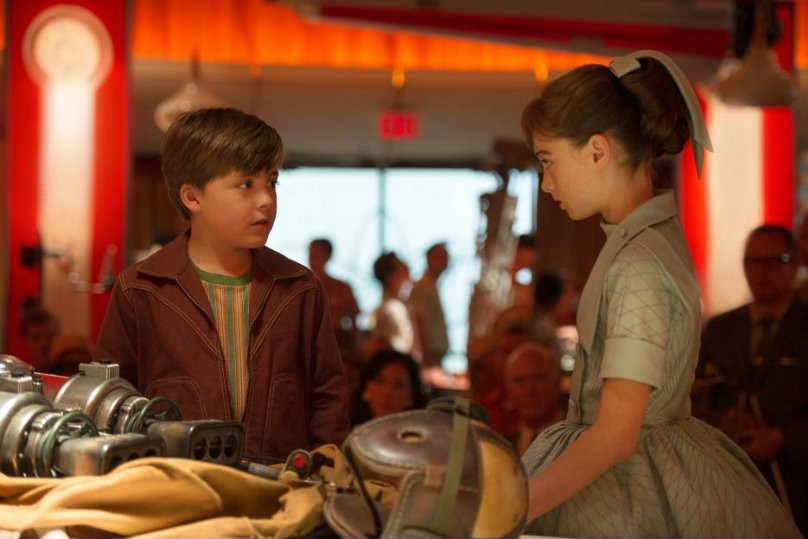 The film opens with the 1964 World’s Fair in New York City, a time that seems a world away from where we are now. That World’s Fair was a bright place full of innovation and an optimistic look at what the future could hold. You can see some real snapshots of the fair thanks to the NY Daily News, and the film does a pretty good job of bringing that slice of time to life. In it, a boy named Frank Walker (played by Thomas Robinson) has brought his not-quite-functional jetpack to the invention competition. Though he is turned down for the prize, a girl named Athena (Raffey Cassidy) who looks to be about his age hands him a small pin with a “T” on it and invites him to sneak along after her group. He follows them into Walt Disney’s “it’s a small world” ride (which was built specifically for the fair as a salute to UNICEF) and finds himself swept off to an incredible place where the technology of the future actually exists. 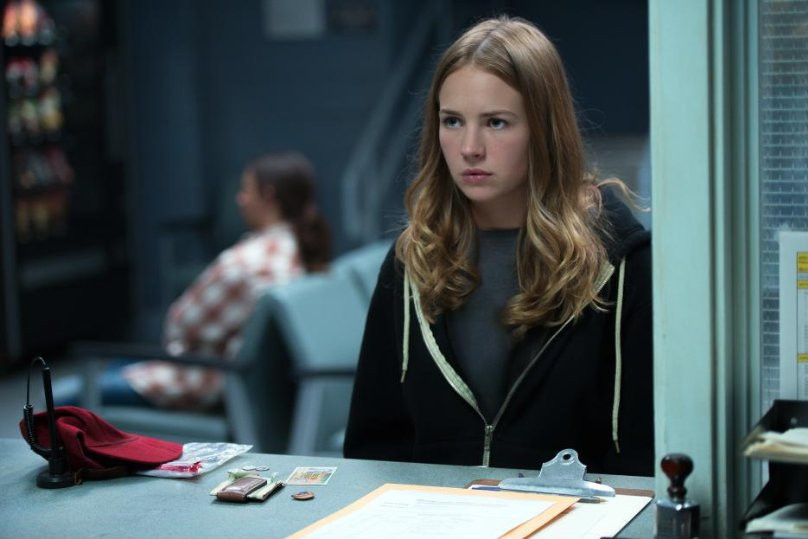 At this point the film jumps ahead in time and narrator. Casey Newton (Britt Robertson) is a teenager living in Florida with her father, a NASA engineer, and her younger brother. She has been working for perhaps months to sabotage the deconstruction of the NASA launch platforms, partly to save her father’s job but partly because she has wanted to go to the stars since she was a child. She is your typical idealist, the student who asks her teachers (all of whom seem lock-step in telling their classes that the world is nearly over) what they can do to fix things. Finally caught and arrested for trespassing, when Casey makes bails among her things is a strange little pin with a “T” on it. When she touches it, she finds herself transported visually to another Place, though she seems to stay solidly in the same physical space. Needless to say this results in some serious misunderstandings, but nevertheless Casey is enthralled by the amazing things she sees. 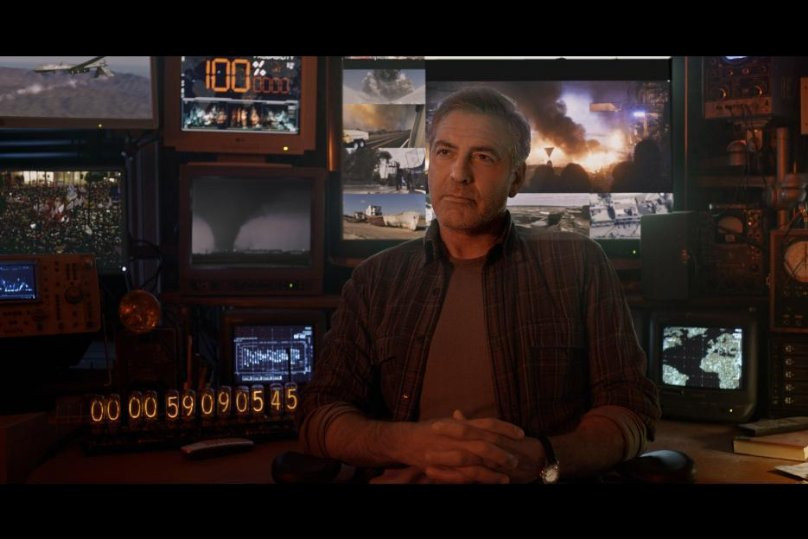 Determined to find out more, Casey embarks on a journey to learn what the pin might be, and to find a way to get to the Place she saw for just a few minutes. She encounters Athena, who hasn’t aged in fifty years, and who takes her to the adult Frank Walker (George Clooney). Frank is now living alone in an old house with an ominously counting down clock and every disaster-based news story streaming you can imagine. They are forced to flee from attack robots who, for some reason, want to seek and destroy Athena and anyone with whom she has contact, and wind up on a journey to find their way back to the other Place and to fix something that has gone “wrong” with the future. 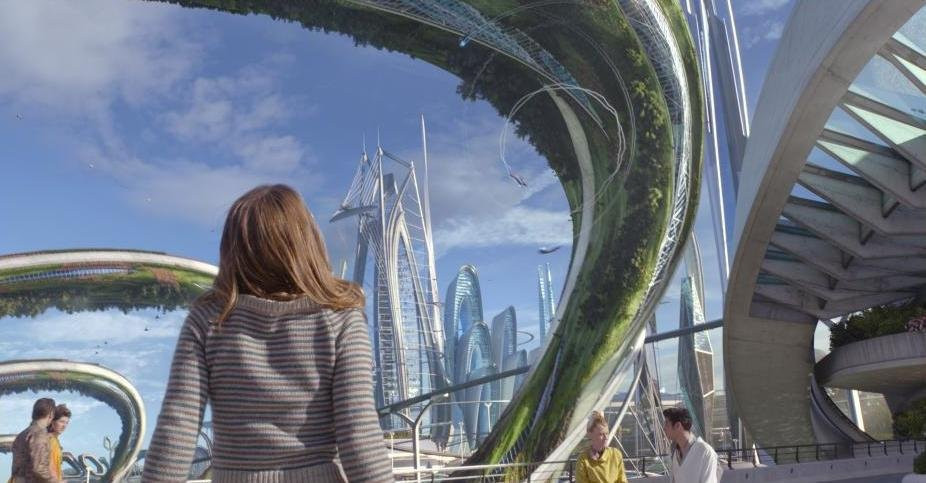 This film’s strengths lie largely in the places where it creates a sense of wonder for the audience. Frank even asks Casey at one point why she has to know how something works, can’t she just be amazed? And there is plenty to marvel at in this one to be sure. This future is bright and shining, the combination of 1960s futuristic/mod aesthetic and the optimism of the 1980s. Honestly it reminds me of visiting EPCOT or Cape Canaveral as a kid in the 80s and just being in awe of everything. Seeing a movie with a healthy dose of optimism and hope is refreshing after all of the dark and gritty futures we’ve been presented for so long. 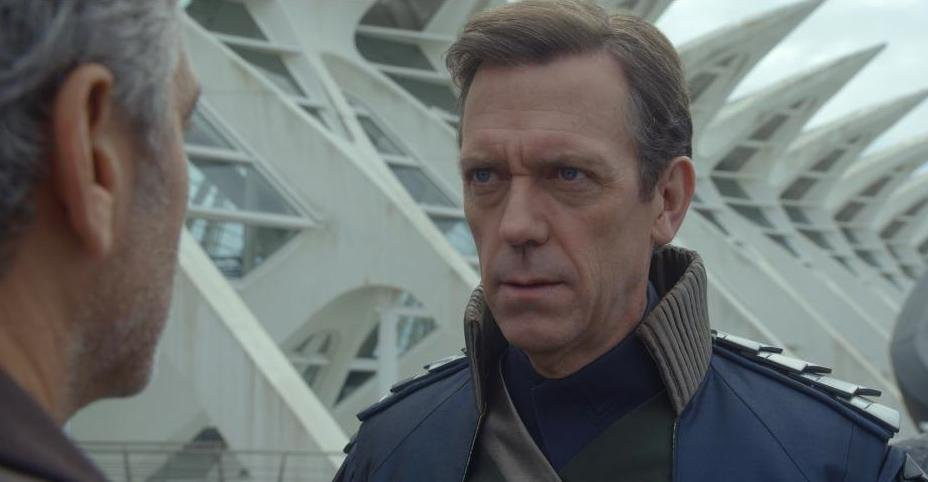 Where this film lost me, however, was in the final act. For all of the time spent setting up a marvelous location and building a world that seems to be fueled by wonder and invention, the climax felt entirely too quick, like dropping off a cliff right at the end. I also wonder if the final conflict wasn’t ultimately too big for this movie to handle, and if it bit off more than it could chew for what was plausible within its own framework. I enjoyed nearly everything up until that point, though, and wish (after we’d already sat through two hours) that we’d had an extra ten minutes to really do justice to what was happening. And I’d have liked more from Nix (Hugh Laurie) once the heroes finally encounter him. 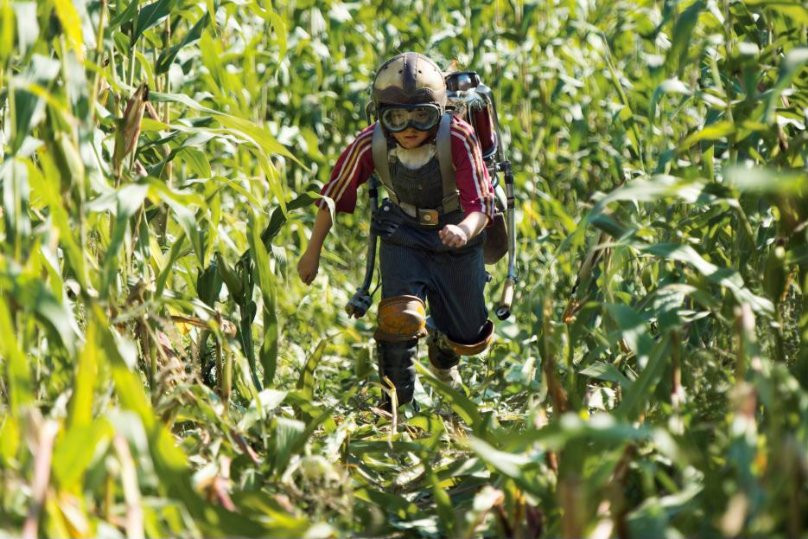 The only other thing that truly nagged at me was that neither of the main characters, neither Frank nor Casey, ultimately solve their problems for themselves. Neither seemed to me to really earn the level of importance laid on them by those around them. Each has a challenge that is ultimately solved by someone or something else, though without the emphasis on teamwork you might expect. (For instance, young Frank’s jetpack is made functional by a robot, and not by Frank himself.) At some point, I wish that one of them had developed enough to finish a project on their own. I will also say that, while endearing, it was strange to watch the adult Frank’s relationship with Athena play out, mostly because it was George Clooney talking to a character who looks to be about twelve.

Overall I would give this one about a 6.5 out of 10. It’s a good matinee choice, and certainly full of adventure and wonder if you have kids in your life, but I felt like I’d been left hanging at the end.

Have you seen Tomorrowland? Let me know what your take on it is in the comments below!