With multiple franchises to juggle and an extensive cinematic universe, Marvel still manages to deliver a solid superhero movie in The Amazing Spider-Man 2. The film is at different points exciting and endearing, and sets the course and tone of the Spider-Man story for the future.

The movie opens with a flashback to Peter Parker’s childhood and his parents Richard and Mary. The couple, in obvious distress, leave their son with his aunt and uncle and board a jet. They talk about escape and uploading files but all too soon tragedy takes them, leaving behind an orphan and a mystery. 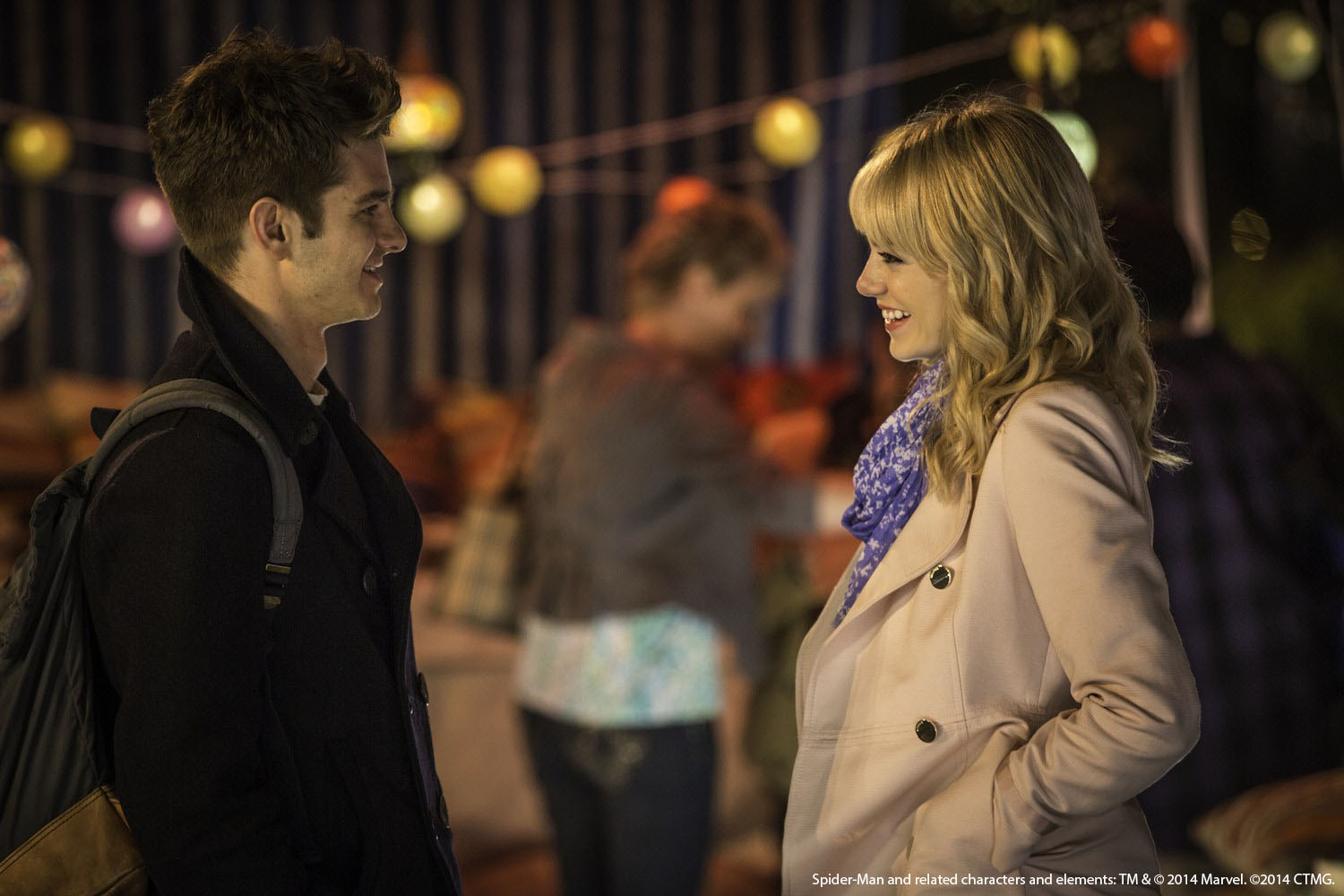 Before we can ponder too long, present-day Spidey (Andrew Garfield) swings onto the screen in a rush of web-slinging action, foiling a terrorist plot on the way to his high school graduation. He and Gwen Stacy (Emma Stone) are facing their futures and the common dilemma of high school couples everywhere: hold on or break up. Of course, their relationship is complicated by Peter’s secret life and his guilt over her father’s death, but their feelings for each other are clear and weave throughout the film as Peter’s desire to protect those he loves motivates all of his actions. 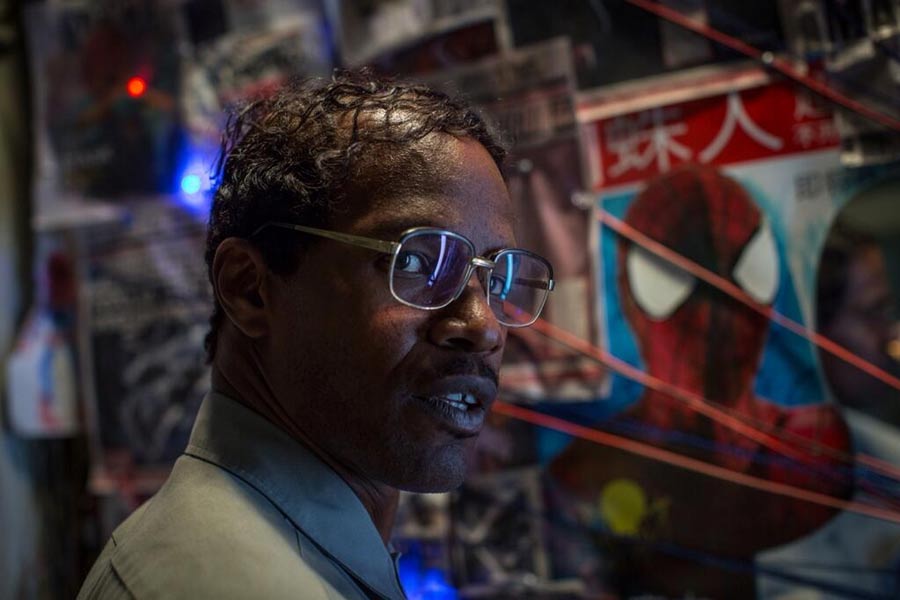 In the meantime, we are introduced to Max Dillon (Jamie Foxx), an employee of Oscorp who is highly intelligent but thoroughly ignored, his ideas stolen and his life deemed worthless. He is fascinated by Spider-Man to the point of obsession after being saved one day on the street. He helps run the power grid for the city, and for Oscorp, which involves tanks full of electric eels. A workplace accident sends him plummeting into one of the tanks and what emerges has all of the built-up resentment and none of the meekness Max once possessed; he is transformed into Electro, a glowing blue, electricity-consuming baddie with a chip on his shoulder directed at Spider-Man. 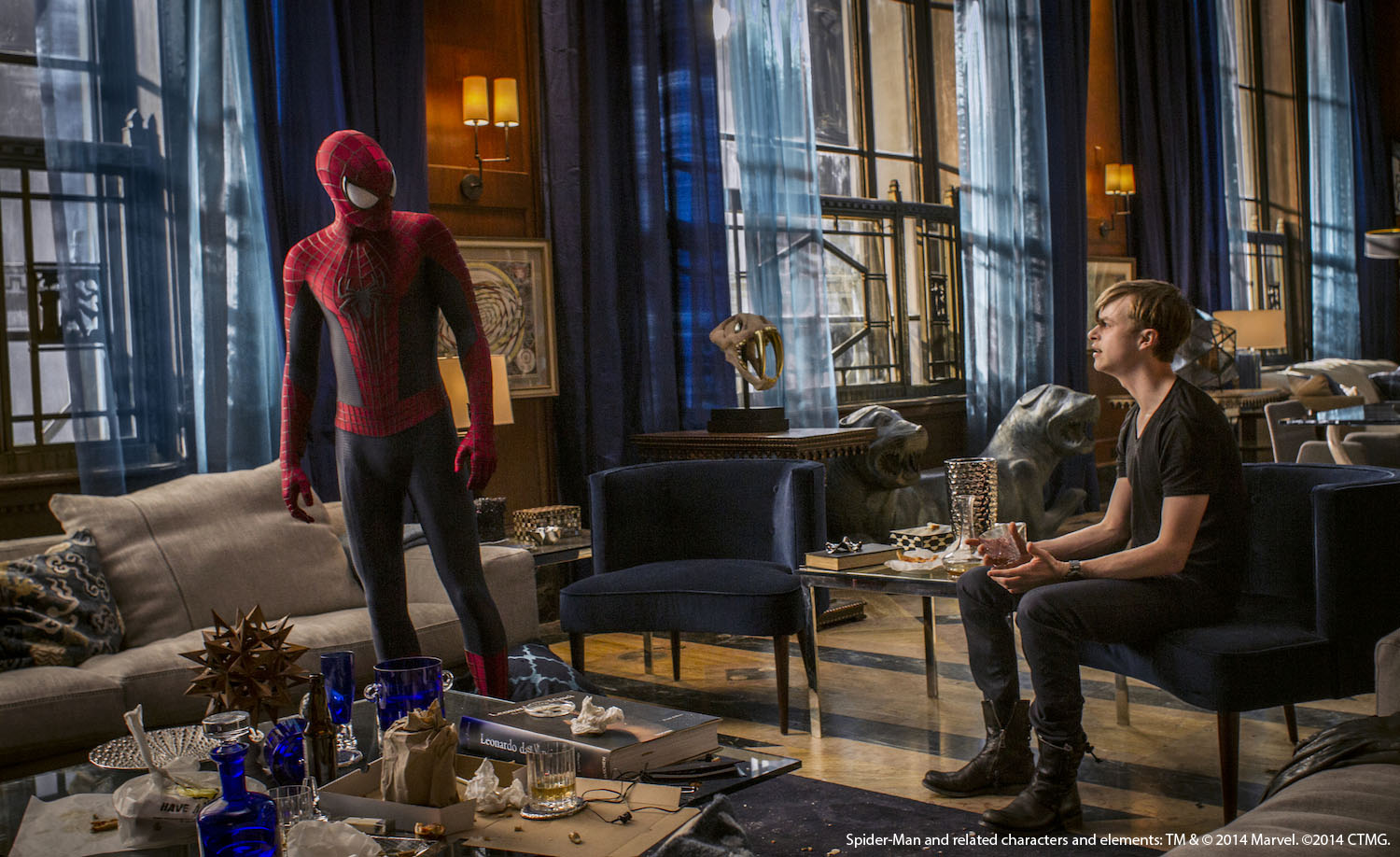 The last major player in this film is Harry Osborn (Dane DeHaan), back in town after the death of his father, and also dying of a genetic disease. He learns that his father was doing animal-human DNA experimentation and that spider venom may be the key to his cure, which leads him to reach out to Spider-Man via Harry’s childhood friend, Peter. Fearing for Harry’s safety, Peter refuses, and in so doing gains another enemy.

Danger is brewing at an alarming rate while Peter searches for answers about his own past and Oscorp’s involvement, as it seems to be the source of all of his trouble, all while Gwen prepares to leave for England on a scholarship. His life is spinning ever forward toward a climactic battle that will pit him against danger and his own emotions.

No matter what the iteration, Peter Parker always struggles between his desire for a normal life and the responsibility (and thrill) he feels from being Spider-Man. This inner conflict inevitably leaves him unsatisfied at best and heartbroken at worst, and this film is no exception. We relate to Spider-Man because just when things seem at their best, the bottom drops out and leaves us feeling like we’ve missed a stair, the tightening in our gut telling us life will never be the same. This gut-wrenching experience is what defines and ultimately motivates Peter to do great things with his life. Overall this movie does a good job setting up subsequent sequels to explore the fallout of its events. Villains are looming in the near-distance and Peter will have to face them head-on or leave New York City to the mercy of monsters.

The things I liked best about this movie were the relationships. Aunt May (Sally Field) is an especially strong character; her love for Peter and her view of him as her own son shine through. Aunt May is fierce and protective, but loving and honest, and the film benefits from her presence. Peter and Gwen have natural chemistry and you can’t help but root for them to figure things out together.

I did find myself pulled out of the action a few times wondering about the extreme destruction happening in the city (which is actually addressed within the movie– people are upset at Spider-Man because taxpayers are having to clean up after him), but really I kept wondering what happens to all of the web he leaves behind. Is New York covered in vine-like white ropes of spiderweb? Does someone go back and clean it up afterward? I want to know these things.

As always, Marvel has left a bonus scene for the credits: it is unrelated to the movie, and there is only one of them, so if you don’t want to see a scene from the next Marvel movie, you don’t need to wait.

Overall this is a worthwhile addition to the Spider-Man story, and I’m interested to see where they take us next. This Spidey is definitely an action type and the films have been more flash and less brooding, though of course with any Spider-Man story there is going to be some darkness. If you’re a Marvel movie fan, I recommend this one for your next movie night!