(Apologies for tardiness… being out of the country threw off my groove.)

Cap is back in the latest installment of the Marvel Avengers arc, and Steve Rogers (Chris Evans) is looking much more on top of things since we last saw him in The Avengers. Captain America: The Winter Soldier opens with Steve in Washington D.C., working for S.H.I.E.L.D. on one of their highly trained tactical teams. Unlike the team from the TV show, “Agents of S.H.I.E.L.D.,” this team is mostly highly trained soldiers with missions such as freeing hostages, which we see them set out to do.

Steve’s team includes Natasha Romanoff, aka Black Widow (Scarlett Johansson), who is as fun to watch as always, taking out the bad guys and following her own set of orders. We find out that the Captain is uneasy in his role, and in his lack of peers (most of whom are deceased or, like Peggy Carter, are not far behind). He is frustrated that Director Fury (Samuel L. Jackson) doesn’t tell him the whole truth, but then disgusted and horrified when he learns a piece of that truth: that S.H.I.E.L.D. has developed three huge floating gunships with the task of “neutralizing threats before they happen.” 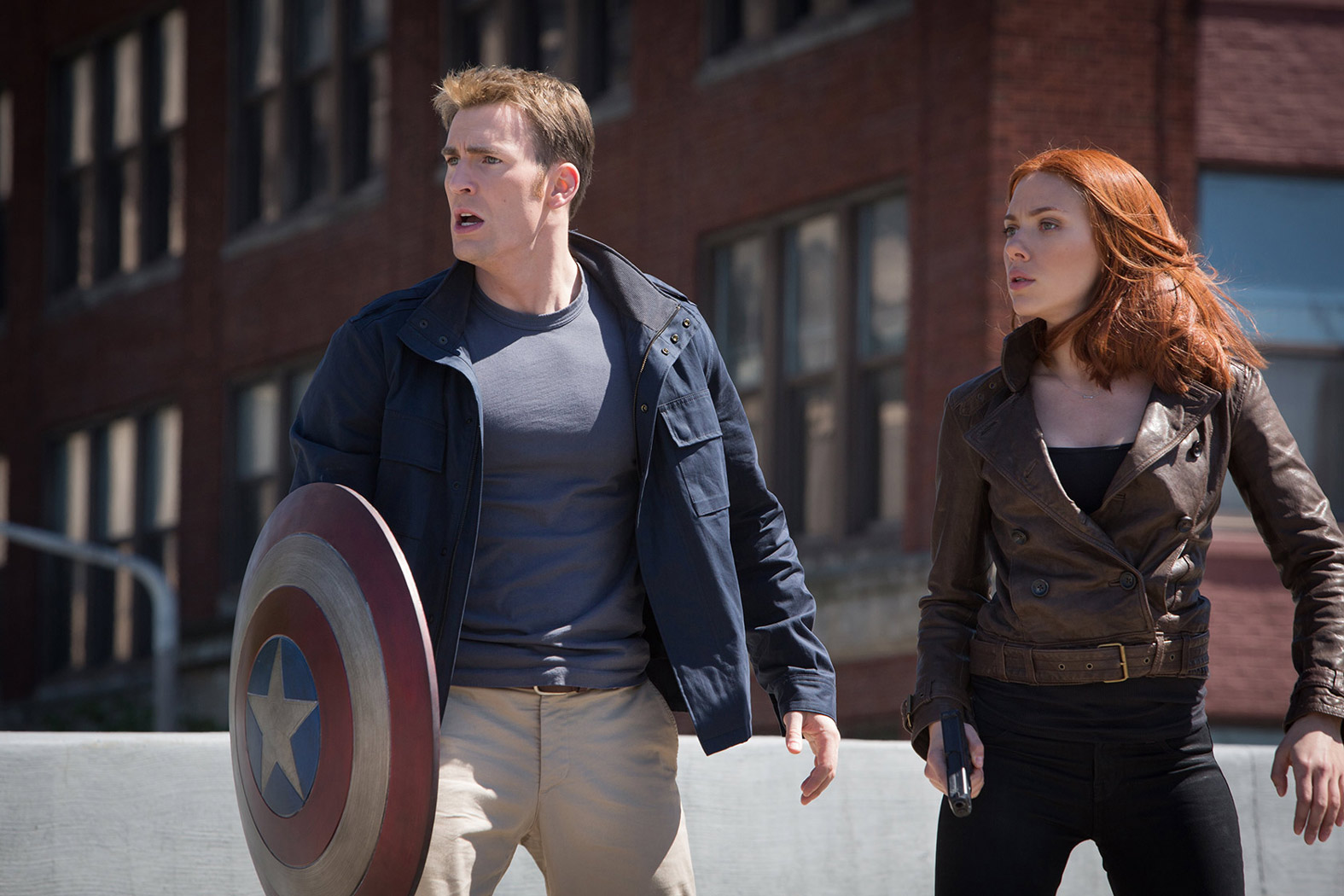 We learn that Director Fury, too, is asking questions, which leads to the discovery that S.H.I.E.L.D. itself is compromised. An assassination attempt on the Director pushes him to reach out to Steve. Cap and Natasha go on the run with stolen intelligence to discover what’s really happening at S.H.I.E.L.D. When they find that Hydra, the evil organization from the first film, has survived by infiltrating S.H.I.E.L.D. itself, they begin a counter-attack to bring down the gun ships and both organizations along with them. 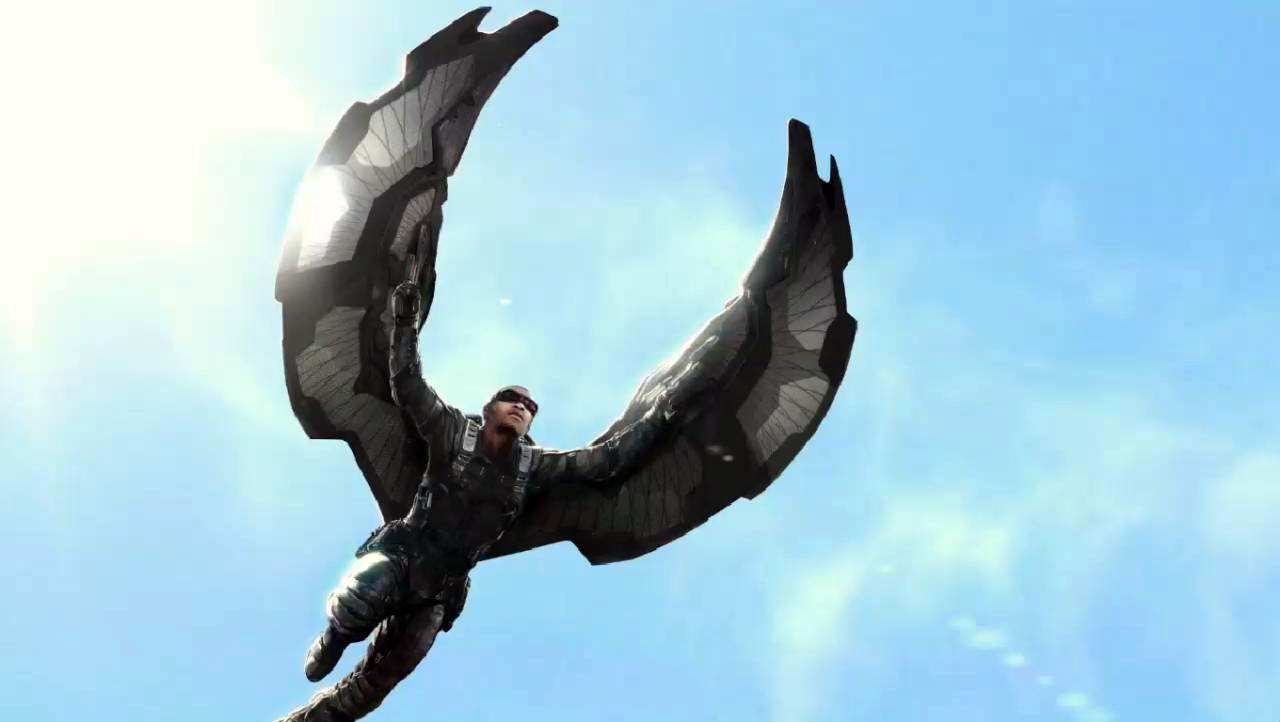 Cap and Natasha are aided in this task by Agent Maria Hill (Cobie Smulders, as seen in The Avengers as well as “Agents of S.H.I.E.L.D.”) and a new friend of Steve’s named Sam Wilson, or Falcon (Anthony Mackie). Falcon is also a former air force para rescue jumper with a pretty awesome ability of his own: a backpack with built-in wings that allows him powered flight. Together this small band must pull off one of those specifically-complicated movie plot devices to stop the ships and keep Hydra from killing millions of people.

The main opponent set up for Steve is the mysterious Winter Soldier. He is sent by Hydra and has a mechanical arm, with an assassination record going back fifty years. His identity is an interesting one, that Steve must wrestle with even as he’s fighting to save freedom itself.

One of the major questions raised by this film is of the line between security and freedom. Hydra reveals that they have been orchestrating conflict for seventy years so that people will slowly give away their freedom in order to feel safe. In our modern age of surveillance and  where our lives are lived so much in the open space of constant internet access, this conflict is one we face every day whether we realize it or not. Where is the line and where do our liberties take second place? The Captain talks about compromise for the sake of freedom, and the movie asks us to look critically at our own view of that line.

The movie also does a nice job of balancing Steve’s past with his present, as he works through living in a modern world that seems to have passed him by. He still listens to LPs but uses the internet to learn as much as he can. He flirts with his next door neighbor, Kate (I’ll come back to her), but visits Peggy in the hospital. It acknowledges that he is much older than those around him, but that he still thinks of himself as a young man.

Fun things to take note of while watching: Marvel is good at embedding hints of what’s to come within their movies and this one is no exception. Agent 13 is a perfect example of this, under cover as Kate, Steve’s next-door neighbor, but in reality a S.H.I.E.L.D. operative loyal to Director Fury. (If you want to know who she really is, click here, but don’t say I didn’t warn you: Spoilers, sweetie.) The movie also mention Stephen Strange, which could be a little clue of future appearances, or simply an Easter egg for the fans.

There is also a brief cutaway scene early in the movie showing a list Steve is making of things people are telling him he needs to catch up on from the last seventy years, and in various international releases, the list has some local tweaks. (I noticed this immediately because I first saw the movie in Australia, where Tim Tams and Steve Irwin were included, which made me curious about other versions. Check out more here.)

As is becoming usual for Marvel movies, there are two credits scenes: one after the initial cast roll and one at the very end. Stay for both for clues about upcoming film.