When Jurassic Park released in 1993 it was cutting edge: it pushed the boundaries of computer graphics for the time, and when that T. rex stepped onto the screen the whole theater shook. Though there have been two other sequels since then, Jurassic World is the first one that, to me at least, felt like the true descendent of that first film. Though the science in this story is shaky, it’s still entertaining and a whole lot of fun to watch. Add to that a healthy dose of homage to the original, and this movie had me hooked.

The premise for Jurassic World is that it takes place twenty years after the events of the first movie, and that the island has become what John Hammond (Richard Attenborough) originally envisioned: a thriving theme park with over twenty thousand visitors a day who are enchanted and overwhelmed by the sheer amazing sight of dinosaurs. Sort of. It takes a lot to wow kids these days.

Guests embark on cruise ships to reach the island, where they encounter something much akin to Downtown Disney or the Universal City Walk: a long shopping and dining area with hotels built in so that they can stay right where they are and spend money. This shopping district even comes with a Starbucks and a Margaritaville. I kid you not. 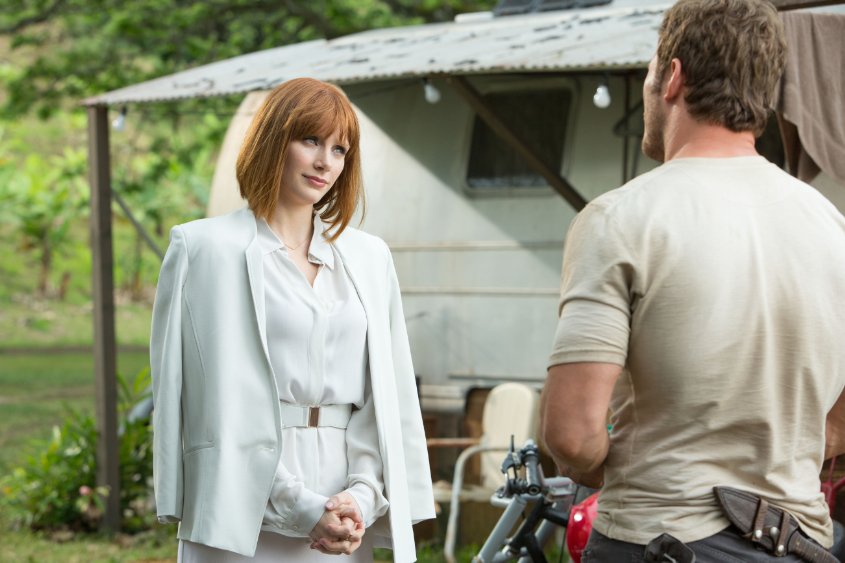 A pair of brothers, Gray (Ty Simpkins) and Zach (Nick Robinson), are sent to the island visit their Aunt Claire (Bryce Dallas Howard) who is in charge of the day to day operations of the park. Though overseen by a board, Claire runs the show; she pays attention to profits, meets with potential investors and sponsors, and in particular makes sure the genetics lab creates new “assets” to keep interest in the park going. Attendance plateaus. People aren’t impressed with simply seeing dinosaurs anymore. Find a bigger, badder monster to show them! You can see where this is heading, I’m sure. 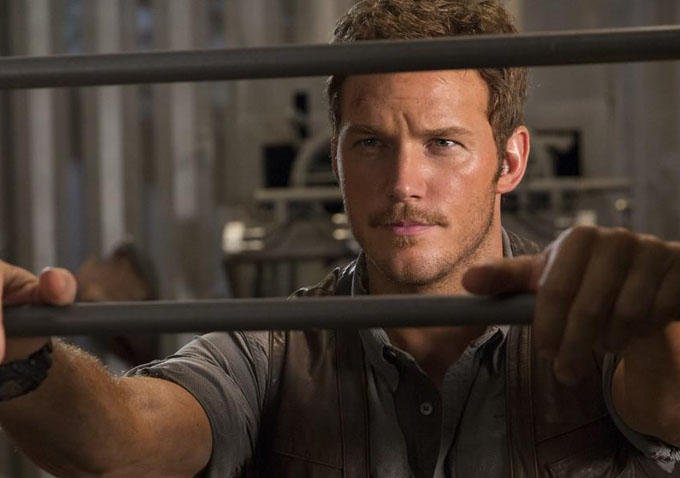 Meanwhile, velociraptor keeper Owen (Chris Pratt) and his co-keeper Barry (Omar Sy) are busy training their herd of four using operant conditioning. (Side note: while his technique wasn’t perfect, I was actually really impressed with Owen’s clicker training.*) At this point, the movie lost me a bit because it introduced the antagonist, if you will. Instead of a greedy businessman, suddenly we are dealing with a military contractor mercenary type guy, and to me it was jarring in the context of the rest of the movie. At any rate, the military contractor is weirdly interested in using the dinosaurs for his own purpose, but Owen and Barry are having nothing of it. Owen is called away to inspect the enclosure of a new “asset” (aka new giant dinosaur with bigger, badder teeth to give people a sense of awe) created in the lab by none other than Harry Wu (BD Wong), the geneticist from the very first film. Owen doesn’t understand why he’s been assigned to this animal, but it seems to have very strange characteristics for a T. rex, which is its “template.” They name it Indominus rex.

As with the velociraptors in the first film, this lab grown dinosaur is (surprise surprise) showing high levels of intelligence for “an animal” and shows great capacity for learning. They are desperately trying to shore up her enclosure (why why why why did they not finish this enclosure before putting her in there??) and she has already killed her only sibling. 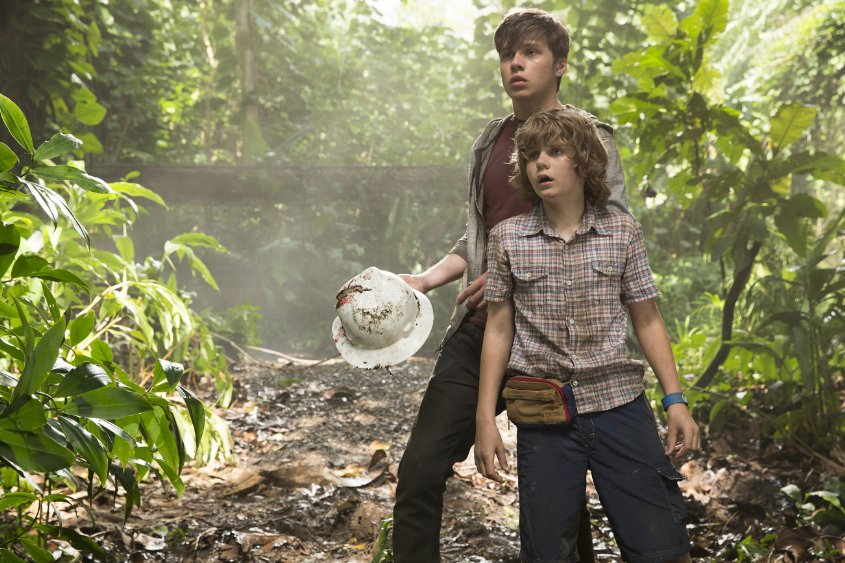 You know what happens next. The monster GMO dinosaur escapes and chaos ensues. The kids are out of pocket and Claire and Owen head out to rescue them. This is actually my favorite part of the movie. Not only to the boys end up rescuing themselves, but while running from I. rex they stumble across an old building, overgrown with vines, and push their way through a pair of very familiar looking doors. Some familiar notes play softly as they walk into an atrium and I will admit it gave me tingles.

And while Owen may be the action hero guy, I have to give it to Claire: she goes from being all business to being able to hold her own when the time comes, and she does it in heels for the whole movie. I’d have broken off the stilettos and at least walked in flats personally, but hey. More power to her. I won’t tell you any more of the story so you can enjoy watching it play out for yourself. 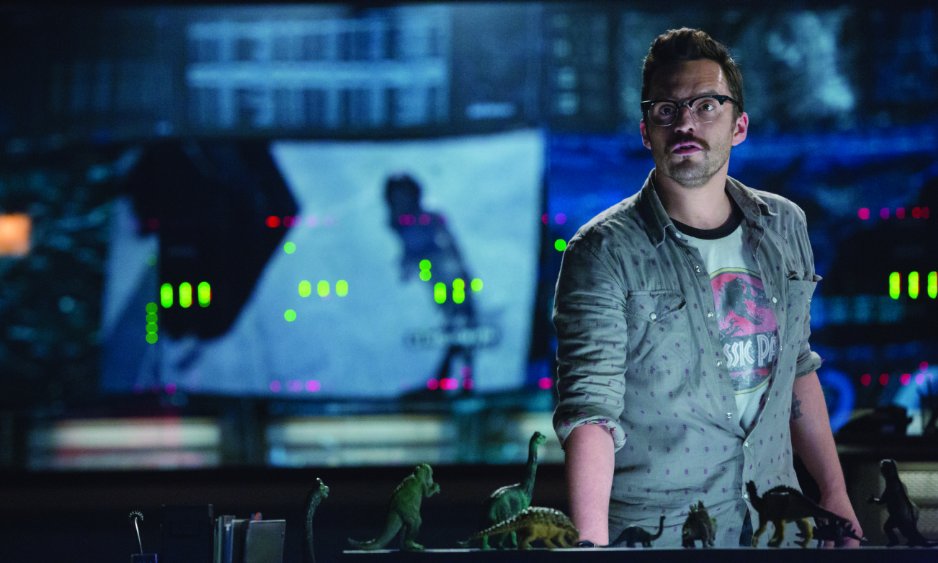 In another homage that I thought was a nice nod to the fanbase, control room technician Lowery (Jake Johnson) is criticized for wearing a classic Jurassic Park t-shirt (“Isn’t that in poor taste?”) that he bought on eBay. His desk is lined with the kind of plastic dinosaur toys I had as a child, and that I’m sure many fans did as well. It’s a wonderful way to acknowledge the original.

I will tell you about a couple of things that bothered me for most of the film. In the twenty two years since Jurassic Park, we’ve learned so much about dinosaurs and their descendents, birds, that now it’s commonly accepted that many if not most dinosaurs (and certainly tyrannosaurs) were feathered. While I know it wouldn’t have been consistent with the aesthetic of the first film, it would’ve been nice to see some feathered dinos running around. The animals depicted also seemed to stick with older renditions of prehistoric animals (like the pterosaurs’ movements) more than current best analysis. They did mention while in the lab that they didn’t have complete genetic codes for the animals and so had been filling in the gaps from the beginning, but it made me wonder if they never came across feathers at all. Or if they did, and if they’d filled in gaps with birds, did they assume those feathers were flukes and genetically alter the animals to be featherless? I’d be a grumpy T. rex, too, if I was unexpectedly naked!

The science in this is, of course, fiction, but it also didn’t really portray an accurate version of genetic engineering at all. And, of course, the dinosaurs living together in the park existed at many different times, and the iconic T. rex was alive 100 million years after the actual Jurassic period. But maybe I’m nit-picking. 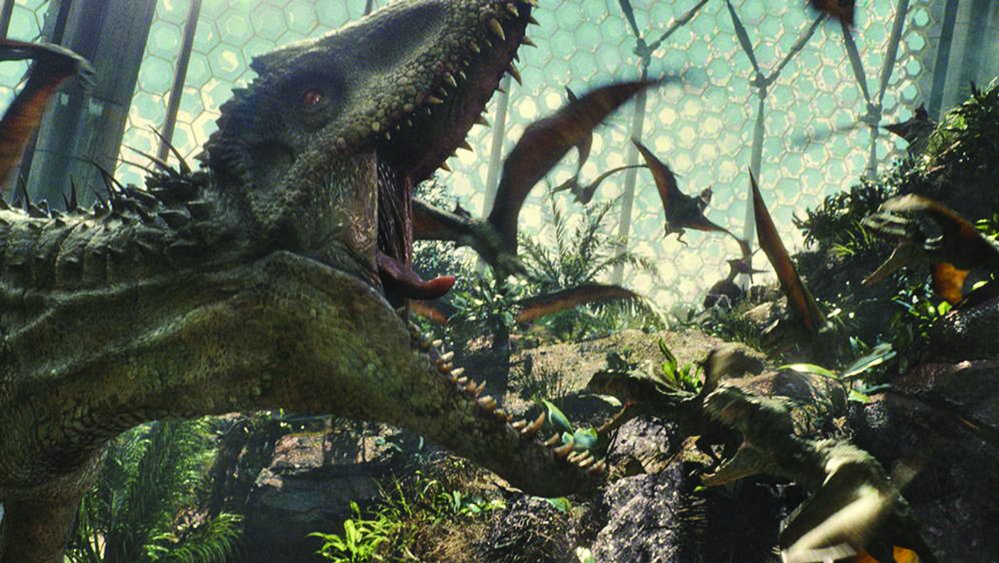 Overall this was a fun movie and I thoroughly enjoyed it. I highly recommend checking it out, whether you were old enough to see the first one in theaters or not. While the nostalgia factor is high, the story and characters still seem fresh, and though the concept isn’t brand new anymore, a theme park full of dinosaurs can still capture the imagination.

If you’ve seen it already, let me know what you thought of it in the comments below!

*On a personal level, having worked and volunteered at a number of zoos/wildlife rescue places, I found myself both impressed and frustrated in turn by the good and bad practices this keeper staff used with their animals. Yes, I know these aren’t real animals, but I have to say that the way the velociraptor enclosure was set up with the double barrier and overhead feeding was actually well done. However, no one in their right mind would have hesitated to sedate the animals if someone actually fell into the enclosure with them, building trust or no. So yeah.

From a zoo standpoint, this place reminded me strongly of the San Diego Zoo Safari Park, both in layout (though on a much much larger scale) and in guest interaction. The Safari Park even has a tram that takes you around the edge of the big open areas with the free range herds and is working tirelessly to bring animals back from the brink of extinction.