Some movies are excellent for their stunning visuals, tight writing, and stellar acting. Some are excellent in their camp and sheer badness. Godzilla (2014) suffers from being neither. This movie somehow manages to tread somewhere between being a good science fiction piece and a bad monster movie, but the lack of any internal logic is what really keeps it from fulfilling its potential as either. 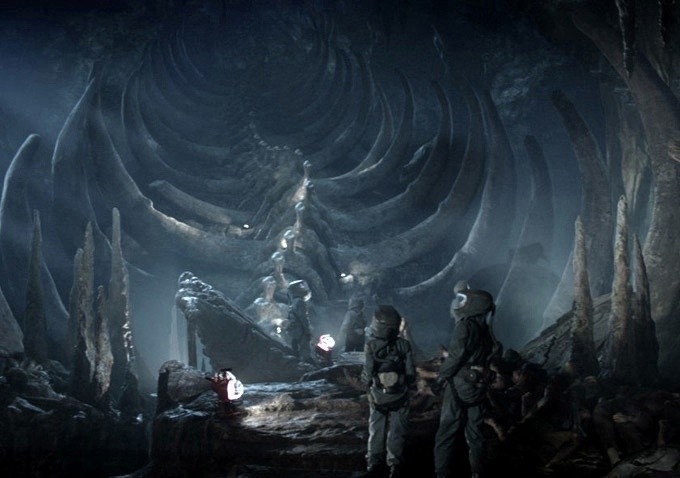 The movie opens with footage from the 1940s and on, clips of strange creatures and atomic blasts, the credits pulled from “redacted” text, establishing a history for the movie in the opening moments. Finally we land in the Philippines in 1999, where a collapse at a mine has uncovered a giant skeleton and two gooey pods, one of them empty and the other dormant. Some Scientists explore the cave and make ominous statements about it.

From there, we move to a nuclear power plant in Japan where we meet an American family. Why are they American? Because Plot, apparently. The parents Joe Brody (Bryan Cranston) and Sandra Brody (Juliette Binoche) are employed at the plant while the son Ford (CJ Adams) goes to school nearby. Strange seismic readings are largely ignored until the whole plant suddenly goes into meltdown. The husband watches as his wife is trapped behind a door with the radiation cloud, and the son watches the whole thing collapse from his school. Thus begins an entire movie of a single family witnessing every single thing that happens. Why? Again, Because Plot.

Fast forward fifteen years and the son, Ford (now played by Aaron Taylor-Johnson), is a bomb technician in the US Navy and freshly home from a 14 month deployment. He’s been home less than a day when the US Embassy in Japan calls to tell him that his father has been arrested for trespassing again, and will he please come bail the man out of jail? I’m sure that every time an American gets arrested in another country the local embassy calls on a relative to fly out and post bail, right? But Ford must go to Japan to get his father Because Plot. Thus begins Ford’s journey as this movie’s Forrest Gump, arriving just in time to be at the center of every major event in the course of the action. Ford’s father insists that they go back into the quarantine area around the old nuclear plant for his fifteen-year-old research, so Ford (who, if you recall, has just posted his dad’s bail for trespassing) helps his dad trespass again, and they discover that the old plant is a fully operational secret base… only to be detained and taken straight to it. Unknown civilians near a secret base? Bring them inside! Why? Because Plot.

The base, it turns out, is for researching a large cocoon thing that took up residence there fifteen years previous, causing the original disaster. And what do you know, it’s feeding off of the radiation… until it hatches. A giant insect-like monster referred to as a MUTO (Massive Unidentified Terrestrial Organism) emerges and proceeds to destroy the base and kill almost everyone inside before flying off across the ocean, emitting electromagnetic pulses (EMPs) as it goes, effectively rendering all of their weapons and technology useless. The lead scientist Dr. Serizawa (Ken Watanabe) is rescued by the US Navy and brings Ford and his father, too, because they have old graph paper so clearly They Know Things. 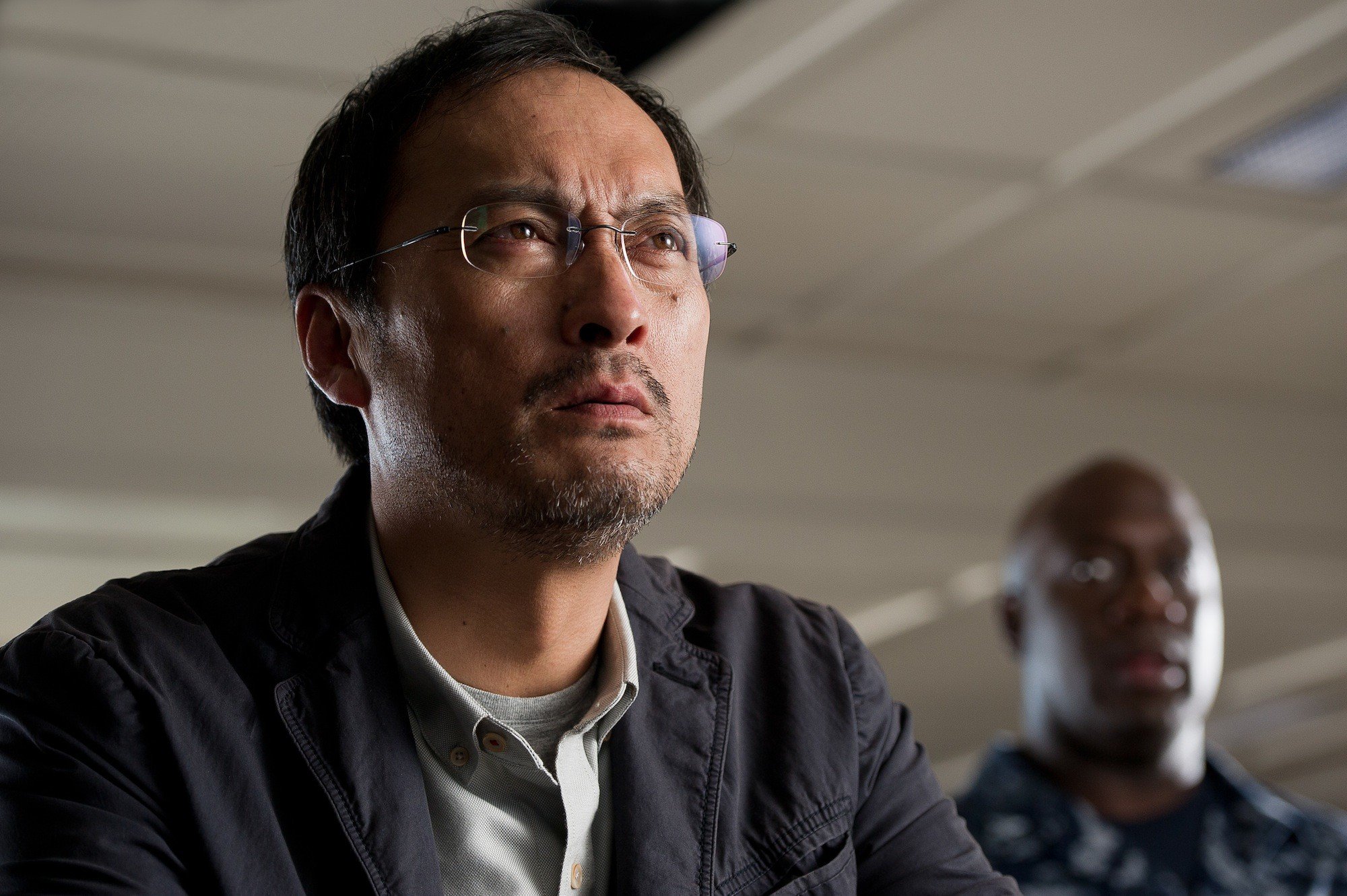 The US Navy is tracking the MUTO while Dr. Serizawa, who seems to have degrees in Looking Very Concerned and Stating Things Just Before They Happen, fulfills his job by traveling with the Navy so he can point out some important plot points moments before they become relevant. There was a second pod,  you see, and it happens to have been moved to the US’s nuclear waste site. What better place to store a thing that feeds off of nuclear energy than a nuclear dump, right? But it’s there Because Plot, and soon enough another giant inset monster emerges, and the two MUTOs are set to converge on San Francisco. At this point the lead scientist (who also seems to have advanced degrees in Plot Dump Exposition and Last Minute Timing) reveals that his team has known about the existence of another mega-huge creature for decades named Godzilla, and that he can “restore the balance of nature.” The US Navy goes ahead with its plan to blow up everything with a nuclear weapon (again, using the creatures’ food to supposedly eliminate it..? Because Plot.) and we careen ahead to our massive climatic battle.

This movie has so many plot holes that could’ve been easily fixed that it detracts from the entertainment value of the movie. For instance, how does Ford attach himself so easily to an Army unit without anyone contacting his chain of command or even checking his ID? Why does he tell his wife to wait for him* instead of telling her to get out of the city with their son? Why does the Navy decide to arm a bomb before taking it away from a city of 4 million people, except to then draw the monsters to one of the most heavily populated areas on the coast? Why not instead attract them to the middle of the ocean? Because Plot required the humans to have even higher stakes than actual giant monsters leveling San Francisco. Why do the authorities wait until there are only about 100,000 people left in San Francisco to evacuate the children across the Golden Gate bridge? And did the San Francisco Police Department miss the memo about said evacuation, so that they felt the need to inexplicably block that bridge? The answer to this last point is so that Ford’s son can be on the bridge to witness Godzilla’s arrival (and yet be one of very few to survive, conveniently enough), Because Plot.

And I think that may be my real hangup with this movie: the characters to whom I am supposed to relate are no more than plot devices, put there for the sake of having familiar faces in every scene and fully lacking in any agency or personality. Ford is always in every place these monsters appear (even just happening to be in Honolulu when they pop up to wreck Waikiki** for no good reason– the submarine that the MUTO drops there was in the “North Pacific” so why didn’t the monsters head for Alaska or somewhere else closer?) and also just happens to have the exact right skills to survive. When he can’t be present, his son or wife are there to bear witness, but at the end of the day, they serve no other purpose. Because of that, I didn’t care much what happened to them, so the stakes didn’t seem terribly high to me. We pretty much just watched a bunch of empty buildings get destroyed while the human characters ran around Doing Things to Look Busy.

Just a few changes, like giving a little explanation to help patch the plot holes or creating character development (any at all would have been nice– the scientists didn’t even really apologize for feeding the insect monster until it hatched, just turned up every so often to Look Fairly Concerned About the Situation), and this could have been a really great science fiction monster movie. On the flip side, it could have had exponential value as a campy flick if it hadn’t tried to take itself quite so seriously; as it was, the audience never laughed once, no matter how ridiculous the scene. It missed both marks, which I think was a shame.

Because I like to end on a positive, I will say that there were things I liked a great deal about this movie; the visuals were fantastic, the score was well done, and the homages to Godzilla lore were fun to spot. I really enjoyed that, especially at first, our glimpses of Godzilla (and even the insect monster) were just tidbits of the whole creature, as the human observers in the movie only saw pieces at a time. This effect made the creatures appear truly massive and added much-needed scope to the movie. The monsters were also well rendered and realistic in their salivating scaly glory. Godzilla even had his signature tsunami entrance, particularly in Hawaii,*** and certain scenes hearkened back to older films. I was particularly reminded of the battle scene in Godzilla vs. Mothra toward the end, except that in this case, Godzilla is definitely the “hero.”

All in all, I’m not sure if I’d recommend this one or not. I was certainly entertained, but in a trying-not-to-point-out-flaws sort of way for quite a bit of it. If you enjoy this sort of thing or simply love classic monsters like Godzilla regardless of plot, then go for it. Just be prepared to check any usual standard for internal logic at the door.

*Having her decide on her own to stay because she wanted to help people would have been far more interesting for her character than “I’m going to stay here in danger because my husband told me he’s coming.” A military spouse who lives on her own for over a year at a time suddenly can’t decide something without her husband? Yeah, right.

**I am endlessly entertained and baffled by the amount of money that Hilton Hawaiian Village has spent to be the only place that people hang out when movies and TV shows take place in Honolulu. I’m looking at you, Hawaii Five-0.

***Though, having lived there, the tsunami sirens would’ve gone off WAY before then.