Home/TV & Movies/Movie Review: X-Men: Days of Future Past
Previous Next

Well, X-Men fans, this is the movie you’ve been waiting to see. X-Men: Days of Future Past is one of the best, if not the best, movie so far in this franchise. It balances two parallel points in time, the bookends of a war, and one very indestructible Wolverine, all with good pacing, exposition that doesn’t bog down the action, and character growth that has you rooting for some surprising heroes. In short, go see this one; you won’t regret it. And in case you don’t read further because of spoilers, there is a bonus scene at the very very end of all of the credits.

The movie opens not far into our own future with a massive war that has brought an almost unbelievable amount of death and destruction, not only to mutants, but to humans as well. Huge AI robots called Sentinels are deployed to a desolate landscape, the remains of old cities hiding the few mutants and their human allies who have escaped while most lie dead in piles or in research facilities. One band is fighting back against them, led by Kitty Pryde (Ellen Page) and Iceman (Shawn Ashmore), and are soon joined by the last remnants of the X-Men; Patrick Stewart and Ian McKellen are back as Professor X and Magneto and is it ever exciting to see them! They are with Storm (Halle Berry) and Wolverine (Hugh Jackman) and have come to see Kitty because of her particular ability: she can send someone’s consciousness back in time to warn people that the Sentinels are coming. Professor X has a plan to end the war before it begins, explaining that the whole chain of events can be traced back to 1973 and the very first time that Raven, by then calling herself Mystique, kills someone, a man who experimented on and murdered mutants to create the very Sentinels attacking them.  He believes that if he can change that one action, the rest of history should edit itself and avoid the terrible war. Wolverine must be the one to go as his mind is most likely to survive the trip (it will be able to heal itself from the painful paradox of being mentally aware of future and past), so Kitty sends him back with the task of getting young Charles Xavier (James McAvoy) and Erik Lehnsherr (Michael Fassbender) to cooperate. Awakening in 1973, Logan must get his bearings and find the younger men, which not only proves to be difficult but almost painful because of the low place to which each has fallen. Charles in particular is the antithesis of the man Logan knows as Professor X and Erik has been locked away for a terrible crime. They have to enlist the help of Quicksilver (Evan Peters) and Beast (Nicholas Hoult) for this and set off to save the future. Changing the past isn’t as simple as changing a single event, however, and it takes quite a lot of convincing and growth on the part of all of the characters to move toward a resolution.

I really don’t want to tell you more than that for fear of spoiling some really great moments in the film, but I will say that the pacing of this movie was exceptional. Even though large portions of it were exposition-heavy dialog, it fit naturally in the scenes and brought the audience into the situation. Explaining to Logan and then to Charles and Erik the situation allows for the audience to learn as well in a very organic way, as the information is revealed to the characters. Then when the action does start, we, along with the characters, are invested in it because we can see the cost of not changing the outcomes.

This movie does a good job of playing on the modern conundrum of crossing the line in the name of security, and examining how a perceived crisis can lead to quick decisions. Though this is a topic seen in many other current movies, I think the movie does a better job incorporating it into the storyline than most, probably because of the nature of the source material. This movie also places the X-Men squarely back into their proper time frame, dealing with historical events that led to their formation and developing them as a team. It will be interesting to see how the story develops, and how the younger characters will change after these events; the next movie is already slated to release in 2016 and is supposed to take place in the 1980s about ten years after the events of this one.

I would also be remiss to not mention how much I loved Quicksilver’s character in this. His presence leads to some of the very best moments in the movie, that are funny and well-timed and so nicely matched to his personality and the circumstance… Just go see for yourself. 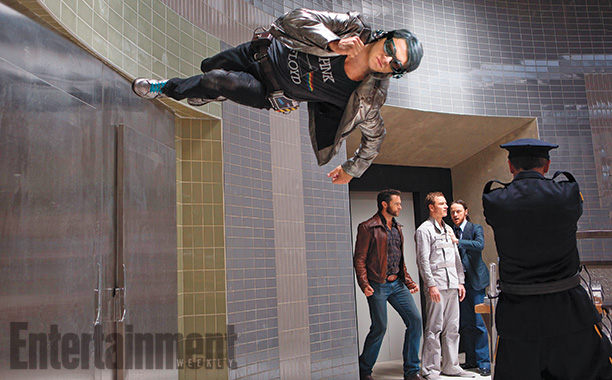 So there you have it. This is my favorite “big” movie of the year so far, and I highly recommend seeing it, even if you skipped First Class. Honestly, the writers give you enough in this one that you don’t need to know anything about that other film to understand what’s at stake. (And for those who worry about it, this one essentially undoes everything about Last Stand.)

Go see X-Men: Days of Future Past, and get ready to have a really fun two hours!