It’s finally here. After months of build-up and second (or even third) chapters in their individual movies, Avengers: Age of Ultron has finally hit the big screen. The whole team is back and ready to do battle with a foe of their own creation. Buckle your seatbelts because this is one heck of an action ride.

The movie opens with a bang to be sure. The Avengers are in the middle of a battle, attacking one of the biggest Hydra bases in search of Loki’s staff. If you’ve been watching Agents of S.H.I.E.L.D., this isn’t entirely unexpected. Even if you haven’t been watching the TV show, this shouldn’t be unexpected either. Thor wants to finish cleaning up Loki’s mess and has his Midgard pals along to help him. The base falls and they retrieve the staff, but not before they encounter two “enhanced” individuals: a pair referred to as “the twins” by Hydra, who seem to have inhuman powers. 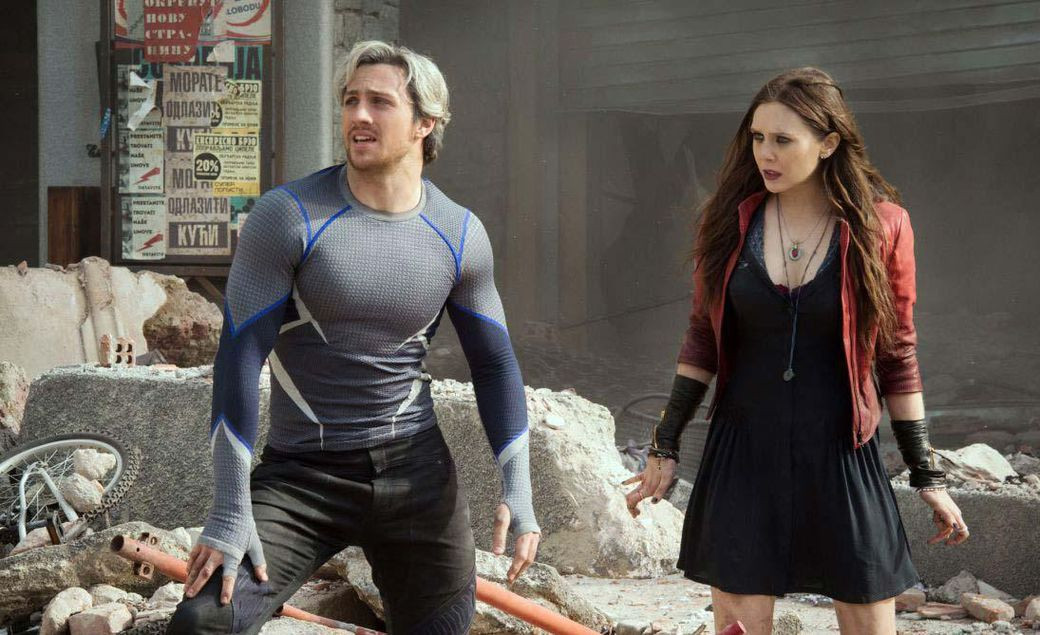 The team and the staff wind up back at Stark Tower where Tony Stark (Robert Downy Jr) and Bruce Banner (Mark Ruffalo) race to research the staff before Thor takes it home with him, and discover that there’s more to it than meets the eye; it seems to have a consciousness of some sort. Tony convinces Bruce that they can end their fighting (which is something Bruce desperately wants, as he hates the Hulk inside himself) if they create an AI Iron Man dubbed “Ultron” who can take their place. They experiment for a while unsuccessfully and finally walk away, sure they have failed.

What they don’t know is that the consciousness has a mind of its own, and finds a way into Tony’s program. It takes on the persona of Ultron and, after hooking itself into the internet, decides that the Avengers are the biggest threat to humanity and must be eliminated along with all other forms of human life. It’s kind of a big jump, but also not beyond the realm of our own experience, where people question how we treat our planet and one another. Ultron declares his intentions to the team and then vanishes through the internet to begin building himself a better body in order to mete justice to humanity.

From here the movie jumps into more frenetic action. They follow Ultron across the globe, learn more about the “enhanced” twins they encountered, and try to stay a step ahead of a being that seems to exist through any wired connection.

There is one very long sequence in the middle I could have done without. While it is entertaining for a moment to see the Hulk square off with any of his allies, when he is fully unleashed the destruction seems to just go on and on. While I can understand that the filmmakers want us to see just how bad things can be, and to see what Bruce Banner’s greatest fear is, in terms of movie time it is exhausting. I can’t help but wonder how the Avengers think destroying an entire city is on the balance “saving” people. Plot wise this is an important moment for the team, but it could have been handled more cleanly, either with news clips or simply by making the whole thing shorter.

When the movie shines, though, it is with character development. I want to know more about these people, and while we get glimpses into their pasts thanks to some mind control, really Clint Barton/Hawkeye (Jeremy Renner) is the only character given depth in this movie. Because of that, he was the only character I felt connection to during the movie, which is strange in an ensemble cast. The closest we got otherwise was the really lovely dynamic between Natasha Romanoff (Scarlett Johansson) and Bruce. The other characters were relegated to two dimensional portrayals of themselves. Why not let the team face their inner demons in the genesis of this enemy? Instead we get more and more fight sequences and CGI which, while fun, left me wanting more.

We do have more female characters in this movie, which was cool, and I especially liked Wanda Maximoff/Scarlet Witch (Elizabeth Olsen), but while these women are all intelligent and powerful (including an amazing scientist) they aren’t given much to do. Natasha as Black Widow is, of course, an amazing fighter, and her relationship with Bruce is interesting, but she barely speaks to anyone else besides Clint. The scientist is a means to an end and her character development is pretty much “crush on Thor.” While I can’t blame her for that, surely there’s more to this woman than crushing on a superhero? And the sequence where they explain Pepper Potts and Jane Foster’s absence is more like a weird testosterone match.

Even so, this was a fun movie to watch overall and I’m sure it will do well at the box office. Despite the obvious shortcomings, I enjoyed it for what it was and would definitely recommend to anyone who is a fan of the Marvel Cinematic Universe. I’m hoping that with the next Avengers movie (which they have already promised) we can get a little more character development and diversity. And given the glimpse we have, there is definitely hope for that in the future.

Word to the wise: the “bonus” scene Marvel is famous for takes place early in the credits sequence, and there isn’t one at the very end. Sit through the credits if you like, though; I, at least, was entertained by the disclaimer assuring me that none of the people or events in the movie were real.

Have you seen this or are you planning to? Let me know what your take is in the comments below!