S’mores! We like it, or better, we love it in all forms! Ice cream, cakes, french toasts… But S’mores PopTarts, we can take it with us, wherever we go! It doesn’t matter if it’s to work, shopping or hiking. We just put it in a bag, or box and let’s go!

You get the idea. Enough talking, it’s time to cook!

Ingredients and method for the dough:

Combined the flour, salt and sugar, add the butter and work with your fingers till it resembles wet sand, then add the water, gradually, and work it. The dough will be flaky. Wrap and stick in the fridge for a bit.

Note: if you don’t want to make your own dough, you can also use a premade pie crust, it just need to be raw and made with butter, so it would be flaky.

Ingredients for the filling and frosting:

Here the sky is the limit and you pick! You can use Nutella, or any type of chocolate spread. Combine with peanut butter or jam. You can also cut to size your favorite chocolate bar. You decide.

Roll your dough and cut into rectangles, you always need an even number, because you need a top and bottom.

Prep a tray with baking paper, lay the bottoms of your poptarts on the tray, (you need to do this way, because it would be difficult to move around the poptarts when they are assembled), now it’s time to put the filling of your choice. Remember to leave a boarder all around, brush the boarder with a egg wash, or water, put the top of the poptart, press a little with your finger, and then use a fork and press all around.

Pre-heat your oven to 350F/175C, put your poptarts in the oven till they are golden. Don’t let them brown. 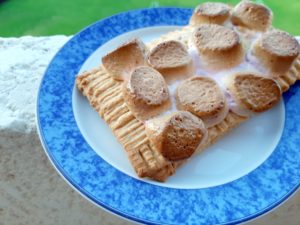 And there you have it! Yummy s’mores poptarts.

Mafalda, aka JustCombined, is a proud Slytherin. She always has food on her mind and can be found in the kitchen making delightful dishes and taste-testing new recipes. With her doggo Maggie and her hubs by her side, she’s conquering the world one tummy at a time. Find her on Twitter and Instagram @JustCombined!