To Eat Or Not to Eat: Limited Edition Pop Tarts

Home/Food, Reviews/To Eat Or Not to Eat: Limited Edition Pop Tarts
Previous Next

To Eat Or Not to Eat: Limited Edition Pop Tarts

Still, it’s hot and if you, like me, find yourself reaching for a frosty beverage to cool yourself but favor the convenience of a prepackaged pastry pocket, perhaps you’ve pondered partaking in a pop-flavored Pop Tart. No? Well I had not either, until I saw these sitting on the shelf of my local retailer and was overcome with curiosity. Overcome. 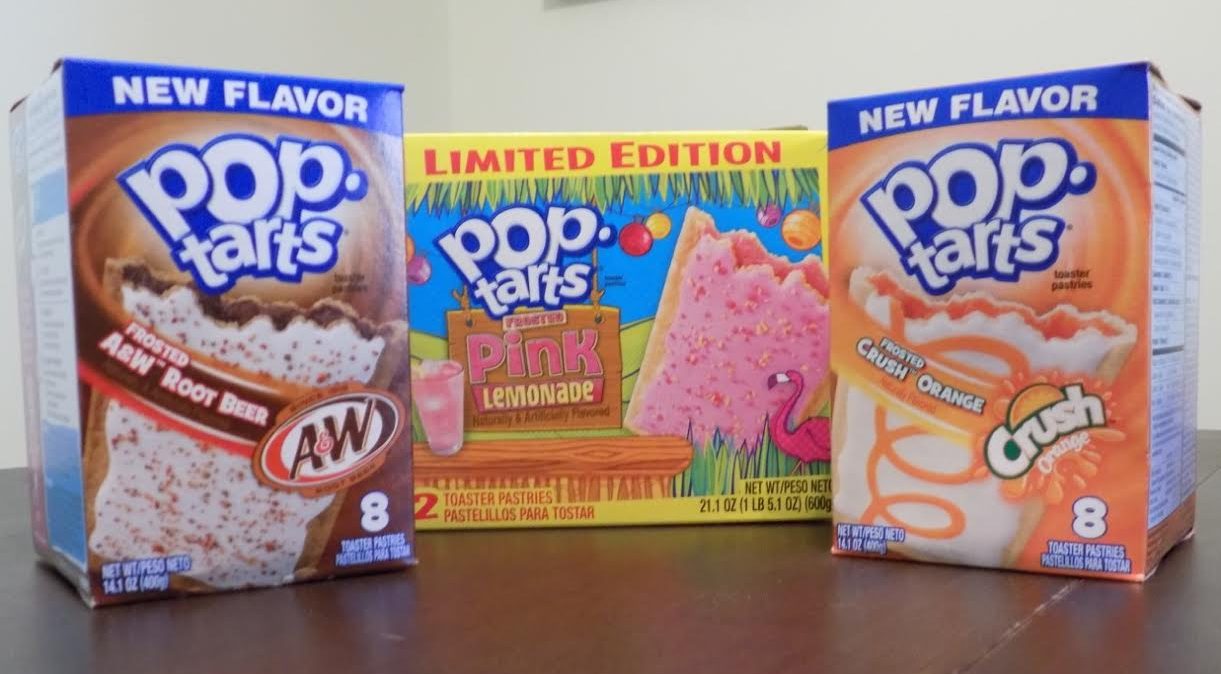 For the purposes of review, and also because there aren’t just a ton of choices for beverage-flavored Pop Tarts, I tried the Pink Lemonade, Crush Orange and A&W Root Beer flavors. In the interest of full disclosure, I must admit that I do not care for root beer. I am quite familiar with the taste and smell of root beer, and feel worthy to try these Pop Tarts for imitation quality, however I just do not, and will not, ever care for root beer. You understand what I do for you, yes? I really am trying these things, making these sacrifices, so that you don’t have to! 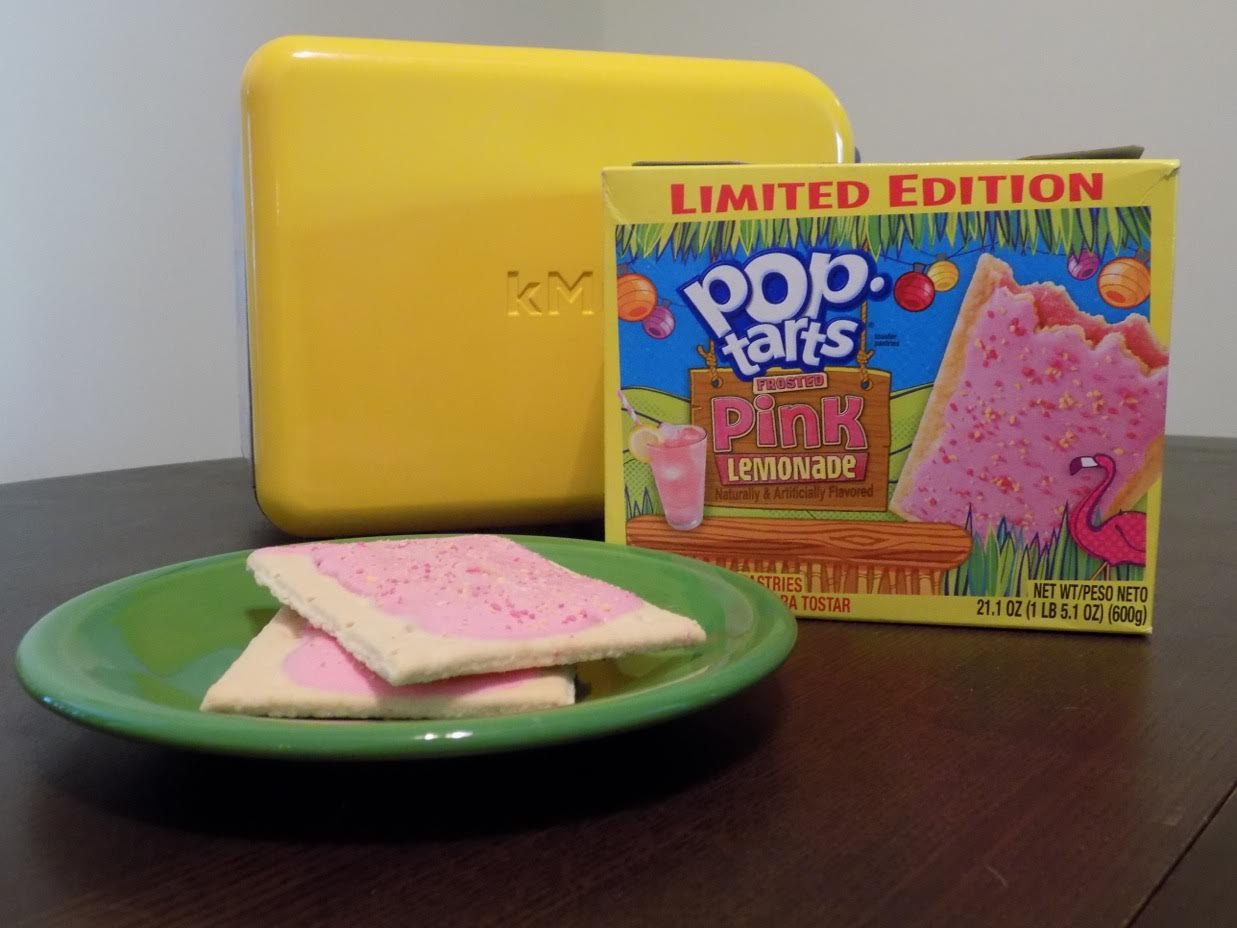 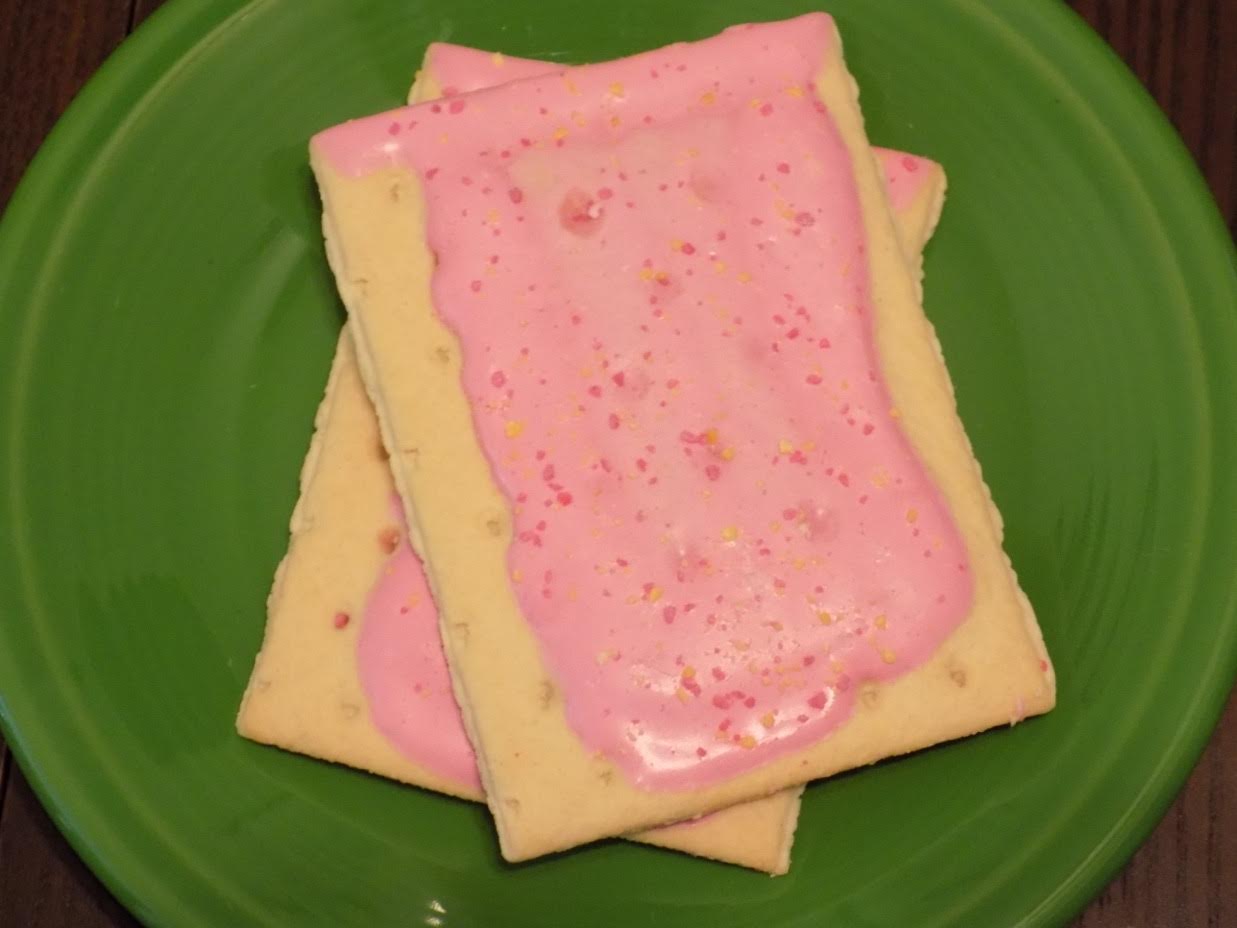 When I first opened the package there was no discernible lemon smell. The frosting was pink with those little dust sprinkles like on the Strawberry Pop Tarts. I tried this one untoasted first, and it had a definite lemonade taste, which is to say it was very lemony but sweet. I didn’t get much of a pink flavor. It did remind me of the pink powdery Country Time Lemonade mix, and I wouldn’t say it was gross, but it was weird to be eating a thing that tasted like Lemonade that was not actually Lemonade. 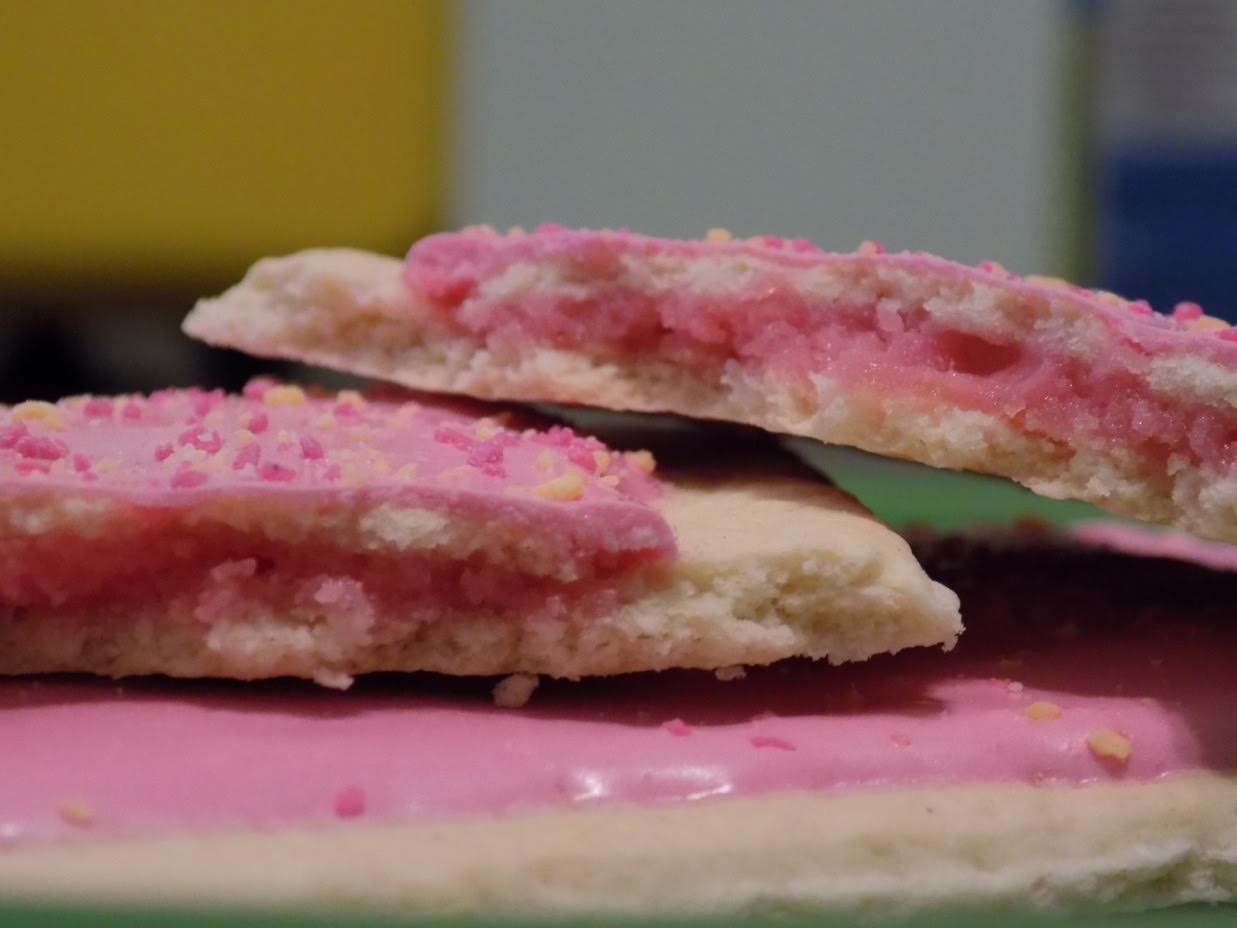 When I tried Pink Lemonade toasted, you could really get a strong lemon smell, like from a lemon-filled pie, but not like a good quality pie, and it had that standard warm softness that all toasted Pop Tarts get, where the edges are crispy and the middle kind of sinks and breaks apart. It tasted like warm lemon filling, pretty standard, but not something I’m going to reach for during breakfast. 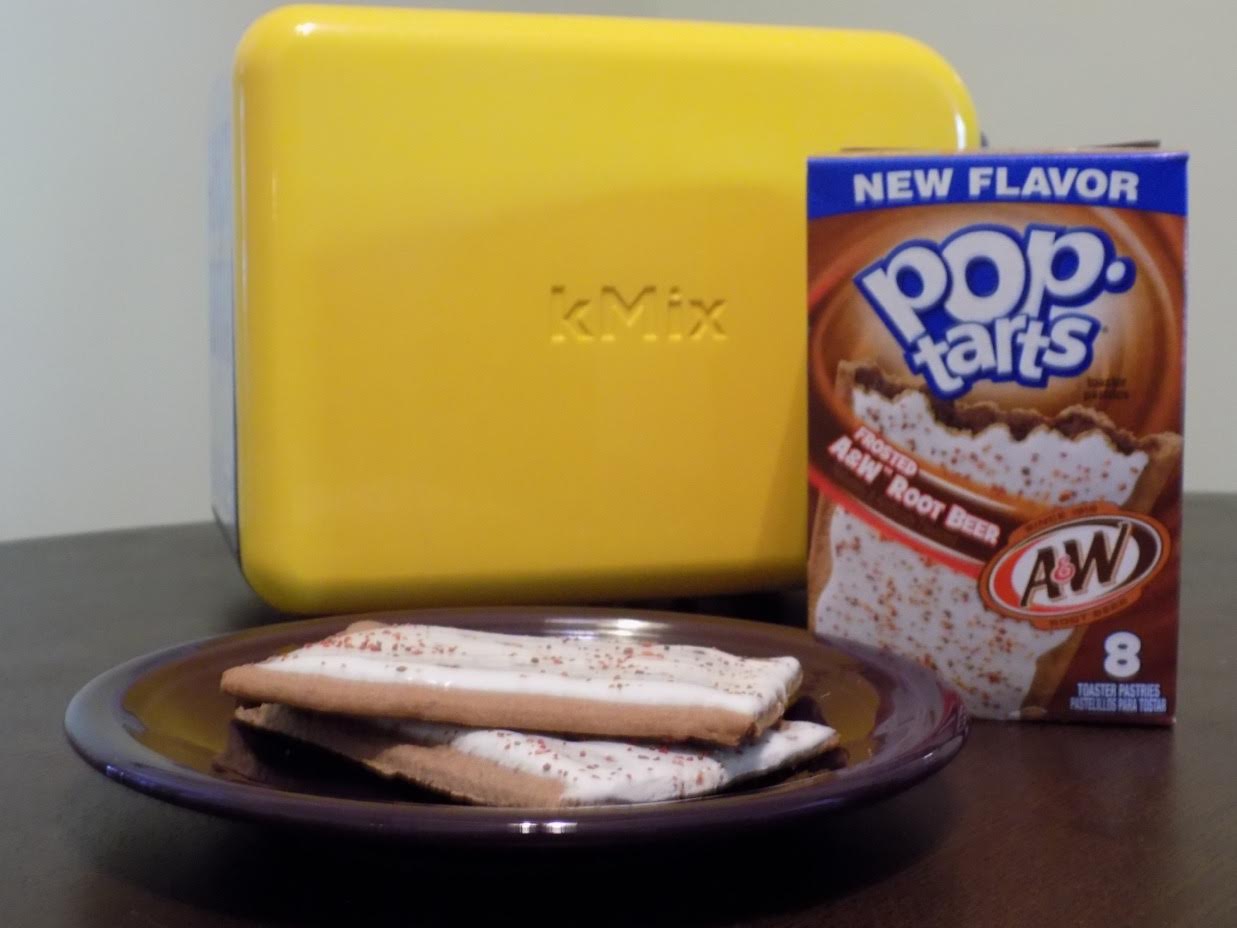 The next one I tried was A&W Root Beer. Again, I do not like root beer. But I know root beer, and these sure smelled like root beer right out of the gate. The root beer smell greatly overpowered the pastry smell, something that the milder Pop Tart flavors don’t really have going for them. You all know that cardboard sort of smell that the Pop Tart pastry has before you toast it. It’s not great but you eat it anyway because you know you love those little slabs of filling. 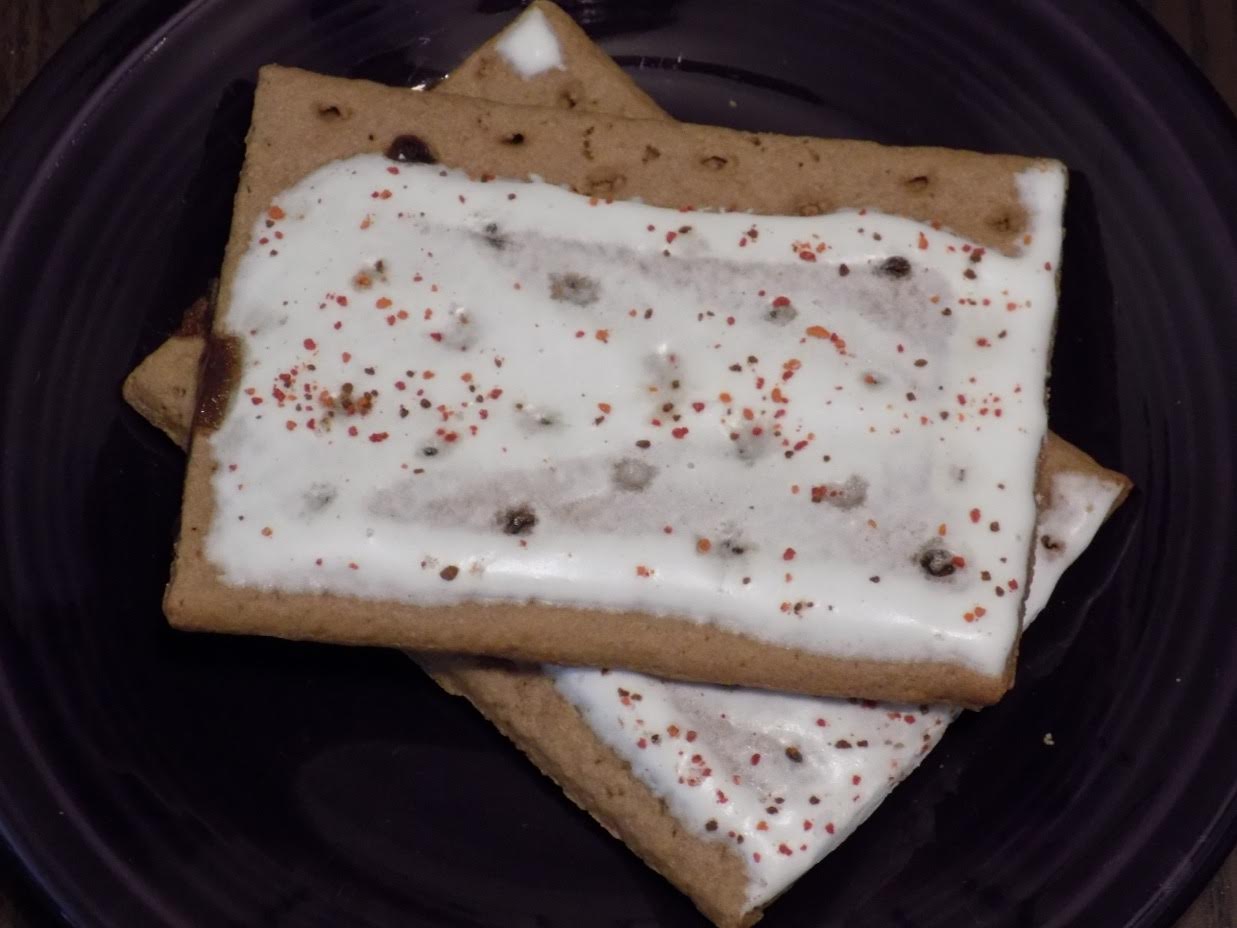 These Pop Tarts had the same kind of sprinkles on them as the previous ones and they sure tasted like root beer. They actually tasted like flat root beer, which I guess is more disgusting than not flat root beer, but it really doesn’t matter to me because it’s unpleasant both ways. They are kind of like those little root beer barrel candies, which I also do not enjoy, but I also know what they taste like because I’m not afraid to try most things within reason. 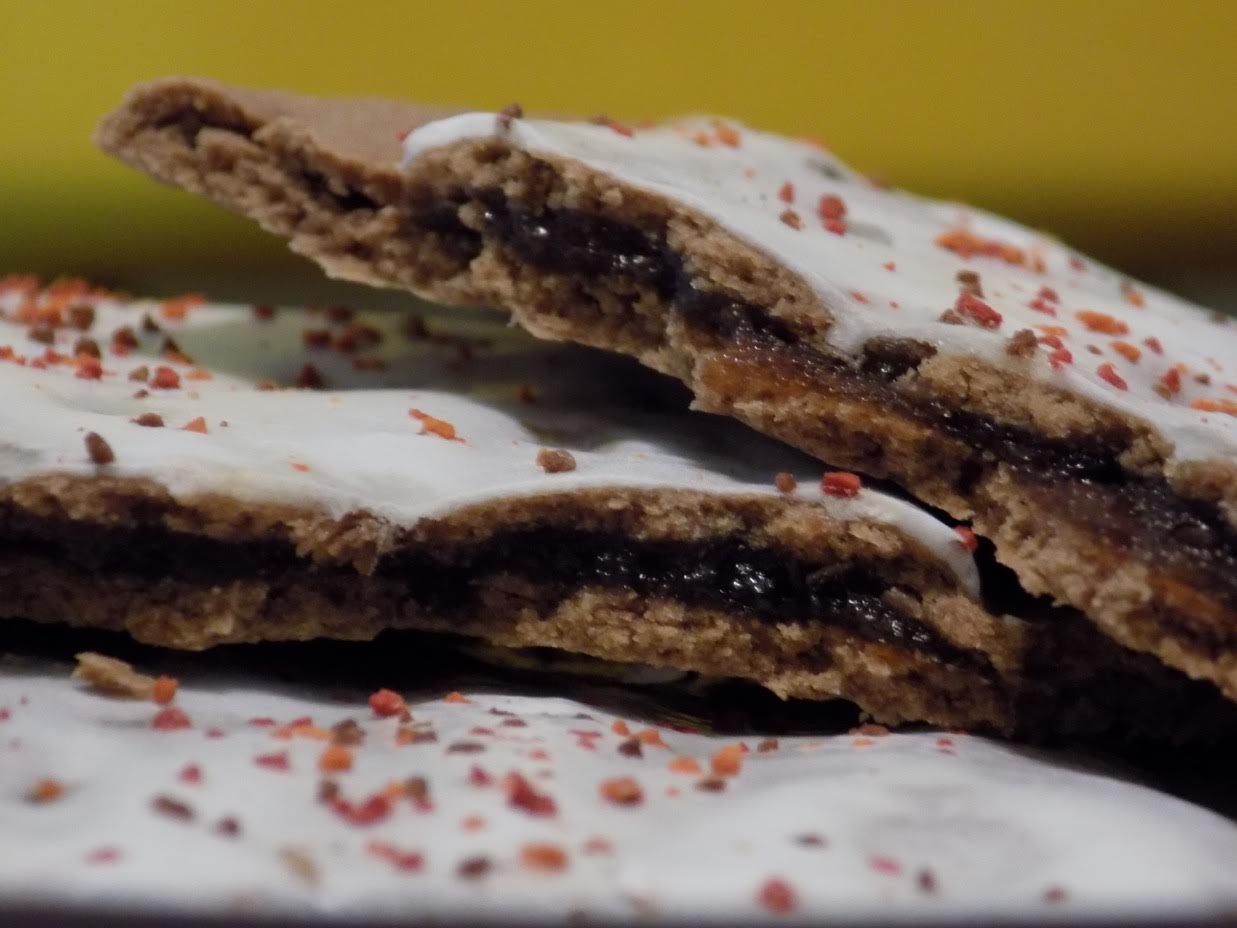 When I toasted the A&W Pop Tarts they lost some of their smell but they tasted a lot worse. Like when you leave your take out cup of root beer in a hot car and then drink from it anyway even though you know it’s been three hours and it’s flat and hot and will be gross but you do it anyway because you’re dazed by the sun or traffic or something. Basically, eating these Pop Tarts is as appealing as drinking flat hot root beer while being blinded by the sun in rush hour. 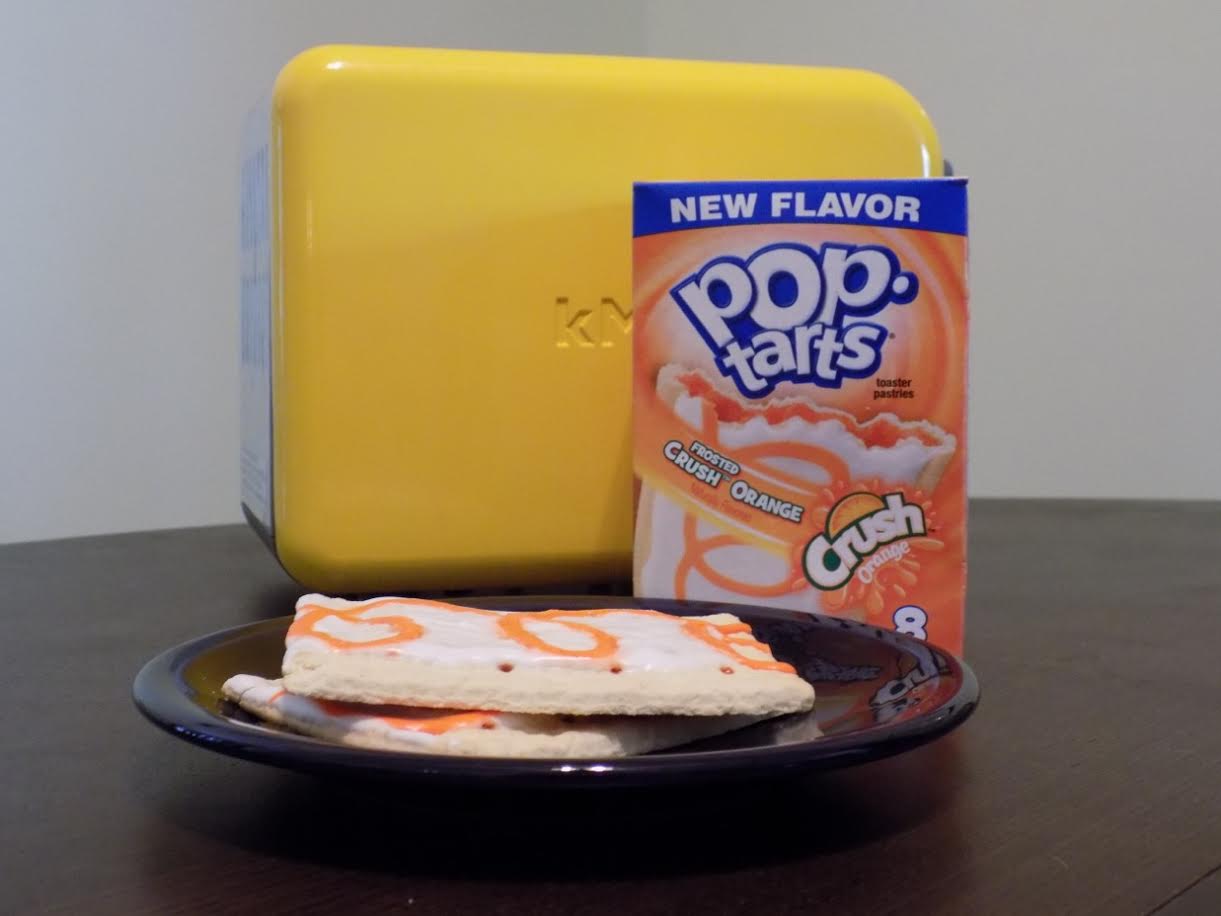 The last Pop Tarts to conquer were the Crush Orange. You know how sometimes you just know right away that something won’t be right? These are like that. They smell like orange soda and pastry, and they have the right color scheme happening for them. But they taste like flat orange soda and have that sharp kind of tanginess that a lot of fake orange candies get, like the lollipops that bank tellers used to give out to kids in the drive through before Dateline ruined everything. These successfully manage to lean more towards the soda flavor than just the straight fake orange, but it’s still not a winner. 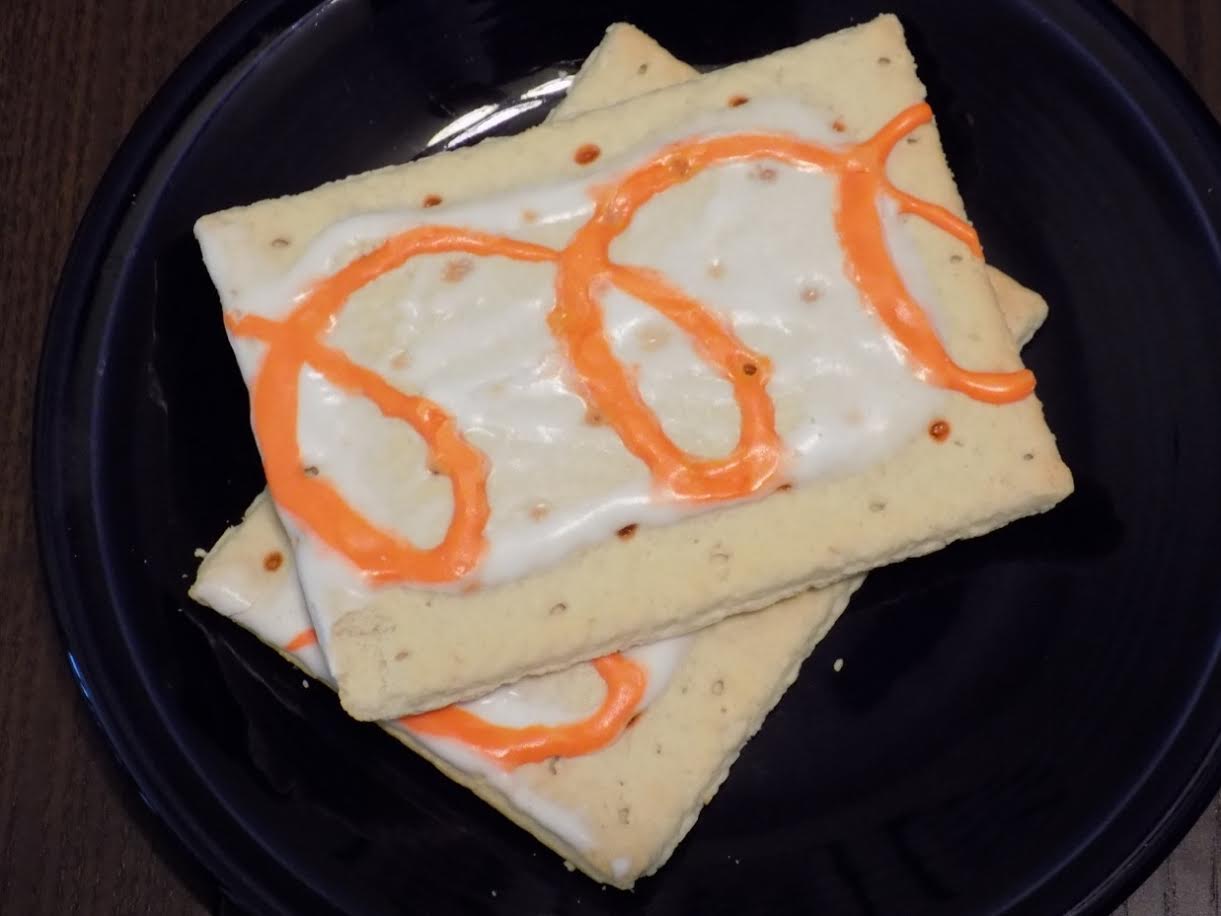 Toasting the Crush Orange makes it worse. Like much worse. Like nothing should taste this way. It’s not that I couldn’t get a toasted Crush Orange Pop Tart down, because I could. I just really didn’t want to. I don’t want to say I’d rather drink a whole mug of root beer, but I honestly probably would drink two whole mugs of root beer before I’d eat these again. 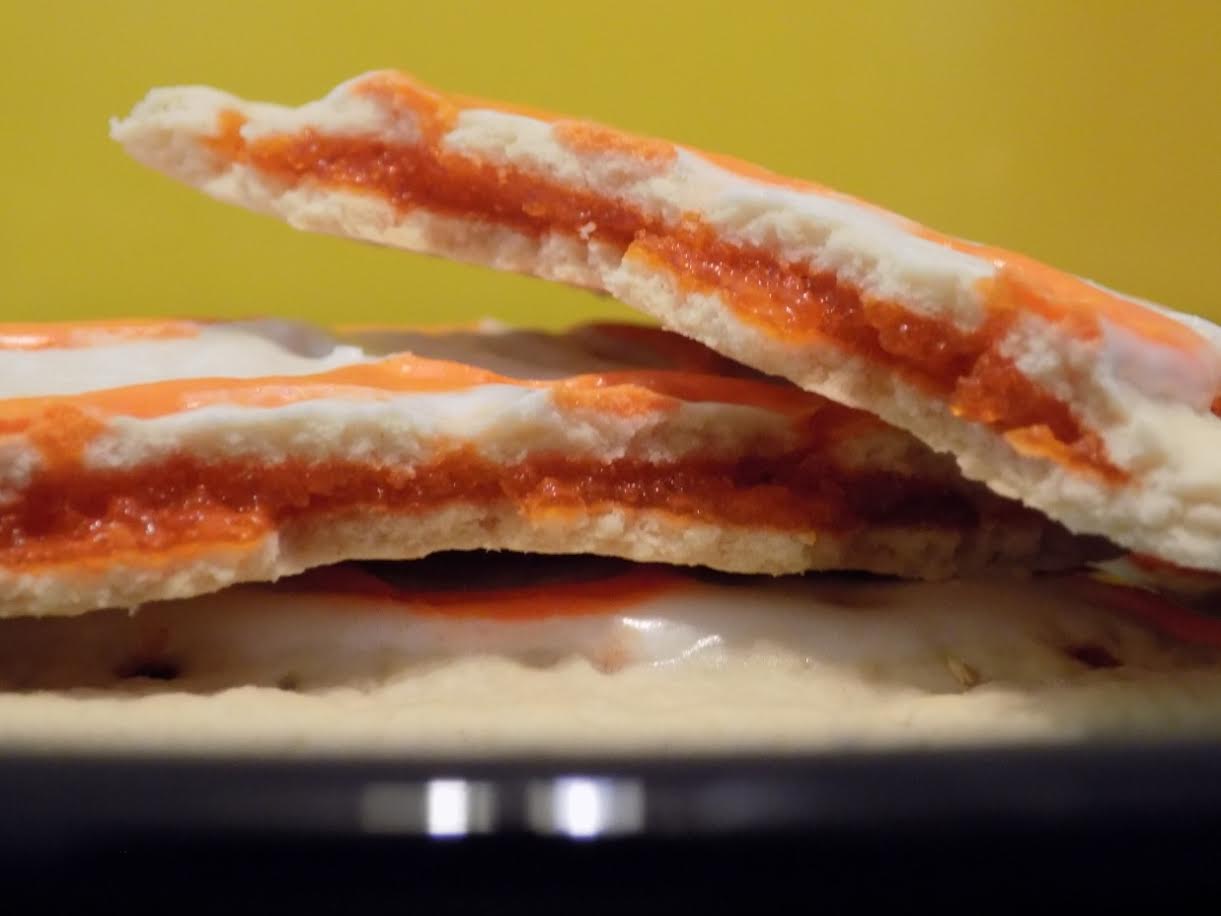 So now I’m sitting here with leftover Pop Tarts that I can’t get rid of. I honestly would never eat any of these again. I can’t quite figure out why they decided to make these flavors, but I do know that kids will eat weird things until they get older and stuff becomes gross. Like how I used to love eating white sandwich bread with butter and sugar on it and I called it “raw toast” which honestly I think is the most disgusting part of it. I loved it but now I hate it. These Pop Tarts are like raw toast to me, except I’m not certain I would have liked them at all ever. Stick with Cherry. I also hear Brown Sugar Cinnamon has a strong following.

So go ahead, tell me what your go-to Pop Tart flavor is and if you have tried any of these weird ones. Also tell me how cute my yellow toaster is because you likely determined that is the only real reason I wanted to review Pop Tarts in the first place.