To Eat Or Not to Eat: Limited Edition Goldfish Crackers

Home/Food, Reviews/To Eat Or Not to Eat: Limited Edition Goldfish Crackers
Previous Next

To Eat Or Not to Eat: Limited Edition Goldfish Crackers

Welcome to a new series, where we explore unusual flavors of common (or not so common) snack foods! This week we’re trying some new dessert flavors of Goldfish crackers with guest contributor Elise!

It’s September now and school has started again. Not that I’m in school, but I know all about it because a few weeks ago Target filled up with school supplies and this week it looked like a desolate wasteland of Ticonderoga because everybody wants the pretty glittery pencils. Not that I can blame them because glitter.

I think we can all agree that aside from brand new school supplies that one of the A plus luxe parts of school were bagged lunches. Did you not have those? It’s okay if you didn’t because pizza day was legit and bagged milk wasn’t so bad once you got used to it. (Now I’ve hooked those of you who are dying to know more about bagged milk. Sorry but this isn’t about bagged milk. This is the last you will hear about bagged milk from me.)

Aside from snack packs, a good solid part of a bagged lunch was Goldfish. Reliable orange fake cheesy Goldfish. And sure, sometimes you got a batch that was a little overdone, but for the most part you knew exactly what you were getting. 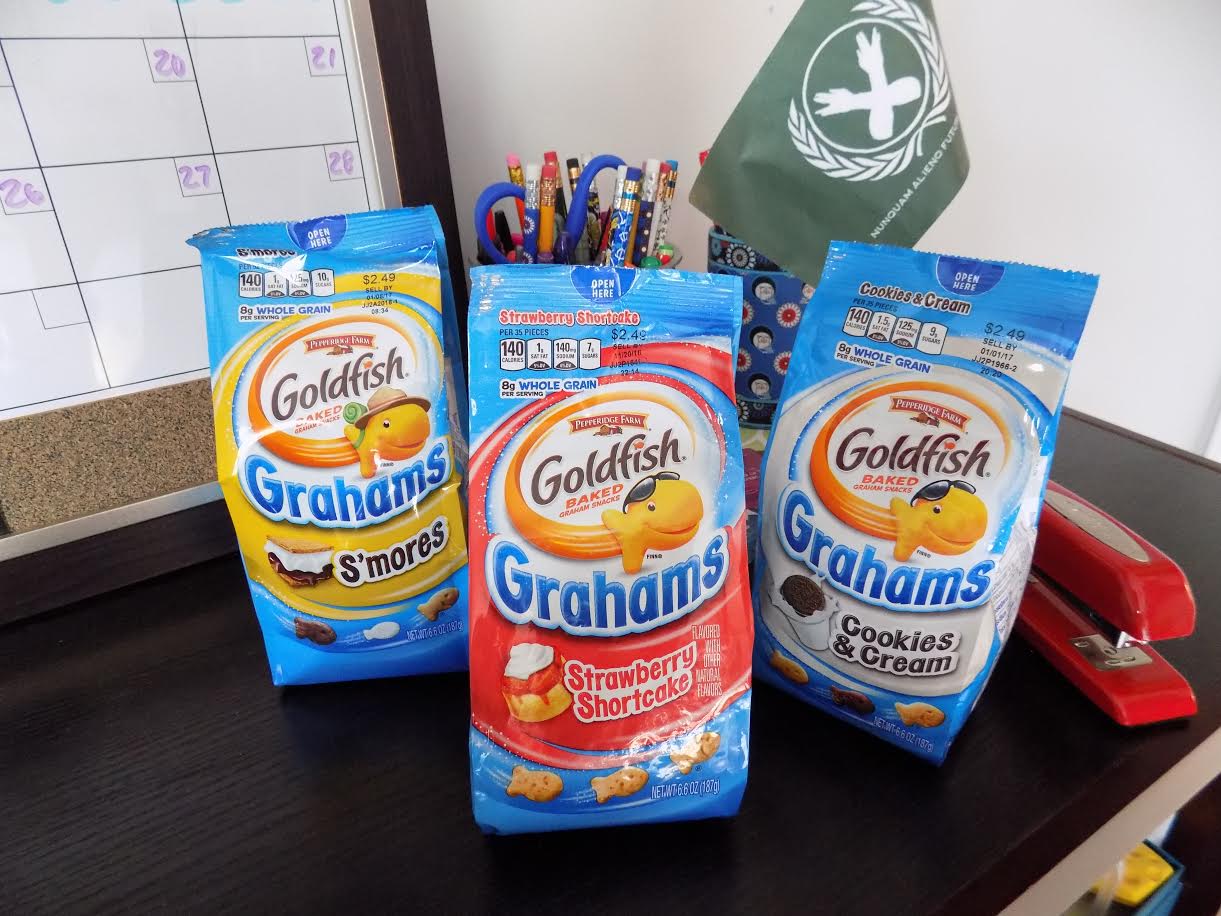 This is 2016 though and we can’t be confined to normal Goldfish. Oh no, we are a people of discerning taste, and what better way to indulge our gourmet vices than with the snack that smiles back? Because eating food with a face is better somehow. (It’s not better, it’s just that it’s convenient because when you post your food on Instagram it’s like it’s posing for the photo.)

In honor of those school time glory days, I opted to try three of the new dessert Goldfish flavors. That’s right, I’m trying them so that you don’t have to! Or try them if you want. I don’t care. The first one I tried was S’mores. When I opened it I took a big whiff and got a strong s’more sort of smell. It was a decent recreation of the chocolate and marshmallow smell you expect from imitation s’more. There were little white marshmallow pieces in it like the kind found in cereal. They were smaller than the cookie pieces, which were chocolate and graham flavor and slightly bigger than normal Goldfish crackers. The ratio between the three types of pieces was good, so when you poured out a serving into a bowl you could see an equal number of each kind. The problem was that the chocolate flavor was so strong it overwhelmed the marshmallow and graham pieces. The smaller size of the marshmallow also made it hard to ensure that you got equal parts in your hand as they would kind of sink to the bottom below the cookie pieces. Overall I didn’t taste much s’more, so the smell was really the best part of it as far as recreating the s’more experience. Next I tried the Strawberry Shortcake. These had a strong fake strawberry smell but they also had some kind of sugary dusting coated on top of them which I guess you could argue gave off a kind of cream sort of smell. Maybe. These cookie pieces were all one color and size and they had a strong fake strawberry flavor up front that became plain graham cracker taste around the third chew. These were actually quite forgettable. Just forget these. As in don’t buy them. At the end of it all, I would say that if I had to buy just any one of them, I would go with the S’mores. Why? The marshmallows. It’s the same reason why if you really asked me honestly which cereal I would like, I would pick Lucky Charms over plain Cheerios. The marshmallows will get me basically every time. I don’t love the S’mores altogether, but for snacking purposes I like the variety of the three different parts to keep it interesting. The Cookies & Cream is a solid second and I would walk right on by the Strawberry Shortcake like they were plain yellow Ticonderogas. 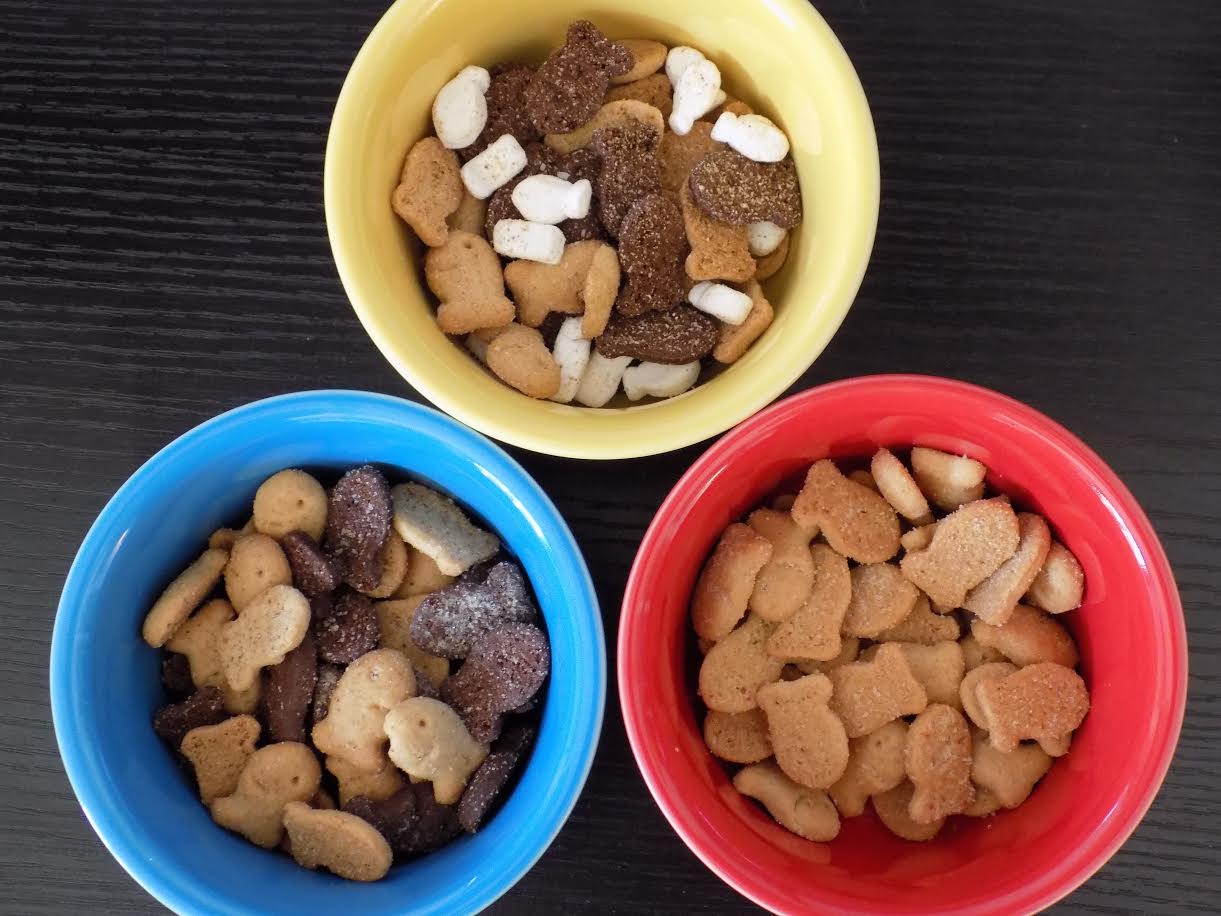 A few notes about all of them, just so you know how scientific this whole thing is. The bags have these little “open here” tabs on them which make you think they will be easy to open. They are not. The only bag that didn’t rip upon opening was the Strawberry Shortcake bag (of course, the boring one) so just accept that you will rip the bag open and pour the contents into another bag or eat all of them in one sitting. Also, the serving size on the Shortcake and Cookies & Cream were 35 pieces while the S’mores listed a serving size as 52 pieces. I guess this is because the marshmallows are significantly smaller than the cookies. The Shortcake had more sodium than the other flavors, which I noticed for some reason as if I am more concerned about sodium than anything else in the world, and I don’t know if that makes any bit of difference to you but I guess you could also take it as further proof that the Shortcake isn’t worth buying.

Feel free to try these and let me know what you think and how exactly right I am about all of them. Comment below!