Interview with The Gluttonous Geek

Interview with The Gluttonous Geek

I’m here with you today to share a fun and inspiring interview with Catherine of The Gluttonous Geek. Keep reading to find out about #pokeNOM, some great geek-inspired recipes, and what fandoms inspire Catherine’s cooking. 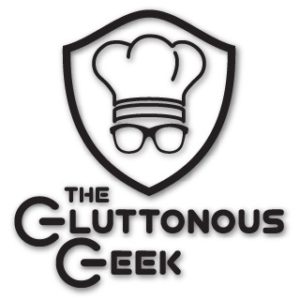 1. Tell us a bit about your blog and what inspired you to start it.

The Gluttonous Geek is a blog dedicated to the world of fandom and food through inspired recipes, interviews, and reviews on books, film, comics, video games, etc. I also post my recaps of geeky cooking classes, dining events, and travels around the world (when I can actually afford to go around the world. I’m still not finished writing about my honeymoon to England and Scotland, yet. Already planning a trip to “Middle Zealand” in 2018 with my roommate and husband). I also do a feature called “Cosplay in the Kitchen” where I have my cosplayer friends join me and we cook dishes inspired by their characters/costumes. When I get my programming together, I will be starting a video series as well on Youtube. 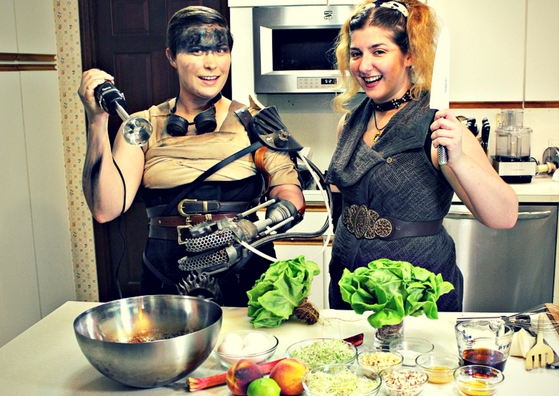 I guess my life sort of prepared me in all sorts of different ways to start this blog. I’ve always loved stories and make believe and wanted to bridge the gap between fantasy and reality. When my family and I lived in England from ’89 to ’92, there was a large wooden wardrobe in our house and I would spend hours in there, waiting for Aslan to take me away to Narnia. It wasn’t until I moved to Atlanta and was about to start college that I found a thriving geek community that would be willing to make believe along with me. Cosplay, ren fest, and table top RPGs were fun and all, but there was always a little of a disconnect lurking in the background.

I didn’t really start getting in depth into cooking until I got my own apartment in 2011. I got hooked on Top Chef, as well as the computer game that came from it. I also hated seeing ingredients go to waste, so I’d try out various flavor combinations to experiment (and to use up things before they went bad). Later on my friends were having a cookie swap which inspired my “Gambit’s Spiced Chocolate Cookies with Bourbon Caramel Icing” which later won Battle & Brew’s cookie competition award for “best tasting”. The man I was dating at the time (who would later become my husband) pushed me to keep creating and exploring this new found talent after this. I won the top prize the following year with my “Applejack’s Zap-Apple Cornbread Sugar Cookies”.

It wasn’t until early last year when my roommate, geek fashion blogger Briana Lamb (or better known as “The Lady Nerd” wanted to do a “Dinner and a Movie” segment on her blog that the idea of The Gluttonous Geek came about. I cooked up recipes she had chosen all over the web to feature, and eventually I made up Victorian English/Thai fusion recipes to go along with Anna and the King. I found myself studying the source material and doing character analysis using food.The segment never really got off the ground, but I realized where my passion and calling was.

Food, in a sense, is what bridged the gap between fantasy and reality. My English degree had trained me to look beyond the surface, study the context, draw conclusions, and create something new to learn from the material. I may never meet Tyrion Lannister in real life, but I can at least share a meal with him and taste every bite of Pork and Pine Nut Coffyn that he tasted at the Purple Wedding. I may never be able to go to the real Hogwarts, but I can still nosh on some savory pumpkin pasties from the trolley. I will never attend Peeta and Katniss’s wedding, but at least I can make them an Appalachian-style stack cake. 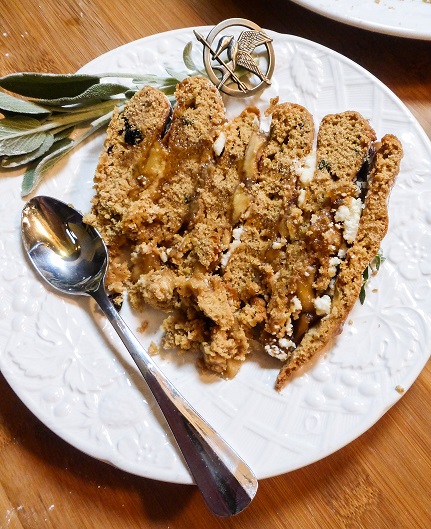 Wedding Cake for Katniss and Peeta

2. What is PokeNOM? What other events have you hosted on your blog?

#PokeNOM is a collaborative event I and my other food blogger friends on the Facebook group “Fandom Foodies” started where everyone creates Pokemon-inspired dishes this month, posts them on their respective blogs, then links them on the link up post on the host’s blog (which in this case, happens to be mine). Whenever someone makes a post, we share it to our respective social media to share each other’s audience among our community.

This is the first link-up I’ve hosted, but this was actually a continuation from last month’s link up: #RedwallAugust, hosted by Diana on Fiction Food Cafe, where we all cooked dishes from and inspired by Brian Jacques’s Redwall series. This wasn’t the first time I collaborated with her as we and Carrie from Witchy Kitchen also did a David the Gnome inspired set of recipes last year.

#RedwallAugust became so popular, though, that we decided to continue. I happened to have an open calendar for September, and thought Pokemon might be a good theme with the popularity of PokemonGo. I mean, there are hundreds of Pokemon to choose from, the possibilities are endless. So far I seem to be the only one morbid enough to consider the idea of cooking and eating those cute little creatures, but the month is still young. 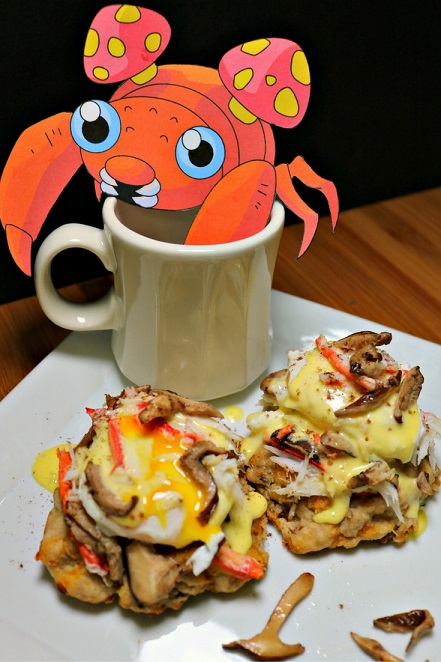 We’re not stopping at Pokemon, though. We have the rest of the year and some of next year already planned. Next month will be recipes inspired by Tim Burton films, or #Burtoween, hosted at the Witchy Kitchen. November will be themed off the Zelda series and hosted by Bryan at Lvl.1 Chef. We even have #Nyanuary for recipes inspired by fictional cats coming up at the beginning of next year hosted by Katharina at Pretty Cake Machine.

3. What fandom, in your opinion, has the best fictional foods?

I’m going to be a bit cliche and say G.R.R. Martin’s Song of Ice and Fire series has some of the most creative food descriptions I’ve seen written, I like how he incorporates it into his world building to flesh out each region. Brian Jacques of the Redwall series comes in close second for me, then Suzanne Collins’s Hunger Games series.

So far though, I’ve really been enjoying the creativity of video games with food such as World of Warcraft and the Fallout series. The availability of consumables really gives me great recipe fodder for future posts.

I will admit, there are only two, five ingredient recipes on my blog and they’re both for booze. There’s this eggplant, curry, and brie casserole I make sometimes that only has five-ingredients, but I’m saving it in case a recipe contest pops up.

My favorite 5 recipes, though, are:
–Fallout 4’s Radstag Stew – venison stew in the pressure cooker with vodka and nuka cola 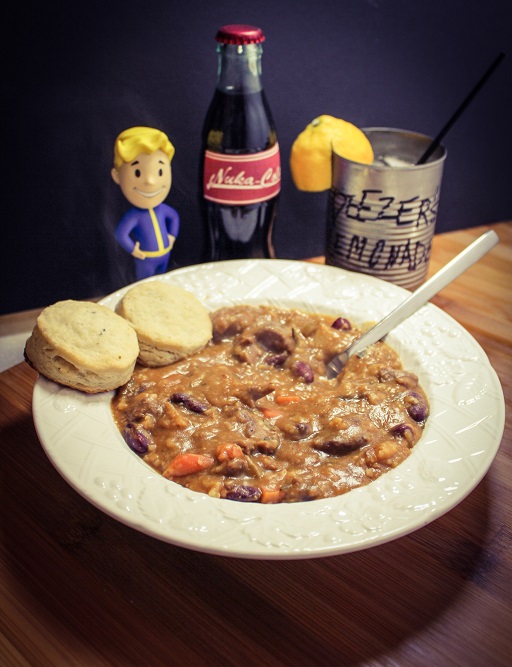 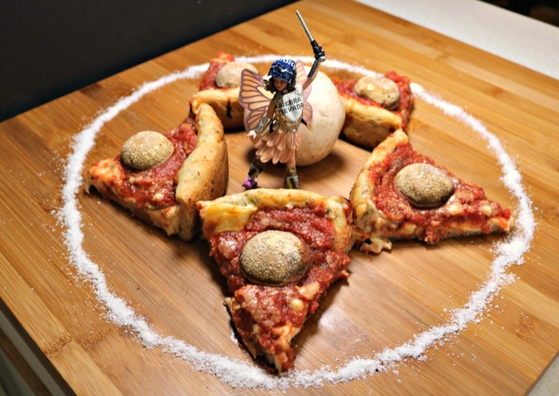 5. What would be your favourite kitchen gadget that you couldn’t live without?

Can I have two? First and foremost would be my heavy duty Epica immersion blender. It blends homemade soups in less than a minute. I’m also addicted to hollandaise sauce and it emulsifies it perfectly.

The second would be my electric pressure cooker. It takes half the time of a slow cooker, and it’s done well for nights where I need to write or photo-edit a post instead of cook. Someday I’ll be able to cook and write full time, but until then, can’t argue with pressure cooker chuck roast.

6. What are you current top 5 geek loves?

1. Star Wars
2. Game of Thrones/Song of Ice and Fire
3. The Dresden Files
4. Bioware games like Baldur’s Gate II and DragonAge
5. Story and RPG Podcasts like The Adventure Zone and The No Sleep Podcast

You can find Catherine of The Gluttonous Geek here: