Comfy at Comic Con: When you want to go out but you don’t want to go all out

Home/General/Comfy at Comic Con: When you want to go out but you don’t want to go all out
Previous Next

Comfy at Comic Con: When you want to go out but you don’t want to go all out

Greetings fellow costume lovers! I just love Comic Con, don’t you guys? I went to New York Comic Con in 2011 as Ponyo, and I felt like every 10 minutes I was getting stopped by someone for pictures. And truthfully, that was fabulously fun and nice for my ego too! But sometimes, you really want to have the time to yourself, be comfortable, scout out the tables, score some swag from Artist Alley, and observe the other over-the-top costumes at the Con. But it’s Comic Con – you can’t show up without a costume!! Dilemma! Fear not, fearless readers. I’ve made a few tips for how you can go out, without going all out!

Gijinka is a Japanese word which means “humanization.” You may have heard of the term when people describe Pokemon cosplays. Gijinka is a way to turn a cute little creature into a more anthropomorphic being. But how exactly are you supposed to do a Metapod cosplay when it’s a – well, a Metapod. Easy – you can Gijinka yourself in any number of ways!

The great thing about Gijinka is that no matter what you attempt to try to “Gijinka-fy” – you will always be doing it right! Here are some pro-tips for your Gijinka.

Ah the hipster… “Hipster-fying” any cosplay is easy, funny, and memorable. All you need to do is design a modern day hipster variation of that character’s outfit. Take Hipster Disney Princesses, for example… 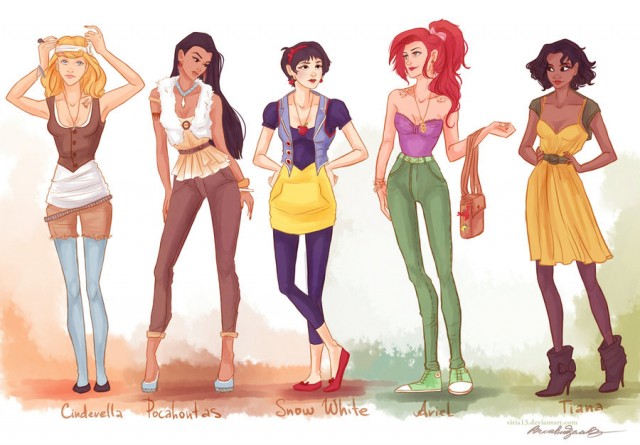 These obviously aren’t your big old hoop skirt Disney Princess gowns of yesteryear… these are modern, but obvious variations on their outfits. I think this cosplay tends to work well with the most memorable of characters, so don’t pick something too obscure. Disney works well because… everyone loves Disney. Grab your $3 Buddy Holly glasses and you’re good to go! Make sure to make obvious in character references as to how you knew about X before it was cool.

Maybe you’re less than creative, but still interested in some kind of cute animal-esque costume. In comes Kigurumi, which again is another Japanese word (What’s up with these Japanese people and creative words for types of costumes?) which stems from 2 words which mean “to wear” and “stuffed animal” … this is sounding amazing already, isn’t it? In actuality, there are several types of Kigurumi, including Anime Kigurumi or Animegao… which are horribly disturbing and will probably give me nightmares… and Fursuits, which do look very huggable, but are probably too warm, and might get you involved in some kind of weird sex party thing. Don’t ask. The kigurumi I’m talking about are the pajama Kigurumi, which awesomely, also double as comfy house clothes! 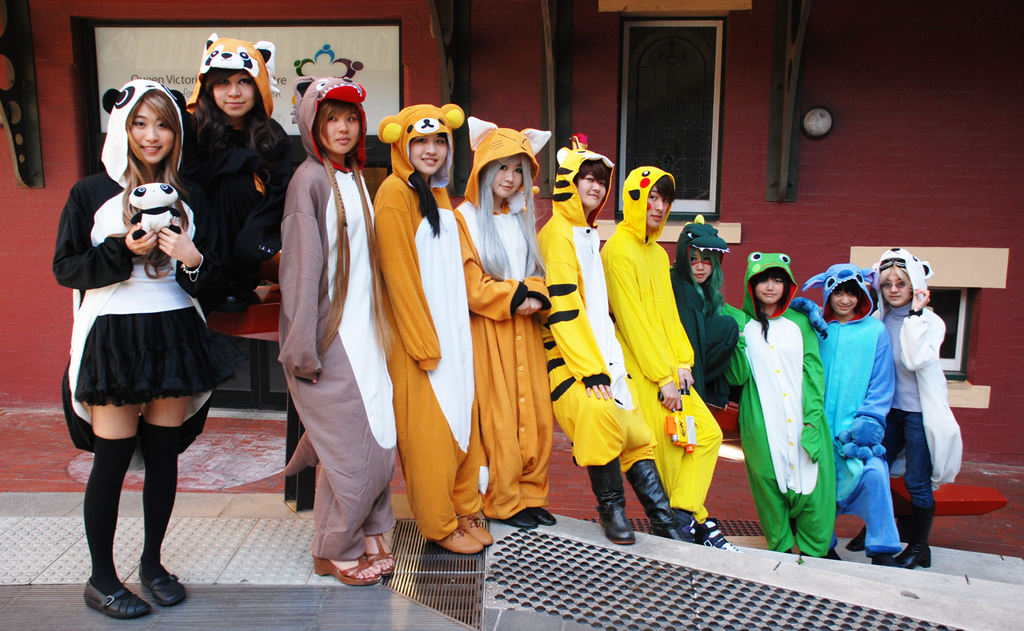 The great thing about pajama Kigurumi, is that they come in a variety of popular characters and animals, and many of them are fairly cheap. You could be a Unicorn for only $20, a cute Totoro for only $30, Gloomy Bear for only $30, or a flying squirrel for $40. And be sure to shop around. The cheapest Kigurumi’s I have found have been on eBay. If you’re in the USA, I recommend Kigurumi-Shop.com which is California based, so you’ll be sure to get your Kigurumi quick and you won’t have to wait for long overseas shipping times. Plus, if you share their $10 off offer on Facebook, you’ll get $10 off. It’s a good deal!

4. Disneybounding… or any kind of bounding.

Disneybounding is similar to your “Hipster” cosplay, but not specific to hipsters and no glasses required! Disneybounding, or any type of bounding, is pulling inspiration from characters into every day outfits. To some, they may not even know you are “bounding” – but to true blue geeks, it will be an obvious costume! And you don’t have to be limited to Disney characters, oh no! The Nerdy Girlie has a fantastic segment called “Everyday Cosplay” in which she designs simple and easy cosplays from whatever she has lying around! Perfect for being comfy at Comic Con. 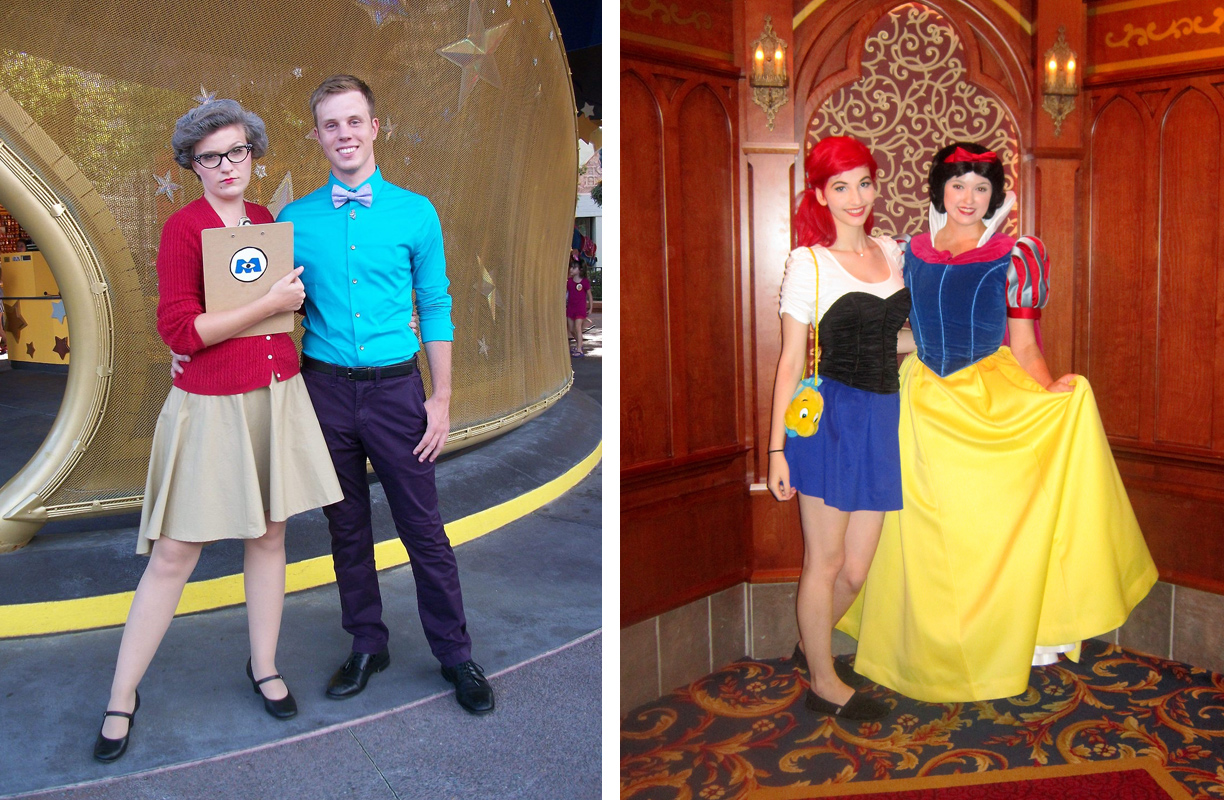 Daisy and Donald Duck Via DisneyBound.Tumblr.com

For more Disneybound magic, check out the source, Disneybound.Tumblr.com. You won’t be disappointed.

It’s as simple as that! Any of these tips will help to make your Comic Con experience immersive, but comfortable and laid back. And honestly, we all need a costume break every once in a while. These tips give you the chance to be creative and comfortable. Speaking of Comic Cons, be sure to check out our Facebook Events to see if we’ll be at a Con near you! Thanks for reading! PS: I wrote another post in this vein that you can check out if you are so inclined.
Read it here!

Stewie is a designer, Disnerd, and Internet pixie. Her goal in life is to spread whimsy, love, and friendship to the farthest reaches of the galaxy. Oh, and to one day meet an Ewok. Follow her on twitter @darlingstewie!