I received this book from the publisher in exchange for an honest review.

Science fiction tells stories that apply to today, makes comments on our current situations, and often in settings that could be our future. And sometimes those tales grab you and force you to think about so much more than what is written on the page. Salvation Day by Kali Wallace is one of those stories.

From the moment I received my advance copy of Salvation Day I was all in. It’s billed as a story with mystery, horror, science fiction, and survival and I was intrigued by the author. Kali Wallace has a PhD in geophysics and uses her love of science to help build her story. My intrigue was not disappointed. I don’t want to spoil anything for you, so please forgive my vagueness in the coming paragraphs

Salvation Day is one of those rare novels that gives you room to breathe while also stealing your breath. The harrowing moments on space craft had me feeling claustrophobic. And the clues to the mystery are brilliantly dropped before you leading you to discover the answer before it is revealed. And yet somehow the reveal is that much more astonishing and meaningful.

But the book is so much more than the horror and the mystery; at its core, it is about humanity, about our past and the lessons we do or don’t learn.

The past is a mirror and only by examining it can we examine ourselves.

This story is about humanity’s survival, and about how humanity, and governments, treat others. There are lessons and warnings about immigration, destruction, fear, isolation, cults, and more. There is hope and there is love despite the horrors and cruelties in this book. There is love in this story, between two males, and it is natural and just there, as it is in our world.

I loved and devoured this book written by Kali Wallace. It’s one I can and will read again and again. I highly recommend you read it too.

Salvation Day is available from Berkley on July 9, 2019. 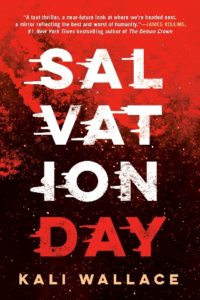 A lethal virus is awoken on an abandoned spaceship in this incredibly fast-paced, claustrophobic thriller.

They thought the ship was a haven. Zahra knew every detail of the plan. The House of Wisdom, a massive exploration vessel, had been abandoned by the government of Earth a decade earlier, when a deadly virus broke out and killed everyone on board in a matter of hours. But now it could belong to her people–a separatist cult, exiled from Earth–if they were bold enough to take it. All they needed to do was kidnap a young man–the sole survivor of the tragedy and the last person whose genetic signature would allow entry to the vast spaceship, empty save for the orbiting dead. But what Zahra and her crew could not know was what waited for them on the ship–a terrifying secret buried by the government. A threat to all of humanity that lay sleeping in the cold reaches of space. And now it is awake.

Kali Wallace has had a lifelong passion for science, earning a PhD in geophysics from the University of Colorado Boulder after studying geology and physics at Brown University. Salvation Day is the first novel where she has been able to combine her love of writing and science, but she has also written two young adult novels, Shallow Graves and The Memory Trees. She lives in San Diego and can be found online at kaliwallace.com and on Instagram @kaliphyte.