DC Ink, the new young adult graphic novel line from DC, has just released its third title. DC Ink titles are standalone stories, not part of DC’s ongoing continuity, and completely accessible to new readers who have no previous knowledge of DC characters. And the latest release, Teen Titans: Raven, is a perfect introduction to a teenage Rachel Roth aka Raven.

Raven has always been one of my favorite characters in comics. When I heard the Teen Titans, and Raven specifically, were going to be making their way into the DC Ink line, I was ecstatic. The news that Kami Garcia (Beautiful Creatures) would write this new take on Raven only furthered my excitement. And she and artist Gabriel Picolo did not disappoint. 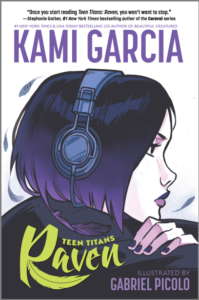 I loved this book. Kami Garcia writes Raven exactly as I would expect and the art is absolutely perfect. But beyond that, I’ve fallen in love with a new character – Max. Max is Raven’s foster sister who provides an anchor to Raven from their initial encounter in the book and beyond. Max and Raven both have secrets, but they accept each other without prying or forcing those secrets out. There is a shared understanding between these two teenage girls that feels so encouraging.

While the book begins with tragedy, that has a lasting impact, it doesn’t dwell on it. It would be easy to go full dark mode with Raven and her story. But, there is a lightness here that is appreciated. It’s perfect for young teens and a very easy entry point into the life and story of this amazing character. Plus, the artwork is stunning! I want just about every panel enlarged and framed for my walls, especially the ones with the Raven shadow. 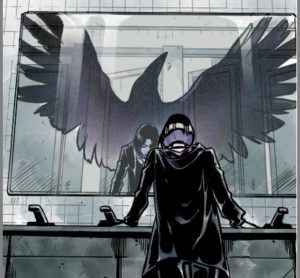 My one question – do teenagers really drink coffee regularly nowadays? (Also, I feel old writing and questioning that).

I can’t wait to see how Raven’s journey continues (and Max’s too). I want to see what happens next with the list of kids a certain someone has. And of course, I look forward to meeting Beast Boy and the others!

When a tragic accident takes the life of seventeen-year-old Raven Roth’s foster mom–and Raven’s memory–she moves to New Orleans to live with her foster mother’s family and finish her senior year of high school.

Starting over isn’t easy. Raven remembers how to solve math equations and make pasta, but she can’t remember her favorite song or who she was before the accident. When strange things start happening–impossible things–Raven starts to think it might be better not to know who she was in her previous life.

But as she grows closer to her foster sister, Max, her new friends, and Tommy Torres, a guy who accepts her for who she is now, Raven has to decide if she’s ready to face what’s buried in the past…and the darkness building inside her.

Kami was a teacher for seventeen years before co-authoring her first novel on a dare from seven of her students. If she isn’t busy watching Supernatural, Kami can teach you how to escape from a pair of handcuffs or bake a Coca-Cola cake. She lives in Maryland with her family, and their dogs Spike and Oz (named after characters from Buffy the Vampire Slayer). Visit Kami at www.KamiGarcia.com and @kamigarcia on Twitter.

Gabriel Picolo is a Brazilian comic artist and illustrator based in Sao Paulo. His work has become known for its strong storytelling and atmospheric colors. Picolo has developed projects for clients such as Blizzard, BOOM! Studios, Harper Collins, and DeviantART. Connect with Gabriel on Twitter at @_gabrielpicolo.