Who loves a good heist? Or a story that protects the more marginalized people from the schemes (and illegal drug trade) spread by those in power? I know I certainly do! So, it’s no surprise that I jumped at the chance to read the latest book in The Streets of Maradaine series by Marshall Ryan Maresca.

The Streets of Maradaine series began with The Holver Alley Crew. That’s where we were first introduced to the Rynax brothers. Asti and Verci Rynax are two former thieves who tried to go straight. But of course, things never work out right and they get dragged back into their old life. With a blend of high fantasy, crime fiction, and daring heists, The Fenmere Job is the latest in this series.

Any good job starts with planning, and despite a lot of meticulous planning, things never seem to go right. Especially when you throw in another character living in this world, The Thorn of Dentonhill. The Thorn is like an Oliver Queen vigilante. Marshall Ryan Maresca described his latest book as follows:

The FENMERE JOB comes out on Tuesday, and it’s pretty much the fantasy novel equivalent of the job on an episode of Leverage getting messed up because Oliver Queen showed up.

But with magic and pie and tragic circumstances, so also Pushing Daisies.https://t.co/zJz5Tp9h2k pic.twitter.com/79Jd7KxEST

With a description like that, how can you not be interested? And this book continues to lead us to some of the bigger plot threads. After you finish The Fenmere Job, we can all anxiously await People of the City in October 2020. This book ties plot threads from the four Maradaine series come together, or so Marshal Ryan Maresca says. We will find out then. But until then, it’s a great chance to catch up on all the books and read the latest with the Rynax brothers again.

The Fenmere Job is available February 25, 2020 from DAW Books. 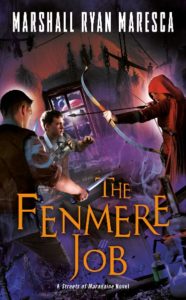 Mixing urban and high fantasy, the third Streets of Maradaine novel follows the crew of outlaws led by the Rynax brothers as they struggle to save Holver Alley from a new threat.

Asti learns that Josie plans to smuggle the drug efhân through North Seleth, which can only mean she is in league with the Fenmere cartel. The Rynax brothers want to wait for the right moment to strike at Josie, but they and the rest of the crew agree that they have to stop the efhân shipment, keep the drugs out of their neighborhood, and stop Fenmere from getting a toehold on the neighborhood.

One more problem: The Thorn. The vigilante from Fenmere’s part of town has come to North Seleth, looking to burn Fenmere’s whole empire down to ashes. When the Thorn’s strike collides with the crew’s operation, the delicate peace in the neighborhood crumbles, and an all-out war between mages, gangs, thieves, and the Thorn might fill the streets of Maradaine.

Marshall Ryan Maresca’s work has appeared in the Norton Anthology of Hint Fiction and Rick Klaw’s anthology Rayguns Over Texas. His novels The Thorn of Dentonhill, A Murder of Mages, The Holver Alley Crew, and The Way of the Shield each begin their own fantasy series, all set in the port city of Maradaine. Learn more and get in touch on Twitter, Instagram, and at Marshall Ryan Maresca’s website.