An interview with Jon Negroni, author of Killerjoy

Home/Books/An interview with Jon Negroni, author of Killerjoy
Previous Next

An interview with Jon Negroni, author of Killerjoy

If you’re looking for a new book to sink your fantasy-and-superhero loving bibliophile teeth into, have I got a recommendation for you: Killerjoy, released this week, blends high fantasy with superheroes in a brand new world from debut novelist Jon Negroni. Jon is a writer and film critic out of the Bay Area in California, well known for his creative movie theories and commentary.  This week I had the privilege of chatting with Jon about his writing process and the new book.

1. Hi Jon! Can you tell us a little about yourself?
I’m a bit all over the place. I review movies and TV shows for multiple outlets. I host a movie podcast for one of those outlets. I’m a copywriter. I make weird videos on YouTube. And somehow I also write fiction. I don’t sleep, basically.

2. Your previous book, The Pixar Theory, was based on a viral blog post. What inspired you to write Killerjoy?
I’ve spent years thinking about and analyzing movies I both love and despise. Same goes for television. I’ve also been an avid reader for a number of years, but I have very little patience for most books. That’s a personal failing, honestly, but when I do get immersed in a good book, it’s a better feeling than watching some of my favorite movies and shows. Killerjoy was born out of a desire to cultivate a story based on everything I’ve learned so far about what truly provokes our imaginations. It also makes use of some of my favorite storytelling elements, merging science fiction, fantasy, and even comic books into a hopefully coherent world and narrative.

3. Was switching genres from film criticism to high fantasy difficult?
Not for this novel. By the time I wrote Killerjoy, I had spent a handful of years publishing serial fiction on my own website. This helped me overcome my initial timidity that does come from shifting writing styles. It gave me my voice, essentially, which was enough of a starting point to get Killerjoy on paper. I will say, though, that my background in criticism has made me a textbook over-thinker. So it was challenging to accept that my story would have flaws and make me a bit vulnerable, but I managed to work through this. If anything, I believe it helped me write the best book I could possibly write at the moment.

4. What kind of books do you enjoy reading? Do you have a favorite author, series, book?
I honestly stick to fantasy for the most part. Now and again I’ll pick up an especially good science fiction or general fiction story, and I like to go back to some of the classical literary fiction that influenced me as a teenager. Ernest Hemingway and Raymond Carver, for example, will always be my key inspirations when it comes to artful language and narratives. These days, I get much more enjoyment out of adventures and meaningful world building. C.S. Friedman is probably my favorite author, along with Neil Gaiman, George R.R. Martin, and Brent Weeks. The Magister Trilogy is one of my favorite series of all time in how it showed me the power of a beautifully crafted scene and believable female characters. Gaiman’s American Gods was instrumental in helping me find my nihilistic tendencies. And Martin and Weeks are true masters in unmatchable world building.

5. What’s you’re favorite thing about writing? Is there a “best” part of the process?
The best part about writing is writing. Specifically when you realize that writing isn’t just putting words on paper. It’s everything. It’s coming up with the scenes in your head. It’s writing background stories that are only for you. It’s even editing. It’s absolutely the experience of noticing that your characters write themselves (every writer remembers their first time with this, I hope). I suppose if I had to pick a favorite out of the process, it would be reading the work aloud to my fiancé and letting her react.

6. What are your top five geek loves?
My geek loves include Pixar movies (of course), A Song of Ice and Fire (including the show), anything involving Zorro, superheroes in general, and indie graphic novels.

7. We’re ordering pizza! What’s on yours?
Bacon and mushrooms. Hopefully the pizza was made in New Hampshire. 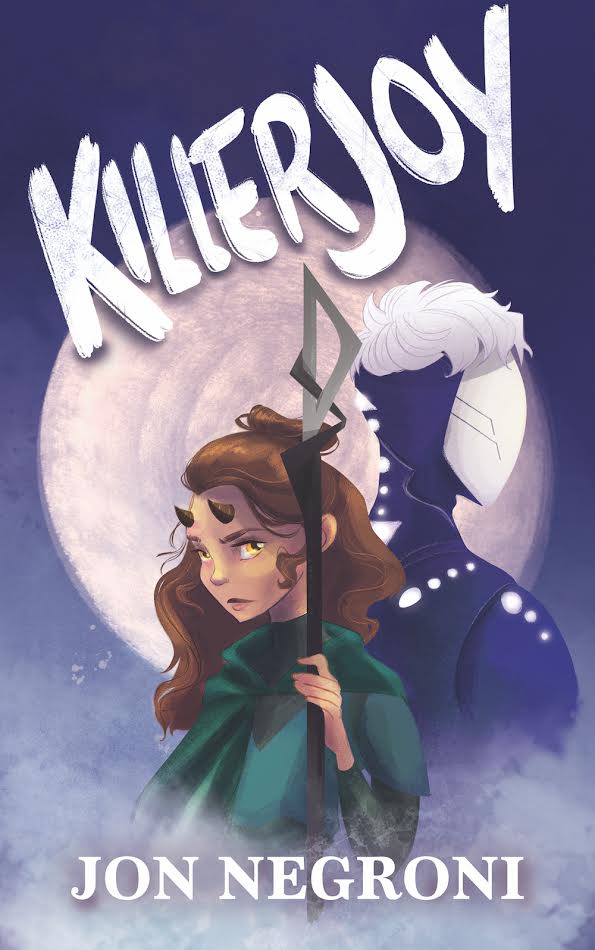 Vast cities. Ruined kingdoms. And superheroes-for-hire.
In the old world, they called themselves wizards and mages. Now, they’re the lords of mettle, sworn to defend the dominion and its colony cities…for a price.
But as new threats of dangerous monsters and desperate armies creep the horizon, unlikely heroes may rise in the form of an outcast of the lords named Exa, who can walk through walls. And a young, troubled man named Attle, who gets recruited by a society of masked rogues. Their plan? To oppose the lords at any cost and save the dominion from a mysterious creature that may doom them all.

Killerjoy is now available for purchase! You can pick it up here, and let us know if you give it a read!