Wonder Woman is Not Just a Great DCEU Film, It’s a Great Film

Wonder Woman is Not Just a Great DCEU Film, It’s a Great Film

Thanks to a wonderful moment at Wonder Con (meeting Patty Jenkins at a Wonder Woman meet-up), I had the opportunity to attend the premiere of Wonder Woman in Los Angeles, California on May 25th.  If you follow me on social media, you already know I LOVED the movie. But due to the review embargo, I couldn’t tell you why I loved it so much. Now I can! Photo courtesy of the author

Here are my thoughts on the Wonder Woman film.

But first a warning: There may be a lot of ‘Wonder’ references, but there will be no major spoilers. Also, I want to point out that I self-identify as a DC Fan Girl, but I’m also one who is fairly new to comics and not completely versed in all 75 years of Wonder Woman’s history. Now that that’s out of the way, on to the review!

First, the movie is absolutely stunning. From the lush setting of Themyscira to the harsh, drab one of the trenches at the Front, the film is simply beautiful. The contrast of the light and airy colors in a world untouched by mankind to the drabness of those areas haunted by war provide an extra emphasis to Wonder Woman’s self-determined role in the world.

Second, Robin Wright is magnificent. While her accent could be a little strange at times, it was easily overlooked by her gorgeous fierceness. I would love to see so much more of Robin Wright’s Antiope. In fact, overall the acting in the movie is superb. Chris Pine plays Steve Trevor with an earnest brilliance.  Towards the end of the film, his heartfelt speech to Gal Gadot’s Wonder Woman about men and their choices is perfection. Gadot does a brilliant job portraying Diana’s wonder at all that is new to her in the world. The crowd at my screening definitely chuckled when she saw a baby for the first time. And Pine plays the perfect straight man to her explorations of the human world.  And let’s not forget Lucy Davis and David Thewlis. Or Ewen Bremner. Or Said Taghmaoui. Or Eugene Brave Rock. Each actor embraced and embodied their role and I have absolutely no complaints and a myriad of compliments. 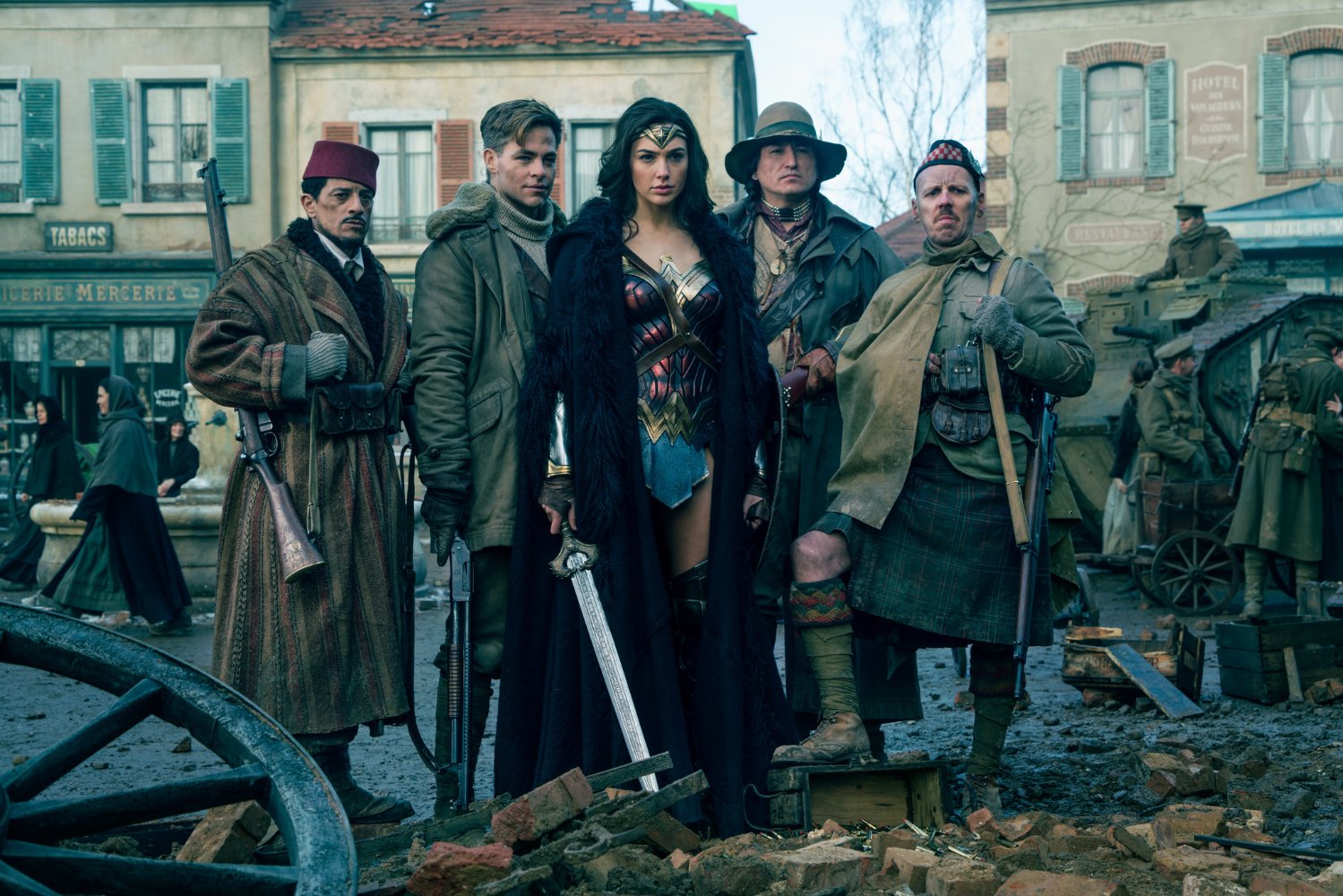 photos thanks to IMDB

The movie has humor and heart, while also speaking to the atrocities of World War I and the choices made by men.  The humor is well-placed and light-hearted. There are a couple of times the humor seems to extend a tad longer than necessary and feels a bit forced (almost like it tries to make a point that a DCEU movie can be light-hearted).  That said; I loved the innuendo between Pine’s Steve Trevor and Gadot’s Wonder Woman on Themyscira.  It sets up the path of their relationship, which is brilliant, with one minor exception (in one particular scene, I felt like Steve Trevor should and would have walked away, but he didn’t). But this gripe probably has more to do with the perceived (or lack thereof to be more precise) passage of time.  At some points, the movie does feel rushed getting from point A to B.  I’m not saying I need an Indiana Jones plane path on a map to show the time passed during travel, but some other indication may have been useful at times.

The holier than thou so-called comic “experts” will complain about the movie, because that’s what they do. They’ll make reference to the BDSM tendencies of Wonder Woman’s creator, to the various versions of Steve Trevor (including one who actually married Etta Candy), the various origins of Wonder Woman in the comics, and more. Are there things to quibble about? Yes. But they are minor. Plus, the genius of the DC world often lies in the existence of the Multiverse. I, for one, am able to accept different stories and takes on characters because of the Multiverse concept. As long as a particular take remains consistent with the stories in its own universe (DCEU vs. DCTV vs. comics), I’m more than happy to take it as truth in that world. And Wonder Woman IS consistent within the DCEU.  I liked the simple but effective way the story was connected to the more modern events of other DC films.

The Spirit of Wonder Woman

But beyond the consistency, the film has remained true to the overall spirit of Wonder Woman herself. Overall, this movie does a perfect job of depicting an iconic character. They’ve captured her spirit, her fierceness, and both her vulnerability and her invincibility. At Wonder Con, Patty Jenkins and Geoff Johns talked at length about how Wonder Woman is the best fighter in the DC universe, but she fights only because she feels she must. She is about what’s right, perhaps even more so than the beloved Man of Steel. She fights to protect and to promote love and peace. And the film is true to that concept.

Over and over in the movie, Gal Gadot stands up for her beliefs against those around her. There are several points in the movie where we are treated to Wonder Woman in all her glorious strength, but perhaps none are quite as powerful as that moment when we see her see stride across the length of “no man’s land” between trenches was no less than magnificent (not to mention tearful for many in the audience, me included). 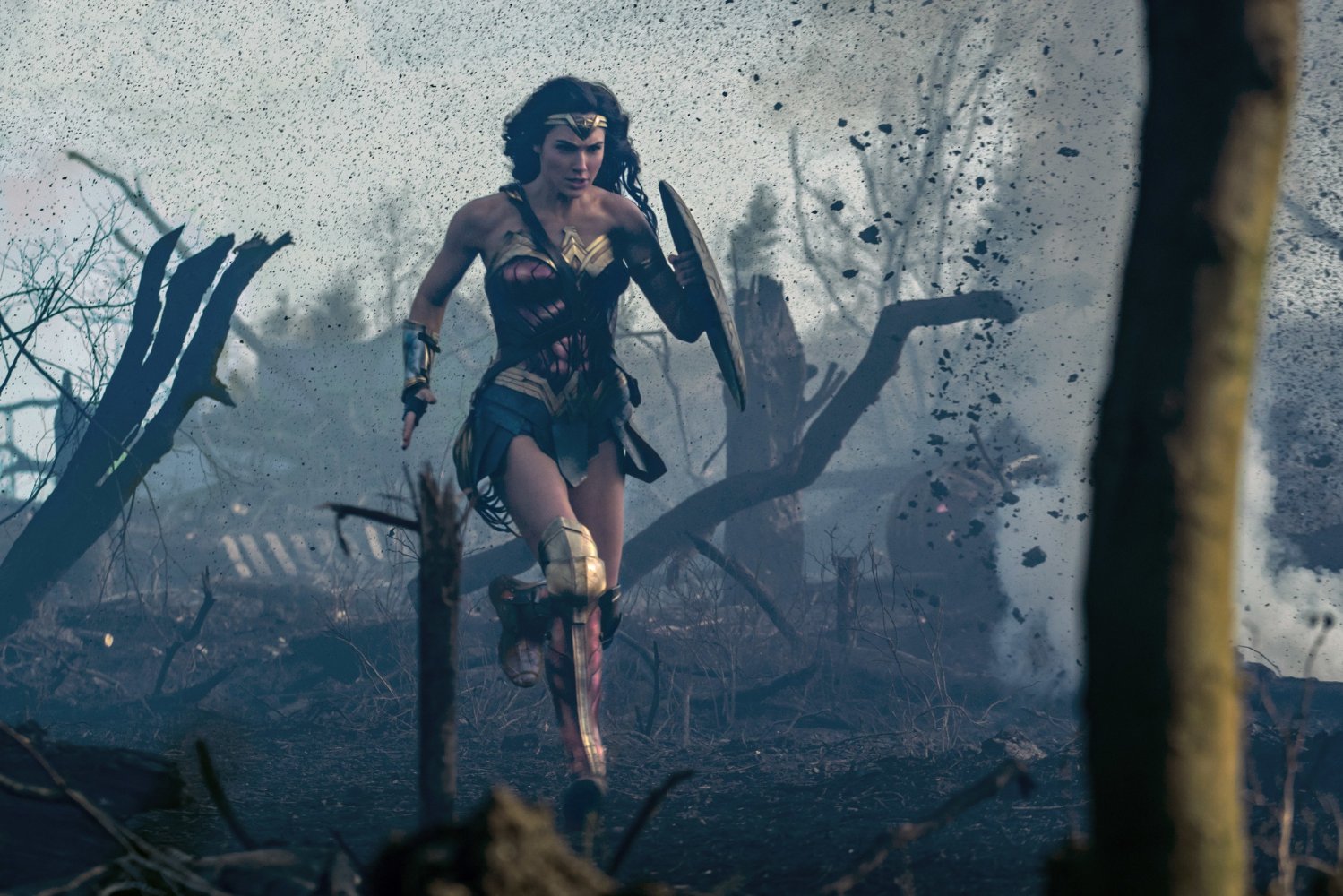 photos thanks to IMDB

I saw the film two days after the attack in Manchester.  The movie, though filmed and completed well earlier, felt especially relevant and powerful (and also very sad because it means we continue to struggle with the horrors of war, hate, and violence).  But that also means we continue to need Wonder Woman.  So thank you Patty Jenkins, Geoff Johns, Gal Gadot, Chris Pine, and everyone else for not only bringing us a big screen depiction of an icon that we wanted, but also one that we needed.

Suffice it to say, I think everyone should go see Wonder Woman. It’s relevant and beautiful and truly displays the heart of this iconic character. I very, very rarely see a movie multiple times in a theater (I’ve done it maybe twice and I couldn’t even tell you what those movies were anymore). I’m already planning to see Wonder Woman at least twice more in theaters. It’s not just a great DCEU film. It’s a great film, period.

And I hope you go see it, love it, and see it again!