And now, the fourth post in our blog series celebrating friendships forged through the IGGPPC. Today’s interview features two iggles who live just a few miles from each other, but didn’t find each other until they were brought together by their mutual love for geekiness and snail mail!

It’s IGGPPC’s birth month, and what better way to celebrate the club’s second birthday than by featuring stories about friendships that have formed via our lovely club? Once a week, we’ll post an interview with a pair of pen pals, who will share their stories of snail mail and international adventure. To read last week’s Tale of Two Pen Pals featuring Meg and Rosa, click here.

Michigan, USA
House GLaDOS
Shelby tweets at @shelbyfromthtwp and blogs at Shelby From the TWP. 
How did the two of you first get in touch?

Toni: I found Shelby on the old IGGPPC site (back when it was through ning). There was a “search by location” function and saw that she was in the same area as me. The same city and everything! Luckily her profile had her Twitter handle so I send her a DM inviting her to get together. Our first meeting was delayed due to the famous 2014 polar vortex but a week or so later we were finally able to meet!

Shelby: I was actually at work the day she messaged me on Twitter, and I think there was a few hours difference between her initial message that said “Hey! You’re in the IGGPPC and are from the same town as me! Would you care to meet up some time?” Anyway, I said “Well, duh,” because I like making new friends and I figured that “this girl is from the IGGPPC, so I don’t think she’s going to be too dangerous.”

What led to you becoming friends?

Toni: For me, it was friendship at first sight. She was wearing a Captain America shirt and I knew we were going to hit it off immediately. Even at the first meetup we were talking like we had been forever!

Shelby: Hey, you know what they say: “When you know, you know.” Hahahaha! It was a nice meeting. We agreed to meet at a Biggby Coffee that’s about equidistant from our houses. There was tea. The conversation was easy because by that time we had been talking to each other on Twitter and Facebook for a couple of weeks.

Shelby: I think we sent each other Christmas cards last year? We live 5 miles from each other so just getting in the car to meet up is faster than sending each other mail.

Toni: Shelby sent me a Christmas card last year. I keep it in my special box that I have for my penpal letters and notes. We don’t send mail to each other often as we live so close to each other.

Shelby: Well, now I’m wondering where my Christmas card is.

Toni: Well, call me out in front of everyone. Haha! I’m sorry! I’m terrible at sending mail back. Ask my penpals and they’ll agree with you! (laugh)

How frequently are you in contact? Do you keep in touch in other ways, besides via snail mail?

Shelby: That way, if one method of communications fails, we have back ups. (laugh)

Toni: I’m in love with science at the moment as #SciArt on Twitter did a tweet storm in the first week of March. I also currently love Orphan Black, Dollhouse, tea, and typography art. I’m taking a class in typography right now and have always loved word art!

Shelby: Uh. Orphan Black, A Song of Ice and Fire, blogging. Can I say food and cooking is a geek love? I’m the biggest food stan on the planet. Maybe. And. Uh. I really like that CW show, The 100 lately (even though THAT season finale).

Do you have any geek loves or fandoms you bond over?

Shelby: We trade fandoms like they’re Pokemon cards. She got me into the awesomesauce shows Firefly and Dollhouse; I made her watch Orphan Black and Call the Midwife.

Toni: Oh for sure! Like she said, we each got each other into different things. We also share an interest in biology.

We hear that you live only five miles away from each other – have you met up?

Shelby: We are literally passing Toni’s laptop back and forth between the two of us to type this up. It’s been just over a year now that we’ve been friends, I think? Since the first time we met up, we try to do something once a week. That part doesn’t always work out (I usually work Friday and Saturday nights during the summer), but it’s always fun! Popcorn and tea are usually involved.

Toni: Yes, and we’re watching Dollhouse (again) as we type! Like Shelby said, we try to get together every week. I went back to school last October so my school schedule often gets in the way. Whenever we get together it is always a great time! We normally marathon a TV show or watch a movie or two. We share tea and I’ve been told I make the best popcorn.

Toni: We’ve gone to the Detroit Institute of Arts, gone letterboxing, met up at Barnes & Noble, and enjoy eating cheap sushi together. 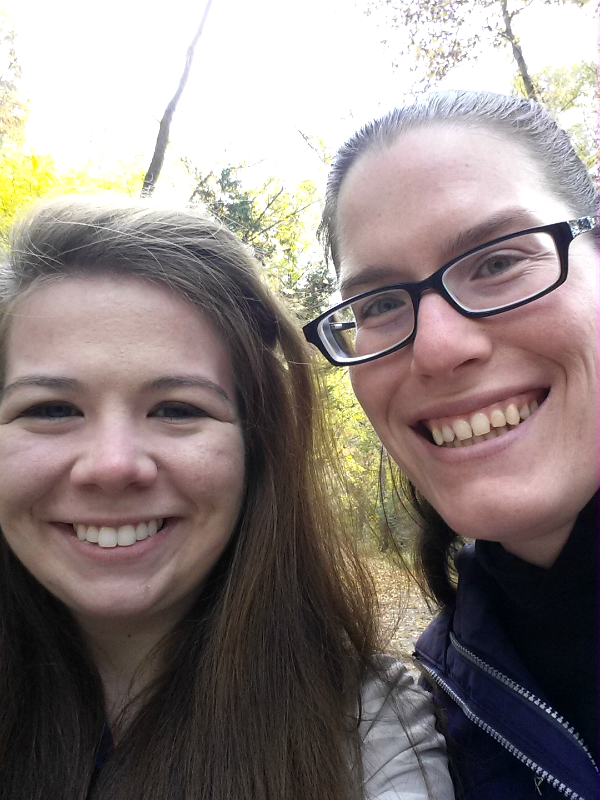 Shelby and Toni together on a recent adventure!

Toni: It’s crazy to think that without IGGPPC we probably would have never met as we’re 5 years apart in age and mostly keep to ourselves.

Shelby: Exactly. So it’s nice to have some to hang out with when you want to go do stuff (and even when you just want to watch TV and eat popcorn). I’m so happy to be a part of the IGGPPC, not just because of my friendship with Toni, but because I’ve made some amazing girl friends through the group! I hope it’s still around years and years from now!


Thank you to Shelby and Toni for sharing their fantastic story of finding friendship through IGGPPC! While I was anticipating this to be a four part series, another amazing iggle friendship was brought to my attention, so there will now be a part FIVE coming on March 31st. Get stoked, and stay tuned!!