Here at +5 Charisma we love hearing stories about iggles meeting IRL. It’s so fun to see digital friendships transcend into the “real” world (though let’s be honest, our online home is just as real as any physical space). Here is the story of two iggles, told in their own words. Enjoy!

I think we got to know each other mostly through igglechat on twitter, but we also were swapping charms in a swap. Since then we almost met more often than we send each other mail. To give you a rough idea how far apart we live there is a super-fast train going from Cologne to Paris that taken three hours and a half, but  we both live in the suburbs so there would be an additional about half an hour each. It is also the same distance as between  Philadelphia and Pittsburgh.

I had some big exams coming up in August, which ended a week before the third IGGPPC camp and I really wanted to go on vacation, but also not miss out all the fun of the camp. So I consulted my iggle friends on twitter for a solution and Hélène jumped in and said I could spend my vacation with her in Paris. I hadn’t been to Paris for over ten years, the journey is not that long and spending camp with another Iggle sounded like a blast. So we made plans for me to visit her. As luck would have it, we got to meet even before that. Her family was visiting the zoo in Cologne and I got to join them for ice cream after to get a break from studying. It was exciting for me to finally meet an Iggle in real life and also be able to tell people that I’m not just meeting a “stranger” from the internet. (My brother was really worried, my mom surprisingly not).

For camp we were even sorted into the same troop which was even more exciting. When I finally visited her I was welcomed into her home by her lovely family. Apart from the adventures we had together I learned to enjoy french food and that you can even turn a small meal into a several course meal. I even learned how to say yogurt and cheese in french. In return I thought her how to say mine, mine, mine in German while we were waiting in line for a Finding Nemo themed ride in the Disney Parks. We went on an great adventure to Disneyland I was super excited since it was my first time. It was great to go with a friend that knows the ins and outs so I could avoid rollercoasters that would make me sick, not miss the Parade and know where to best get a fast pass or go single rider.

We also went on a walk on a near by hill to enjoy the view of Paris.

On the third day we went into Paris and met up with two other lovely Iggles in the most amazing nerdy Bar after a bit of sight seeing.

The next day camp started, and we joined in the camp activities together and made an online camp a real live camp [Hélène: Yeaaaaaah, that was awesome!]. We sweded “the Birds” (this mean we took the movie and made our own version with the things we had on hand like in the movie “be kind rewind”). We made the birds out of origami paper and it was hard to look scared, when someone was throwing paper birds at you. We burst out into laughter a lot. We made some cookies to which the recipe got lost in conversion so they were not that delicious and mostly burned, but still they were cookies. So we ate them while watching Harry Potter with our troop. The s’mores French toast turned out so great, though, we made it twice. 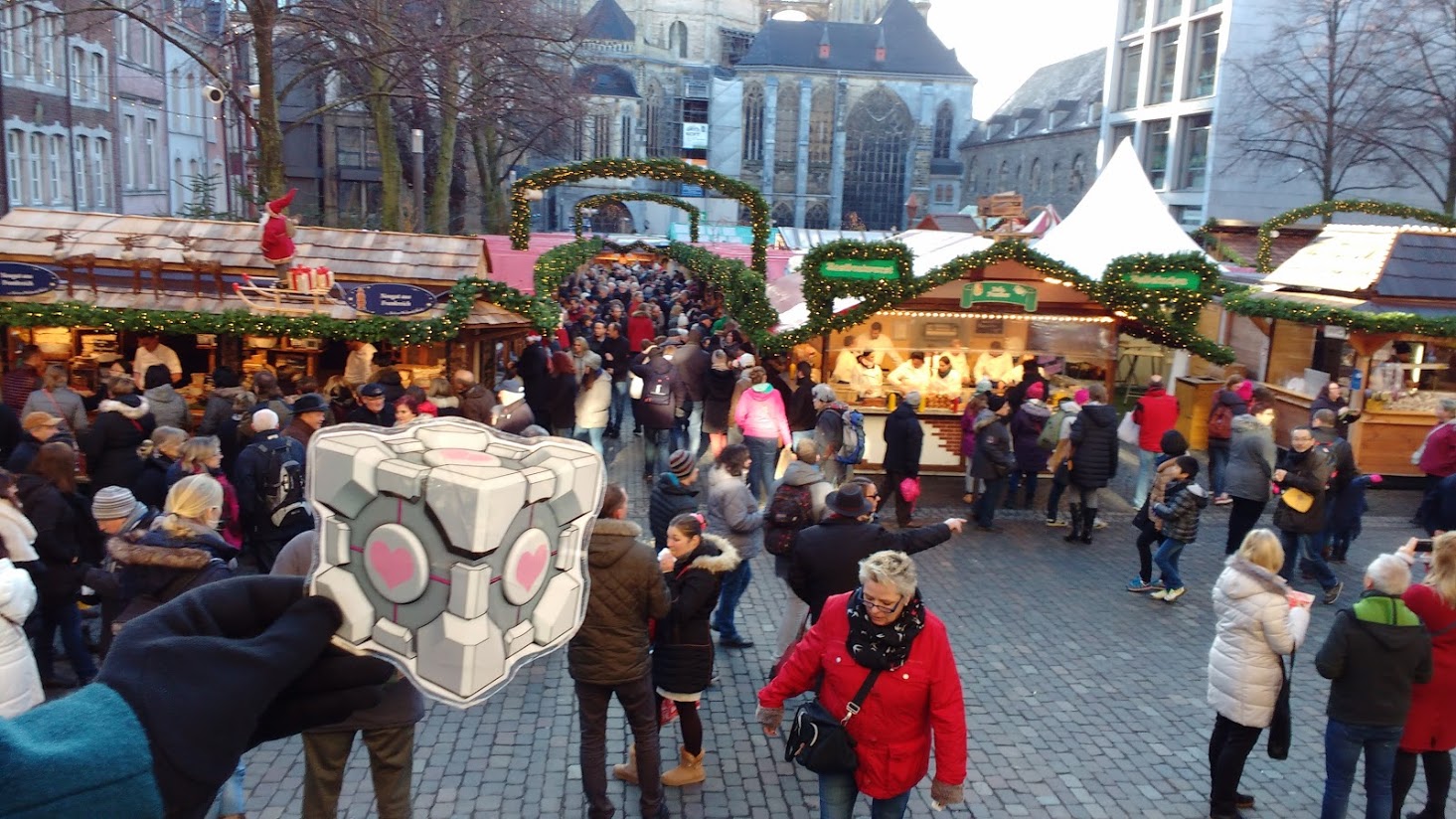 the christmas market with faltcube

When my parents heard how great my stay was they wanted to welcome Hélène into their home and since my hometown is famous for its Christmas market we met up again for a weekend in December [Hélène: I was welcome like a diplomat and it was a really nice week-end]. Before we visited the Christmas market in Aachen, we went to the chocolate factory to stock up on chocolate. There a culture clash happened: while it is common in France to pay with credit card you are not able to pay with it in all shops in Germany [Hélène: 😀 Story of French people abroad^^]. While we were visiting the Christmas market we could also see some of the sights like the old cathedral, since the market is taking place around it and the town hall. The next day we visited the point where the Netherlands, Belgium and Germany meet. 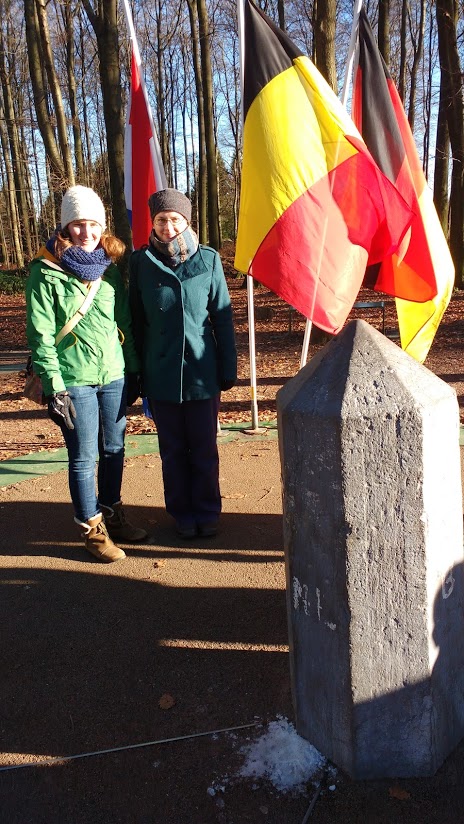 us at the poin where the three countries meet

Even so we were “just” internet/ penpal friends it was always easy to make conversations and there was never an awkward moment when nobody knew what to say, and when we didn’t know the English word for something language it didn’t stop us since some of the words are the same in French and German like Kompot/ compote. We still don’t know what the English word is. (The editor would like to add that it is also “compote” in English– we took that one straight from the French!)

The last time we met (hopefully not for long) was at the beginning of this year, when I finally finished my law degree and decided the best way to celebrate was to visit Disneyland and also Paris. It was a last minute trip so I was super happy to hear that Hélène and two other Iggle friends had time to have dinner with my boyfriend and me. It was a night filled with pleasant conversation, laughter and a huge amount of couscous, which apparently is the French’s second favourite food. We feel like meeting in real life has strengthened our friendship we had then.

We hope to meet again this year with another iggle friend from Portugal.

Have you met another Iggle in real life?

Meike lives in Cologne, Germany and has finally finished her law education. She gets exited about all things super hero or disney. If she is not at work or super tiered you are most likely to find her on her floor among craft supplies/sewing supplies either crafting, sewing or writing snail mail or both. She also recently discovered the out doors for herself so you might also run past her sitting outside writing and singing along to Fifth Harmony, Vaiana/Moana or Hamilton. Feel free to hit her up for a chat on twitter @crowlovescore or follow her on instagram itscrowlovescore.