FINALLY Y’ALL! I’ve been waiting FOREVER to talk with you about my not-so-secret love of murder mystery tv! And, well, now that I’ve got your attention…

In true super sleuth form, I’ve connected all the clues and cracked the case. Use the chart below to discover what detective crime drama you should be binging on Netflix* this month! 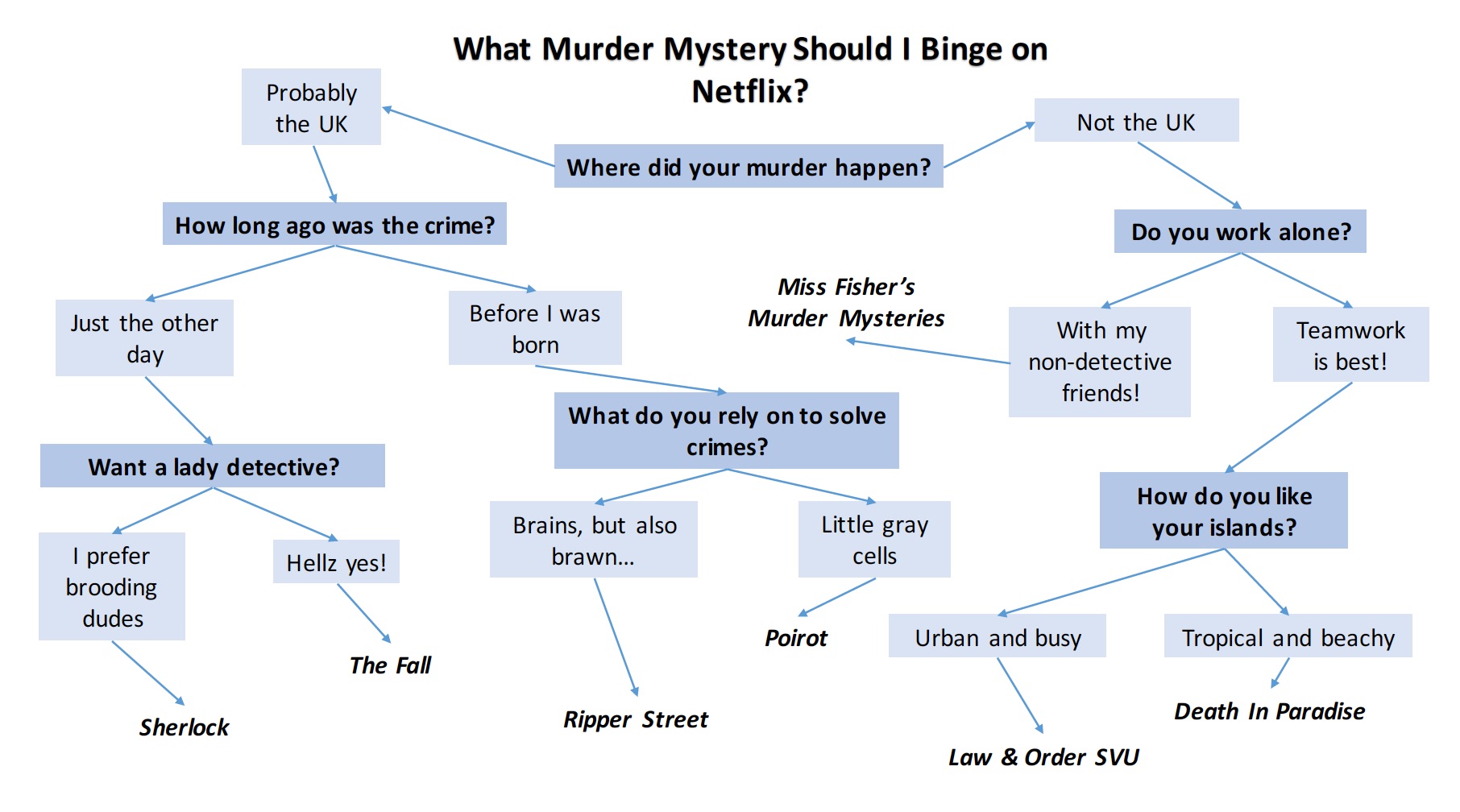 A modern take on an old classic, this show follows John Watson & Sherlock Holmes through the streets of London as they tackle complicated murders and mysterious villains. At only 13 episodes (though be prepared – they are each an hour & a half long) it’s pretty easy to binge the entire show and not even realize it!

Gillian Anderson stars as a London detective sent to Northern Ireland to help catch a serial killer (the uber attractive Jamie Dornan) on the loose. This show is stunning but gets very dark and violent. Be prepared. Like seriously, it’s amazing, but it was brutal to watch some scenes.

Agatha Christie’s famous Belgian detective is one of my favorites! While Netflix recently removed the older seasons of Poirot, the newer episodes (each clock in around 100 mins so plan accordingly!) are still up featuring some of Poirot best cases. If you are new to detective dramas, Poirot is a classic not to be missed!

Set in Australia in the 1920, Miss Fisher’s Murder Mysteries follows a brazen lady detective and her band of friends as they solve murders. Miss Fisher is fun, flirty, fashion, and fabulous. It’s a binge you’ll watch, then watch over again. I’m so in love with this show I could marry it.

About to enter it’s 19th season, L&O: SVU is one of the most successful of the L&O franchise. In my personal opinion – cause it’s the best. The cast of detectives and lawyers on this show are really what make it so great. Seasons 14-17 are currently up on Netflix, and the new season airs in the USA beginning Sept. 27th!

Taking place shortly after the reign of Jack the Ripper, this show follows Detective Inspector Edmund Reid and his team as they solve crimes in London’s Whitechapel district. There are a lot of characters and a lot of plot lines. It was hard for me to follow along the first few episodes, but by the end of my binge I was hooked!

Bored with the typical big city crime? Death in Paradise is set in Caribbean and follows an amazing group of detectives as they solve the fictional island’s murders. This show follows a very “Poirot-esque” structure introducing the crime, the suspects, and then finally pulling together everyone for the big reveal at the end!

*This is what is available on my USA based Netflix. Sorry non-American sleuths! If you need additional pointers for what to binge though, let me know!

Loves tea, manatees, murder mysteries, and the adorable noise her cat makes when she jumps on top of furniture.