The most anticipated movie of the year and, some would argue, of the last five years, has finally landed. Star Wars: Episode VII The Force Awakens opens today with much fanfare and to a fanbase hungry to return to a galaxy far, far away.

Note: I will try to be as general as possible and avoid spoilers, but given the nature of reviews, there might be something you haven’t heard yet. If you haven’t seen the movie, please proceed with due caution.

Episode VII is the much anticipated sequel to the 1983 finale to the original Star Wars trilogy, Return of the Jedi. It’s been thirty-two years for audiences and a similar amount of time for our heroes within the Star Wars universe. The Empire was defeated but not destroyed and survives in the form of the First Order, led by a Supreme Leader with Force users and a massive army under his charge. They are battling the Resistance, which has grown out of the old Rebel Alliance, supported by the new Republic. Even in the Star Wars universe, a two-party political system seems resistant to change.

The core characters were interesting and I enjoyed the dynamic between Finn and Rey. Finn is trying to find where he belongs in a world that is much more complicated than he realized, and what he finds is Rey. Rey, on the other hand, is looking for her family but clinging to a past that may not be what’s best for her. Together they create quite a duo.

The dialog in this installment is certainly better than the originals and the much-maligned prequels. Clearly these writers know how to give a good line in the midst of an epic battle that sounds like a real person is speaking. I appreciated the banter, the unexpected humor, and the classic one-liners sprinkled in for good measure a great deal. 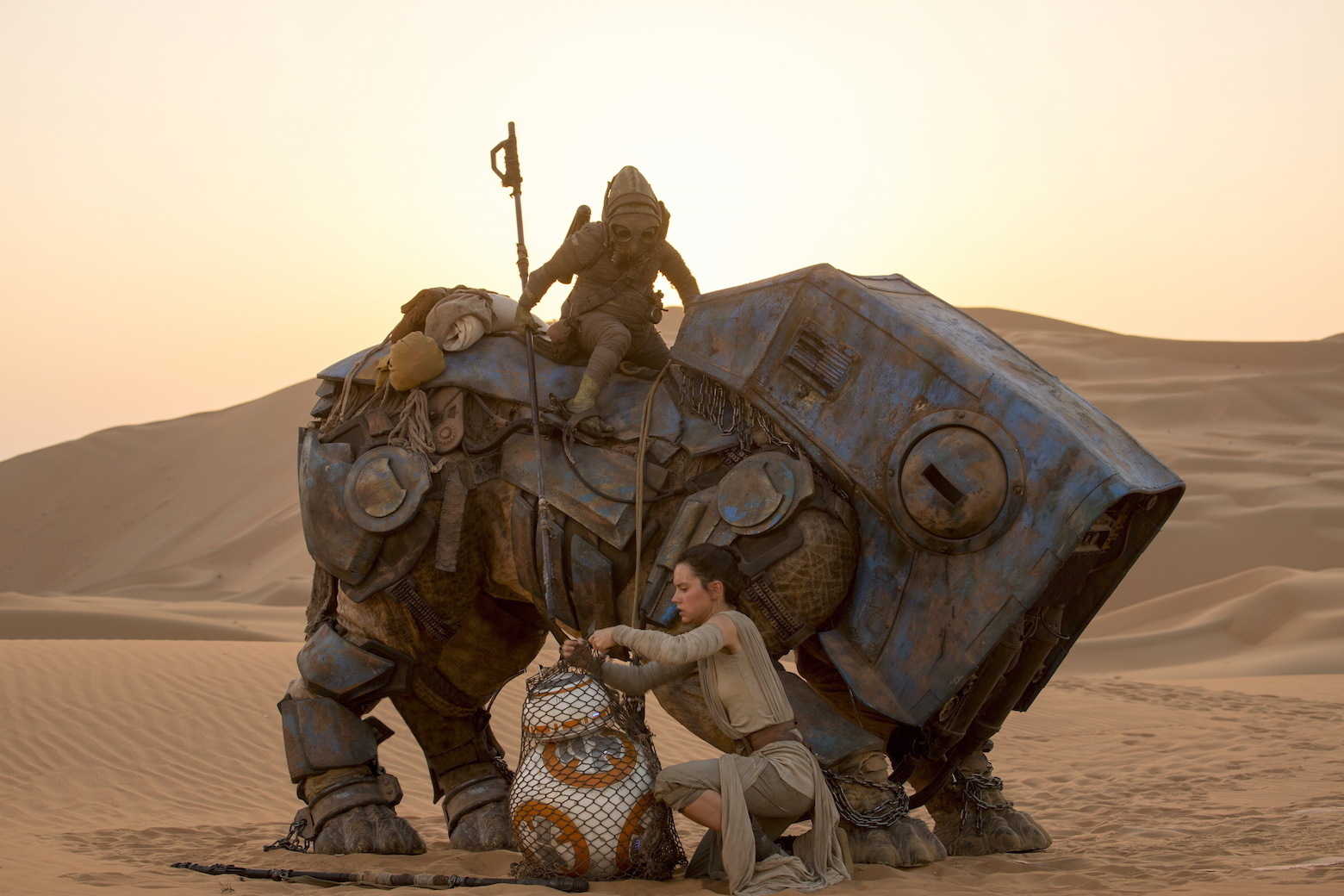 The character development in this film was quite good as well; there is a large cast of “main” characters and it could have been difficult to balance them all, but for me at least it worked to have so much depth to the world and to have familiar faces mixed in with the new. Discovering each new character as they were introduced and seeing how they interacted was one of the strongest points of the film. The peripheral characters had dimension and added a good flavor to the overall story.

As for the look and feel, this movie is not short on good aerial dogfights and action sequences. If nothing else, The Force Awakens keeps moving and doesn’t leave much time for breathing, injury recovery, or introspection. The heroes are on the run from the First Order, trying to stay one step ahead from an enemy who seems too large to be countered.

At the forefront of the First Order is Kylo Ren, a masked villain in all black who we’ve all seen in the promos with his rather interesting lightsaber. For a villain, he has reasonable (and clearly stated) motivations though we aren’t given the minutia of how he arrived where he currently is. I don’t particularly mind this; after getting the long and drawn out origin of Vader, it’s nice to have a straight forward explanation without having to watch it all play out.

After so much good, it’s hard to say this, but the plot was disappointing. As plots go, it was a pretty good one except that it is a direct retread of where we’ve been before so it felt kind of cheap. I know that the Star Wars films in general are designed to mirror one another in order to provide comparisons and contrasts within the larger story and mythology, but the pattern here is a little too familiar; a droid in a desert planet encounters someone who will overcome their modest beginnings to begin a journey via the Force, a rebellion that needs the droid and its information, a super-weapon that must be blown up to save the star system… There are other, more specific elements, too, but you can see where this is heading. The lack of original plotting, I feel, takes some of the punch out of the big twists as they happen in the film. You know what’s going to happen so the stakes don’t seem as high.

I will say I found myself wishing for another twenty minutes, despite the over two hour run-time; there could have been a third act, but instead we get the set-up for the next film and then a cut to credits. (There isn’t an end-credit scene, so don’t feel like you’ve got to stay, either.)

As a huge Star Wars fan, it’s been exciting and slightly nerve wracking to wait for this film. I have enjoyed the expansions to the Star Wars universe as we’ve been able to get them in recent months, from the Star Wars Rebels cartoon to the Disney Infinity games, and had a lot of high hopes for The Force Awakens and the other movies to follow. Those hopes still remain, though I feel like this one probably played things a little too safe. Even the biggest “twist” was not really unexpected, at least in my mind. The rest of this sequence in the big story is well set-up and I sincerely hope the success of this film will give J.J. Abrams and company the freedom to move in some new directions and not simply try to recreate what’s already come before. The original Star Wars movies are classics for good reason; there’s no need to try and replicate them when there is so much else to explore.

Overall I’d recommend The Force Awakens, whether you’re a passionate Star Wars fan or simply someone who has a taste for fun sci-fi. The dialog and CGI are well done and it feels a bit like a reunion to see such familiar characters on the big screen again. Yes, Chewie, we’re home.