The Maze Runner is the latest movie adapted from a dystopian young adult novel to hit the big screens. There’s just no getting around that this genre is what’s hot in Hollywood right now, but that doesn’t stop this movie from being worth your while. It’s interesting and intriguing in a way that your standard action movie fare isn’t, and it doesn’t get tied up in a neat bow at the end, leaving you wondering what will happen next.

This movie is told entirely from the perspective of our protagonist (Dylan O’Brien). He awakens in a bit of a panic, in what seems to be a rising, cage-like elevator, and emerges into a strange place with people he doesn’t know, no memory of who he is, or even his name for the first part of the story. He learns he’s in a large, square outdoor area with high stone or metal walls around it called the Glade, and it’s filled with young men who show him the ropes. During a celebration the first night he’s there, he suddenly remembers his name, Thomas. 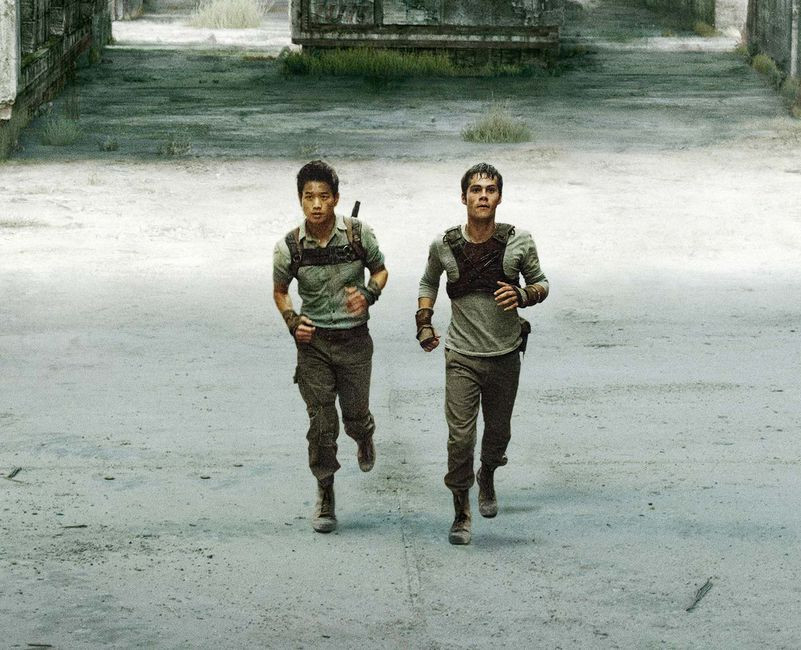 Thomas is quickly assimilated into the group, but picks up bits and pieces of information from the leader of the camp, Alby (Aml Ameen), his second in command, Newt (Thomas Brodie-Sangster), and from Chuck (Blake Cooper), who seems to be the youngest one there. They are trapped in the center of a maze that changes around them all the time, and have been for three years. Their only two goals are finding a way out, and survival in the meantime. In three years, they have established a village and rules of conduct to keep the peace in such a stressful situation, and it seems on the surface like a decent place, until you remember that they really are trapped. The mission of escape falls to the strongest and fastest of them, the Runners, led by Minho (Ki Hong Lee). During the day they search the maze, but at night the giant doors close and the maze is populated by monsters called Grievers. 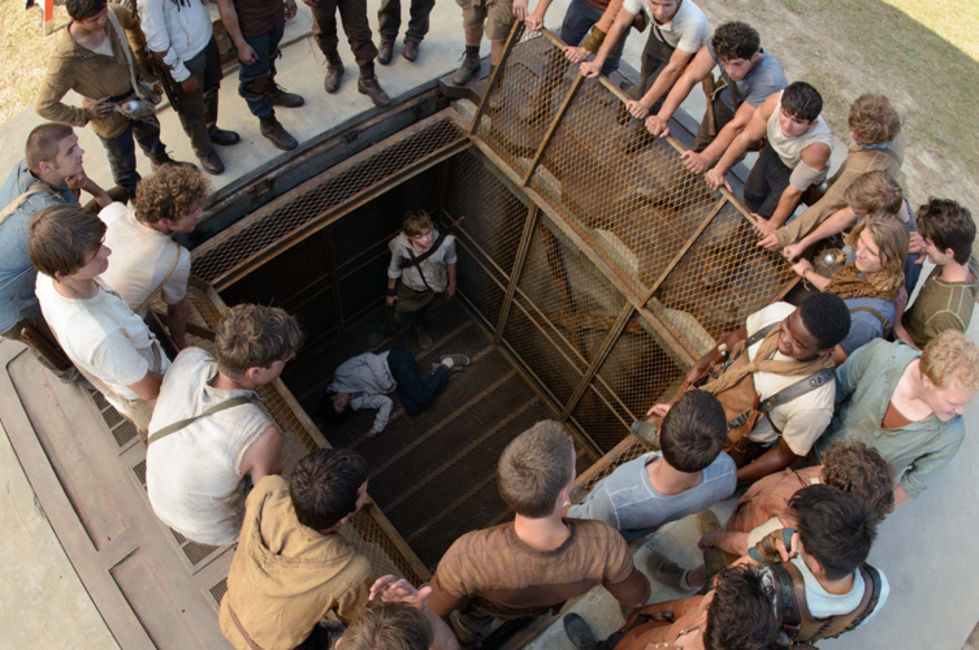 Strange things start happening after Thomas’s arrival, including the immediate arrival of the first female in the camp, ever. Teresa (Kaya Scodelario) comes out of the box and recognizes Thomas, Grievers start attacking during the day, fights break out within the group. As the balance is upset, it soon becomes clear that the only way to survive is to face the maze at last, and to try and find a way out. 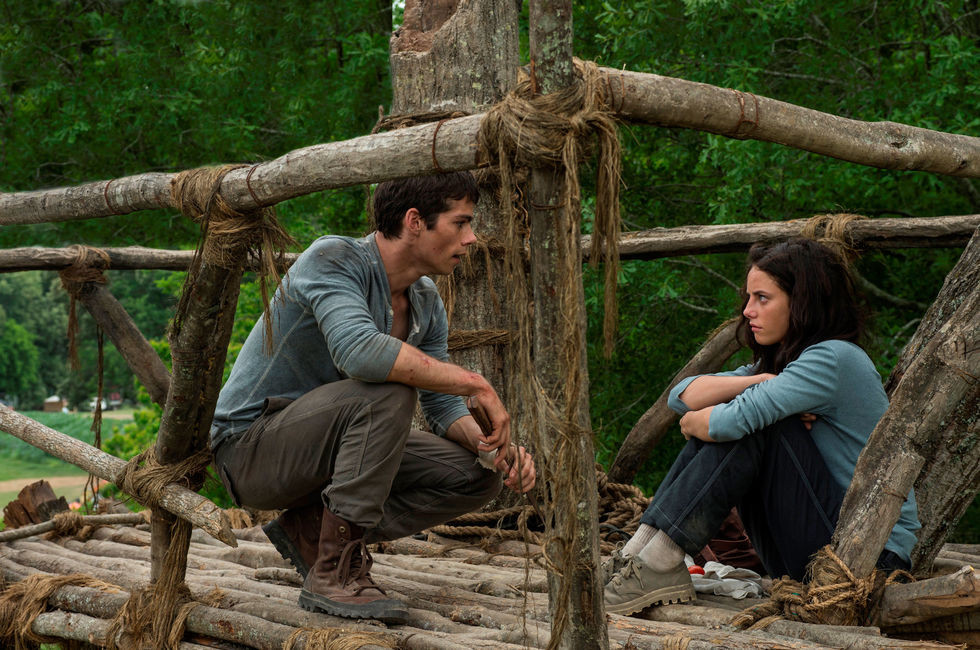 The maze is a physical thing, to be sure, but it is interesting that the people in the center are all young men (until Teresa), that they have to navigate through their biggest challenge to escape. Since Teresa is the biggest change they’ve faced, is this a story of coming into adulthood through the turbulence of puberty? Is the Glade a metaphor for structured society, the maze the challenge that must be met in order to move on to a new frontier? Are things really better on the outside? That’s the question, and it doesn’t entirely get an answer.

Unusually, this story doesn’t yet seem to have any particular political statement to make. We are given so little information, learning about things as Thomas does, that the outside world might as well not exist (and may not, in fact, exist). When we finally get a tiny glimpse of that outside, we are left with more questions than answers, and I felt compelled to hit the library or bookstore to see if I could find out what happens next. At any rate, we aren’t given a government to blame, or even explanations of who these young men really are. For all the frustration of the mystery, I liked not knowing the whole thing. 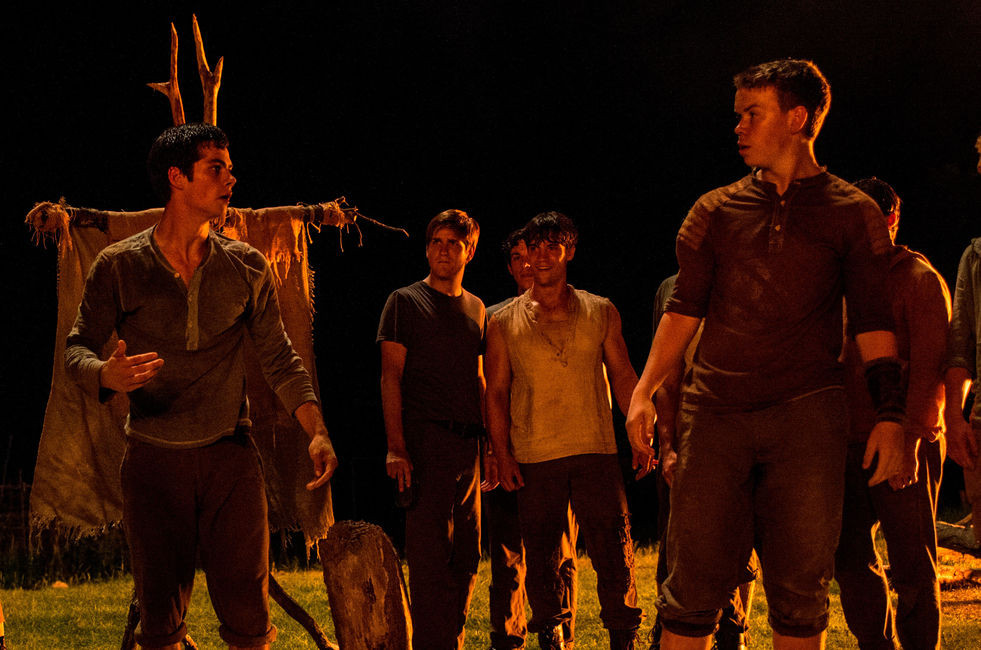 The great thing about this story is that, even though the people themselves don’t know exactly who they are or why they’re in the maze, they still want to work together, to care about each other. Even the antagonist, Gally (Will Poulter), has the best interest of the group at heart when he has conflict with Thomas. And without knowing much about them except how they behave with one another, I cared about them and their fates. They were interesting and smart and I wanted them to make it out of the maze.

I do recommend this movie if you enjoy dystopian adventure type stories. It’s a shame it came out in the same summer as The Giver, the same year as Divergent, and in the middle of the four Hunger Games movie sequence (the preview for which played before it). It may well suffer from an over-saturated market. Nevertheless, I enjoyed it and will be seeking out the books and the inevitable movie sequel.