The Hunger Games: Mockingjay Part 2 is in theaters today, the fourth and final film in the Hunger Games franchise. With anticipation for an action-packed finale after all of the build-up of the first film, this installment failed to deliver on many fronts. While it is satisfying to get a conclusion to the film, overall it was badly paced and lacked any real punch, leaving many of the characters at loose ends, and with most of them spending more time passive than actively doing anything. 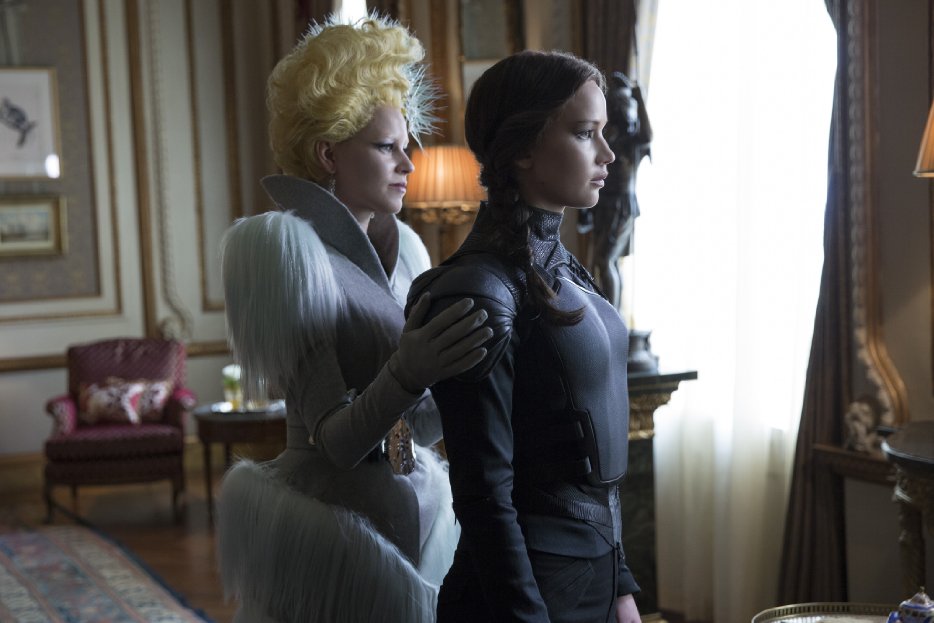 The film opens directly after where the previous one ended: Katniss Everdeen (Jennifer Lawrence) has just been attacked by Peeta (Josh Hutcherson), “programmed” by the Capitol to believe she’s the reason for the war and that she must die in order to make all of the other suffering stop. This reasoning isn’t that far off, either: Katniss has been, throughout the storyline, the catalyst for revolution in the Districts, the first to ignite the fire for change in 75 years. Unfortunately for the Capitol, at this point the revolution is coming with or without the figurehead Mockingjay.

It is at this point where the books (and therefore the films) become much more blatant in their anti-war message. Whereas before we were shown the grossness of out of control consumerism and the terrors of the Hunger Games themselves, the Mockingjay story has always been about the horrors of war, of how propaganda goes both ways and how violence begets violence in a never ending cycle with no one ever truly becoming a Victor. This movie takes the message and runs with it. 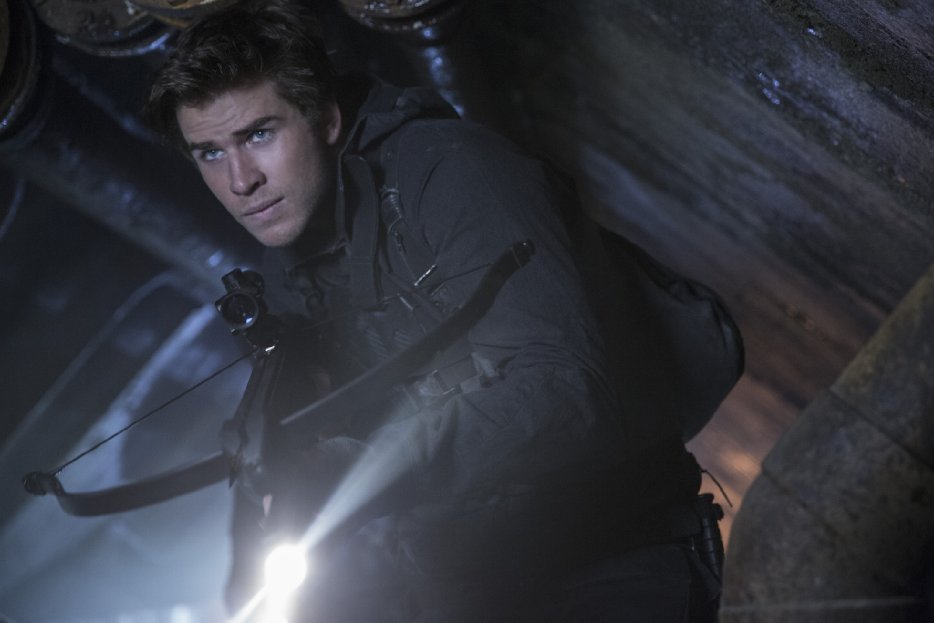 Katniss recovers enough from Peeta’s attack to head to the current battle in District 2 where the rebels are attempting to take the Capitol’s weapons arsenal. She discovers (or sees clearly for the first time) the dark side of war through Gale (Liam Hemsworth), who is willing to kill anyone he doesn’t know to avenge the ones he does know, and watches as the rebels bury a whole mountain full of people alive with a “Hey, this is war” type of explanation. Katniss is clearly upset about this total disregard for life, the “oh well” attitude toward human casualties, and we are meant to be, too. She tries to communicate her realization about the never ending death cycle to the District 2 survivors and the other rebels, but to no avail: she is shot, and it isn’t clear if it’s the District 2 survivors or the rebels who fired.

Just in case you’ve forgotten how much you aren’t supposed to like President Snow, at this point we get to see him watch Katniss “die” and then murder a member of his cabinet. The scenes with Snow are delightfully creepy, and Donald Sutherland plays the character so very well; it’s hard not to appreciate him as a villain. Alas, we don’t spend much time with him in this film, but when we do he provides the foil to the “good guys” in such a way that everything is open for questioning. 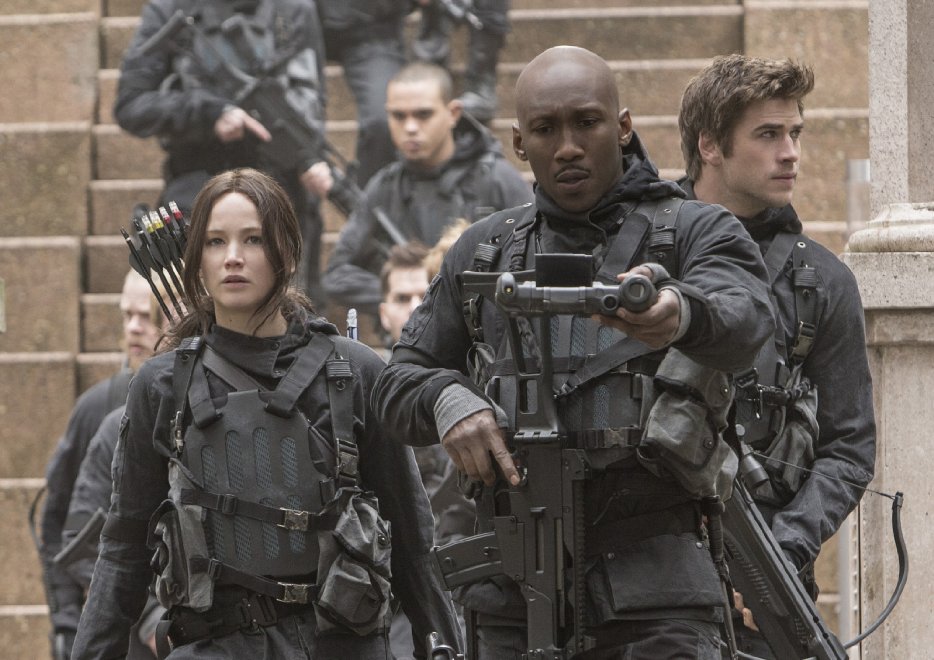 Katniss sneaks aboard a supply plane headed for the front lines despite her heavy injuries and insistence from President Coin (the leader of the Rebellion, played by Julianne Moore) that she rest and recover. Oddly, though, the injuries (which looked pretty horrible, even though they weren’t deadly) don’t seem to bother her for the rest of the film. I particularly thought of them much later when she’s diving through concrete openings in the sewers… But I guess that’s movie logic. She is discovered and assigned to a propaganda task force, though she and Gale (who also a member of the squad) still plan to go assassinate Snow.

At this point, I lost much of my focus for the movie. Though Katniss and her squad aren’t on the front lines, they are still dealing with traps set by the Capitol’s game-makers and the looming threat of combat, and yet the pacing is just…weird. There is a flurry of activity (including another “Katniss is dead” bit) but most of the film is the team resting, hiding, thinking about their next move. They “lay low” three separate times. While this repetition works in book format, in film it makes everything plod. Everything that does happen does so at a distance, or in such short bursts that the pacing remains too erratic to help the audience get pulled into the characters or their story.

The pacing doesn’t improve for the rest of the film, as it drags itself along for what felt like an extra unnecessary hour, through plenty of quiet contemplation (and the only glimmer of hope in the series) and a longer denouement than Return of the King. In fact, it’s hard to tell where the climax and ending of the story really was. 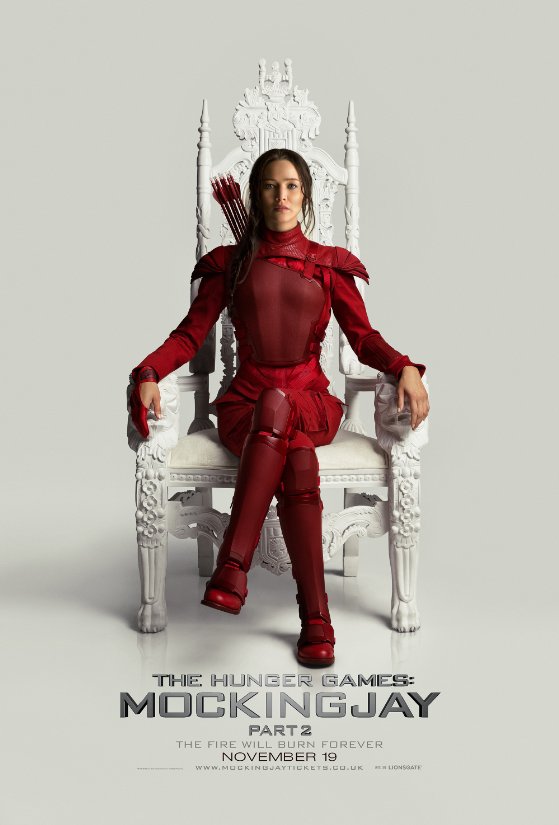 I have enjoyed the Hunger Games movies significantly more than the books, but the choppy and disjointed ending was something I hoped they’d rectify when bringing Katniss Everdeen to the big screen. While I’m glad I saw the conclusion, overall I found it underwhelming and particularly disappointing after three other long films. Mockingjay could have been a solid, exciting single film. Instead we got two movies with so much stuffing that it’s entirely appropriate for the final one opens the weekend before the US Thanksgiving holiday.

Do see the movie so you can get a conclusion to the series, but maybe hit a matinee.