Thirty-one years later, we finally go back to 1984. Terminator Genisys acts both as a (sort of) reboot and a continuation of the original films, paying homage (and paying off things set up in the previous installments) in a fun, action-packed summer blockbuster. In summary, it’s a great action/monster movie and you can enjoy it whether you’ve seen the originals or not, though I will say a working knowledge of the first two (or at least the 1984 original) will deepen your appreciation. Oh, and there is a closing credits scene, so stay in your seat for just a little while after the primary ending! Now on to the full review. 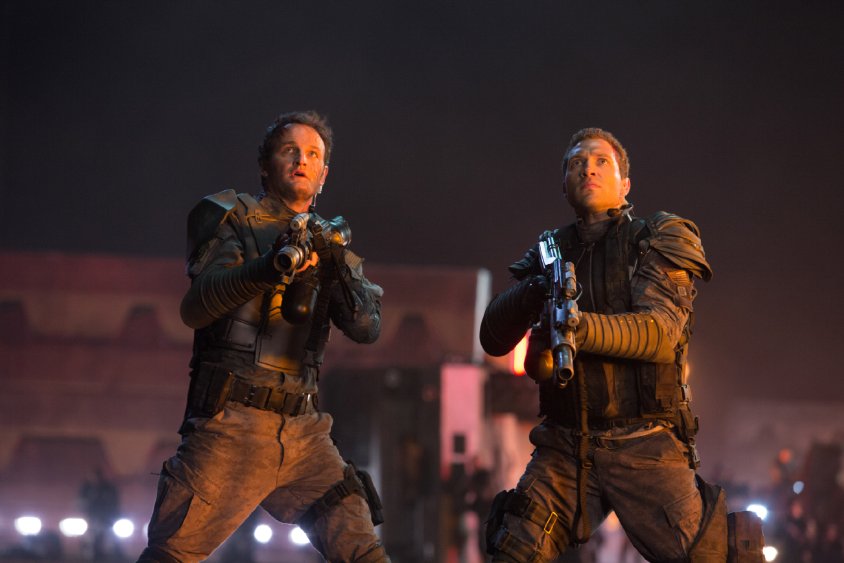 Terminator Genisys opens in the year 2029, like many of the Terminator films. Things are as expected, and we’re given enough information about Judgement Day (the day that Skynet turned all of humanity’s nuclear weapons against them and destroyed the planet in 1997) to have a solid idea of what’s at stake in the future. The set-up is as we know it from the first film: in the final moments of the war, as the Resistance led by John Connor (Jason Clarke) is about to completely defeat Skynet, the machines send a Terminator back to 1984 to kill Sarah Connor (Emilia Clarke) and prevent her from ever giving birth to John.

John knows this happens, and he knows he’s got to send his right-hand man, Kyle Reese (Jai Courtney) back in time to protect Sarah. Reese strips naked (because you can’t carry anything through time with you, because Plot Reasons) and steps onto the platform, all as expected. And then comes the twist: there is a Terminator in the ranks of the Resistance who grabs John as Reese is catapulted back in time, though a strange looking history.

We as an audience land in 1984 and at this point, the filmmakers did an absolutely fantastic job recreating the original film’s opening shot for shot. The Terminator is at the Griffith Observatory to rip a heart out and steal clothes from some 80s teenagers. Kyle Reese meanwhile lands in an alleyway and steals pants from a homeless man before being stopped by a cop. And then things take a hard turn to the left. The Terminator is suddenly intercepted by… another Terminator! And I have to say, it’s pretty fun to watch Young Arnold Schwarzenegger fight with middle-aged Arnold Schwarzenegger up there in the Hollywood Hills. Meanwhile, the police officer who intercepts Reese seems to know exactly who he is… because that cop is a T-1000, the liquid metal variety of Terminator from Judgement Day. Things are drastically different. 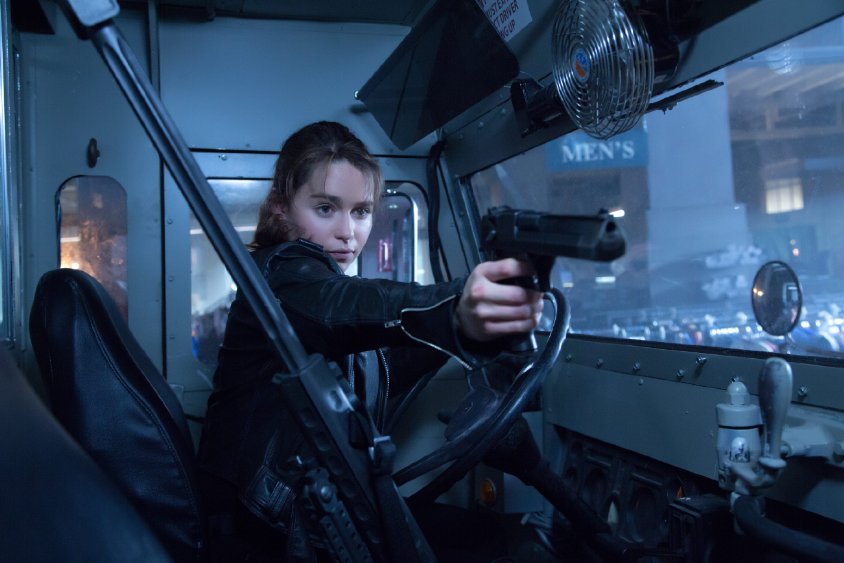 Reese runs into the clothing store (again, recreating the original shots but with changes) and is saved by Sarah Connor, who utters the famous “Come with me if you want to live” as she plows an armored truck into the T-1000. The timeline has shifted dramatically, and Reese has landed in an entirely different 1984 than the one he expected. 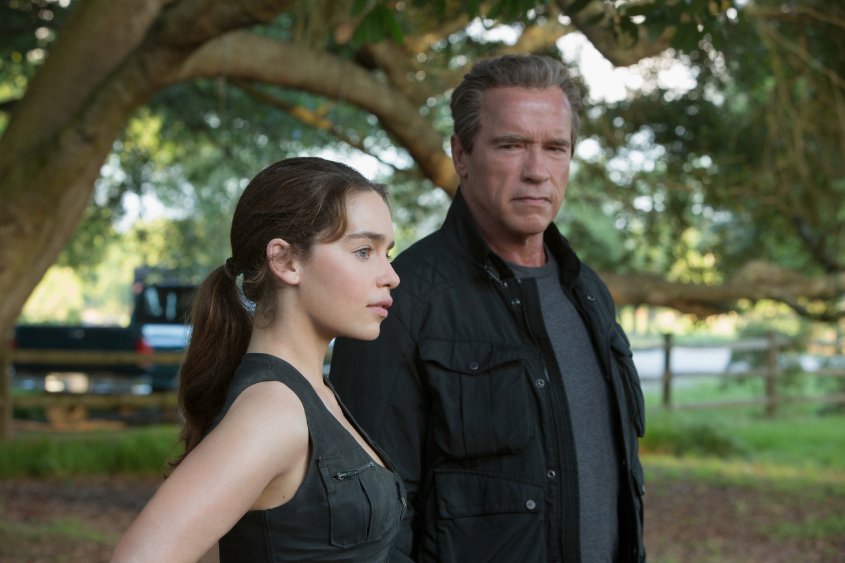 Sarah has been raised by a T-800 Guardian whom she calls Pops, and is already a skilled fighter, ready to take out any Terminator that appears. She knows who Reese is and is reluctant to develop feelings for him, though she is fascinated by him all the same. We learn that Pops doesn’t know who sent him to protect Sarah (it’s been deleted from his memory) but he has protected her since she was 9 and has aged (being covered with actual human tissue, you see, to neatly account for Schwarzenegger himself aging). 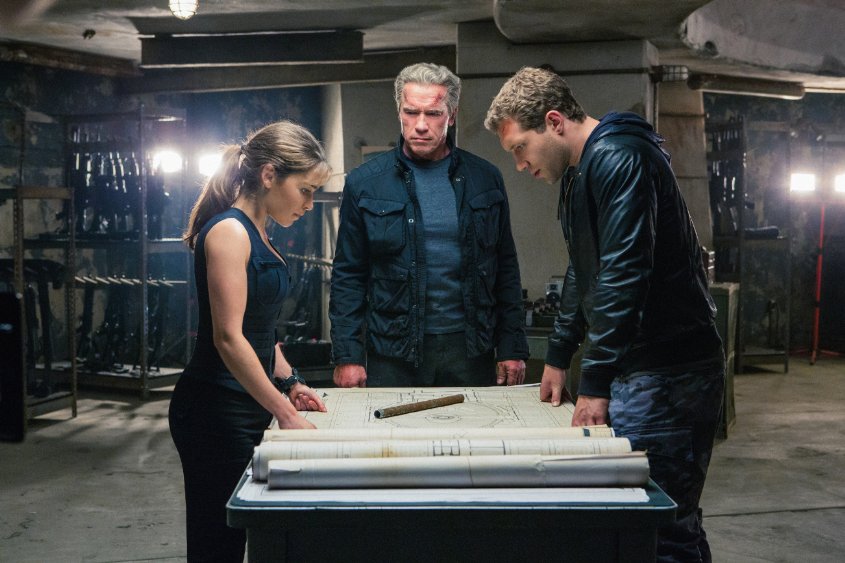 Things are so different, in fact, that Judgement Day is no longer in 1997… and how could it be, when they thwarted that day in Terminator 2? Instead our heroes must get to 2017 in order to stop the new Judgement Day from happening. The children of the 1997 software developer, who gave his life rather than be the father of Skynet, have themselves grown into brilliant software developers by then and are getting ready to take their new app, Genisys, online. I’m certain you can figure out what Genisys is.

From here I will tell you no more. There is a lot happening in this movie, but it wraps around the first two installments (The Terminator and Judgement Day) very nicely, and I enjoyed seeing the consequences of previously changing the future. There are plenty of nods to the franchise’s history and some new twists, too. 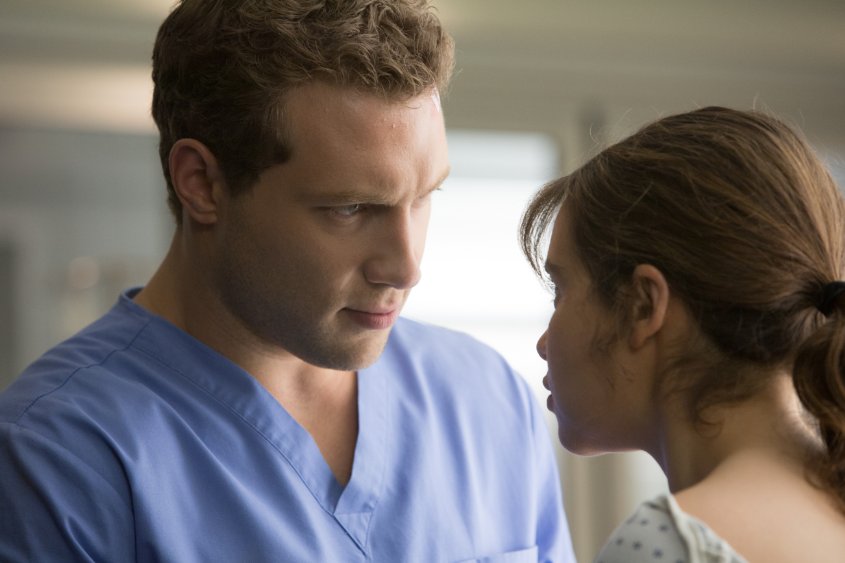 Usually at this point I tell you about the things that didn’t work for me, but I have to say that just about everything in this movie did. I’m sure there will be complaints, and I’ve seen a few who are tired of time travel movies– won’t the filmmakers just keep resetting time and do this story over and over? To that I say, just see the movie. It’s not the same story anymore. If anything, it’s a continuum, or a loop, and though similar things keep happening, the movie manages to create new threads to follow. It also maintains a sense of humor (particularly character-driven humor), with some nice deadpan and one-liners along the way, which I always appreciate. The only thing that was thoroughly predictable to me was near the end– I saw something coming a mile away with a CPU chip, but still enjoyed seeing it happen when it did.

Overall this is a fun action movie and I hope it does well in the box office. This summer is a season of throwbacks and reboots, but this one works as a good third installment (can we all just ignore T3 and Salvation?) in a franchise that’s embedded in our cultural knowledge. In my opinion, it isn’t a reboot in the true sense of things (even the casting is remarkably good; just check out Emilia Clarke next to young Linda Hamilton). We don’t need to start this one over again. 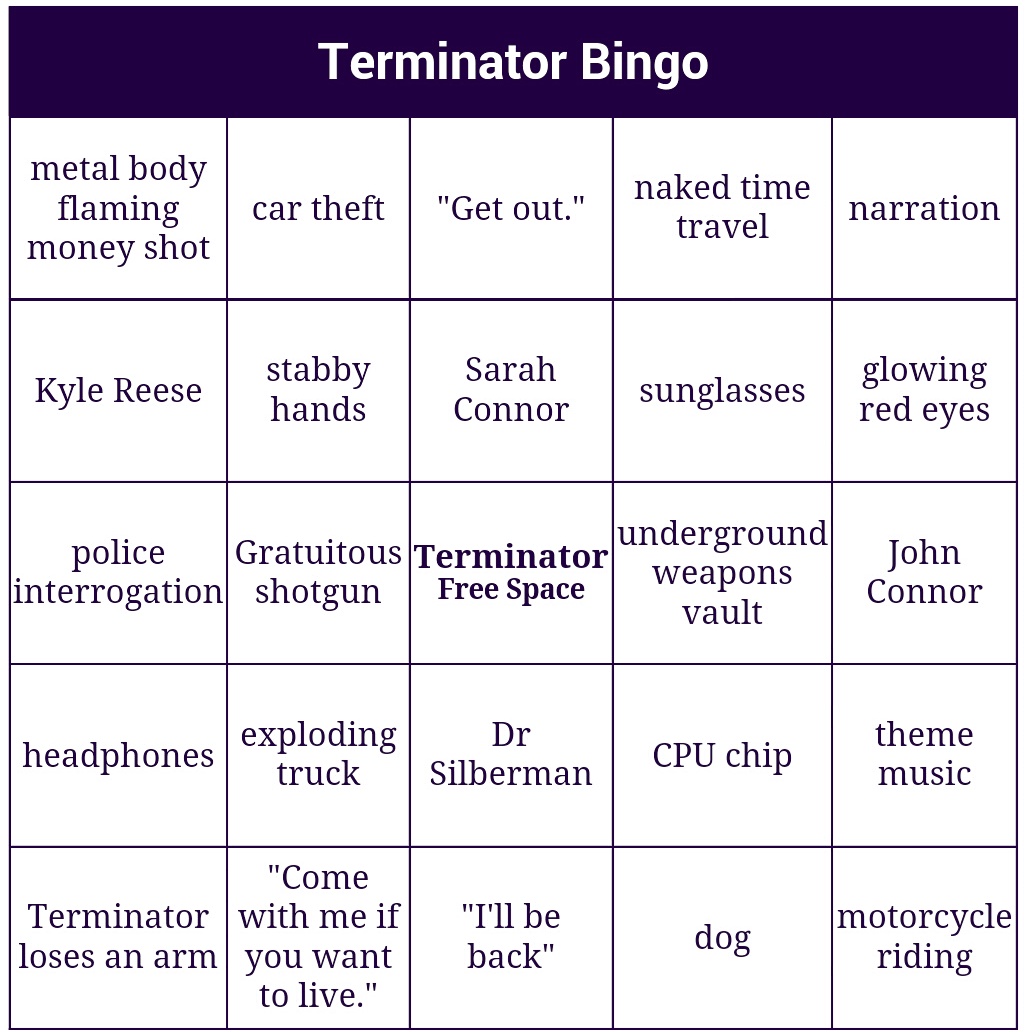 In case you, like me, enjoy finding all of the connections or homages to the original films, I created a printable set of Terminator Bingo cards for you! There are ten of them, and they work for any Terminator movie (and not all of the squares are in every movie, to keep it a little unpredictable). Hopefully I won’t be the only one calling Bingo (very quietly, to my movie-going companion) in the theater! We’ve also got a fun Terminator menu from our Judgement Day watch along if you feel like some deadly-good snacks.

Have you seen Terminator Genisys yet? Let me know what you think of it in comments, and whether you think this is a suitable ending to the original story or if they’re just trying to reboot (or some combination thereof)!