Are you ready for a throwback?

Stargate (1994) is a movie that spawned several television shows and subsequent movies following the events of said shows, and maintains a cult following that may spell a reboot in the not-so-distant future. But what about the source material? How does it hold up twenty years after its release? Let’s take a look.

The movie opens with a date listed as “8000 BC” in what appears to be a desert nomadic community. The people awaken to a huge something with a bright light descending from the heavens, and while most flee in terror, one young man approaches the light. Fast forward to “1928, Giza” and we have an archaeology site that looks straight out of an Indiana Jones flick. The patron and his daughter are visiting the strange find just pulled from the sand: a giant metallic ring, complete with cover stone. We jump forward once more to “Present Day” and finally reach the main plot and our primary protagonist. Enter Dr. Daniel Jackson (James Spader), a linguist and expert on ancient Egypt who is laughed out of his own lecture for suggesting that the pyramids weren’t built when most people say they are. He is offered a job with the government, represented by an old lady (who is, of course, the archaeologist’s daughter), and off he goes to a military base inside of a mountain in Colorado.

Soon Daniel discovers that his purpose on the base is to finish the translation on the giant ring found in Egypt in 1928. He informs them that according to the inscription, this is called a “Stargate” and that it has coordinates that correspond to constellations like Orion. With this information, the military activates the stargate which connects to a location “at the other side of the known universe” and soon Daniel is part of a team heading through the gate on a reconnaissance mission; his job is to translate the opposite gate to bring everyone home. 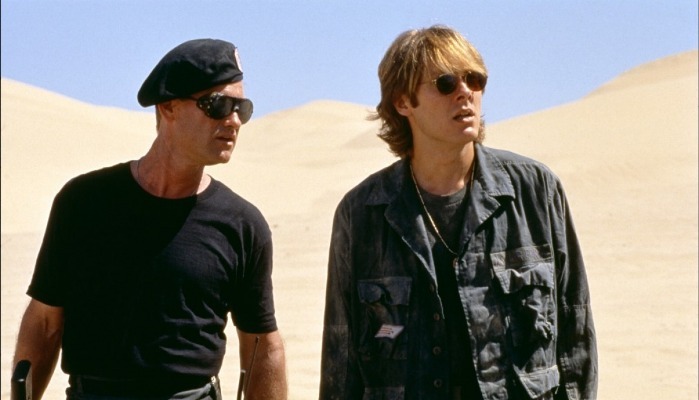 The team is led by one Colonel Jack O’Neil (Kurt Russell), grieving his dead son and harboring a death wish. They encounter strangely-human (and very similar to ancient Egyptian) people on the planet who are forbidden to read or write and who worship the god Ra. The people harbor the soldiers and Daniel, who are trying their best to find a way home after finding no instructions attached to the stargate on this planet. Daniel even accidentally gets married, which seems to happen pretty often in these movie scenarios.

Soon Ra himself appears and begins attacking the people. Daniel discovers that Ra came to earth thousands of years ago and essentially possessed a human (remember the young man from the opening scene?), then started this other colony of humans to work for him. The Earth stargate was buried after an uprising and he has arrived to stop another such event.

At this point the movie devolves into a typical action movie with the Brave Soldiers and Kid Heroes leading a rebellion against Ra. I won’t spoil the ending in case you haven’t seen it, but I’m sure you can tell how this is going.

So how does it hold up?

Overall it’s a decent action movie. I’d definitely call it more of an action flick than a science fiction piece, despite the space travel and aliens. All but one character are human, after all, and the emphasis is much more militaristic than about the wonder of going to another planet. No one on the reconnaissance team seems very impressed (or even afraid) to be on another planet across the universe.

I also found myself asking all sorts of questions about things to do with the plot. For instance, how did Ra know to come just then? How did they activate the gate on the other planet without a computer? The Air Force needed a giant setup to work the gate back on Earth, after all. How do the symbols still work if the visible stars aren’t the same across the universe? And how had a language changed so little over 8,000 years that Daniel is able to pick it up in about an hour, having never heard anyone speak it previously? It’s also hard not to see the pretty dated stereotypes present (about both modern and ancient Egyptian culture), though given when the movie was made, that wasn’t too unusual. 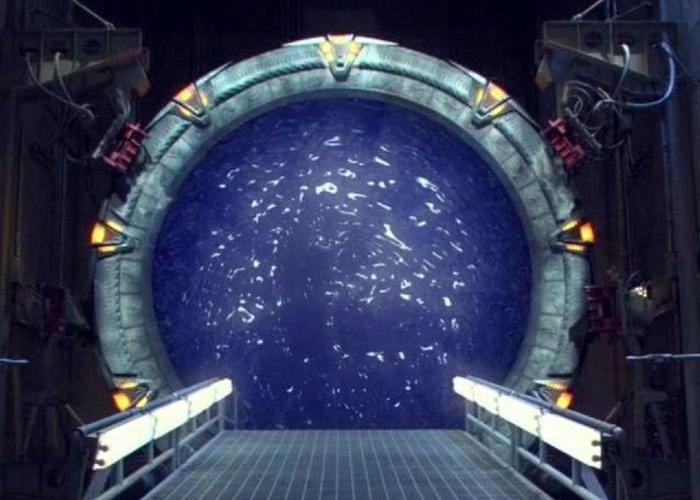 The special effects are minimal (the gate itself is the biggest one, with its water-like portal), which helps the movie avoid looking too dated. Military uniforms help this as well, though Col. O’Neil’s hair did make me laugh a bit. Otherwise the only thing that didn’t quite fit was the animatronic or puppeted Bantha-camel creature that they ride; these days it would be CGI and much less static. Generally, though, it looks like it could be a made-for-TV movie from the last five years.

So is the movie worth it? I think it is. It’s a staple of science-fiction canon and a fun action movie if you can suspend your disbelief and not ask too many questions about plot-holes. In fact, the whole thing reminds me of an Indiana Jones movie, with the action punches and the sweeping generalizations of cultures and the professorial romance, and none of this is a bad thing. I thoroughly enjoy Indiana Jones and enjoyed Stargate in much the same vein. It’s sort of what Crystal Skull might have been if made directly after Last Crusade.

If they do make a reboot, you won’t hear a complaint from me: I’ll be there opening night.