Movie Review: Guardians of the Galaxy

Movie Review: Guardians of the Galaxy

Guardians of the Galaxy opened this weekend as possibly one of the biggest risks Marvel has taken yet on a property, propelled by a huge marketing campaign and the confidence of a studio that already set a release date for the sequel before the first movie officially premiered. And I can tell you that it is a highly enjoyable movie, pushing itself beyond the realm of comic book action to the land of comedy, mostly to its gain. It will probably be the most popular movie of the summer, and ties itself nicely to the already massively successful Avengers franchise, so I think it’s safe to say the Guardians are here to stay. 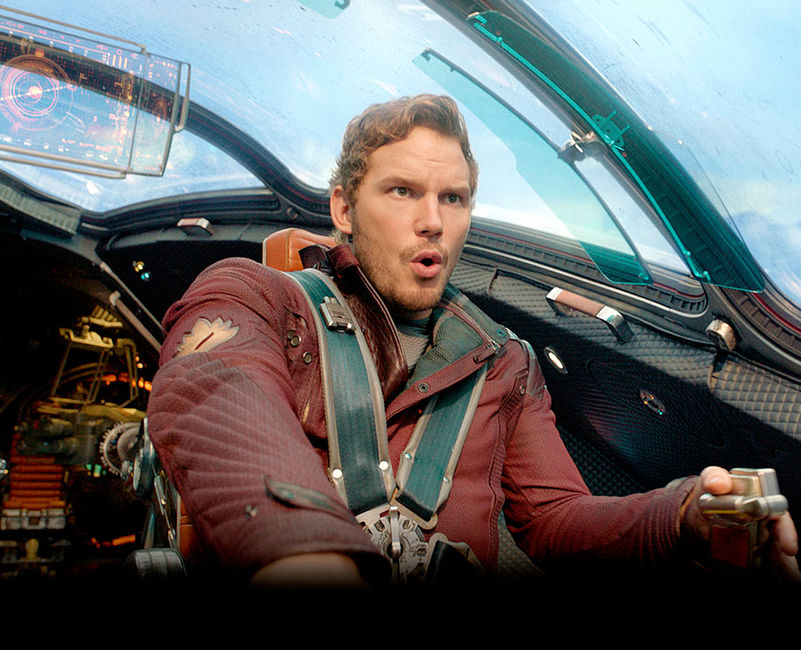 The movie opens in 1988 with a kid who’s mother is not long for this world. You might think this would lead to a lot of schmaltz, but we aren’t given long to dwell before being hauled 26 years into the future along with Peter Quill (Chris Pratt). Quill calls himself Star Lord and is a thief, but has maintained his 80’s Earth attitude (and Walkman). For me, the 80s (and later, for some reason– some of it seemed a little anachronistic and too modern) slang was a little overdone and distracting, but I also appreciated knowing that an 80s kid was experiencing other worlds through the pseudo-futuristic lens of that time period. It almost called back to a lot of the movies from that era that walked the line between sentiment and corny humor, never spending too long on either.

At any rate, one thing leads to another (mostly involving Quill being wanted by the cops and the bounty hunters) and a whole group of people are arrested and sent to prison together. This includes Gamora (Zoe Saldana), Groot (voiced by Vin Diesel) and Rocket (voiced by Bradley Cooper). They begrudgingly find themselves planning an escape together, along with Drax the Destroyer (Dave Bautista), to sell an item that Quill stole: a metal orb of surprising value. They also want to keep it from a baddie named Ronan (Lee Pace). The plot, such as it is, proceeds from there. 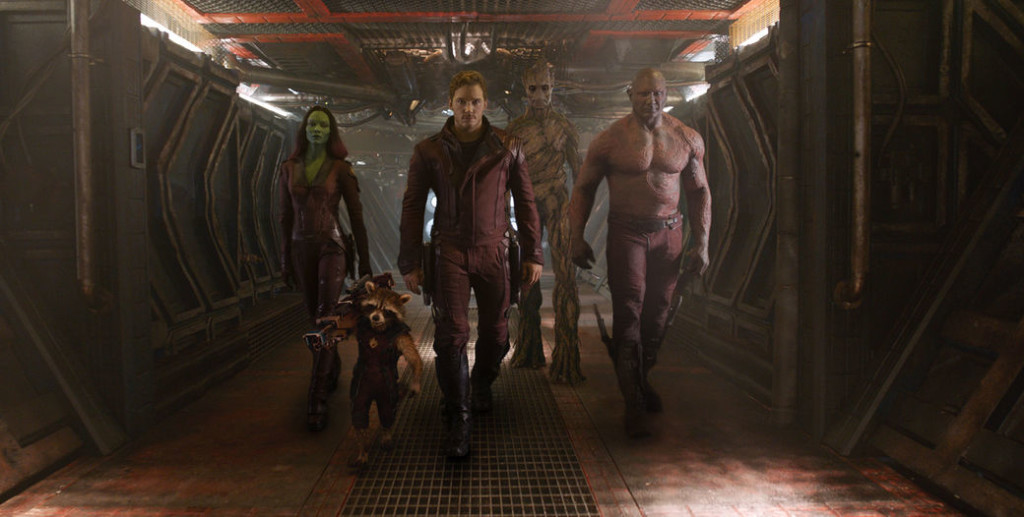 This movie is entertaining and fast-paced. It didn’t feel like a two hour movie in the least, and I was surprised when we reached the end so quickly. (This is a wonderful relief after the never-ending-story Transformers 4…) The visuals were fantastic and even had some moments of unexpected beauty, as when Groot suddenly releases what look like tiny fireflies to light our heroes’ path. It did lacked a significant plot, instead doing what so many origin stories do by simply setting the characters into motion and introducing things that will likely play a larger role in later films. We know the cast now and we know a bit about each of their personalities, and they have been fitted into the overall Marvel Cinematic Universe as such thanks to this film’s MacGuffin: the contents of the orb.

If you haven’t noticed yet, this review contains spoilers. Proceed accordingly. Inside the orb is an infinity gem, which connects this seemingly unrelated tale to a bigger picture being painted by the Avengers movies, particularly with Thor and the Asgardians, and explains how this particular universe fits together as it were. It will be interesting to see how the infinity gems feature in future stories. It was also interesting to see Thanos featured, not as a primary villain but as a super-villain (a la the Emperor to Ronan’s Darth Vader). We’ve gotten hints of this wider world in the past, but this is the first time that a movie takes place almost exclusively in what we consider outer space.

With this movie, Marvel has proven that any property is fair game for a good movie, and with Disney’s budget behind them, not much isn’t in the realm of possibility (beyond, of course, licenses they don’t currently hold, but we’re not going to open that can of worms here). They have taken a relatively little-known set of characters and given them to the wide public as the next big thing and it definitely works. This film is definitely a good fit for its target audience, and enough different from the other movies out this summer that it will shine by comparison. And honestly, it’s well-written enough that despite the corn-ball humor by the end the characters are acting with motivation we can understand, and we care about what happens to them.

One of the most fun aspects of this film is the sheer number of great references, many of which you need to know to really catch, but some of which are right there in front of you. I particularly enjoyed Cosmo the Space Dog and the John Stamos reference, but possibly the best one of all comes at the very end, after all of the credits. Stick around for it, and you’ll be glad. Overall, if you’re looking for a fun movie night, I recommend this one.