Wizards Unite— the Niantic game that brings the AR, real-life experience of the wildly successful Pokémon Go together with the Wizarding World is here! Well, in a few places anyway. The game is rolling out starting this week and while it’s definitely on track to be popular, it is a little bit harder than its pocket monster predecessor. With that in mind, here’s a quick start guide so you can jump in and play as soon as it’s available!

The first thing to know is that there’s a story to this game, and that it takes place in the “present”. Harry and Hermione are working for the Ministry of Magic and YOU have been recruited to help track down magical items, animals, and people that might alert muggles to the existence of magic!

Because there’s a lot of plot, it can feel like a lot of reading to begin. The text can all be clicked through by touching the screen, but be warned that you might accidentally click through instructions as well.

Now for some basic game play. This game is built on Niantic’s mapping platform, so it’s got all the same locations tagged as Pokémon Go. Instead of “stops” and “gyms” though, we’ve got Greenhouses, Inns, and Fortresses.

Encounters with your targets, the magical objects/creatures/people, are highlighted by glowing shields on the map. Clicking one of these will bring up the encounter.

To cast a spell, trace the pattern on the screen. The better you trace, and the more quickly, the better the spell is. You can augment your spells with potions to make them more effective (similar to berries in Pokémon Go).

“Winning” the encounter gives you a “fragment” of the item/being you saved. Collecting enough fragments of these allows you to add images of the items/beings to your inventory. It’s like a fancy digital sticker book. Yay! 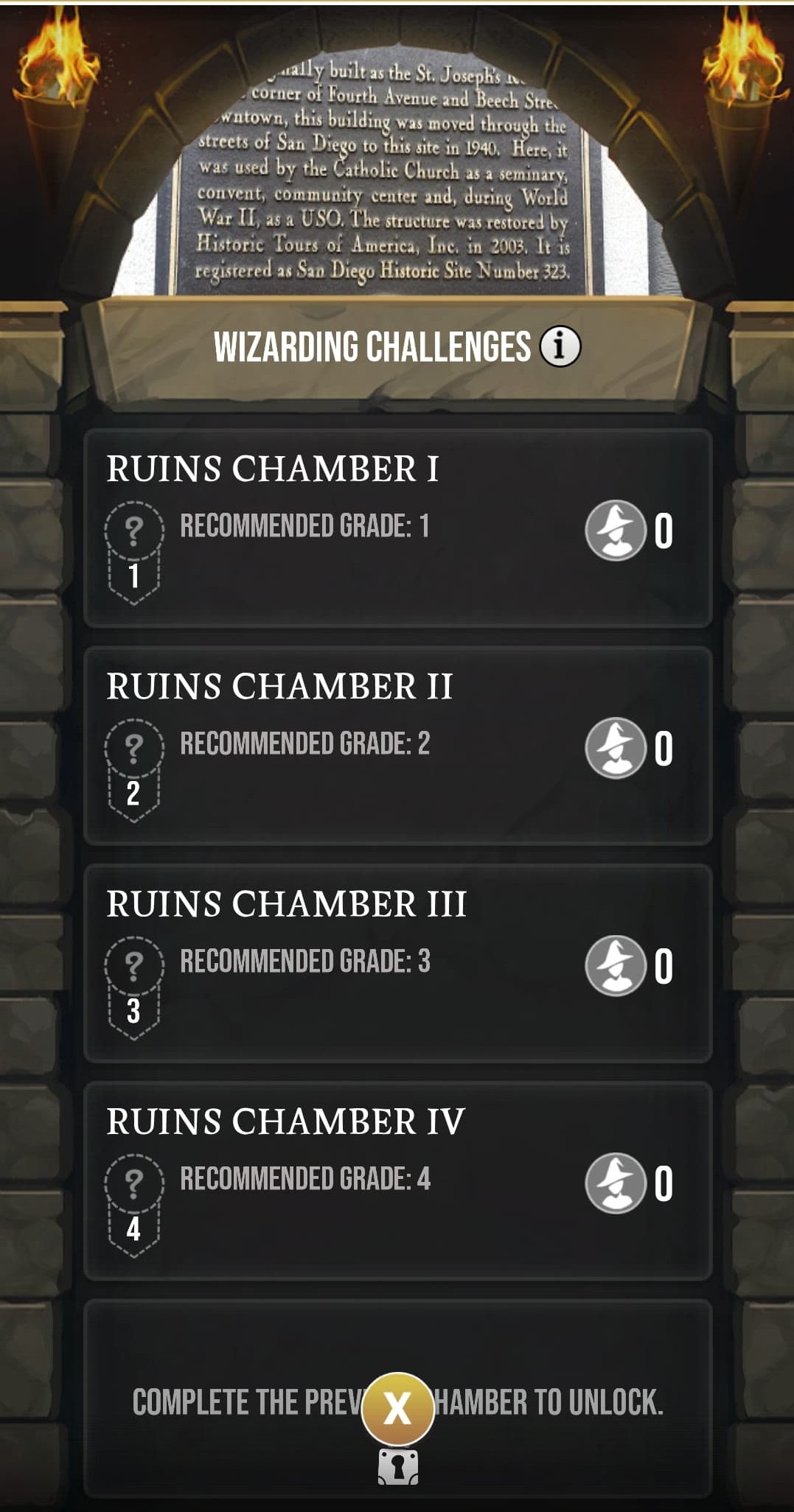 Fortresses are this game’s version of “gyms” where you can battle monsters and earn fragments, potions, and other items. Battling can be a little tricky at first, but with a bit of practice, it quickly gets easier. Each Fortress has several chambers that are increasing difficult. Using rune stones (items you collect) allows you to unlock the encounters and set the challenge level. 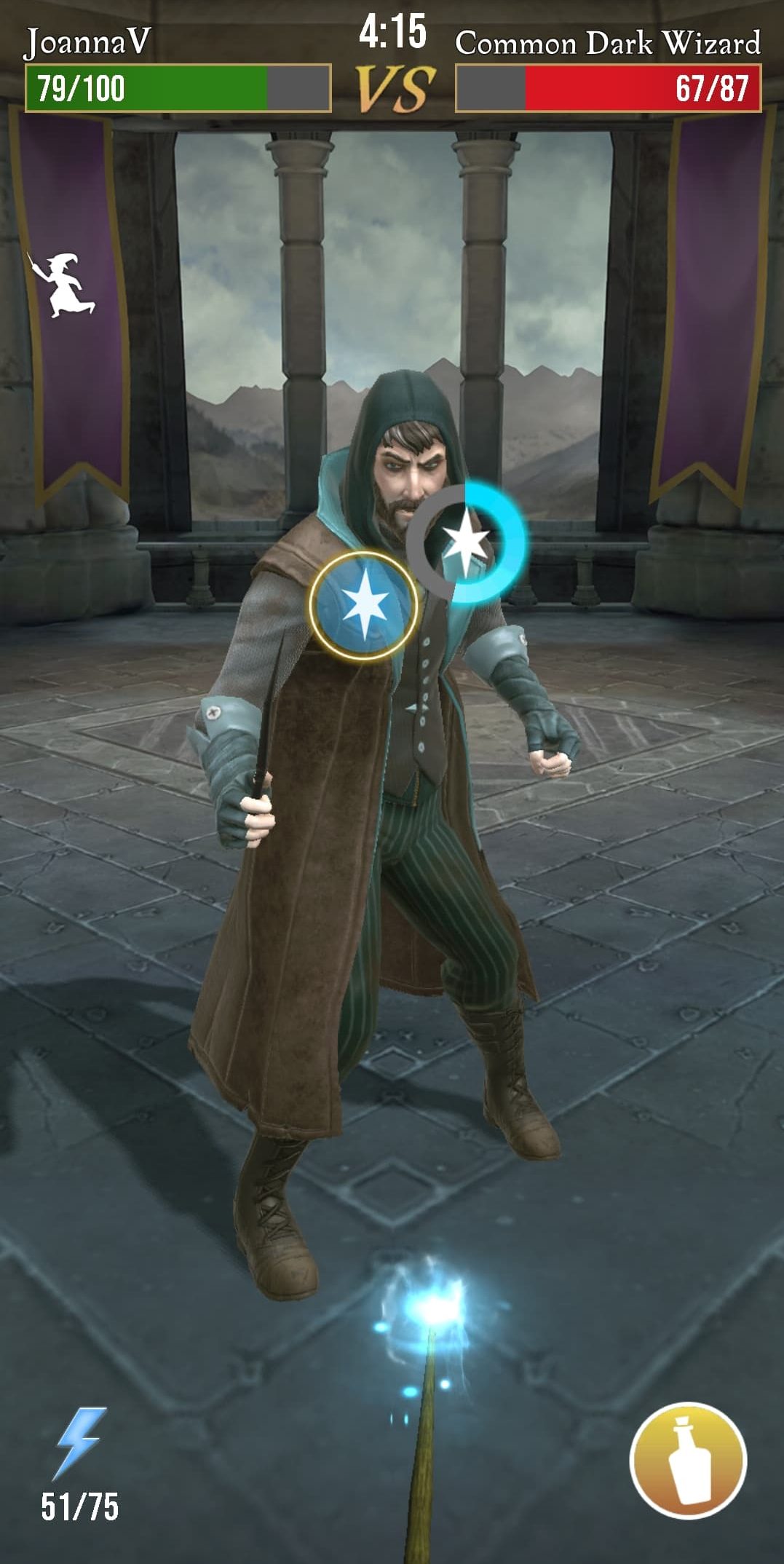 Each creature/being you encounter in a Fortress will have a little star target on them. Use your finger to drag a corresponding star target until it aligns with the point on the creature/being, and it will then allow you to cast a spell.

You must also defend yourself from attacks with swipes to cast a protective spell. The encounters are timed, and you have a limited amount of spell energy. (Don’t forget–visiting Inns gives you more!)

The map will also show you items to collect, including ingredients for potions and boxes called Portmanteaus containing portkeys.

Using a key (earned item) and walking certain distances with these Portmanteaus unlocked them so that you can activate the portkey inside.

Using the portkey takes you to a “special location” in the Wizarding World: inside Hagrid’s Hut or Newt’s office or the like. Collecting items there gives rewards.

At level six, you can choose a profession in the Wizarding World. There are three to choose from, and each has advantages to your actions: Auror, Magizoologist, and Professor. Scrolls and books you collect can be traded for skills in your chosen field.

Finally, there are daily and ongoing quests you can complete for Harry and other ministry officials. These also offer rewards in the form of coins, items, and so forth. So there you go, a quick start guide to the game! Have you been able to play yet? What do you think so far?