Are you a huge fan of Halloween but not such a huge fan of scary movies? I know I can’t watch certain movies without losing sleep for several nights and jumping sky-high at the slightest bump in the night.  But I still love to get into the Halloween spirit with lots of on-screen entertainment.  As such, let me share with you some of my favorites films that I always watch during this spooktacular time.

Not Exactly Related to Halloween

The following flix don’t have a specific Halloween theme, but they have spooky elements and generally a darker color palette (if it’s not a black and white film that is).

This is still, by far, the best movie based on a board game.  What makes it great for Halloween? You’ve got the rainy night, creepy house, mysterious guests, and then murder! It’s also full of comedic gems. Both the physical comedy and the dialogue are hilarious.  And it’s got alternate endings to keep you guessing. I always choose the option to play one ending at random.  Have you seen all three endings? Which one is your favorite?

Wadsworth: Professor Plum, you were once a professor of psychiatry specializing in helping paranoid and homicidal lunatics suffering from delusions of grandeur.

Professor Plum: Yes, but now I work for the United Nations.

Wadsworth: So your work has not changed.

Tim Curry as an alien transvestite. Do I need to say more? Yes? Well, add the Time Warp then. This is one of the strangest movies I’ve ever seen and that is also why it’s a cult classic.  And it’s full of great costume inspiration too. Columbia! Magenta! And of course Dr. Frank-N-Furter! The Rocky Horror Picture Show is a comedy, a horror, and a musical all rolled into one. It has gained such a cult following over the years it is actually the longest running theatrical release in film history due to it still being shown in limited release at various theaters, most frequently for midnight showings.  And it was selected for preservation in the United States National Film Registry by the Library of Congress in 2005.

This is a classic movie, a dark comedy directed by Frank Capra.  How can you not love a kooky, old black and white flick starring Cary Grant? There’s pumpkins (look for them), a man who “looks like [Boris] Karloff”, and murder. After first watching this movie, I started yelling “Charge” every time I ran upstairs.  Watch it and you’ll want to do the same.

Believe it or not, there are actually a lot of monster related movies that are funny instead of scary.  Check out these.

This is a classic! From 1987, Monster Squad is homage to all the classic Universal monsters (Fred Dekkar (writer/director) was actually inspired by Abbott and Costello Meet Frankenstein). And it’s done in a way that includes kids working to save the world and even a musical montage as they prepare.  This movie taught me that a silver bullet is the ONLY way to kill a werewolf.   I watch it every year, at least twice when the Halloween season is upon us. It’s so quotable, but certainly best known for that little statement about Wolfman.

But there are so many other great quotable lines: “Mummy came in my house…” “See ya later, Band-Aid breathe.” “I’m in the god damn club aren’t I?” Over the years, the film has gotten some flak for its politically incorrect language. But the film reflects the time period and the age and attitudes of its protagonists with the language.  It’s got heart-warming (Phoebe and Frankenstein’s monster) and heart-breaking (the numbers tattooed on the arm of ‘Scary German Guy’ marking him as a Holocaust survivor) moments. 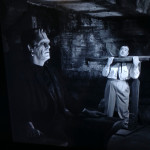 Abbott and Costello met many monsters, but their encounter with Frankenstein is perhaps one of the most beloved.  In fact, the Library of Congress even declared it “culturally, historically, or aesthetically significant” and selected it for preservation in the National Film Registry.  The hilarious antics of Bud and Lou mixed up with classic monsters is comedy gold and never gets old.

Wilbur Grey: You know that person you said there’s no such person? I think he’s in there… in person. I was reading this sign over here, Dracula’s Legend. All of a sudden I heard…

Wilbur Grey: It should get oiled.

Tim Burton’s The Nightmare Before Christmas

This is one of my all-time favorites and it’s even better because it fits as a holiday movie from the start of the Halloween season through the end of the Christmas season. I find myself singing “This is Halloween” all the time. Or humming the tune that Lock, Shock, and Barrel sing as they go to kidnap Sandy Claws.  There’s so much good stuff in this movie, including inspiration for all kinds of costumes and projects. I’ve always wanted to wrap my Christmas presents in the style presented here (and in the Haunted Holiday Mansion at Disneyland).  If you’ve never seen this, run to get a copy and watch it. Or at least check out the original story idea as narrated by Christopher Lee.

“Once in a purple moon…” a movie comes along that is so silly it can’t help but become one of your favorites.  This is probably as cheesy as they come. But with a young Fairuza Balk (“Return to Oz”, “The Craft”) as a bumbling young witch, the incredible Diana Rigg as her hard-nosed teacher, and the versatile Tim Curry as The Grand Wizard….it’s a must-see.  It helps remind us that “growing up isn’t easy” and that Halloween is “the most wonderful” thing ever!  Watch Tim Curry’s musical number yourself and see what I mean!

Halloweentown (and its sequels)

Halloweentown is a cute little Disney movie with Debbie Reynolds.  Debbie Reynolds is Aggie Cromwell, a witch from a long line of witches who lives in a town (can you guess the name?) with monsters and magic and where Halloween is not just a one day holiday. Aggie has a daughter who left Halloweentown to get married and raise her children in a ‘normal’ environment. Of course, when the kids aren’t allowed to celebrate Halloween and start to realize they have some powers…the witch heritgae comes to light and just in time to save Halloweentown.  The movie was successful enough to spawn three sequels (of which two had the same cast).  I’m actually a big fan of the third movie in the series, Halloweentown High.  These movies are classic Disney Channel fare and good fun for all ages.

Disney’s The Legend of Sleepy Hollow

Bing Crosby narrates (and voices Ichabod Crane) in this animated short from Disney.  It was released originally in 1949 in combination with The Wind in the Willows.  The combination, titled “The Adventures of Ichabod and Mr. Toad” was actually recently released on Blu-Ray.  It’s worth adding it to your collection.  After the success of Tom Mison in the role of Ichabod Crane in Fox’s “Sleepy Hollow” you owe it to yourself to see another version of Ichabod.  (PS you should also go and read the original tale by Washington Irving!)

If you are a child of the 80’s you most certainly remember Disney’s weekly programming and more specifically the Halloween special ‘Disney’s Halloween Treat’ (1982) which was narrated by a talking jack-o’-lantern (or later a similar but slightly different compilation called ‘A Disney Halloween’ (1983) which was narrated by the Magic Mirror) and featured segments themed around villains, Halloween, and other spooky thrills from several Disney movies and cartoons. As a kid this was my first introduction to Fantasia and the fantastically creepy Night on Bald Mountain and the wonderfully kooky the 1929 Silly Symphonies short, The Skeleton Dance.  Sadly, I wore out the VHS tape many years ago (not that I even own I way to play a VHS tape anymore) and this amazing special has never been released on DVD.  You can bet if and when it is, I will pre-ordered that sucker as soon as possible because it was (and most certainly still would be) a must-watch Halloween treat.

No non-scary Halloween movie would be complete without Hocus Pocus.  If you haven’t seen the Sanderson sisters “Sucking the lives out of children” you are missing out! Pretty sure anyone who’s ever seen Bette Midler, Sarah Jessica Parker, and Kathy Najimy as the infamous Sanderson sisters can’t help but include this movie on their Halloween watch list.  The costuming is amazing. The dialogue is amazing. And of course, it includes a wonderful number by Bette.  How can you go wrong?

How many of these have you seen? What’s on your non-scary Halloween watch list? Happy Halloween everyone!

Unlock the achievement with the code orangeblood