Book Review – The Imposters of Aventil by Marshall Ryan Maresca

Book Review – The Imposters of Aventil by Marshall Ryan Maresca

Disclaimer: I received this book from the publisher, DAW Fantasy, in exchange for an honest review.

How do you feel about students learning magic? How about vigilante justice? If you’re a fan of both, you may want to introduce yourself to Veranix Calbert. Veranix is a student studying magic at the University of Maradaine. But he’s also a vigilante known as The Thorn. The Imposters of Aventil (DAW Mass Market Paperback; October 3, 2017) is the third book in the Maradaine series (preceded by The Thorn of Dentonhill, An Alchemy of Chaos) and it sees Veranix trying to maintain his vision of The Thorn in the face of imposters.

If that or the book’s synopsis leaves you with a “Huh?” feeling, you should definitely go read the first book in the series, at a minimum.  Veranix and the Maradaine series has been referred to as a cross between Batman and Harry Potter. I asked author Marshall Ryan Maresca which of the two Veranix would gravitate more towards.

Oh, that’s a tough call, but probably closer to Harry.  Veranix, Batman and Harry all have that dark origin of losing their parents, but for Veranix— like Harry— it was crucial to maintain and embrace lightness and joy.  Veranix has his vigilante mission, but he still wants to be a student and have a “normal” life.

The Imposters of Aventil starts off with Veranix trying to enjoy a somewhat “normal” life while reveling with the crowds in town for tournament that seems like the equivalent of the Olympics. The tournament sees many different colleges competing in different events, including gymnastics, running, and a game called “Tetchball.” Tetchball ends up playing an important roll in the the book. Luckily, there’s an appendix with a full description of the game and a diagram.  I asked Maresca how he came up with the concept of the game.

Honestly, the main inspiration was “what would happen if I combined cricket and rugby into a single game?”   I wanted a “hit the ball with the bat and run” game, but I also wanted it rough and full-contact.  Also, back in Thorn, I mention the idea of “hitting a triple-jack” as a good thing, so I needed a sport where I could pay off that idea.

Between the tournament and Veranix’s extracurricular activities, The Imposters of Aventil dives right in to the adventure building from and following after the events of the first two books. It also kicks off a crossover event brining in characters from the Maradaine Constabulary series (Santrine and Minox). I read book one of the Maradaine series and book one of the Maradaine Constabulary series (more on that later) before I read this one. And I’m glad I did because as the third book in one of several different series, The Imposters of Aventil doesn’t stand alone. I did not get a chance to read book two of either series (An Alchemy of Chaos or An Import of Intrigue) before diving in  and I’ll admit I felt a little lost at times. But on the whole, you can understand and enjoy The Imposters of Aventil without having detailed knowledge of the immediate prior books (the events are referenced in a way that you get the important parts). But I think you’d enjoy the series more with prior knowledge of The Thorn, his allies, and his purpose.

That said, I thoroughly enjoyed The Imposters of Aventil, but a lot of that has to do with Santrine and Minox. Santrine and Minox are constables from a different region.  They are from the Grand Inspectors Unit and brought in to investigate after one of Aventil’s constables is killed by “The Thorn.” They are also the main characters in another series from Marshall Ryan Maresca, the Maradaine Constabulary series. I wanted so much more from Santrine and Minox, but that is because I fell in love with those two characters while reading A Murder of Mages. I realize I may be confusing you with all this talk of other characters and other books, but you really don’t have to have read the Maradaine Constabulary series to understand The Impsoters of Aventil (but it’s really great so you should).

Overall, The Imposters of Aventil is another great entry to the series that continues to build the world and the characters surrounding Veranix. At this point, I’m more fascinated with many of the supporting characters (Kaiana, Colin, and Delmin to be specific) than Veranix. Creating such a wide variety of well-realized characters is definitely a gift of Maresca’s. The other gift is taking heavy topics, like street gangs, drug trades, racism, and other prejudices, and making them of import without making them too dark. This is a fun series despite the tough topics. It’s not earth-shattering, but it provides an escape that is all too welcome these days.

If you’re looking for a light fantasy read, I recommend Maresca’s various books in the world of Maradaine, just don’t start with The Imposters of Aventil. 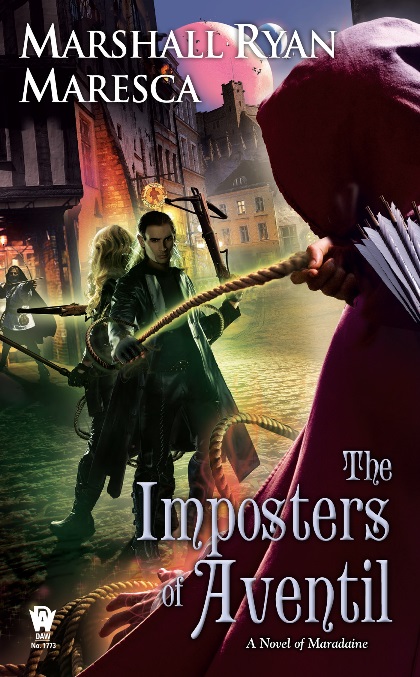 About The Imposters of Aventil

Summer and the Grand Tournament of High Colleges have come to the University of Maradaine.  If the heat and the crowds weren’t enough to bring the campus and the neighborhood of Aventil to a boiling point, rumors that The Thorn is on the warpath—killing the last of the Red Rabbits—is enough to tip all of Maradaine into the fire.

Except Veranix Calbert, magic student at the University, is The Thorn, and he’s not the one viciously hunting the Red Rabbits.  Veranix has his hands full with his share of responsibilities for the Tournament, and as The Thorn he’s been trying to find the source of the mind-destroying effitte being sold on campus. He’s as confused as anyone about the rumors.

When The Thorn imposter publicly attacks the local Aventil constables, the Constabulary bring in their own special investigators: Inspectors Minox Welling and Satrine Rainey from the Maradaine Grand Inspectors Unit. Can Veranix find out who the imposter is and stop him before Welling and Rainey arrest him for the imposter’s crimes?

Marshall Ryan Maresca grew up in upstate New York and studied film and video production at Penn State.  He now lives Austin with his wife and son.  His work appeared in Norton Anthology of Hint Fiction and Rick Klaw’s anthology Rayguns Over Texas. He also has had several short plays produced and has worked as a stage actor, a theatrical director and an amateur chef. His novels The Thorn of Dentonhill and A Murder of Mages each begin their own fantasy series, both set in the port city of Maradaine.

His top five geek loves, in his own words, are: 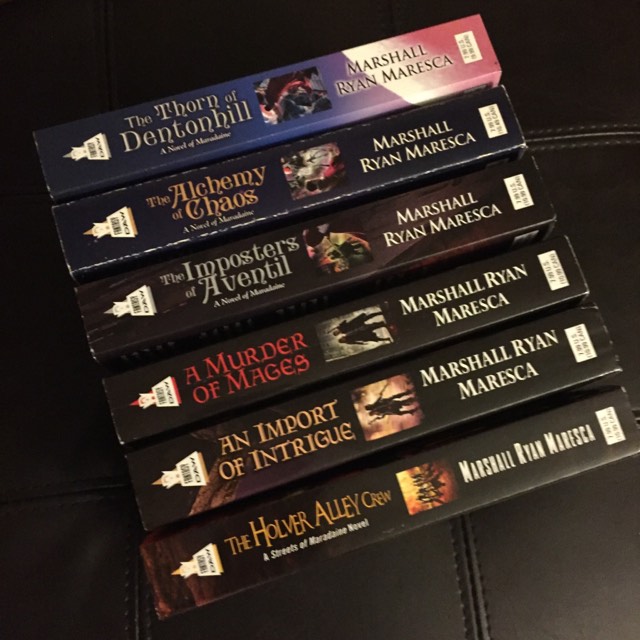