If you’re a fan of paranormal fantasies and fairy intrigues along the lines of Seanan McGuire’s October Daye series, you should read Alex Craft‘s tale. Kalayna Price has written a lovely series about a woman who can see the land of the dead, talk to Death, raise shades of the deceased, and more. There are fairies, love triangles, and more. The sixth book in the series, Grave Destiny, is available April 2. Find out more about the story, without spoilers (for the sixth book anyway).

Grave Destiny is another wonderful entry into the world of Nekros, fairies, grave witches, and planeweaving. Alex Craft is a grave witch, but she’s also so much more: she’s actually a fae with a rare talent to planeweave. Grave Destiny sees her accepting her heritage and talents and searching for answers. And because it’s Alex, she also ends up stumbling into court intrigues, this time involving her “betrothed” from the Court of Shadows.

Grave Destiny is brilliant as it finally begins to unravel some of the greater mysteries and larger issues surrounding the faerie realm. We are introduced to rulers from the Summer Court and the Court of Light, setting up future struggles. Grave Destiny also continues to show the struggles for Alex’s heart. Falin, Death, and now Dugan? Who will hold her heart? Who’s behind the current plot?

I thoroughly enjoyed this entry into the series. It was satisfying on its own and also makes me that much more eager for the continued story. Grave Destiny sets up future plots quite nicely and I can’t wait to see them play out. From changes in Faerie, both large and small, and continued intrigues between and amongst the various courts. Another visit to Summer will be very interesting.

If aren’t reading this series, give it a chance. While it does seem reminiscent at times of other paranormal series, it has enough differences to stand on its own. And if you are a fan of October Daye, you’ll be a fan of Alex Craft.

Grave Destiny by Kalayna Price is available from Ace on April 2. Pre-order now. 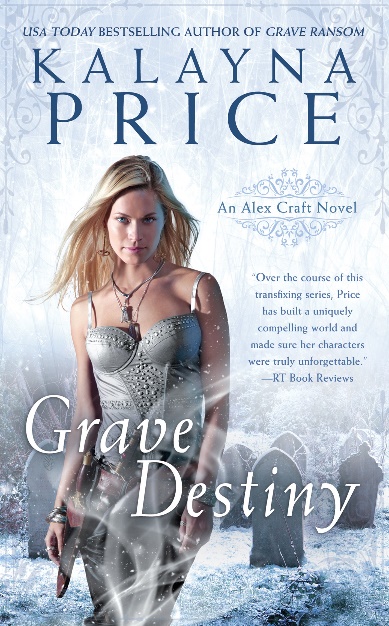 Grave witch Alex Craft can speak to the dead, and that makes her a dangerous enemy for anyone with something to hide. . . .

Alex is still trying to come to terms with her changing powers and her growing ties to Faerie when a case she’d rather avoid falls right into her lap. A fae prince desperately needs Alex to investigate a politically sensitive murder. She reluctantly agrees to the case, taking FIB agent Falin Andrews along as her backup.

But as Alex begins to delve into the mystery, she realizes that the intricate web of alliances and intrigue in the Faerie courts is strained to its limits. War is about to break out, one that threatens to spill over into the mortal realm. This murder is tied right to the center of centuries-old arcane unrest, and if Alex isn’t careful she may follow the twisting path ahead of her right into her grave end.

Kalayna Price is the USA Today bestselling author of the Alex Craft novels including Grave Ransom, Grave Visions, Grave Memory, Grave Dance, and Grave Witch. Ms. Price draws her ideas from the world around her, her studies into ancient mythologies, and her obsession with classic folklore. To find out more, please visit her at www.kalayna.com and connect with her on Twitter @Kalayna.