Disclaimer: I received this book from the author in exchange for an honest review.

Are you a fan of portal fantasy? How about a main character filled with awe and innocence? Or a dashing older man with secrets? If any of that catches your interest, you’ll want to check out Roam by Dez Schwartz. Roam is an innovative fantasy novel with a sweet romance and a premise that leaves worlds open to discovery. There are witches, vampires, ghosts, and more.

The main character, Ethan Roam, is young (at first it isn’t quite clear how young he is) and naive. But that naivety helps perpetuate his innocent and trusting nature. Ethan is good and the book makes sure you know that.

You try to be better than the thing that’s knocked you down.

Despite having constant nightmares with a frightening wolf and never getting a decent night’s sleep, Ethan remains positive and excited about life and its mysteries. At times, his innocence seems to make him more trusting than I think he should or would be – but perhaps that’s just my cynical nature projecting.

Ethan’s dreams lead his pseudo-Uncle to suggest a potential solution. That solution is the deliciously older and secretive Dr. Grady Hunter. Grady has ulterior motives and is also full of delicious innuendos, which Ethan gradually learns to respond with. The build between Ethan and Grady is somehow simultaneously too fast and a slow burn. The character development perfectly represents the nature of emotions, especially when those emotions might be manipulated for other means.

Roam is an enjoyable, quick read with an interesting concept. It’s available now from NineStar Press. 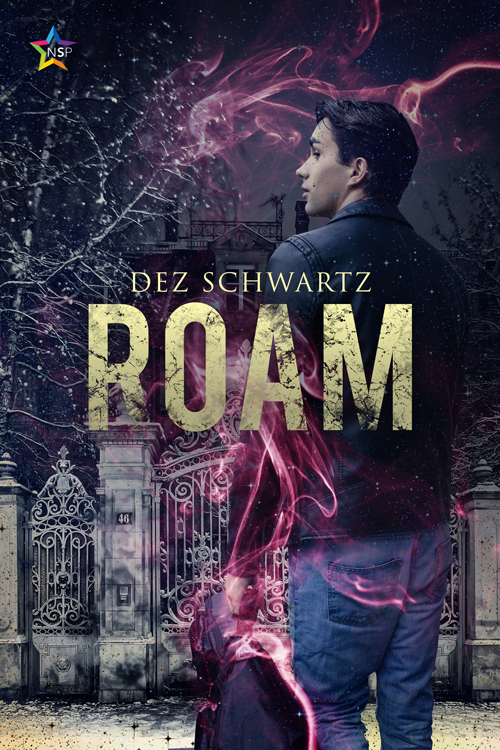 An Interview With the Author

The author of Roam, Dez Schwartz, has been a member of our Geek Girl Pen Pal community for several years participating in forums and on social media. Like many of us, Dez enjoys IGGPPCamp (because who doesn’t?). After reading Roam, I asked her few questions, including our favorite pen pal connecting question.

What are you top 5 geek loves?
My favorite geeky loves that I just can’t quit are Ghostbusters, BBC Sherlock, Penny Dreadful, Oscar Wilde, and Disney Parks.
With Ethan’s musical background, I wondered if you play any musical instruments?
Not as skillfully as Ethan does!  I don’t play anything currently (though I would love to learn violin).  For about a decade, though, I regularly played guitar and went through that “garage band” phase as a teenager.  I am not a good musician.  I accept this.  But my writing is greatly inspired by music.  I make playlists for every story.
What provided the inspiration for a dream traveler?
In all honesty, the “dream travel” aspect wasn’t my initial idea for Ethan.  Originally, he was just going to be a psychic character which is why he had vivid dreams.  But I felt a bit like that was overused in Urban Fantasy and I had this great world of paranormal creatures that I was building up through Grady Hunter’s character.  I realized that I wanted Ethan’s dreams to have a more “super power” quality and that’s when I chose dream travel.  Everything built itself out from there.  It’s a call I’m glad I made because it allowed me to play around in a genre that I never had before (Dreampunk) and to bring back the traditional Sandman legend but in a completely modern way.
What’s next for you?
I’m very excited to share that the sequel to ROAM has also been picked up by NineStar Press.  It’s written and should be releasing sometime in the middle of next year (2019).  I’m currently working on the third book in the series.  I plan for it to be a trilogy so it will also be the final book.  After that, I have a YA novella series, THE DEAD OAKS, that I’ll return to writing along with a couple of new projects that I’m already mapping out.

Ethan Roam suffers from night terrors and vivid daydreams, which lead him to the doorstep of the eccentric Dr. Grady Hunter, who thrusts him into a world of supernatural misfits. Ethan quickly learns that there’s more reality to his dreams than he suspected.

As Ethan unravels the truth behind his nightmares and falls into his first experience with love, he also finds himself the target of a sinister plan.

Ethan’s trust in his new companions will be tested and he’ll have to decide who he can rely on and who he must defy in order to survive a fatal Halloween night.

Dez Schwartz writes mostly LGBTQ Paranormal and Gothic Historical Fiction about dapper occultists, scheming supernaturals, and ghost hunters.  She currently resides in a haunted Edwardian era home in Texas and enjoys coffee, art, and Oscar Wilde. Learn more about Dez at www.dezschwartz.com and connect with her on twitter @dez_schwartz.