The Man in the High Castle meets Pacific Rim – if that doesn’t catch your attention I don’t know what will. That’s the underlying presence behind Mecha Samurai Empire by Peter Tieryas. This book is the story  of a young man in the United States of Japan (Japan and Germany won World War II). He isn’t a great student but he dreams of becoming piloting giant robot war machines.

Mecha Samurai Empire is an entertaining and action-packed novel about friendship and personal goals. But it also explores politics and war. At one point, I was even reminded of All Quiet On The Western Front. In this alternate history, though Japan and Germany were allies that relationship is at odds as they fight for control of the “Americas” causing troublesome interactions because of the friendship between our main character and a German woman. Race is also an issue that comes up, but sadly is not explore further in this book. However, this book does set up a series that will hopefully dive into that more.

Peter Tieryas sets up an intriguing new world based on the alternate history. The detailed attention given to this new timeline, even the “patriots” and terrorists groups in this world, grabs your attention and makes you think. And consider the adage about history being written by the winners. While all of this could make the book heavy and drag, it doesn’t.  It’s a swift and fun read. Hello giant fighting robots!

Mechan Samurai Empire is available from Ac Books on September 18. 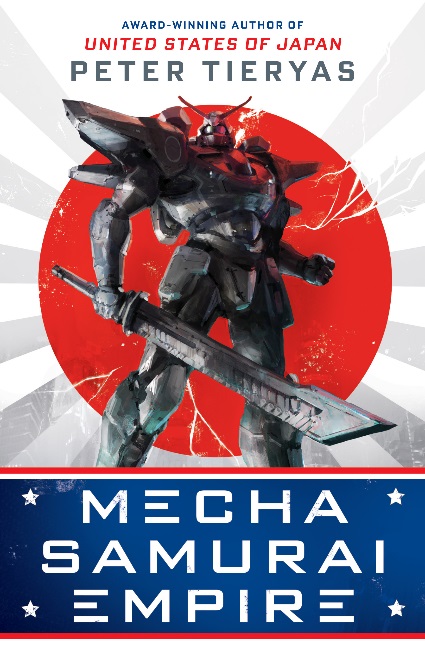 The Man in the High Castle meets Pacific Rim in this action-packed alternate history novel from the award-winning author of United States of Japan. Germany and Japan won WWII and control the U.S., and a young man has one dream: to become a mecha pilot.

Makoto Fujimoto grew up in California, but with a difference–his California is part of the United States of Japan. After Germany and Japan won WWII, the United States fell under their control. Growing up in this world, Mac plays portical games, haphazardly studies for the Imperial Exam, and dreams of becoming a mecha pilot. Only problem: Mac’s grades are terrible. His only hope is to pass the military exam and get into the prestigious mecha pilot training program at Berkeley Military Academy. When his friend Hideki’s plan to game the test goes horribly wrong, Mac washes out of the military exam too. Perhaps he can achieve his dream by becoming a civilian pilot. But with tensions rising between Imperial Japan and Nazi Germany and rumors of collaborators and traitors abounding, Mac will have to stay alive long enough first…

Here’s Peter chatting about the book prior to its release in Japan earlier this year:

Peter Tieryas is the author of Mecha Samurai Empire and United States of Japan, which won Japan’s top SF award, the Seiun. He’s written for Kotaku, S-F Magazine, Tor.com, and ZYZZYVA. He’s also been a technical writer for LucasArts, a VFX artist at Sony, and currently works in feature animation.

Connect with Peter on twitter @TieryasXu or on his blog The Whimsy of Creation: The Blog of Tieryas.