Last weekend at WonderCon I had the opportunity to chat with Catherine Elhoffer, the founder and designer behind Los Angeles-based clothing company Elhoffer Design. As their About page says, “Elhoffer Design is a Geek-Bound apparel company focused on helping lady-nerds feel amazing and powerful, with the occasional unisex piece for those not as interested in feminine cuts.” And that’s what I love about this company– the commitment to high quality, affordable designer pieces that flatter all kinds of body types, the celebration of lady/femme-nerds, and, I cannot emphasize this enough, the inclusion of functional POCKETS in the designs. I have several Elhoffer Design pieces myself and can attest to how great they really are. And now let’s get to know a little more about Catherine Elhoffer!

Hi! Thanks so much for chatting with us! First, we want to get to know you. How long have you been designing fashion? Was it a childhood passion or something you discovered as an adult?

I’ve been sketching dresses and costumes for my American Girl and Troll dolls since I was probably 7 or 8, and I would make simple tube dresses for them out of remnant fabrics I’d find from my grandmother’s sewing room or from Walmart. When I was a teenager I joined my local RenFaire and would make myself costumes, and now and then I’d try my hand at clothing. When I was in college I joined my university theater’s costume shop to really finesse my sewing skills, and that’s when I learned a ton about RTW clothing and spandex and just costumes and patterning in general. I actually hated fashion design, and still kind of feel that way. I love to look at it as costume designing, as costumes are my passion in life. Costume is just clothing worn with intent, and that’s what all Bounding and geek wear really is. We’re wearing it because we want to channel a character or vibe, and that means it’s a costume.

Available for pre-oder: The Unbeatable Cardi

What’s your favorite thing about owning your own business?

Not having a shitty boss. I had some really horrible bosses or producers in my film career and in my fashion career. It’s great to not have that anymore, as I’m my own boss. Though I can be quite harsh and critical on myself. But when I start to be too hard I try and take a break.

What’s the hardest thing about owning a business?

All the money required to do everything. I’m my own bookkeeper and day to day accountant, so all the stress of money and funds adds up fast, especially as I’m constantly running new things!

What fashion trend or direction are you most excited about right now?

I really love cropped fashion (not necessarily the 90’s crop that’s basically a bandeau, but the cropped at the waist styles) and have been designing for that aesthetic for a while now! I’m so happy that my customers have picked up on the flattering look of this style, as well!

We’re having a pizza party! What’s on your pizza?

Black Olives and cheese. If you’re getting my fav style of pizza, deep dish, I’ll also take mushrooms and spinach. I’m a monster.

At Geek Girl Pen Pals, we match geeky folks across the globe based on their top 5 geek loves. What are the top 5 things you geek out about?

Potter House sortings and the International Statute of Secrecy

Anything about Hyrule or the Hero of Time

Where can we find you on the web? Any upcoming conventions or other in person events?

I’ll be at Con of Thrones in Dallas at the end of May! I’m all over the web as ElhofferDesign (fun fact: Elhoffer is my last name. Some people think my first name is El and my last name is Hoffer, but nope. My company is named after my surname!). ElhofferDesign.com, Facebook/twitter/instagram/tumblr as Elhoffer Design. I’m not sure what social media platforms will exist in the future but I may or may not jump on them. 😉

Thanks again for taking time to talk with us! 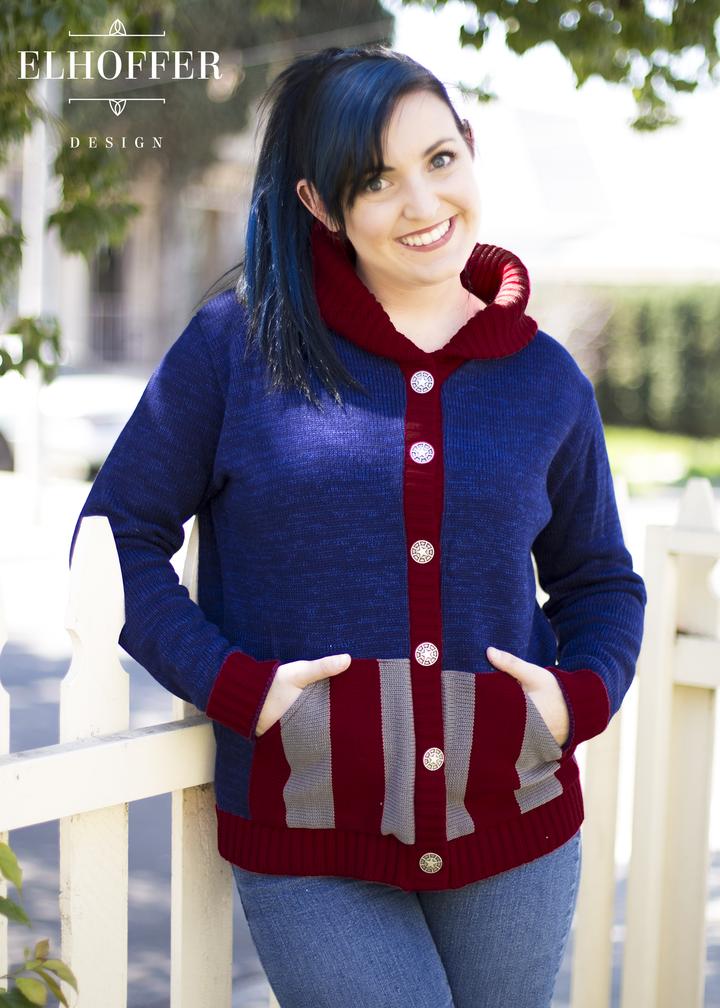 From Joanna: One of the things I love about Elhoffer Design is that, though the pieces can cost more than some other, larger geek fashion lines, Catherine is very transparent about where the cost comes from. She produces things in limited runs out of a local factory that supports female employees, and almost every piece is funded via pre-sale orders to ensure that there is enough interest for the item to go into production. This means that buying the piece in advance means some pretty great deals on designer-wear! If you are looking to support a small business, have high quality and flattering pieces (I can attest as a woman-with-curves that the sizing charts are good and that the clothes fit really well in larger sizes), and add a little designer oomph to your closet, jump on some of the pre-orders! I’ve linked some of my favorites in this article, including the American Hero Shawl Cardigan above. Everything from the buttons to the perfect color blocking make this piece perfectly inspired by one of my favorite Captains.

Do you have any Elhoffer Design pieces? Or do you have a favorite from the site?