Review – A Brightness Long Ago by Guy Gavriel Kay

Review – A Brightness Long Ago by Guy Gavriel Kay

With Guy Gavriel Kay‘s latest novel, A Brightness Long Ago, he once again proves why he is an acclaimed writer in the fantasy realm. I’ve never actually read a novel by Kay before, though I’ve heard wonderful things about his works. I’ve had Tigana on my to-read list for at least a decade, but somehow never got to it or any of Kay’s other novels. That was clearly a BIG oversight on my part. Let’s talk about A Brightness Long Ago and why you should read it NOW!

I began A Brightness Long Ago and was IMMEDIATELY sucked into the writing.

It is stunning prose that evokes so much emotion, even without saying much.

A man no longer young in a large room at night. There are lanterns and lamps, torches in brackets, a handsome table, tall, shuttered windows, paintings in shadow on the walls. He is not alone. Even so, he finds his mind turning back to when he was, indeed, still young. We all do that. A scent carries us, a voice, a name, a person who reminds us of someone we knew…

There are events going forward in this moment, but there is also a delay, a pause in the rush of people coming and going, and the past is closer at night.

He is thinking of a story from when he was learning the world and his place in it. He cannot tell all the tale, and he won’t. We see only glimpses of history, even our own. It is not entirely ours—in memory, in writing it down, in hearing or in reading it. We can reclaim only part of the past. Sometimes it is enough…

After a beginning such as that, you almost don’t care what comes next, but of course you are dying to find out. Kay sets the stage for the tale to come, and occasionally brings us back out of the story to remind us of the viewpoint, the memories of our main protagonist.

The words evoke a nostalgia, even though it is not your own. You are immediately transported into the memories of Guidanio Cerra and feel as though they are your own reminiscences. The prose is woven beautifully amidst a deeply engaging tale of powerful players in a dangerous world. The world is reminiscent of early Renaissance Italy. If you are familiar with the time in which Leonardo da Vinci lived, you get a sense of the historical figures Kay is using as a reference and modeling into his own tale.

While A Brightness Long Ago is a reminiscent tale from one character, you can take lessons and meaning from his musings and apply them into your own past.

Reflections of love, destiny, ambition, power, and the overall winding path of your own life are wrenched from your soul as you submerge yourself into the reflections of cast of characters. At one point, Guidanio Cerra reflects that

“Some people mark you as they go by.”

The same can be said of books. And Kay’s latest is certainly one with the potential to mark you, as it has me. There are lessons to be learned, from a particular wisdom of sailors recurring throughout the book in varied forms to the introspective comments on the past and the choices made. The book also wades into politics and religion in a nuanced way with additional lessons, if you choose to see them. And through it all, there is an engaging story with intelligent women defining their own lives in a time where that isn’t common. And a story of rivalry and warfare, with horse races thrown in for good measure.

A Brightness Long Ago is available now from Berkley Publishing. Do yourself a favor and grab a copy to read and reread again and again. 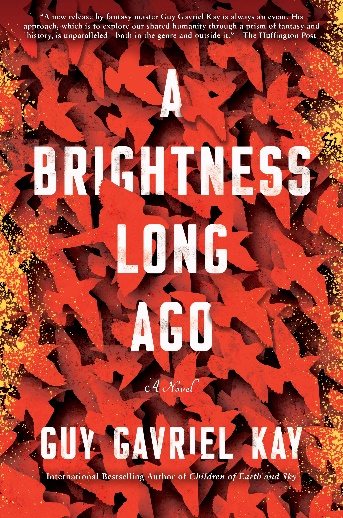 About the A Brightness Long Ago

In a chamber overlooking the nighttime waterways of a maritime city, a man looks back on his youth and the people who shaped his life. Danio Cerra’s intelligence won him entry to a renowned school even though he was only the son of a tailor. He took service at the court of a ruling count–and soon learned why that man was known as the Beast. Danio’s fate changed the moment he saw and recognized Adria Ripoli as she entered the count’s chambers one autumn night–intending to kill. Born to power, Adria had chosen, instead of a life of comfort, one of danger–and freedom. Which is how she encounters Danio in a perilous time and place.

Vivid figures share the unfolding story. Among them: a healer determined to defy her expected lot; a charming, frivolous son of immense wealth; a powerful religious leader more decadent than devout; and, affecting all these lives and many more, two larger-than-life mercenary commanders, lifelong adversaries, whose rivalry puts a world in the balance. A Brightness Long Ago offers both compelling drama and deeply moving reflections on the nature of memory, the choices we make in life, and the role played by the turning of Fortune’s wheel.

Guy Gavriel Kay is the international bestselling author of the Fionovar Tapestry series, Tigana, The Last Light of the Sun, Under Heaven, River of Stars, and Children of Earth and Sky. His works have been translated into more than twenty-five languages. He lives in Toronto, ON and can be found online at brightweavings.com and on Twitter @GuyGavrielKay.