Insidious 3 Trailer in 4D: The Next Stage in Horror?

Home/Conventions/Events, Reviews, TV & Movies/Insidious 3 Trailer in 4D: The Next Stage in Horror?
Previous Next

Insidious 3 Trailer in 4D: The Next Stage in Horror?

The horror movie genre may have taken the next step forward in its evolution with the marriage of well-produced thrill and a new form of technology. With the advent of Oculus Rift, the next generation virtual reality experience, immersive technology has moved into a realm beyond the average 3D movie. The combination of a headset that renders a 3D world for the viewer and headphones that block all sound but that of the virtual reality allows Oculus Rift to place the viewer more thoroughly into the rendered world than other technology to date. The folks behind Insidious Chapter 3, the next movie in the successful Insidious franchise, have taken that technology to the next level with their “Into the Further 4D Experience.” With a complete haunted house set-up within a single tractor trailer, they are able to bring this virtual world across the United States.

With the goal of allowing fans to actually go into the world of the movie, Into the Further combines the visual and auditory Oculus with the physical environment in a way that creates a more intense experience so that participants feel that that are actually inside a scene from the movie. The physical interactions create a more “real” feeling by engaging more of the senses.

I had the opportunity to experience this next stage of virtual reality in a new way this weekend at Chicago Comic and Entertainment Expo (C2E2). Fair warning: Below are spoilers describing what happens inside the “house” so if you don’t want to know, please stop reading here.

In small groups, participants are invited into the trailer where they walk down a long hallway decorated with key objects from the movies, including a set of dice on the table that fans will immediately recognize. The lights dim and the temperature shifts as participants begin to adjust to the new setting, setting the mood for the next portion of the experience. One at a time, participants are led into another section of the “house” where they are loaded into much smaller rooms to prepare them for the 4D portion. This includes instructions, but also further pulls the participant into the moment. After several minutes, participants are invited into another room where they sit in a chair while an assistant fits them with the Oculus headset. This is when the 4D really begins.

I will here refrain from telling you much else about it as I don’t want to spoil anything about the movie, but I will say that one of the primary characters is there with you, and the feeling that they are talking directly to you is well achieved. The experience takes place in 360 degrees, meaning you can see things happening on all sides if you look in those directions while wearing the headset. There is also a little surprise photo at the end. I know you want to see mine.

Before you ask: yes, I am dressed as Fluttershy from My Little Pony. She’s brave when she needs to be!

Overall it was a very thrilling experience. Though I could tell the images around me weren’t “real” it was still a thoroughly immersive situation, with sights and sounds and even physical world reactions to complement it. I completely enjoyed it.

What is most interesting to me about the Into the Further 4D Experience is that it marks a shift forward in movie promotion, particularly for the horror genre. The chance to actually step into the haunted house of the movie, and to be surrounded for a moment by that element is exciting, and not just on the level of the movie. Virtual reality could be the next step in horror entertainment in general, by allowing fans to walk through things they would normally only see on a movie screen.

I wasn’t the only staff member to take part in “Into the Further” though; Stewie went with me! I asked her a little about what she thought, and this is what she had to say.

What made you want to participate in the “Into the Further” 4D experience?
I love being scared – even though I don’t handle it very well. I wanted to prove to myself that I could do it, see what the new Insidious movie might be about, and of course see some really high quality technology in action.

Did you know what you were getting into when you decided to do it?
I did not. I learned slowly through chatting with the staff and Joanna that it was virtual reality meets haunted house. In fact, the fact that it was a non-traditional haunted house made it somehow more terrifying, because it was totally unknown what it would be like.

What was one thing that stood out to you about the experience? Any particular detail that you noticed?
The quality of the audio and video of the Occulus Rift is amazing, and truly beyond compare. Really, it’s a completely new direction that haunted houses could go in! Not only does it provide a unique scare experience, but the experience can be the same for everyone with little to no effort on the haunted house staff… but all the weight being placed on the quality of the technology instead. Kind of like Skynet Ghosts, so spoopy! It was a completely new experience, that is totally unparalleled to anything I’ve tried before!

Honesty time: were you scared? What was the scariest bit?
Very scared. I had to close my eyes through some of it. I was also in a tight corset, so my labored breathing was on the verge of making me faint. Note to self – don’t do the attraction in a corset! I would say I was most afraid when I was alone in the waiting room. The fact that it is a haunted attraction that you have to do alone makes it all the more terrifying that you can’t hide under the back of a friend’s hoodie. Before you begin the experience itself, they chase you into a 5 foot square room, surrounded by spooky objects, with a video screen playing scary images, while hearing scary sounds loudly all around you. I was beginning to forget how much time had passed, and my eyes were playing tricks on me! 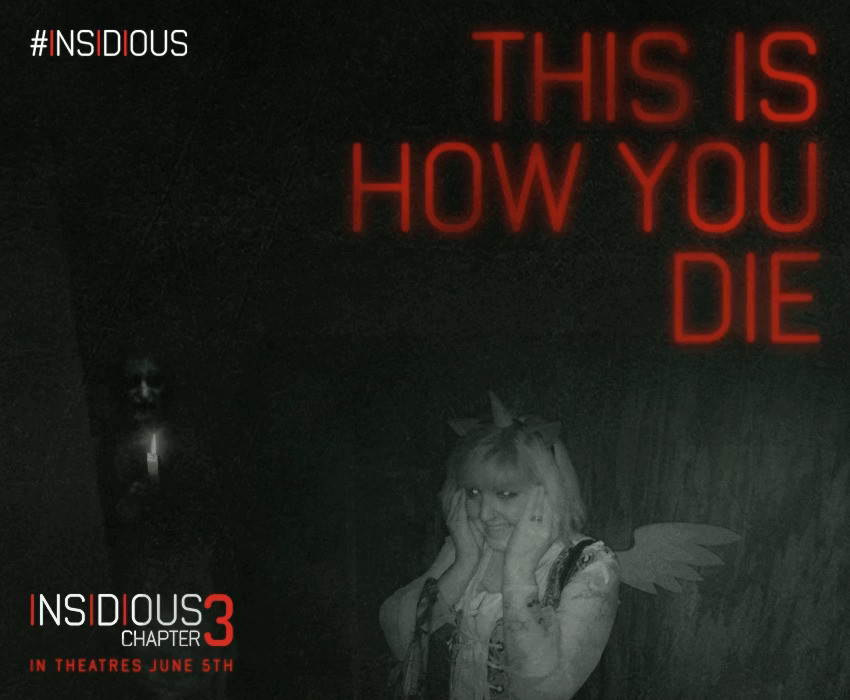 What did you think of the experience overall?
Amazing, and highly recommended. Whether you love being scared, haunted houses, scary movies, or incredible technology – it’s an overall sensory experience worth the wait. Totally unique, one-of-a-kind experience.

As a fan of horror, what is your impression of the new Insidious movie after this experience?
I loved the first and second movies, and I’m very excited for the third now. The teaser trailer experience did not seem to provide me any new clues about the movie, but that’s probably because I was pissing myself, crying like a little baby, and closing my eyes through parts of it.

Are you going to see Insidious Chapter 3 in June?
You bet, but more importantly, I look forward to more experiences like this one – haunted or not! I can’t wait to take my husband through a similar experience because I know he would love it!

The “Into the Further 4D Experience” is touring across the United States in anticipation of the June release for Insidious Chapter 3. To see if it is coming to a city near you, and to reserve free tickets, visit this page. Can’t make it to one of the host venues? The experience is going to be released as a downloadable app for both iOS and Android, viewable with a Google Cardboard virtual reality headset.