Anime Expo Lite brought us some really cool new manga releases to look forward to for this fall. TOKYOPOP and Kodansha Comics had some really interesting panels a couple of weeks ago and showcased some new titles for us to enjoy this year. Both publishers always seem to bring out series that have something for everyone, no matter what you’re into. 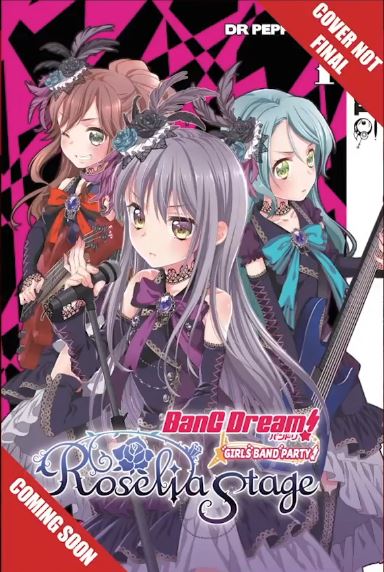 This series is about Minato Yukina who forms a band to fulfill some sort of past family regrets. If you enjoy series like Love Live or any other idol anime or manga, you might enjoy this one. This series actually was inspired by the success of Love Live. This manga will be released in August 2020 and is available for pre-order at Right Stuf Anime. 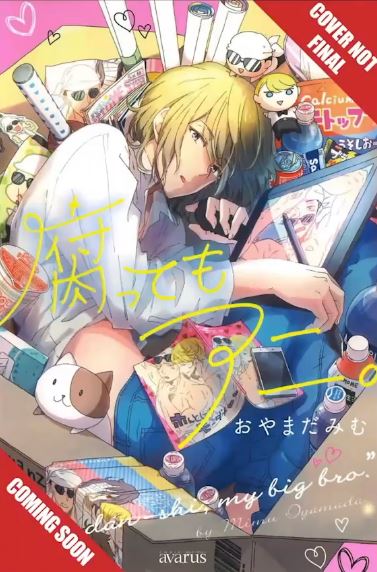 TOKYOPOP has been very big in LGBTQ+ representation in their manga, as well as highlighting creators of color. This title happens to be an indirect yaoi (boys’ love) story in which the main character is a boys love comic artist secretly. His sister happens to find out about his ventures and she offers to help sell his comics. If you’re interested in LGBTQ+ titles or enjoy yaoi, I would recommend giving this series a look. The release date isn’t confirmed yet but it is set to be published this year. 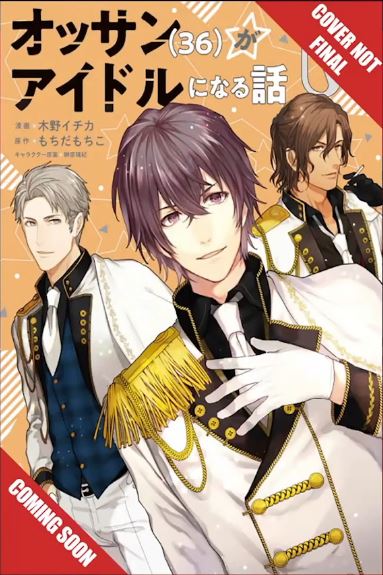 Ossan Idol! shows us that younger girls don’t have to be the only characters in idol stories. This particular idol manga series has boys as the main characters. After 36 year old Osaki Miroku plays a new online game called “Let’s Try Dancing!” to help combat his struggle with depression, he begins to see a change in his daily life. One day at a karaoke bar, he’s approached by the director of an entertainment company. This encounter changes his entire life, but makes him question if he’s too old to be an idol. You can pre-order this title now on Amazon (September 2020 release date).

The God and the Flightless Messenger 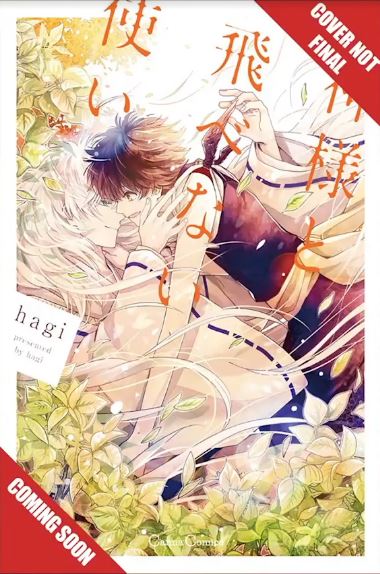 A messenger’s duty is to care for and protect the god they’ve been assigned to. In order to complete these tasks, such messengers require wings. Shin, however, can’t fly. His tiny, useless wings make him the target of ridicule and scorn among the other messengers and have kept him from being able to serve a god… until now. Determined to prove himself as a capable messenger despite his flightlessness, Shin accepts his assignment to a mysterious being on one of the nearby mountains. At first, it seems an easy task to keep his charge safe and happy — especially when the deity in question is just a cute, fluffy ball of fur. But things aren’t always what them seem. Recently, messengers flying over the strange god’s mountain have been disappearing. Even as suspicion mounts against his deity, Shin just can’t bring himself to think that such a gentle god could have a dark side. It’s strange, but for some reason… the mysterious, fluffy being feels so familiar to him.

This title is available for pre-order on Amazon right now (release date October 2020). 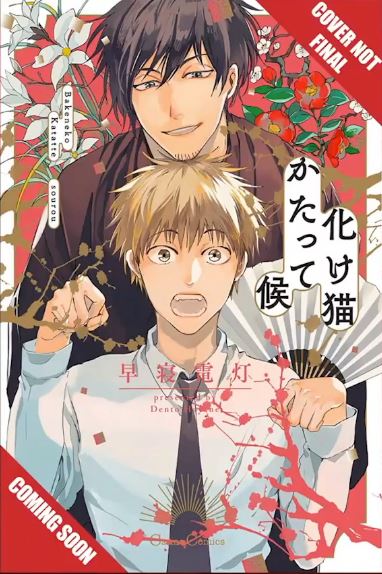 This is another boys love story about a physically and emotionally tired business man. After a long day at work he attends a koudan (traditional Japanese storytelling) and stumbles upon a human changing into a cat. At first he thinks it’s just his tired eyes playing tricks on him until he continues seeing it. Not only is this a boys love story, but it also pays homage to the supernatural genre, so if you’re into those you would probably enjoy this title.

For more LGBTQ+ friendly titles that are already published in digital and print you can visit TOKYOPOP’s website for their LOVE x LOVE imprint list!

Kodansha went a little more in depth during their panel and let us know about their summer, fall and spring 2021 titles at Anime Expo Lite this year. 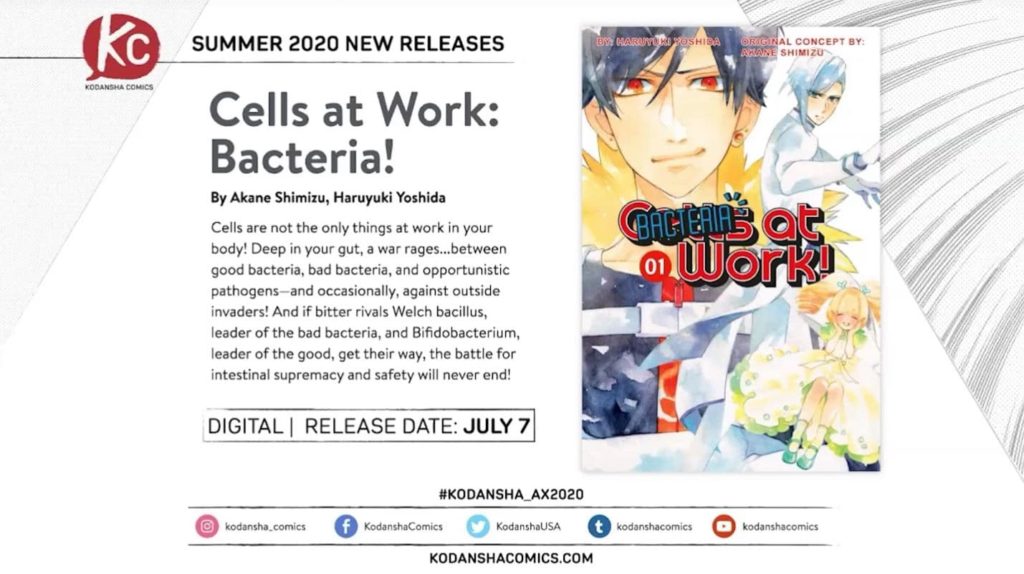 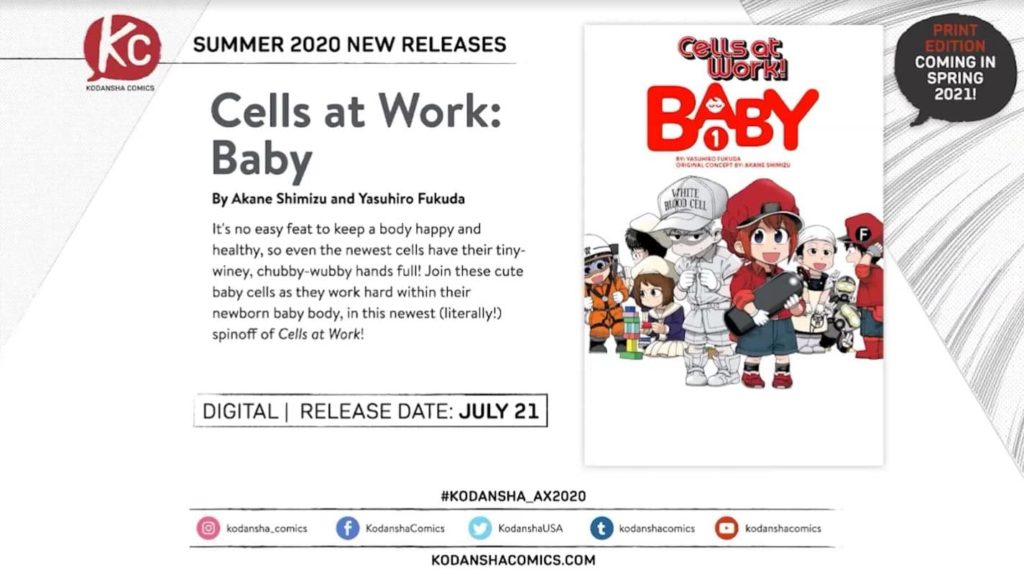 I haven’t yet watched the anime or read the manga series for Cells at Work, but from what I understand it’s about personified versions of everything going on inside your body. Think Axis Powers Hetalia but with white and red blood cells. From the previews I’ve seen of the anime, it looks like a lighthearted and funny series that’s worth looking into if you enjoyed Hetalia. 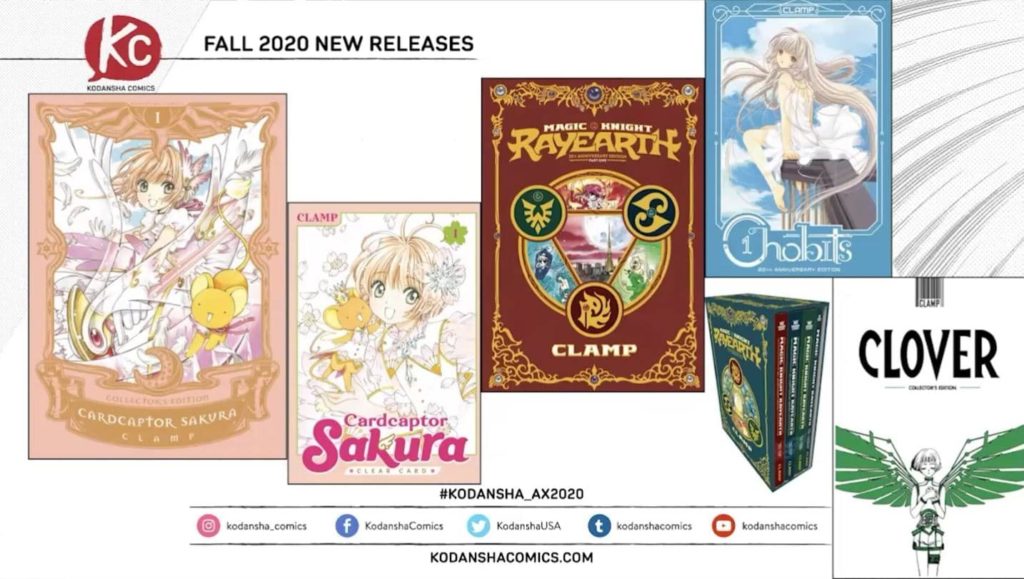 These titles aren’t brand new and most manga readers will know of these series already, but Kodansha is doing a few re-releases as well as continuing with the publishing of the Cardcaptor Sakura: Collectors Editions and Cardcaptor Sakura: Clear Card. Magic Knight Rayearth is getting a complete boxed set for the first season (including a re-printed edition of the rare art book). Chobits omnibus volumes are continuing, and Clover will be getting a re-release. Pictured below are some new titles for the fall. You can find these titles for purchase at RightStufAnime! 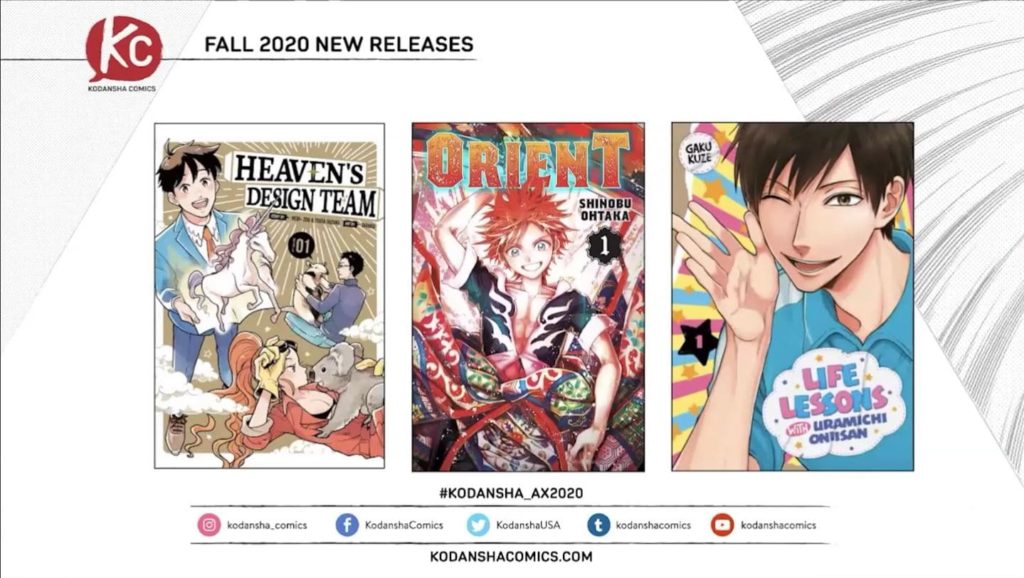 Heaven’s Design Team is a funny but educational series about animals and the story of creation, how God grew tired after the seventh day of creating the Earth so He outsourced the animals to an agency called “Heaven’s Design Team.” There is also an anime to go along with the manga that will be premiering in 2021. The manga is set to release in September. You can pre-order all four volumes from Penguin Random House now!

Orient is a period piece set in the Sengoku period of Japan where the country is ruled by demons. If you enjoy supernatural series, you may want to check out this anime. This title won’t release until January 2021, but you can still pre-order this title and the second volume from Penguin Random House.

Life Lessons with Uramichi Oniisan is a series about a cynical children’s television show host going through the motions of life. It’s available for pre-order from Penguin Random House. Blue Period tells the story of a studious straight-A high school student who wanders into the art room one day and gets immersed in creating art. This series releases in October and is available for pre-order at Penguin Random House.

The Witch and the Beast is “a dark fairytale set in a steampunk world of magic and monsters.” Fans of Cowboy Bebop and Fullmetal Alchemist will enjoy this story. You can pre-order all volumes at Penguin Random House. 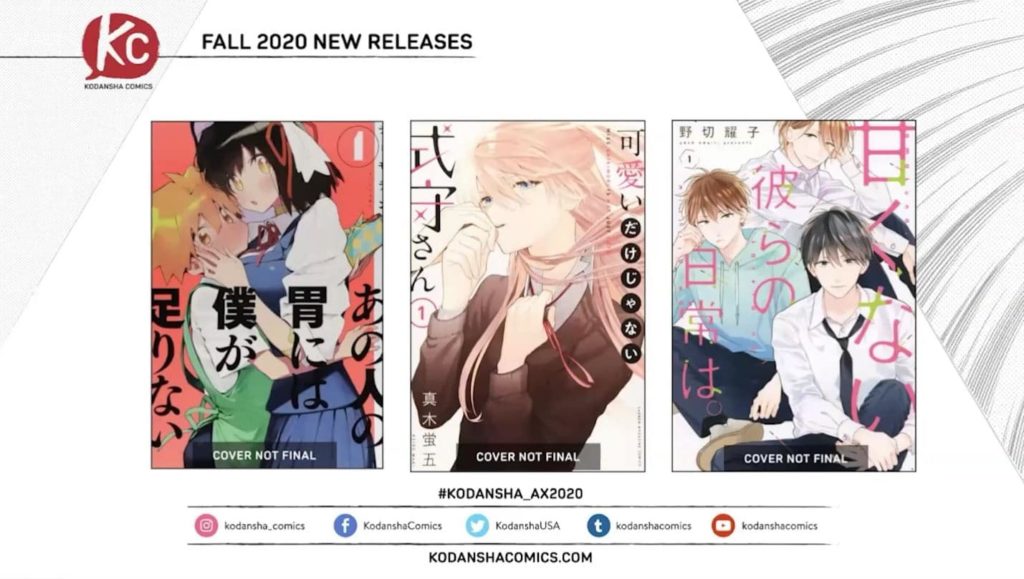 Makie’s a boy in love, with his tall, older classmate Sachi. As a sign of his affection, he makes Sachi a special lunch every day. Sachi loves Makie, too, but she has a secret… she’s actually a shapeshifting monster called a watari, and she was drawn to Makie because he smells…delicious! But it’s not just Sachi who’s drawn to Makie’s scent, and soon, he realizes the entire monster world is after him. Fortunately, Sachi’s a watari who eats watari, and she pledges to protect him. But how long can Makie survive, with Sachi’s appetite the only thing between him and a monster’s belly?

If you’re a fan of shoujo manga, you may want to pre-order this series.

Shikimori’s Not Just a Cutie tells a story of the daily life of a herbivore, unlucky boyfriend and his amazing and sometimes intimidating girlfriend. You can pre-order it now for October release from Penguin Random House.

Those Not So Sweet Boys depicts the dilemma Midori faces about getting a part-time job that’s frowned upon at her school. When her principal finds out, he makes a deal with her to convince three boys who have stopped attending school to come back. If they do, he won’t expel her from school. This series is for anyone who is a fan of shoujo romance. You can pre-order it at Penguin Random House for release in January. 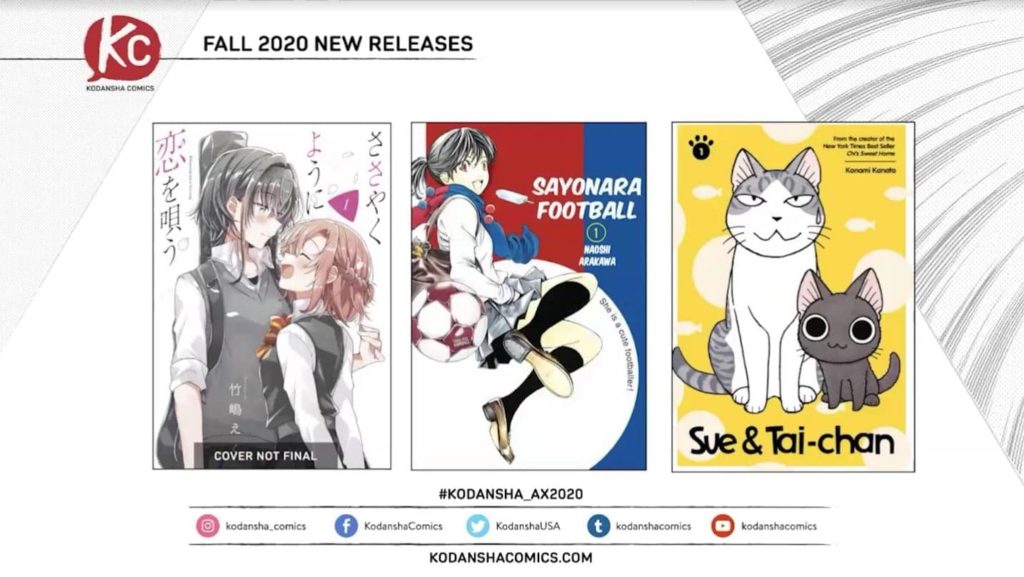 Whisper Me a Love Song is a yuri (girls love) story about a female musician who meets a fan at a concert. If you enjoy LGBTQ+ books, or just enjoy yuri manga be sure to pick up this title in September. You can pre-order it now at Penguin Random House.

Sayonara, Football is a girls sports manga set to release in August. If you enjoy soccer, this is a great series about high school rival soccer players. You can pre-order it at Penguin Random House now for August release.

Sue and Tai-Chan is for anyone who has enjoyed Chi’s Sweet Home or just loves cats. This looks to be a cute story about two house cats and their daily escapades. You can pre-order it at Penguin Random House for September release.

Finally, Kodansha gave us a sneak peek at some Spring 2021 releases. 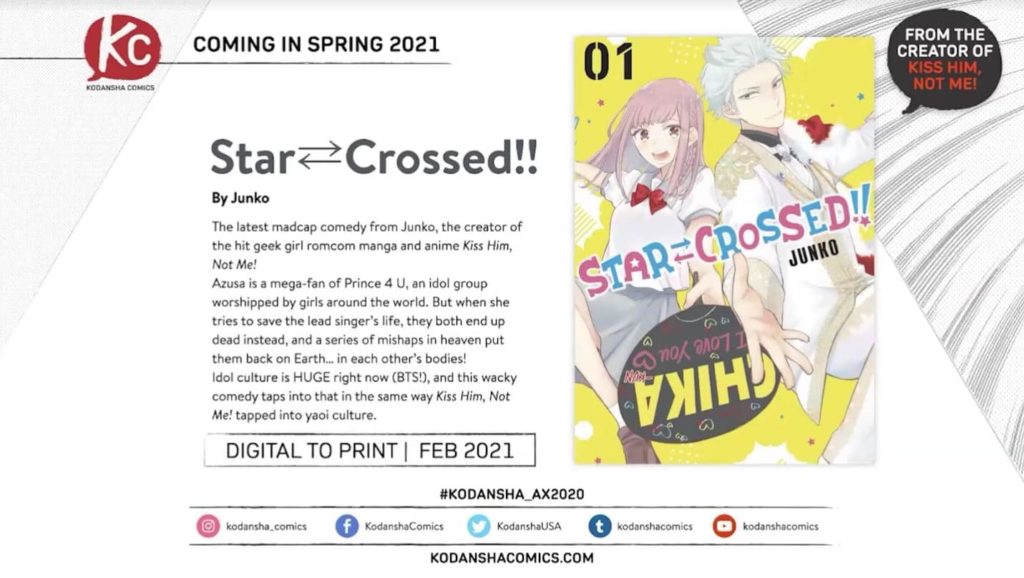 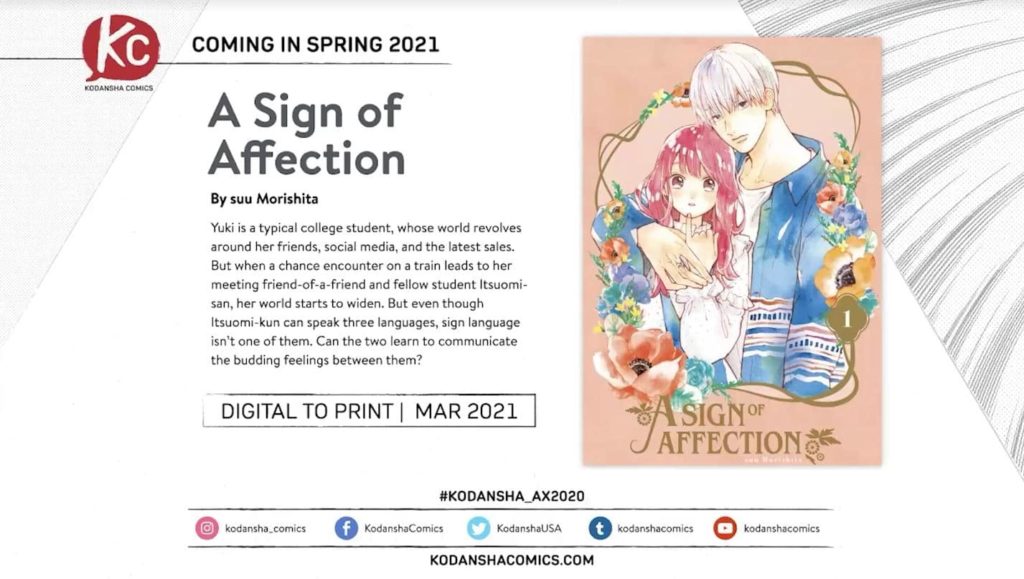 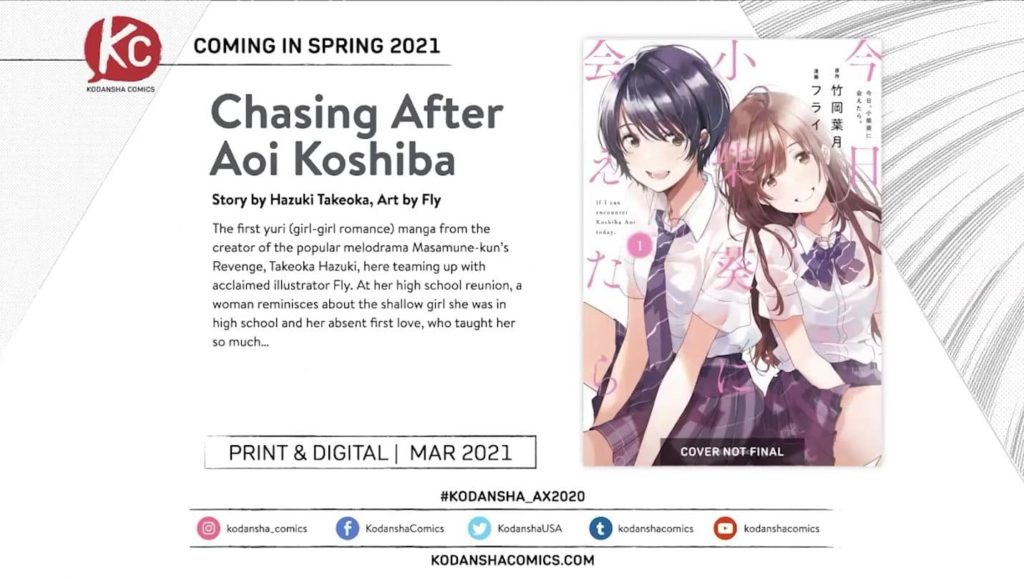 What manga are you looking forward to this fall or next spring? If you’re reading any manga or comic books this summer, don’t forget to include them in our Iggle Comics Summer Reading Challenge with the hashtag #igglecomicssumerreads! What mangas have you been reading lately?