All Disney movies seem to have a pattern: a girl, a love interest, a battle and a fall… but what really happened? Very few of these tales are Disney originals, but the Disney versions are sometimes so different than the original that you may not even recognize it.

We all love the Disney tales, the classics like Snow White, Sleeping Beauty and Cinderella, or the more recent Disney movies like Rapunzel. There’s something enchanting and magical about all these tales. Not only do they end up with happy endings, they are also brilliantly told and illustrated. There’s one other thing in common with these four, they were all originally Grimm’s tales. Due to the amount of information with each of these tales I’m going to break this into a few posts. Today let’s talk about one of my favourites: Snow White!

We all know the Disney version: Snow White is “the fairest of them all” and her evil Stepmother is jealous. In order to remain the fairest she orders the huntsman to take Snow into the woods and kill her, and he is told to bring back her heart as proof. When the huntsman takes her he can not kill her and instead tells her to run, bringing the heart of a boar back instead. Snow then finds the dwarfs in the woods, is convinced by an old lady to eat an apple, falls into a deep sleep and wakes at the kiss by her “true love”. Also in the Disney version the Queen falls off a Cliff (I’m sure you know the pattern here) and Snow goes off to live happily ever after.

Now, with that insanely condensed version, let’s look at the darker side of Snow White. First off I have to say Snow was never the brightest cookie, in the original the Queen didn’t try only once, she tried 3 times to kill Snow White. The Queen tries to kill her with a Bodice, a Poisoned Comb and then the Apple. Each time Snow opens the door to the Queen (despite the dwarfs telling her to open the door to NO ONE), dressed as an old peddler woman, then another old woman, then finally a peasant woman (with a stained face). I guess the Queen must have been a master of disguises to not be detected each time. But then again you have to look at Snow’s original age. In the Disney version Snow was meant to be in her teens, which seems acceptable, but in the original Grimm’s tale Snow was merely seven years old. Now keep that in mind about the rest of the differences.

Let’s start with the Queen. I have to say the Queen was very determined, although I think all the poison and suffocation seems too difficult when she could have done the job much easier, but that is the way of things. In the original version she actually ATE what she believed to be Snow’s Lungs and Liver… how twisted is that? Something else is that the Queen isn’t her Stepmother in the original Grimm’s fable. Nope, she’s her actual mother. It is believed that the Grimm brothers changed it to be her stepmother in one of the later versions because they decided that “mother” needed to be sacred. So that’s when the version changed to Snow’s mother dying in childbirth and her father remarrying a beautiful yet arrogant woman.

Now let’s look at the biggest change. In the Disney version everything is solved with True Love’s kiss. Well, Grimm wasn’t so sweet. Instead the Prince came to the Dwarfs cabin looking for a place to rest that night. Upon arriving he saw a beautiful woman at the top of a hill in a glass case. When he saw her he thought she was so beautiful he couldn’t stay away from her. He offers to buy her off of the Dwarfs, who refuse. He then asks them to give her to him as a gift because he couldn’t live a day without gazing upon her. They pity him and agree. From here I found two slight variations. The first is the Prince brings her back to the palace where she is moved with him from room to room. The servants get so frustrated carrying this giant heavy coffin, with a dead girl inside, everywhere in the palace that one finally opens the coffin and angrily picks up and drops the girl. This dislodges the piece of apple and she awakes (via the daily beast).  The other states that once the Dwarfs give the coffin to the prince, the servants started walking with the coffin and tripped over a shrub, dropping the coffin which dislodged the piece of apple (via genius.com). Either way, there was no kiss, there was a stumble or bump in each version that performed the same as a Heimlich maneuver and dislodged the piece of apple. Of course both have her waking to the prince who professes his love and they decide to marry right away (in some version it’s even the next day. I’m always impressed at how quickly they can put on a wedding when needed. Do they have people in the palace with weddings all planned to swoop in and get it done? But I digress). 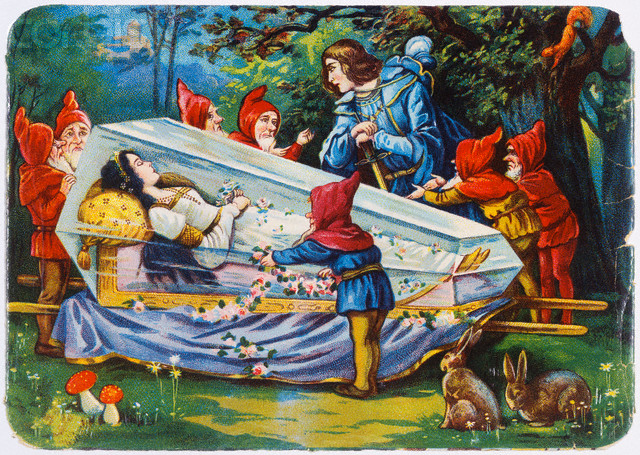 Let’s stop right there… scroll up and read her age….7. She was SEVEN years old, with 7 dwarfs and she is getting married to a prince. Now that I’m done my modern outrage at the fact that at one time it was normal for a 7 (or even 8, heck 10 would be bad enough) year old to get married to a prince, we can move on to the fate of the Queen. The Queen, of course, is invited to the wedding and upon getting ready asks the mirror that fated question. This time the mirror responds “You my queen are the fairest here, but the new queen is a thousand times more fair” (via genius.com). This spurs her to go to the wedding (which she wasn’t sure she was going to attend until her vanity got the better of her) where: “When she entered, Snow White recognized her right away. The queen was so terrified that she just stood there and couldn’t budge an inch. Iron slippers had already been heated up over a fire of coals. They were brought in with tongs and set right in front of her. She had to put on the red hot iron shoes and dance in them until she dropped to the ground dead.” (via genius.com)

Yup, they make her dance to death with red iron shoes. I thought that was a pretty gruesome death. Heck, it’s definitely more efficient than the three methods the Queen attempted on Snow. I never truly understood the purpose of this ending other than that people are cruel and equally vindictive back to those who wrong them. I’m not sure if the shoes or falling to your death is better but either way, Disney or Grimm, they both die. It leaves you with an awfully bleak idea of the “heroes” we keep thinking our Disney princesses to be. You can tell, in both versions, that Snow and the Prince planned the Queen’s fate when they sent her the invitation, so are they really better than she is?

Disney has turned the lessons of Snow White (don’t talk to strangers, don’t open the door to those you don’t know, beware of things you are given or buy) to a more simplistic version of, if you’re prettier than a queen run away until you can find your prince to save you. I do have to say I like the original (minus her age) much better, even though I’ve always been a huge Snow White fan.

What do you think? Did Disney make it better or worse?

Feature Image: Made by Angie/Sylvanfire from base images found at Fan Girls Are We, and NLS.

Angie, aka Sylvanfire, is a Canadian geeky mom who loves everything in the world of Geeks. At home she has a Studio Arts degree, but has always loved math just as much, and is currently raising two geek girls in training with her husband and miniature Dachshund "Tank". She pretty much loves anything superhero related and tends to write about products and collectibles to add to her imaginary collections. When she's not writing for the IGGLES you can find her ramblings on her blog "Sylvanfire's Geeky Corner" at http://sgeeky.blogspot.ca/ and you can also find her on Twitter @sylvanfire or through her public Facebook https://www.facebook.com/sylvanfirephotograph.