Are you a fan a vampires and the urban paranormal worlds filled with supernatural creatures? Do you hate starting a series in the middle and feeling like you’re behind? If you answered yes to one or both of those questions, then you’ll want to pick up Chloe Neill’s latest. She has returned to the world of the Chicagoland Vampires with the first in a brand-new series, Wild Hunger, available from Berkeley Publishing on August 14.

Last year, fans were sad when Blade Bound brought the end of Merit’s and Ethan’s adventures. I’ll be honest, I wasn’t one of them. I never read all the Chicagoland Vampire series. I read the first four or five, but I wasn’t a fan of the decision to bring a certain character back to life. Even the Chicago setting didn’t keep me reading. Given the trajectory of the series, I can’t fault the decision. Ultimately, Ethan and Merit are just not an OTP (One True pair) for me. And that’s okay!  Not every series is for everyone, and it’s important to remember that every series is different. Wild Hunger is the first in a new series, though, so I gave it a read.

I enjoyed Wild Hunger. I didn’t find it groundbreaking or particularly earth-shattering, but it’s a great entry into the urban paranormal fantasy genre. There are vampires and shifters and intrigue between species and hints of budding romance. Always the romance. That telegraphed romance may be why I enjoyed Wild Hunger more than the series it grew out of – the romance seems more natural and not built on a power differential and forced allegiance. I think I also identified more with Elisa than I ever did with her mother, Merit. Elisa is making her own way, despite her lineage. She’s also dealing with her own demons.

There are references to events in the Chicagoland Vampire series (after all that’s how Elisa Sullivan came to be), but you don’t have to have read those books to enjoy Wild Hunger. There’s enough background for you to know what you need to know, even if some of the main characters are tied directly to the Chicagoland Vampires. This book is entirely about the next generation. In addition to Elisa and Connor, there is Lulu. Lulu is the daughter of a close friend of Merit’s and she is an amazing addition to the cast of characters. She is an artist avoiding her own heritage out of fear, and she too is making her own way in the world. One of my favorite quotes in the book is attributed to her:

“I’m…determined,” [Lulu] said. “I think sometimes that’s more important. Just putting a little bit our there, every day. You do the work or you don’t. The externalities don’t really matter.”

This is a great reminder to all of us, and I think it will apply to all the characters in the Heirs of Chicagoland, one way or another. Wild Hunger is an entertaining, quick read that serves as an easy entry point into a well-defined world. 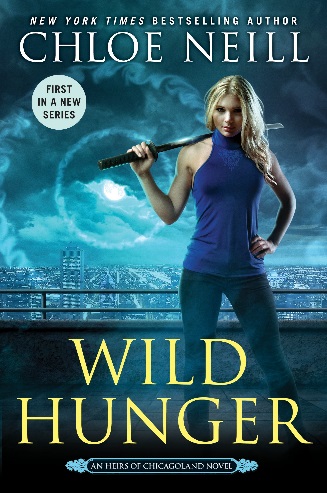 In the first thrilling installment of Chloe Neill’s spin-off to the New York Times bestselling Chicagoland Vampires series, a new vampire will find out just how deep blood ties run.

As the only vampire child ever born, some believed Elisa Sullivan had all the luck. But the magic that helped bring her into the world left her with a dark secret. Shifter Connor Keene, the only son of North American Central Pack Apex Gabriel Keene, is the only one she trusts with it. But she’s a vampire and the daughter of a Master and a Sentinel, and he’s prince of the Pack and its future king.

When the assassination of a diplomat brings old feuds to the fore again, Elisa and Connor must choose between love and family, between honor and obligation, before Chicago disappears forever. In Wild Hunger, Elisa will find out just how deep blood ties run.

Chloe Neill was born and raised in the South, but now makes her home in the Midwest. She is the New York Times bestselling author of the Chicagoland Vampires series, the Heirs of Chicagoland series, the Dark Elite series, and the Devil’s Isle series. Learn more about Chloe and her other books at  http://www.chloeneill.com/

Wild Hunger is available from Berkeley Publishing on August 14. But you can win a copy now!
Wild Hunger Giveaway