In 1952, Sparrow Hill Road was the site of Rose Marshall’s death. Rose has been walking the ghost roads ever since and she’s been called a lot of things: the Phantom Prom Day, the Girl in the Diner, and the Spirit of Sparrow Hill Road.  The tales that comprise Sparrow Hill Road, written by Seanan McGuire, were originally released as a series of short stories in published through The Edge of Propinquity, from January through December of 2010.  Those stories were collected, reworked, and released as a novel  in 2014.  DAW Books released a new redesigned paperback on June 5, 2018 in advance of the next book in the series, The Girl In the Green Silk Gown.

I’m familiar with Seanan McGuire’s work through October Daye.  The October Daye series follow the adventures of October “Toby” Daye as she tries to find her footing in a world that seems a little more interested in killing her than she’d like. I’ve always enjoyed the detailed, complicated, brilliant;y frightening fae world running around San Francisco (and elsewhere). So I was interested to see what type of mythology McGuire would build around ghost stories.

Sparrow Hill Road takes classic urban legends of varying ghost stories and provides context and “truth” to them. She builds a new mythology of the American Ghost Roads and those that inhabit and interact with them. In some ways, Sparrow Hill Road feels like American Gods in that it is taking familiar sources and providing a new context to pull it all together. It’s a new Americana mythology built on our love of roads and cars. It gives you pause to think about our crumbling infrastructure and how that will impact the roads, daylight and otherwise, in the future.

It’s a fast, easy read for these summer months. And I highly recommend it, especially if you’re looking for some additional variations and new ghost stories to tell around the campfire at this years IGGPPC Camp, do yourself a favor and pick up Sparrow Hill Road. It does begin a little slow and feels more like collected short stories (which is the origin) than a cohesive building tale, but a quarter of the way in the cohesiveness flow improves as the stories began to be tied together more appropriately. I know I’m looking forward to The Girl in the Green Silk Gown (DAW Books, July 17, 2018) to learn more about Rose and her path on or off the ghost roads. And I’m hoping we’ll learn more about the ambulomancers, the umbramancers, the routewitches, the crossroads ghosts and guardians and more.  Sparrow Hill Road is available now (and you can try to win a copy too)! 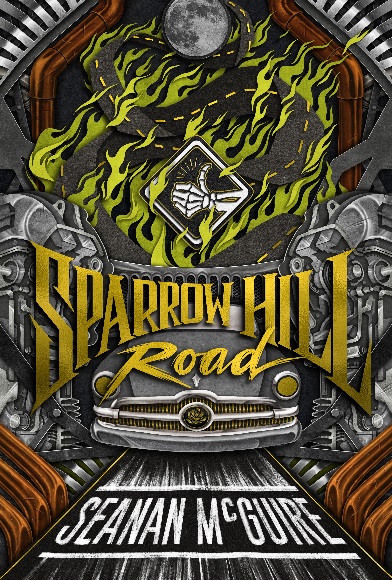 Rose Marshall died in Buckley Township, Michigan in 1952 but has been traveling the highways and by-ways of America ever since. She is the darling of the truck stops and the angel of the overpass—she’s also on the run from Bobby Cross, a man who sold his soul to live forever. Bobby had intended to use Rose’s death to pay for his immortality, but he didn’t bargain that she would be so good at eluding him, and he has been chasing her ever since. After almost sixty years of running, Rose is ready for her freedom and prepared to do anything to win it back.

Seanan McGuire was the winner of the 2010 John W. Campbell Award for Best New Writer and the author of the New York Times bestselling October Daye and InCryptid series. She has won a Hugo Award the SF Squeecast podcast and is the first person to be nominated for five Hugos in a single year. Visit her online at www.seananmcguire.com and on Twitter @seananmcguire.