An interview with Christina Henry, author of Lost Boy: The True Story of Peter Pan

An interview with Christina Henry, author of Lost Boy: The True Story of Peter Pan

At San Diego Comic-Con, I had the opportunity to interview Christina Henry, author of Lost Boy: The True Story of Peter Pan. Lost Boy is Christina Henry’s answer to why Captain Hook hates Peter Pan and how that hatred came to be. Christina has also written the national bestselling Black Wings series and the two Chronicles of Alice books, Alice and Red Queen. Christina lives in Chicago and runs a lot. We talked a lot about books and a even more about running.

A little about Christina

Well, I’m more comfortable talking about my books than I am myself. I live in Chicago. I run marathons. I hate the treadmill. Outside has more variety.

At this point, we digressed to talk about running as I’m beginning to train for my first marathon. We talked extensively about pacing on treadmills (which is unnatural; “nobody runs like a metronome”) versus pacing while running outdoors. Christina ran cross-country in high school and then took running back up after her son was born. It was running that helped motivate her to write her first book. After she ran her first full marathon, she wrote her first book in six weeks.

She likened marathon training to the writing process. “The time and build-up it takes to run a marathon is the same as writing…write a little every day and it builds up…its the same with marathon training. You have to think about the long haul, but also the little bit just in front of you.”

We also talked about the Chicago Cubs. Anthony Rizzo is her favorite player on the Cubs. And not just because he’s a great ball player. She explained how she appreciates the work Rizzo does with kids’ cancer charities in Chicago, including his own foundation.

Christina and I talked a bit about her writing process. I was fascinated to learn that she writes by hand and writes chronologically.

“I don’t really outline and plot ahead. My subconscious does 90% of the work. Not conscious way. A lot of times when I’m writing, I’m just as surprised as anybody.”

Christina also told me about her inspiration for Lost Boy. She said it came about in really concrete way six years ago. At the time, her son was five and obsessed with Peter Pan. Like most young children, for a time, Peter Pan was all he wanted to read or watch.  With all the repeat viewings, Christina started to wonder.

“Why does Captain Hook hate this kid so much? Does this even make sense? He’s an adult. He’s a pirate. Doesn’t he want to go places and do things?”

She kept thinking about why his hatred is so corrosive and kept it in the back of her mind for 6 years. She decided she wanted the answers and began a story that see Hook as one of Peter’s lost boys who ended up growing up and souring the relationship. Having a son, she was witness to the interesting relationships boys can form. They can be brutal with each other, but there is also a “beautiful tenderness.” Lost Boy explores those relationships among boys.

Christina also told me she reads a lot of non-fiction, Angela Carter, Daphne du Maurier, Ray Bradbury, Stephen King, and pretty much everything as a non discriminatory reader.

Next up. Upcoming book.

I just finished edits on my next book, The Mermaid. It’s about PT Barnum and the Fiji mermaid, but the mermaid is real and not a hoax. It’s a very different book. There are no bodies and no large action scenes; no blood and horror. It’s a book about relationships and about feeling alien in a human society. It’s about grief and loss and a lot of other things. It should be released in Summer 2018.

I’m certainly excited to read her next book after that description. She also said she hopes to run the Walt Disney World Marathon at some point as her final full marathon.  Writing and running – that seems like a full plate to me. 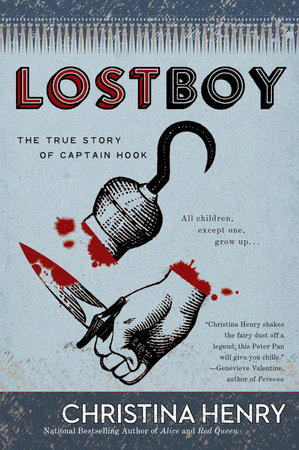 LOST BOY is both a prequel and reboot of Peter Pan that gives readers insight into how the loathed Captain Hook became the nemesis of the “boy who wouldn’t grow up.” But instead of following in J.M. Barrie’s footsteps, Henry takes the tale in a bold new direction that posits: What if Peter was the real sociopath all along? In Henry’s vision, Neverland becomes more of a prison than an escape for the boys Peter woos with promises of eternal youth and freedom. It’s daring and riveting— imagine Peter Pan meets Lord of the Flies.

Lost Boy is now available for purchase! You can pick it up here, and let us know if you give it a read!