Home/Gaming, Inside The Theme/5 Tabletop Games For Space Lovers
Previous Next

With this month’s theme being all about space, aliens, and the universe, I wanted to share some fun and diverse tabletop games that are great for space lovers. 1. Cosmic Encounter is a game where your mission is to colonize the galaxy as your own alien race. Players race to be the first alien race to colonize five planets outside of their native system, and will have to negotiate, partner, or war to get what they need. The game comes with 50 different races to play as, which each have their own special abilities that can aid players to victory. As you can see from the above photo, the board and play is stunning. The game also has variants to keep the game original and gives it extra play-ability. 2. Star Fluxx is a variant of the card game Fluxx, the game of ever-changing rules. The objective of the game is simple; get cards that complete the goal of the game. Sounds simple enough, right? Well, it’s not, because the goal and the rules of play are constantly changing with each player’s turn. Star Fluxx takes the concept of Fluxx and rockets it into space, with cards that reference some of our favorite Sci-Fi media, like Firefly and Star Trek. This game is chaotic and hilarious, and can be played again and again without getting old. 3. The Captain is Dead starts just as you think it does, with your captain dead. It is a cooperative game where you all work together to save your ship from aliens trying to takeover. All you need to do is get the Jump Core back online which seems simple, right? Wrong! With aliens boarding your ship and constant failing systems across the ship, you and your crew have to work together to win together, or die trying. Every crew member has special skills and abilities to help the team win, if used wisely. However, you’re fighting off hostile aliens, keeping the ship stable, and trying to complete your objective, so dividing the crew can hurt and help you. This game will keep you engaged till the very last second and playing till you beat the alien takeover.

4. Galaxy Trucker is all about making the best spaceship, but under a time limit and with limited supplies. You all play as Truckers in space, delivering materials through the dangerous regions of the galaxy. You will rummage for parts to build the best ship you can, and then travel the cosmos avoiding meteors, smugglers, and space pirates. You want to be the first ship to deliver and be the most intact after the journey. Will you be the richest trucker this side of the Milky Way, or in debt for the rest of your days? 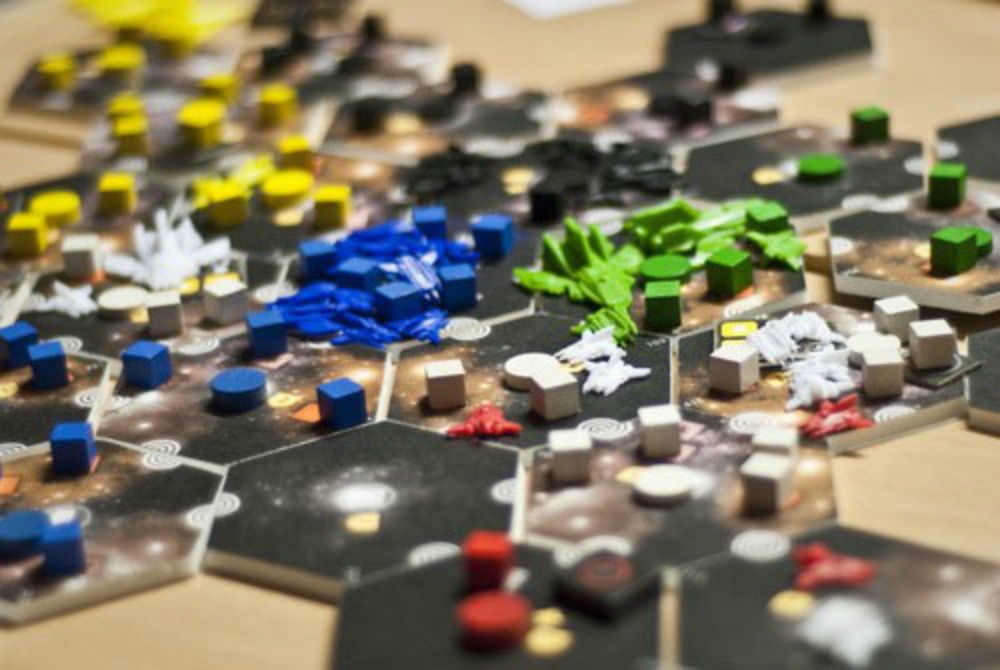 5. In Eclipse: The Board Game, you are trying to colonize the galaxy and dominate the universe. As the tagline says, you will explore, expand, exploit, and exterminate your foes until you are the dominate race. This game is pretty complex, so it’s probably not for beginners. But if you like a challenge, then go for it. While you colonize all of space, you will have to upgrade your ship and make some trades, or fight your way to glory.

Which space adventure do you want to take? Leave a comment below!

About the Author: Michelle Anneliese

Michelle writes stuff for the internet. She's a Ravenclaw from District 13 who can be found playing tabletop games in herfree time. Her patronus is a phoenix and she really wants an Owlbear. You can read more of her work at http://ageekgirlsguide.com