Dungeons and Dragons has taken the world by storm in recent years; from critically-acclaimed video streams such as Critical Role to well-known podcasts such as Dragon Talk. D&D has spilled over into the mainstream in previously unprecedented ways. This Dungeons & Dragons Primer is intended to help you get started!

Over the next few posts in this series, we’re going to talk about what D&D is, how to get involved, how to create a character, how to deal with issues at the table, and even how to start your own game as a Dungeon Master.

Dungeons & Dragons is a tabletop roleplaying game, and is considered by many gamers to be the beginning of RPG’s as we know them. D&D is designed to engage the player by allowing them to assume an alter-ego of their choosing within predefined parameters. The game also encourages problem-solving and being a team-player throughout the telling of a story in which their character is a major player. A dungeon master directs the story, helping provide the characters with plot hooks and twists to keep them engaged and using their imagination throughout the time spent around the table. There are a variety of game styles available to those interested in becoming a player character or dungeon master, whether you prefer roll-play or role-play at the table.

Dungeons and Dragons was first published in 1974. The creators – Gary Gygax and Dave Arneson – took wargaming to an entirely new level with the creation of the first D&D ruleset. Today, there are a variety of versions in use. The most recent of these is known as 5th edition, and this version is widely regarded as the most accessible to new players.

Using a variety of dice, players take actions, make ability checks, and deal damage to foes they encounter along the way. The actions and abilities that are available to a player are determined by their chosen race, class, and level. 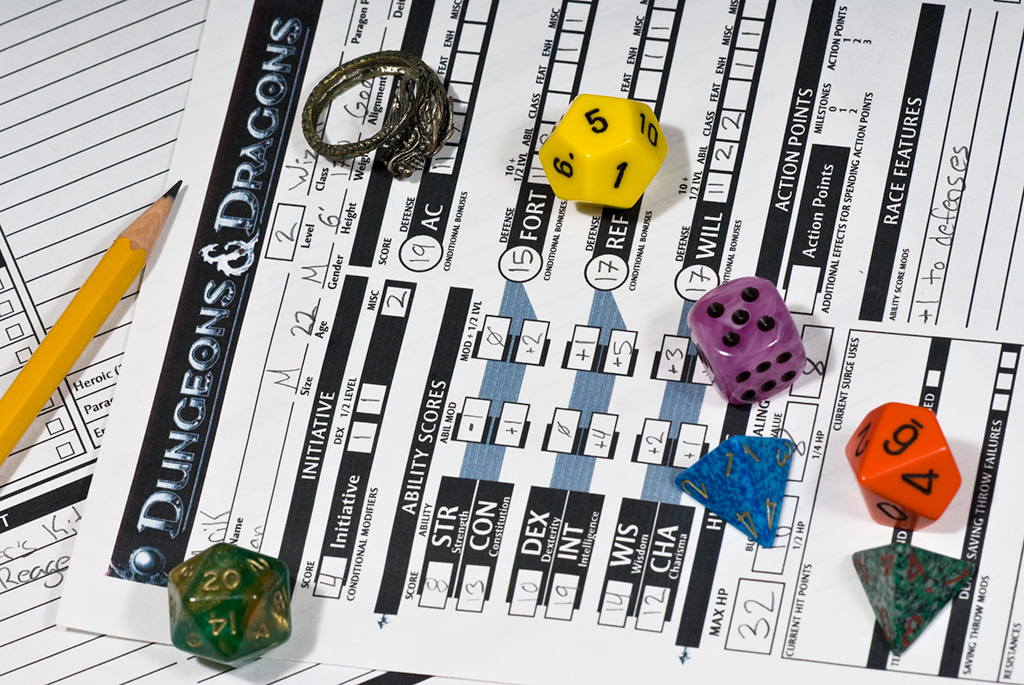 How do I get involved?

With the popularity of the game continually growing, finding a group to play with has never been easier. A variety of online platforms, such as Roll20, offer access to games from anywhere. You can search for a group directly on the site, choosing one that fits your schedule. Roll20 and other similar platforms offer a wide variety of tabletop-style games, it is not just limited to Dungeons & Dragons. If you are interested in RPG’s in general, you have many to choose from!

Finding in-person games can be more difficult, but not impossible. Many libraries host games, as do game stores and comic shops. You can also check Reddit for local games that are searching for new players. Craigslist can also be a good source, though always use common sense when joining a live game with people you don’t know!

What do I need to know before my first game?

That will depend a lot on the group you join. They should be upfront about their expectations of new players and what they expect you to have prepared or on hand before your first session. There are many groups who cater toward teaching new players and creating an inclusive and friendly community to support those players. Scratticus Academy is one such community who makes it their goal to provide a welcoming and safe space for D&D players, whether it is their first game or their 500th.

If you can, having access to the Player’s Handbook and a set of dice will give you a leg up on getting prepared to create your first character and step into the world of role-playing.

Stay tuned: next time in the Dungeons & Dragons Primer, we will talk about creating your first character!

Have questions about D&D? Feel free to reach out or comment below!